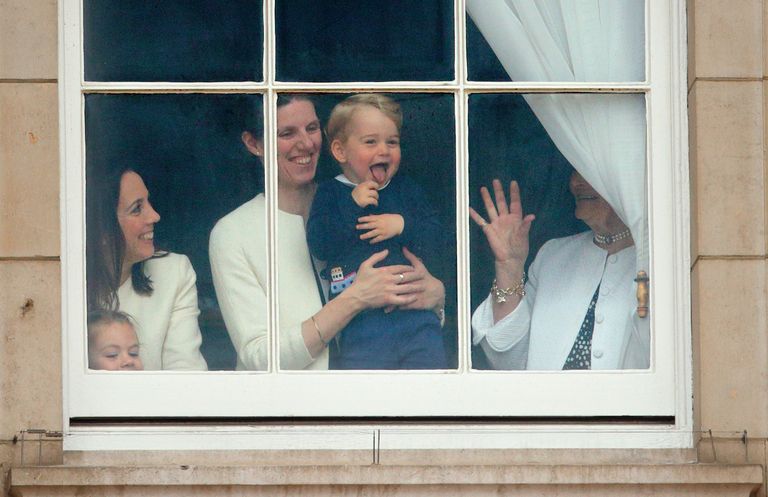 Prince William and Kate Middleton now have three children, and if you think it’s a full-time job to stop the royal kids from running around the Palace, knocking over crown jewels, and locking each other in the Tower of London during mischievous games of hide-and-seek, well, you’re probably right! (OK, not the Tower of London because it’s on a different part of London, but Kensington Palace is definitely big enough that Prince George could lock a playdate in a basement somewhere for a while without anyone noticing.)

So to help with their childcare, Wills and KMid have a full-time nanny, Maria Teresa Turrion Borrallo, who attended one of the most exclusive nanny schools in the world. Here’s everything you need to know about her:

At first, William and Kate said they didn’t want a nanny.

In 2013, when Prince George was born, Wills and KMid hired one of Queen Elizabeth’s former housemaids to help out with walking the dog, doing laundry, running errands, etc., but eventually they did decide they wanted full-time help ahead of their return to royal duties. First, they hired William’s old nanny Jessie Webb as a temporary fix — Webb came out of retirement for the gig, aged 72, and never planned to return to the palace permanently. So the couple then hired Turrion Borrallo, a Spanish-born 40something with tons of nannying experience. She’s been with the family ever since, and now cares for Princess Charlotte and baby Prince Louis too.

She lives with the royal family at Kensington Palace.

Which means she technically lives on the same “compound” as Prince Harry and Meghan Markle too.

And travels with the family on royal excursions.

Royal nannies often travel on international trips with the families they work for. Turrion Borrallo, went with the entire fam on their royal excursion in Canada in 2016. She also went to Poland and Germany in 2017, and their trip to Australia in 2014.

Turrion Borrallo, who was trained at the prestigious Norland School for nannies, is trained in self defense, anti-terrorism techniques, as well as defensive driving, for when she needs to take the royal children somewhere. Another student from the school, Hannah Brown, told The Telegraph they’d go “skid pan” training, which is a circular area that’s intentionally made to be slippery so drivers can test a vehicle’s capabilities. Here’s what that looks like:

“The nannies are taught everything from defensive driving to security issues to how to care for a future king or queen,” royal commentator Victoria Murphy told ABC News. “So [Turrion Borrallo] just really knows everything that you could possibly need to know about bringing up a child.”

The Norland School is one of the only schools of its kind in England.

Located in Bath, the school takes about 90 students per class. The degree takes four years to complete (the fourth year is a placement with a family). Students earn both a degree in child studies backed by the University of Gloucestershire and a Norland diploma. It costs about $19,000 dollars per year to study there.

Graduates of the Norland School go on to work for some of the most prestigious families in the world.

Norland School graduates end up with an average of six job offers each, vice principal Mandy Donaldson told Business Insider UK, and many of them go on to work for high-profile families. Aside from Will and Kate, Norland nannies in the past have worked for diplomats, oligarchs and rockstars.

Prince George and Princess Charlotte are reportedly learning Spanish from their nanny. When he was still just a preschooler, George could reportedly count to ten already.

Onlookers were very confused by Turrion Borrallo’s all-brown getup at Pippa Middleton’s wedding and Princess Charlotte’s christening, but this is the uniform given to graduates of the Norland school.

While they attend the school, nannies-in-training wear minimal makeup and have to wear their hair up. They’re allowed one pair of stud earrings and they can only wear felt lace-up shoes. The uniform was originally introduced to distinguish nannies from housemaids, but students aren’t obligated to wear it outside of school. They can if they wish for special occasions, however, like Turrion Borrallo did in the photo above.

She has great taste in baby clothes.

When Princess Charlotte made her debut to the world outside the Lindo wing in 2015, she was wearing a cream bonnet, handmade from Spain. Spanish media outlets reported that it was her nanny who gave it to her.

A principal at the Norland school said that experienced nannies living and working in London can make about £75,000 a year, which is over $100,000.