Fifty years ago, in April 1969, I ran my first road race, and it was no local fun run or 5K. I decided to run the biggest road race there was: the Boston Marathon. I had no idea if I could finish the 26.2-mile grind, but I thought I should at least give myself a big challenge.

I chose Boston in part because I didn’t know any better, and mostly because the world of running was very different back then. There were few runners and fewer races — only a handful of marathons across the country.

Back then, Boston did not require runners to meet a qualifying standard. I was 34, and to run Boston you only had to send the race organizers $2 and a physician’s letter stating that you were healthy enough to run 26.2 miles. Since my longest training run had been 13 miles, I’m not sure how my doctor established my readiness, but he did.

I had begun running less than a year earlier. In April 1968, I was a part of a small group that started New York magazine in a fourth-floor walk-up on 32nd Street, with writers such as Tom Wolfe, Jimmy Breslin and Gloria Steinem.

We all put in long hours and six- or seven-day work weeks. Because of the late nights and too much junk food, I soon had to let my belt out a notch or two. That’s when I decided to start running, something I had not done since college.

Each day, with stopwatch in hand, I ran around the block as fast as I could. Back home, I recorded my time in a diary. The next day, I tried to run faster. The entire workout took less than four minutes. 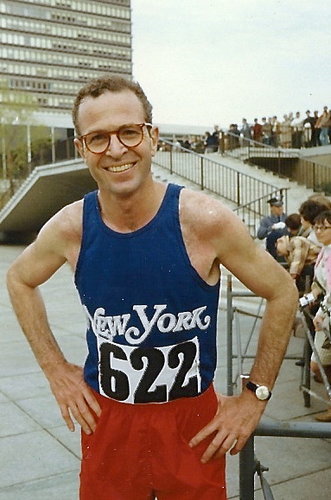 One morning, I encountered a rare site: another runner. He was moving much slower than I was, but he explained that he was a long-distance runner who ran a half-dozen miles or more at a time. This was an entirely new concept to me.

His name was Vince Chiappetta, and we soon began getting together for easy-pace runs. He told me he was president of something called the New York Road Runners Club (I would eventually be the organization’s chairman). He said he and several other club members ran the Boston Marathon every spring. In fact, he claimed that normal people like me could run Boston. He encouraged me to think about it.

I was skeptical but got advice from two writers at Sports Illustrated who finished the 1968 Boston Marathon and who eagerly shared their expertise and enthusiasm with me, including a letter with instructions for a prerace breakfast: a bowl of oatmeal, an English muffin and a stack of pancakes washed down with orange juice and coffee.

There was also this cautionary note:

“When you drive out to the start at Hopkinton, do not drive over the actual course,” Walt Bingham and Andy Crichton wrote. “If you do, you will not want to return by foot.”

Several weeks before the marathon, I called a mail order running outlet in Wellesley, Mass., to order a pair of Onitsuka Tiger Marathons, shoes with soles so thin you could step on a dime and tell “heads” from “tails.” I was ready, or so I hoped.

Still, that Monday morning in Hopkinton seemed to last forever. The race began at noon, and at the starting area, as I milled about with more than 1,000 runners, I felt my anxiety rise. Finally, the starter’s pistol sent us on our way.

The early miles seemed easy; they are mostly downhill at Boston. After the halfway point, I was in uncharted territory, farther than I had ever run before. What had I gotten myself into? Why hadn’t I trained more?

Boston has four infamous hills between 16 and 21 miles, just where you don’t need them. The last is the dreaded Heartbreak Hill. I trudged up the first three, fearful about Heartbreak just ahead. 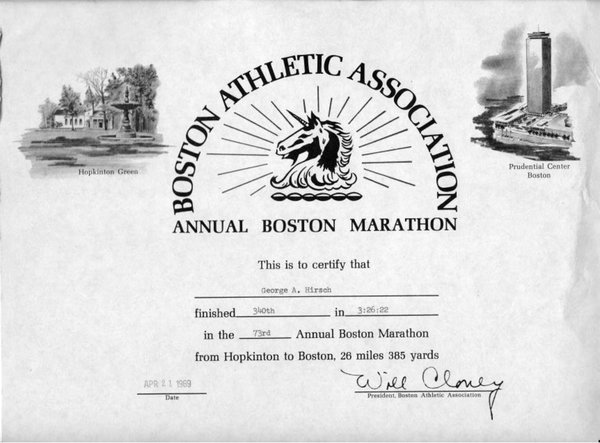 Then I was on it, leaning steeply into the slope. Near the top, I heard a police officer on a bullhorn exhorting the runners. Suddenly, he was speaking directly to me: “No. 622, at the crest of the hill, you have five miles to go, and it’s all downhill.”

I’ll never forget his next words: “Your achievement is superb and you have my fullest admiration.”

I knew then that I would finish the Boston Marathon. And tears welled up in my eyes.

The next evening, back in New York, I attended a dinner party. When someone said, “George ran the Boston Marathon yesterday,” all other conversation seemed to stop.

David Susskind, the television talk-show host, started peppering me for more information. An hour later, as the party was breaking up, he had one last question for me: “George, do you know anyone else who ran yesterday and is a good talker?”

Several nights later, I was on his show with Chiappetta, Crichton and a New Jersey cardiologist named George Sheehan.

“Tonight’s guests all ran the Boston Marathon this week, all 22 miles of it,” Susskind said, and none of us corrected him about the distance.

I have run a number of Bostons over the years, but this year my plans included running the accompanying 5K in downtown Boston on Saturday morning. Come Monday, I’ll be following the marathon closely — the winners, the midpack runners and the women, who now make up nearly 50 percent of the field compared with the handful who ran unofficially in 1969.

I would advise them to skip the pancakes on marathon morning.

George A. Hirsch, chairman of New York Road Runners, is the founding publisher of New York magazine and was the worldwide publisher of Runner’s World. He ran his marathon P.R. of 2 hours 38 minutes in 1979. Last month he was knighted by the Republic of Italy.