Chrissy Teigen—queen of social media, cookbooks, awards show reaction GIFs, and basically everything else—can throw down like no other when it comes to internet trolls.

I manually retweet the super-morons so they can’t delete and hope their employers will see. Sadly, not many have employers.

Her unapologetic quips and savage roasts deserve a damn medal, and her give no fucks/take no prisoners attitude is the GOAT. Her schooling should be taught in schools! Revel in her greatness with 45 of her best clapbacks.

1. Her epic feud with Debbie, I mean come on. Come through!

Have u ever seen a more epic feud pic.twitter.com/LDitpCeaq7

2. And when she beat this troll at his own game.

3. When someone who surely should have known better made comments about her ass, so she called him out in a video.

4. When she shut down trolls who criticized her for feeding Luna some truly delicious-looking red wine braised short ribs, which the wine cooks out of BTW.

5. She made sure to bring the receipts when someone suggested all she does is spend other people’s money.

6. That time she took down Piers Morgan.

[email protected] you could test us by announcing your retirement.

from what? trolling isn’t a job (I’ve tried)

it keeps me nice and not-racist so sure, give it a go.

Seriously, the only time worth mentioning Piers Morgan is when it’s to confirm he’s been owned.

8. When President Donald Trump retweeted a hater insulting her, and she was nothing less than honored.

The greatest birthday gift ever pic.twitter.com/v3O6jbS2PZ

Well, not many people can say the president of the United States called them a trashy gutter mouth through Twitter retweets pic.twitter.com/1JjauuoiJ7

9. Oh, and that time she told Trump he needs to go on and go somewhere else.

what time should we call your Uber?

10. And when she owned her space throne:

Yeah I am watching from a fucking throne in space. https://t.co/FVUlhHijFf

11. When she spread holiday cheer.

12. When she gave credit where credit was due.

@elizabethborjo1 no it is to me

13. When someone strangely took offense to her showing up to an awards ceremony.

Yes if my partner of 10 years is nominated, I will show up with him, you witch. https://t.co/lj1FTkWkPr

14. And when she hit so hard her rival protected their account.

15. When screenshots were her weapon of choice.

17. And once more for good measure.

19. When she silenced this stuffing-hater because stuffing > everything.

20. When she savagely told “judgmental” vegetarians to get out of her comments after she gave her opinion on which bacon slice looks the yummiest. 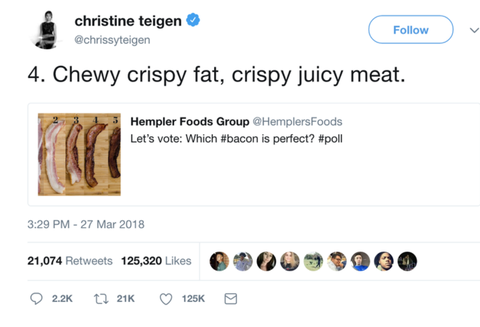 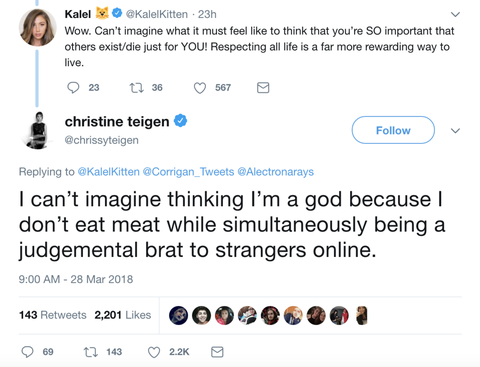 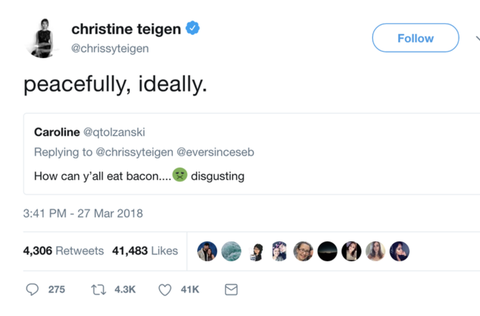 21. And when she revealed that Forever 21 fired her early on in her modeling career for being too “fat.”

so next time you pass a Forever 21, remember the fact that they are a bunch of assholes who fired me mid-makeup for being fat.

Not a traditional clapback, sure, but relevant because that’s some bullshit that deserves to be called out.

22. When people freaked out about her definition of clean eating, so she clarified.

ok everyone relax, i’m not a nutritionist and by clean i mean “not velveeta” https://t.co/peLFnAbgf3

23. Because she only eats pizza, thank you very much.

I don’t dance and trip https://t.co/UzK29zliBm

24. That time TMZ tried to diss her… for being sexy.

So you think I *am* sexy? What an odd diss. https://t.co/vd5PYrNqus

25. And that time Mike tried to diss her for her Lip Sync Battle hosting.

It’s not my fault your kids are up at 11, give them some warm milk. RT @MIKE_and_IKE_ you should not be on this show my kids are watching

26. When she went out to dinner shortly after giving birth to daughter Luna and people lost their damn minds.

I went to dinner. People are pissed. Good morning! pic.twitter.com/oQ54mtet8c

27. So she dropped this genius response.

i dunno i can’t find her https://t.co/fEj8rFHEMI

28. And an honorable mention for John, who stepped up and shared half the “blame.”

Funny there’s no dad-shaming. When both of us go out to dinner, shame both of us so Chrissy doesn’t have to take it all. We’ll split it.

29. Although, even he’s not safe from her shade.

It’s all in good fun, of course!

30. That other time she was tired of the negativity from mommy shamers.

31. And called out their snide comments.

“i never wanted to leave my daughter, i love her, BUT THAT’S JUST ME” – the passive aggressiveness is real!

32. And, again, when she was criticized for using IVF to get pregnant and having none of it.

Hi Linda, thanks for asking, you complete witch. I tried for about 9 years. Anything else, let me know! https://t.co/54e9AvIqQ9

33. When she dropped this extremely logical clapback to the creep who raised issue with her going commando.

I am pretty sure you could clearly see I’m a lady. https://t.co/WmOtIhwaaR

34. And when she had the best DGAF response to someone who pointed out her Super Bowl wardrobe malfunction that resulted in a nip slip.

35. That time she was not about to let people talk shit about how she and John parent Luna.

Imagine being this miserable. We are fine, thanks. pic.twitter.com/NNmlJWxKE6

Some people are just hell bent on being the fucking worst.

36. And she wasn’t afraid to give an Instagram commenter a crash course in common sense after they dared to ask why her family is jet lagged.

My babies are jetlagged 🇨🇳

37. When someone tried to claim she isn’t hilarious.

38. That time she dragged someone for pulling a “who cares?” in response to her tweet.

I respectfully ask you please don’t ever tag me in anything, ever. Words cannot explain how much I detest you.

40. When she revealed her secret to handling the haters. Amazing.

41. When she remained completely unfazed by a fat shamer who called her “chubby.”

I hate to say this but…you are not a small person? also I don’t care about my weight sooooo this does not hurt.

42. And that one time when a Twitter troll had the nerve to tell her she looked “awful” on the cover of a magazine. 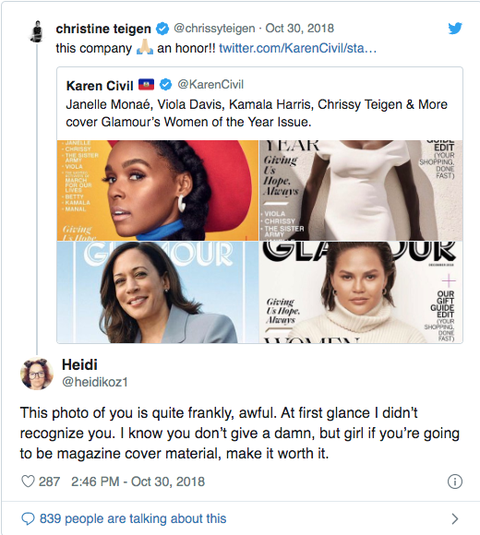 thank you, Heidi. in the future I will try harder to be the best cover model. if you could please send me specific tips and tricks (or past covers you’ve shot for reference!) that would be so awesome https://t.co/UAvwS71lg2

43. When she literally told a rude person to hop off her feed, “calm your tits and scroll on by!” Iconic.

I don’t care to see grainy fireworks, coachella selfies or infinity pool pics but i let people live. calm your tits and scroll on by. https://t.co/k604IcF55a

44. Oh, and that other time she defended Taylor Swift! Well…kinda.

45. And that other other time someone tried to tell Chrissy how to dress in front of her kids.

There’s no troll quite like the kind who changes their profile photo to the very picture they were trolling. #CommentsByCelebs

46. When someone seriously tried to reduce her to her boobs.

This is why you are the Mayor of Twitter. 🥰

47. When she had the *perfect* response to a random person asking her if she was pregnant. 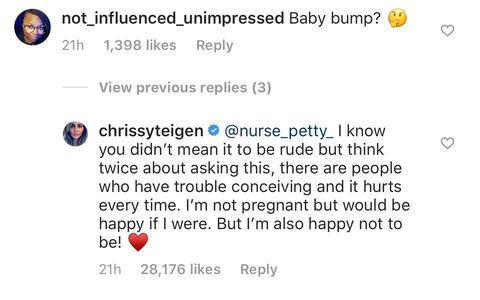 48. When she could care less if haters follow her or not.

Yessss @genesis_usa we won the night! along with the chiefs I guess but ad wise WE WON! thanks to whoever made this fake award and put it into the universe! 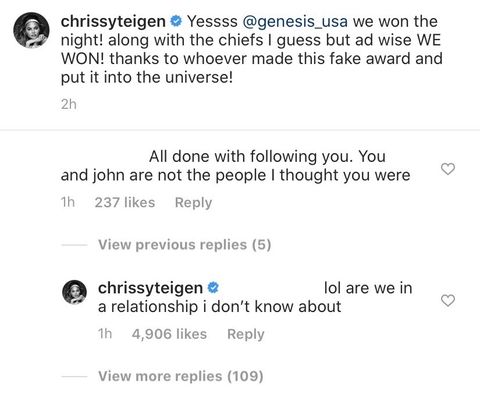 49. And that other time when she roasted a dude’s sex life and admitted that nope, she doesn’t use Photoshop on her pics.

50. And finally, when she hit back a troll who had the NERVE to say she’s shaped like Spongebob Squarepants.

Imagine if one day I showed up with hips and an ass. Ooooo you guys would be pissed then too! I’m happy, John’s happy, we all happy and doing a-okay!