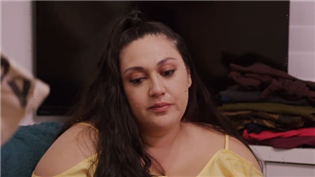 90 Day Fiance: Happily Ever After? Season 6, Episode 4 had a lot of tears.

Kalani cried, speaking to her sister about her situation with Asuelu.

When she spoke to Asuelu later, things were so much worse.

Angela had her surgery … but not before lying to her surgeons about following the non-smoking guidelines.

Julia meets up with a wedding planner, eager to launch her new career and move away from the farm.

But a conversation with Brandon takes a toxic turn as her weird jealousy issues make her lash out.

Andrei has his first day of work for Chuck, but he is already clashing with basically everyone.

Yara and Jovi are still getting accustomed to being new parents, but Jovi knows that their lives will soon change (again).

Natalie drives home for an awkward reunion with Mike after their fight at Mike's birthday dinner.

And Tiffany and Ronald have a painful conversation, while Daniel just wishes that Ronald were there with them already.

2.Kalani has some opinions

7.Kalani has to say something

8.At first, she just talks about spicing up their sex life

10.But as Kalani keeps talking about their relationship

11.To Asuelu, what he's doing is enough

12.This is so hard for Kalani

13.That makes Asuelu mad, too

16.Her surgeons come in

19.He is happy to answer Michael's questions

21.Angela gets marked up for surgery

22.On the operating table, Angela is … Angela

28.Nothing has really changed since the wedding

32.Back home, things take a turn

33.Julia lists the many animal duties she had that day

35.They need to move out sooner rather than later