A Complete Timeline of Kristin Cavallari and Jay Cutler’s Relationship

Kristin Cavallari and Jay Cutler’s 10-year relationship has always had its ups and downs, but many fans were still surprised when Cavallari announced via Instagram on April 26 that the couple are divorcing.

“With great sadness, after 10 years together we have come to a loving conclusion to get a divorce. We have nothing but love and respect for one another and are deeply grateful for the years shared, memories made, and the children we are so proud of,” she wrote. “This is just the situation of two people growing apart. We ask everyone to respect our privacy as we navigate this difficult time within our family.”

The couple started dating in 2010, married in 2013, and now have three children together. Let’s take a look back at how the Very Cavallari star and former Chicago Bears quarterback actually ended up here.

Cavallari and Cutler were first linked romantically in the summer of 2010. Later it was revealed they were set up by Giuliana Rancic. “"You know who I set up? Kristin Cavallari and Jay Cutler,” she told Us Weekly back in 2011. “I knew them both for a while and introduced them, and they went on a date. Now they’re dating.”

Cavallari talked about the beginning of their relationship herself in a 2013 A Drink With interview but didn’t mention Rancic’s involvement. “I will tell you what really happened. I got a call from my publicist that Jay wanted to fly me out to Chicago and take me out. I didn’t know who he was! I had to google him,” she said. “I was in the middle of filming The Hills, so I was like, ‘I don’t want a boyfriend in Chicago,’ and passed on it. A year later I was here visiting my mom, and we ended up going to a preseason game. I had forgotten all about it, and my mom said, ‘Didn’t Jay Cutler ask you out?’ Long story short, I ended up meeting him, and when he walked in, I was like, ‘Oh my goodness!’ I thought he was really cute.”

Just a couple of kids. This picture is almost 9 years ago. Today, we’ve been married 6 years. Love this man.

The couple makes an official red-carpet appearance at the premiere of Source Code in Los Angeles. In her book Balancing in Heels, she wrote, “When we were apart, we texted constantly, and he wrote me the sweetest love emails. He was the strong, manly man I wanted but had a sweet, romantic side, as well.” 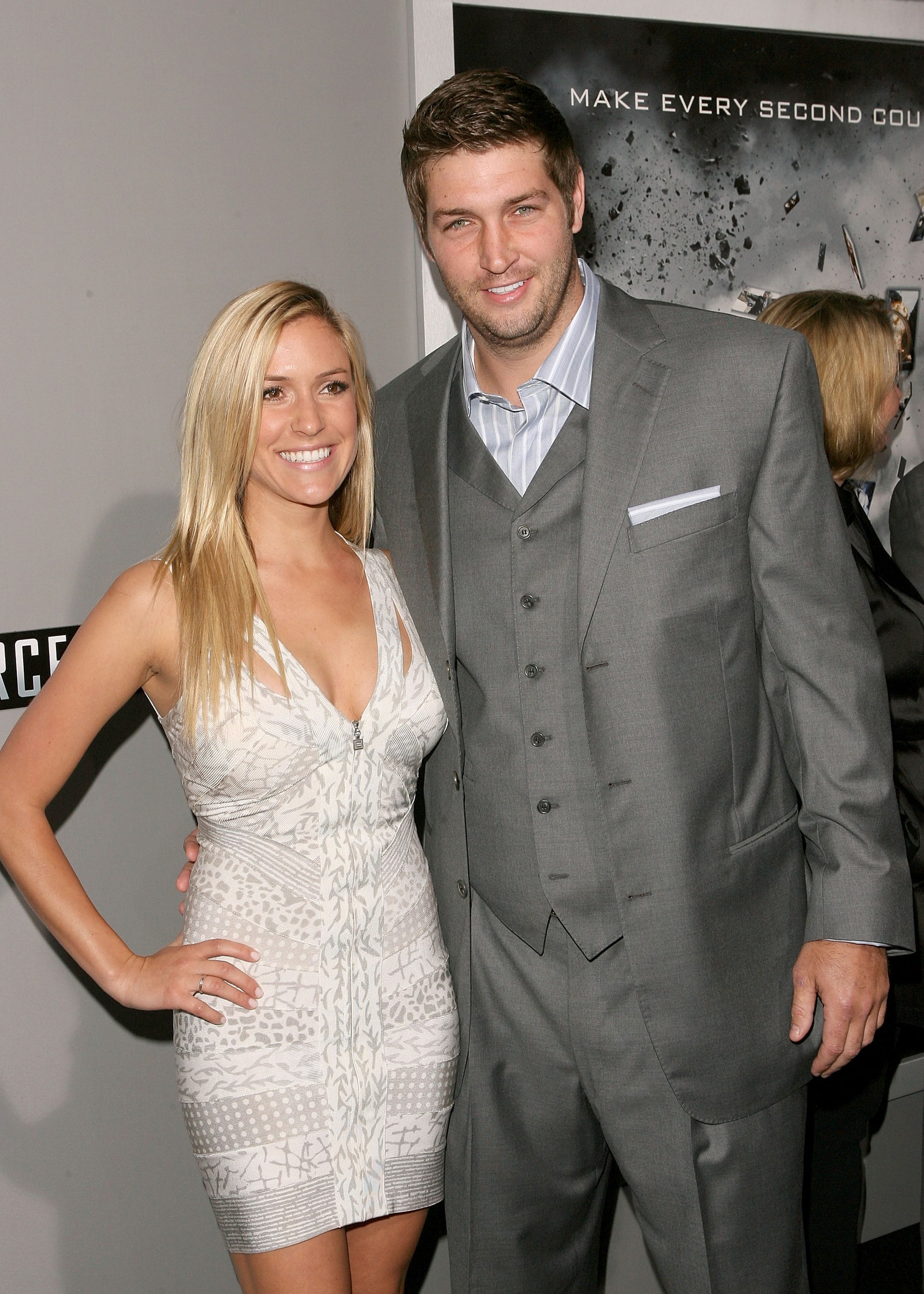 Just like that, they’re engaged after Cutler reportedly proposed over Easter weekend.

And almost as quickly, the engagement is off. Us Weekly reported at the time that Cavallari was “blindsided” when Cutler broke things off. Meanwhile, he posted on Facebook, “Thank you all for the support, but if you talk bad about Kristin I will delete and block you.”

The roller-coaster ride that had become Cavallari and Cutler’s relationship continued, and the engagement is now back on. This time the proposal was a bit different. “It was so silly,” she told E! News in 2013. “I was in the airport, leaving Chicago. We had just spent however many days together, and we were texting and somehow it came up, like, ‘Oh, shall we get married?’ We’re like, ‘Yeah, okay.’ And then he sent my ring in the mail. So I actually had my ring sitting at home for a couple of weeks before I put it on.”

Wedding plans are put on hold for a very happy reason: Cavallari announced she was pregnant with their first child. “I’m not even looking for a wedding dress right now,” she told Celebuzz. “I’m pregnant! I’m not going to go try on wedding dresses.” 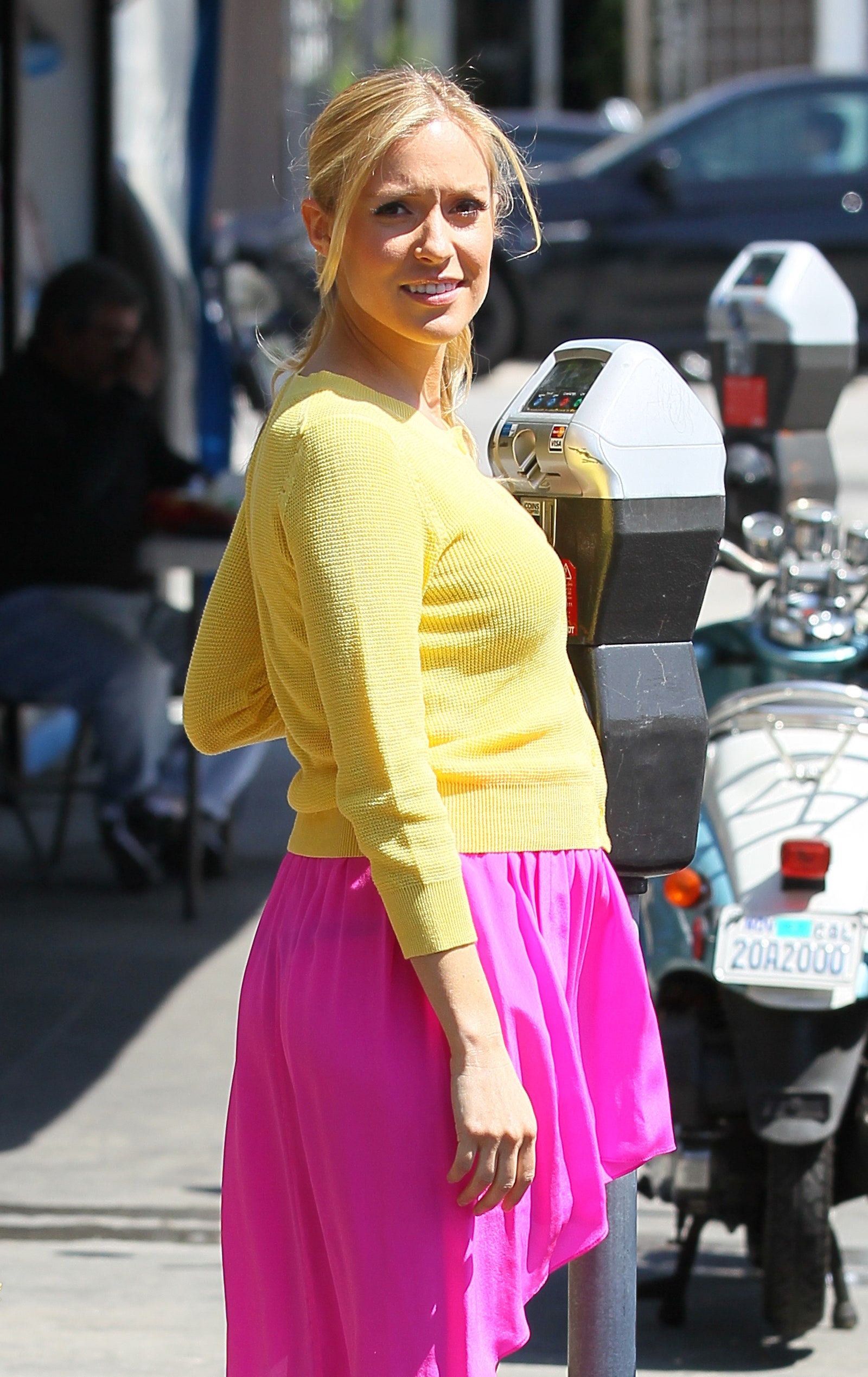 “The flowers and everything were very simple, but it was very warm and cozy,” she told People at the time. “It was all about the lighting and the candles, and the atmosphere was just so warm. It was absolutely perfect.”

“We were both just like, ‘I can’t believe we did it!’” she continued. “Especially Jay, because he’s never worn a ring before. It’s going to take some getting used to.”

The Cavallari-Cutler family welcomes a little girl, Saylor James Cutler, into the mix on November 23, 2015. “We picked out this girl’s name when I was pregnant with our first,” she told Cricket’s Circle that September before her daughter was born. “I met a woman and her dog, and I loved her dog’s name. Funny enough, it was the name she had picked out if she had a girl, but she had boys, so she used it for her dog instead.”

Morning snuggles with my girl. First time I've been able to hold her by myself in a week. #GirlsTrip #LA

That same month, Cavallari revealed the couple goes to therapy together. “I’m not ashamed to say that Jay and I consistently go to therapy, because it’s been extremely beneficial for our relationship,” she told American Baby. “For example, when you’re fighting, you should never place blame on your partner by saying, ‘You do this’ or 'You do that.’ You should say how those actions make you feel. It goes a long way.”

After eight seasons, Cutler is cut by the Chicago Bears, and the family decided to move to Nashville. “So we're moving from Chicago soon and I gotta say, I’m really gonna miss this place,” Cavallari wrote on Instagram. “Not only we’re [sic] all 3 of my babies born here, it’s where it all began with jay, it brought me closer to my mom who has become my best friend, I’ve made some amazing girlfriends, and I’ve really enjoyed being back here (a lot of people don’t know I lived here when I was younger). Thanks for all the good times, Chicago. This will always be a special place for us ❤️.”

So we're moving from Chicago soon and I gotta say, I'm really gonna miss this place. Not only we're all 3 of my babies born here, it's where it all began with jay, it brought me closer to my mom who has become my best friend, I've made some amazing girlfriends, and I've really enjoyed being back here (a lot of people don't know I lived here when I was younger). Thanks for all the good times, Chicago. This will always be a special place for us ❤️

“They are going to sell their place in Chicago and the family [is] moving to Nashville,” a source told People at the time. “They have a place down there, it’s where Jay went to college and he’s got lots of friends there. Nashville has a special place in her heart as it’s where she got married.”

While Cavallari has been a reality-show veteran when Very Cavallari premiered on E!, her husband is not; still, he becomes prominently featured on the show about their life (and Cavallari's brand, Uncommon James) in Nashville. Fans loved him on the show and frequently discussed him on social media.

“Coming from the football world where people didn’t get his personality, it’s been really nice for me and him [to have fans] appreciate him and see the real side of Jay,” she told People. “He’s been having fun with the show. Now that he sees he had a really positive reaction, he’s been having a good time with it.”

The third season of Very Cavallari brings up cheating rumors surrounding Cutler and Kelley Henderson, one of Cavallari’s close friends and a cast member. “When season two was airing, there was a lot of talk on social media about Jay and Kelly having an affair,” Cavallari said on the show, per People, noting she and Henderson had not spoken in months. “Not for one second have I ever thought that it was true. It wasn’t the actual accusations of them having an affair that made me upset; it was how Kelly went about it.”

Cavallari continued, “I kept trying to reach out to her and talk to her about it and tell her how I was feeling, and instead of her just owning her side of it and being like, ‘I’m sorry. Oh my God, that was never my intention,’ or whatever, she kept giving me pushback and would get really defensive. And then she literally just stopped responding to me. That, to me, is such a slap in the face. You don’t care? Good to know.”

With great sadness, after 10 years together we have come to a loving conclusion to get a divorce. We have nothing but love and respect for one another and are deeply grateful for the years shared, memories made, and the children we are so proud of. This is just the situation of two people growing apart. We ask everyone to respect our privacy as we navigate this difficult time within our family.

The split quickly garners buzz. A source who spoke to People said the cheating rumors have “absolutely nothing to do” with the divorce. However, divorce papers obtained by Us Weekly and other outlets state Cavallari is reportedly accusing Cutler of “inappropriate marital conduct” while asking for full custody of their three children.

The paperwork reportedly states that Cutler “is guilty of such inappropriate marital conduct as renders further cohabitation unsafe and improper” and denies his claim that he “has always been the available at-home parent and primary caretaker” of the kids. Cutler’s divorce filings cited “irreconcilable differences” and asked for joint custody. Of course, it’s worth noting none of this confirms there was cheating.

This post will be updated as more information is available.