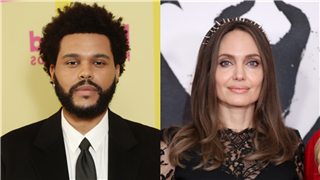 Angelina Jolie and The Weeknd Spotted at Dinner Together

Angelina Jolie and The Weeknd headed out on the town together.

The Oscar-winning actress and the entertainer, whose real name is Abel Tesfaye, were photographed dining at Giorgio Baldi in Los Angeles this week. ET has reached out to Jolie and The Weeknd’s reps for comment.

Jolie, 46, wore a black dress, a beige trench coat, nude heels and covered her face with a black face mask, per photos published by The Sun on Thursday. The 31-year-old “Blinding Lights” singer, on his end, rocked a black shirt with jeans and a matching jacket. Per the outlet, the two spent hours at  the restaurant and left the establishment separately.

The sighting comes just after The Weeknd’s rep confirmed to ET that he is set to star in, produce and co-write a new HBO drama series currently titled The Idol. The series will follow a female pop singer who starts a romance with an enigmatic L.A. club owner who is the leader of a secret cult.

He will also serve as an executive producer on the project along with Reza Fahim and Euphoria creator Sam Levinson, with all three credited as creators of the show.

Jolie, meanwhile, recently celebrated her 46th birthday with her six children. She also debuted a new tattoo while in New York City. The actress added a quote from astronomer Galileo Galilei to her forearm. Her new ink reads “Eppur si muove,” which is Italian for “And yet it moves.”