In a star-studded evening honouring the best and brightest in TV, Dec took to the stage without his presenting partner Ant McPartlin for the show in London’s Royal Festival Hall.

Hosted by Sue Perkins, tt was a night of shocks for many as Love Island scooped the prize for Best Reality and Constructed Factual, beating out rivals such as The Real Full Monty and Celebrity Hunted. 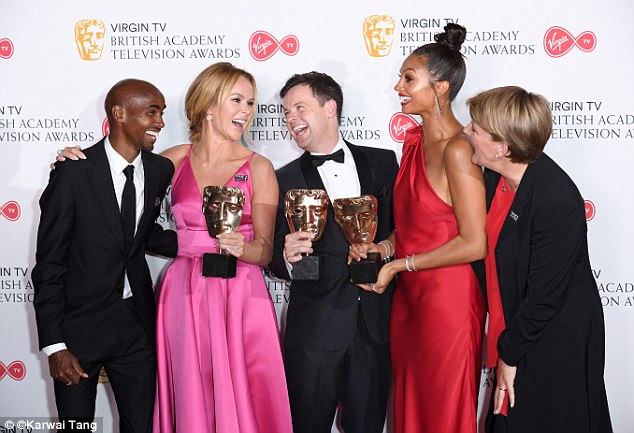 Dec took to the stage along with the Britain’s Got Talent producers and judges Amanda Holden and Alesha Dixon, as the ITV primetime favourite beat out rivals such as Saturday Night Takeaway and Michael Mcintyre’s Big Show.

As the group took to the stage – receiving the award from presenters Claire Balding and Sir Mo Farah – Dec stood by with the judges as one of the producers led their acceptance speech.

Dec’s appearance at the BAFTAs came as he made his first red carpet outing without his trusty sidekick Ant, who has taken a break from presenting duties following his drink-drive arrest in March and his ongoing battle with substance abuse. 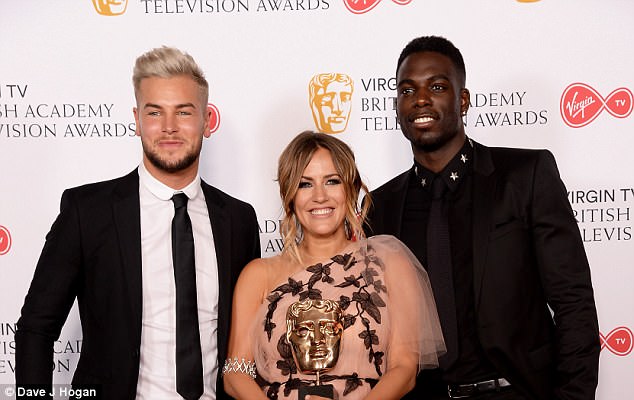 Shocking: Love Island took a shock victory at the awards event, beating out its rivals to win Best Reality and Constructed Factual

Meanwhile Love Island’s victory for Best Reality and Constructed Factual came as a shock for many TV fans, after the ITV2 favourite became one of the most talked-about shows of 2017.

Taking to the stage to accept their prize was host Caroline Flack, along with the show’s most recent stars Chris Hughes and Marcel Somerville, while Iain Sterling rushed to the stage in a break from providing commentary for the show.

Joking about struggling to make it to the stage in her grand pink gown Caroline said: ‘I knew this dress was a bad idea. Wow a BAFTA on behalf of all of us thank you so much.

‘It’s been so brilliant watching this show grown over the last three years. A huge thank you to all the Islanders for giving so much of themselves.’ 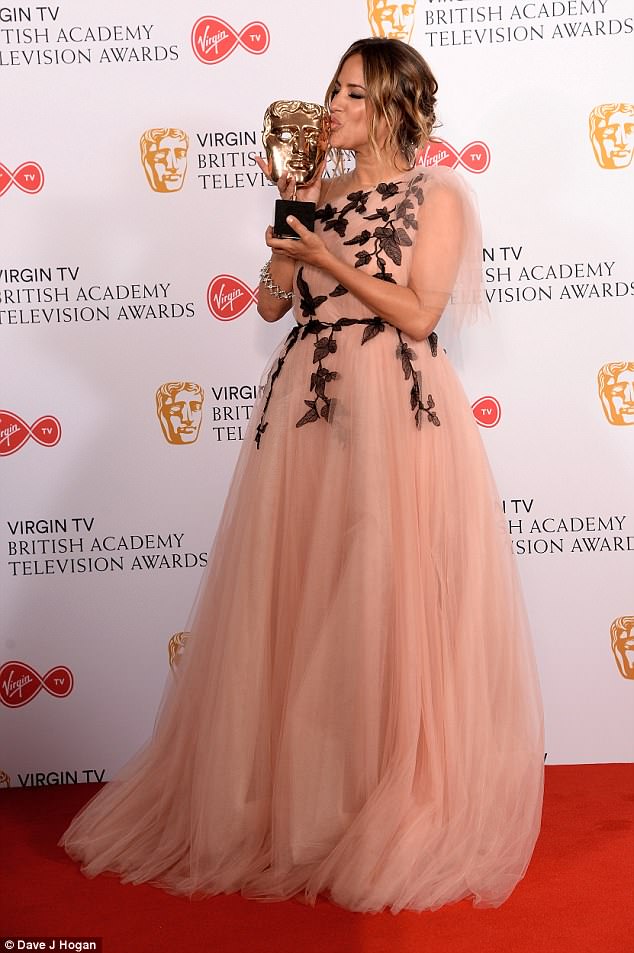 Would I Lie To You?

The End of the F***ing World

No More Boys and Girls: Can Our Kids Go Gender Free?

The Secret Life of the Zoo

Murdered for Being Different – WINNER

Blitz: The Bombs that Changed Britain

Doctor Who (The Thirteenth Doctor Revealed)

Game Of Thrones (Viserion is Killed by the Night King)

FEMALE PERFORMANCE IN A COMEDY PROGRAMME

Daisy May Cooper – This Country – WINNER

MALE PERFORMANCE IN A COMEDY PROGRAMME

Asim Chaudry – People Just Do Nothing

Rob Brydon – The Trip to Spain

The Battle for Mosul (Sky News)

Eating With My Ex

Chris Packham: Asperger’s and Me

One Deadly Weekend in America

Anupam Kher – The Boy with the Topknot

Sue Perkins once again return to host the show, and never one to shy away from a grand entrance opened proceedings with the help of the Scots band.

Alluding to the recent controversy surrounding the BBC pay gap, she joked she wasn’t going to mention the issue, before adding: ‘To be honest I’m going to be putting half the effort. To be honest I haven’t even cleaned my teeth.’

And paying homage to the Time’s Up movement, which was supported by many actresses walking the red carpet, Sue spoke about Jodie Whittaker being cast as the first female Doctor in Doctor Who.

She said: ‘If there’s one thing this year has taught us, if anyone can beat off horrible grotesque monsters, it’s an actress.’ 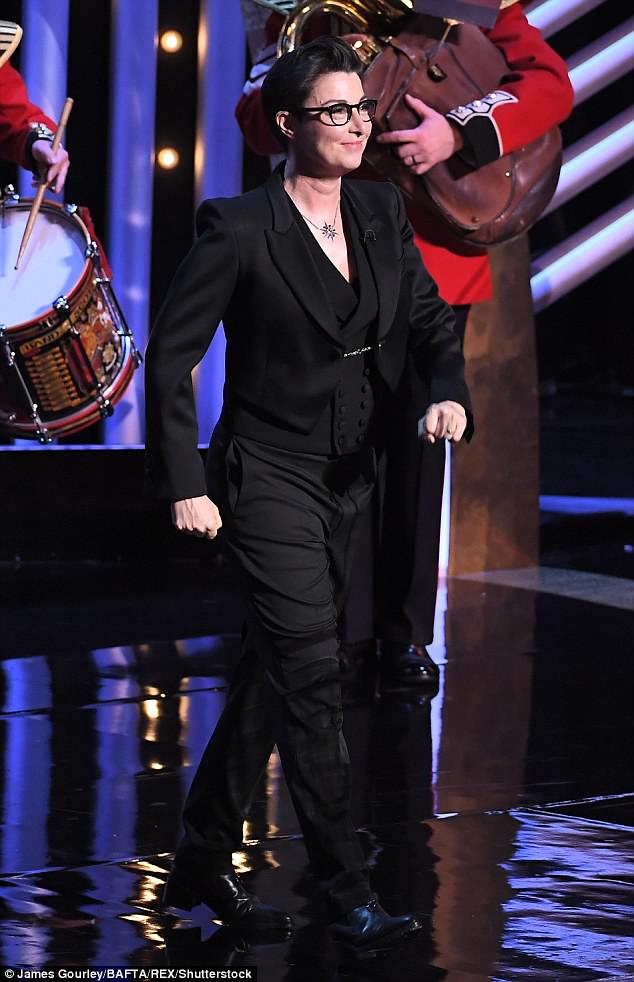 Jovial: Sue Perkins once again returned to host proceedings, and opened the show with the help of a brass band 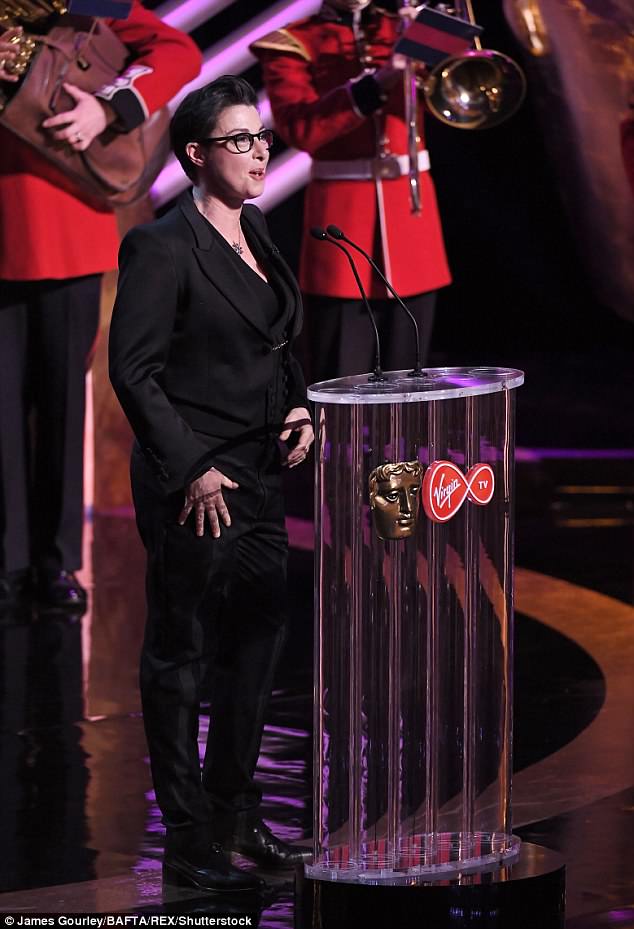 Stylish: The former Bake Off presenter donned an all-black three-piece suit as she gave the awards show’s opening monologue

Soon-to-be Doctor Who co-stars Bradley Walsh and Jodie Whittaker presented one of the most sought-after awards of the night: Best Drama Series.

And despite Line of Duty and The Crown having the most nominations, Peaky Blinders scooped the prize in what some may dub an upset.

Taking to the stage along with David Caffrey, Joe Donaldson, Caryn Mandabach and Joe Cole, series creator Steven Knight was greeted by mass applause as he gave the acceptance speech.

Accepting the award Steven paid mention to the show’s stars Cillian Murphy and Helen McCrory, saying: ‘I wish the people who created such iconic TV, soon maybe they will be here as well because they deserve to be.’ 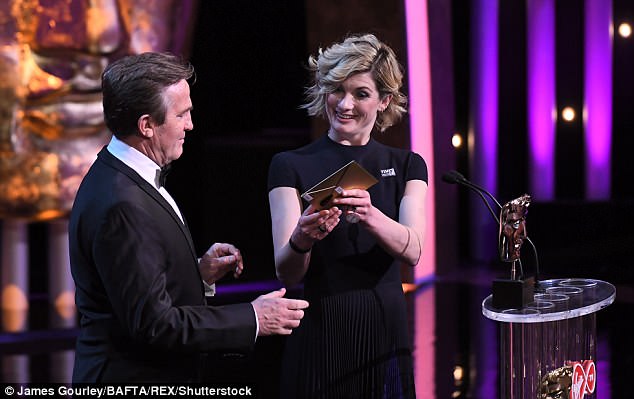 Up first: Soon-to-be Doctor Who co-stars Bradley Walsh and Jodie Whittaker presented one of the first awards of the night: Best Drama Series 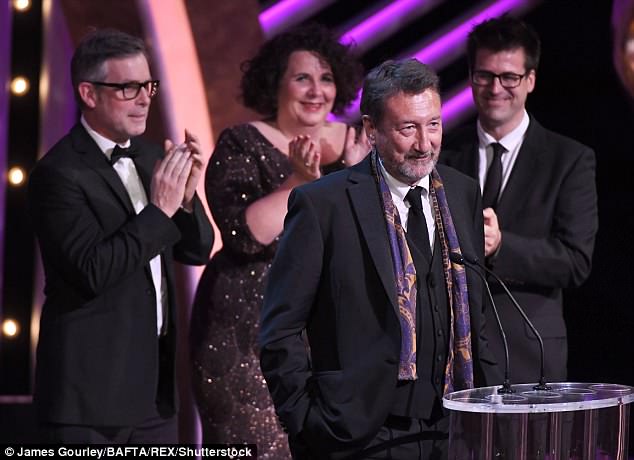 Up next was Best Comedy Entertainment Programme, presented by Catastrophe co-stars Sharon Horgan and Rob Delaney, awarded to Murder in Successville.

Joining the producers on-stage was series star Tom Davis, who said: ‘It’s been three years making this show it’s a show we all love. I want to thank the cast, all the guys that come and play with us and d**k about. I wasn’t expecting this I had a broken face ready.’

Best Supporting Actor was awarded to Brian F. O’Byrne, for his performance as devastated father of murdered schoolboy Steve Jones.

Dedicating his award to the little boy and his family he said: ‘I can’t believe I’m going to be one of those people who didn’t prepare anything. Than you BAFTA.

‘It’s kind of difficult to get away and play someone who’s at home tonight, every night for the last ten years, suffering the grief for their loss of a child.’ 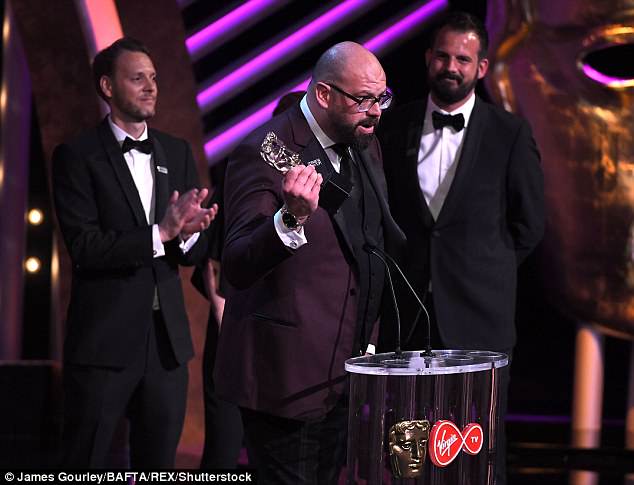 Thrilled: Best Comedy Entertainment Programme was awarded to Murder in Successville, with star Tom Davies thanking the cast for coming to ‘d**k about’ on the show 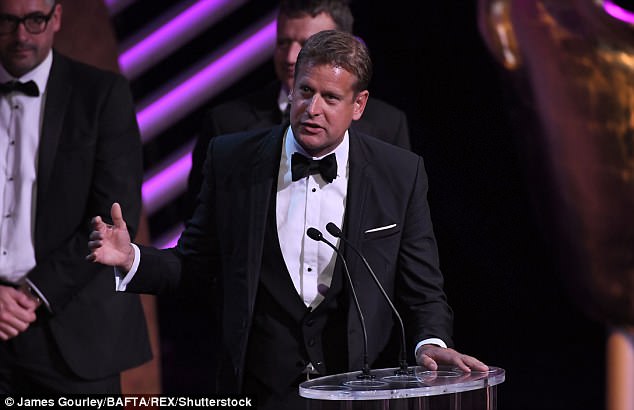 Race to the top: Earning the Sport Award for his coverage of the 2018 Grand National, ITV presenter Ed Chamberlain took to the stage

Winning the award for Best Miniseries was the heartbreaking drama Three Girls, which told the true story of the Rochdale child sex abuse ring.

Accepting the award, along with Maggie Oliver and Sara Rowbotham, one of the show’s producers said: ‘Thank you to the BBC for supporting us making this incredible difficult programme. The cast and the crew were the most committed and most dedicated of anyone we have ever worked with.

‘They were inspired by the courage of those who fought incredibly hard for justice.

‘If people came to this programme it’s because of you. You went to the court, you went to the police, you smacked down the doors. 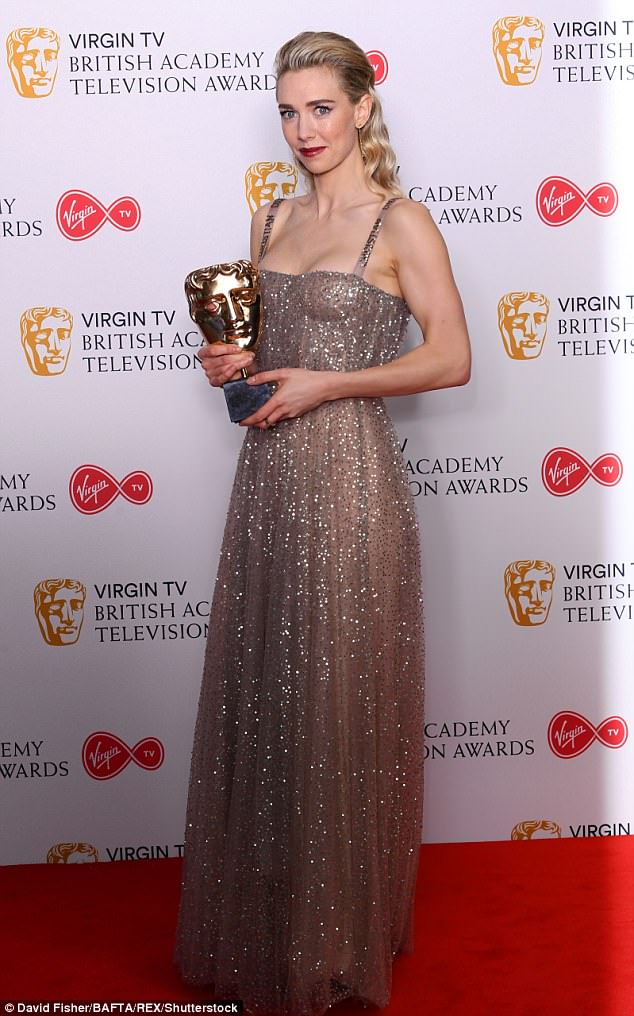 Stunning: Vanessa Kirby scooped Best Supporting Actress for her role as Princess Margaret in The Crown 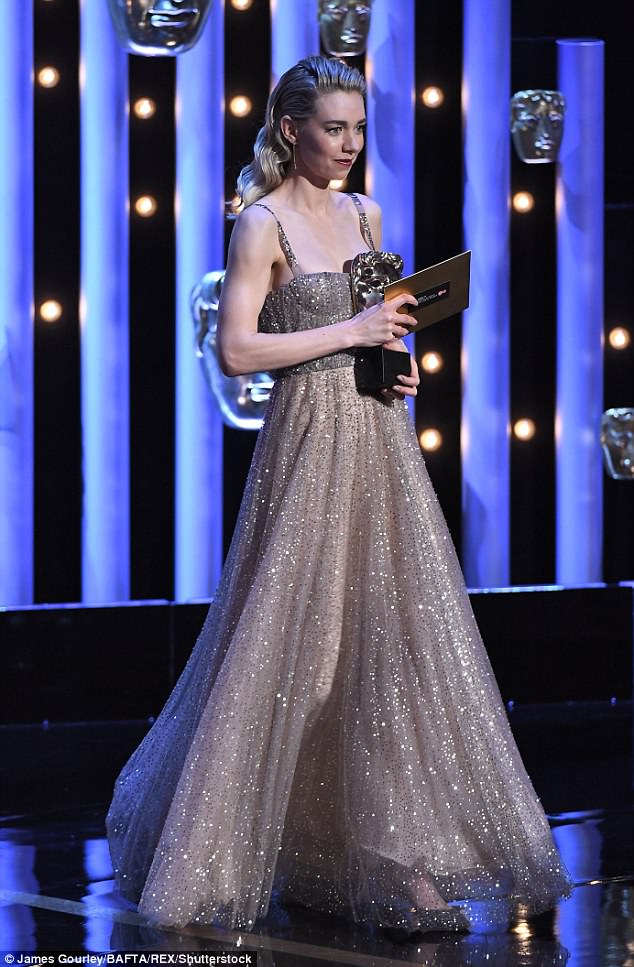 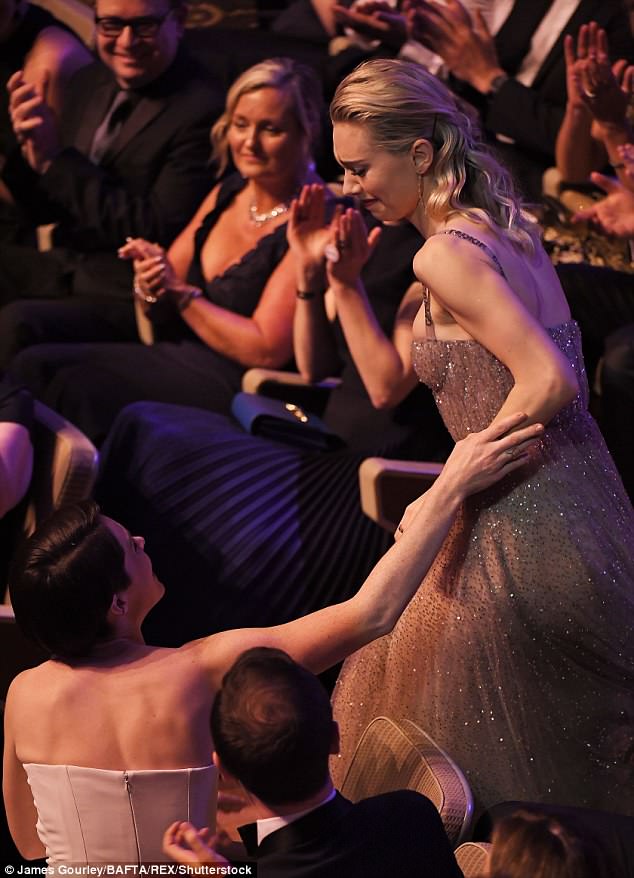 ‘To the thousands of girls in the scores of towns who have been made to feel like you don’t deserve, thank you this is for you.’

One of the most competitive awards of the night was Best Supporting Actress, and was awarded to The Crown star Vanessa Kirby.

The British beauty dedicated the award to the late monarch she portrayed in the Netflix series, saying ‘I just feel like the luckiest person to play someone who was so brave and strong, so thank you Margaret where ever she is.’