BAFTA TV Awards 2018: Sue Perkins is blasted for her ‘sexist’ jokes as her hosting gig ‘falls flat’ with viewers

The presenter, who fronted the ceremony for the first time last year, opened the show with a traditional monologue, littered with jokes about the gender pay gap, feminism and inequality in the industry.

However, the speech failed to amuse viewers, who instead took to Twitter to brand the 48-year-old ‘sexist’ and ‘self-indulgent’. 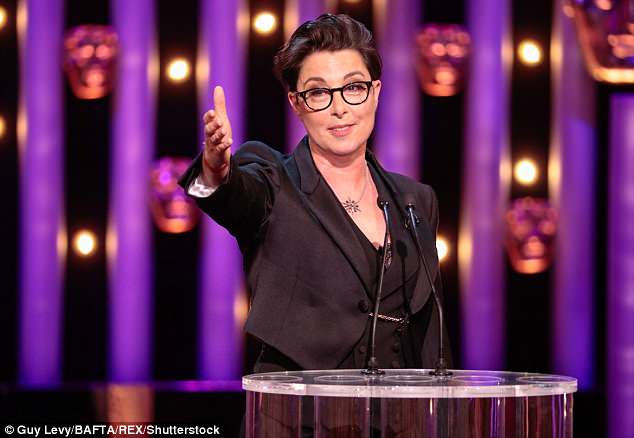 The former Bake Off host kicked proceedings off by poking fun at her entrance, which saw her welcomed onstage by a group of Scots Guards.

Addressing the audience at the Royal Festival Hall, she quipped: ‘Typical of course, 10 men blowing their own trumpets before a woman even so much as opens her mouth.’

Met with chuckles from the audience, she went on to address the gender pay gap seconds later, adding: ‘I don’t want to ignore the elephant in the room…but on such a prestigious occasion I feel it would be crass and borderline inappropriate to discuss my fee for tonight. 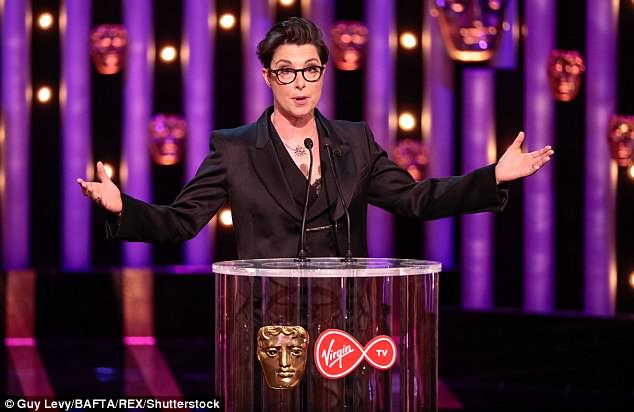 Awkward: The presenter opened the show with a string of jokes about the gender pay gap, feminism and inequality in the industry – which did not go down well with fans 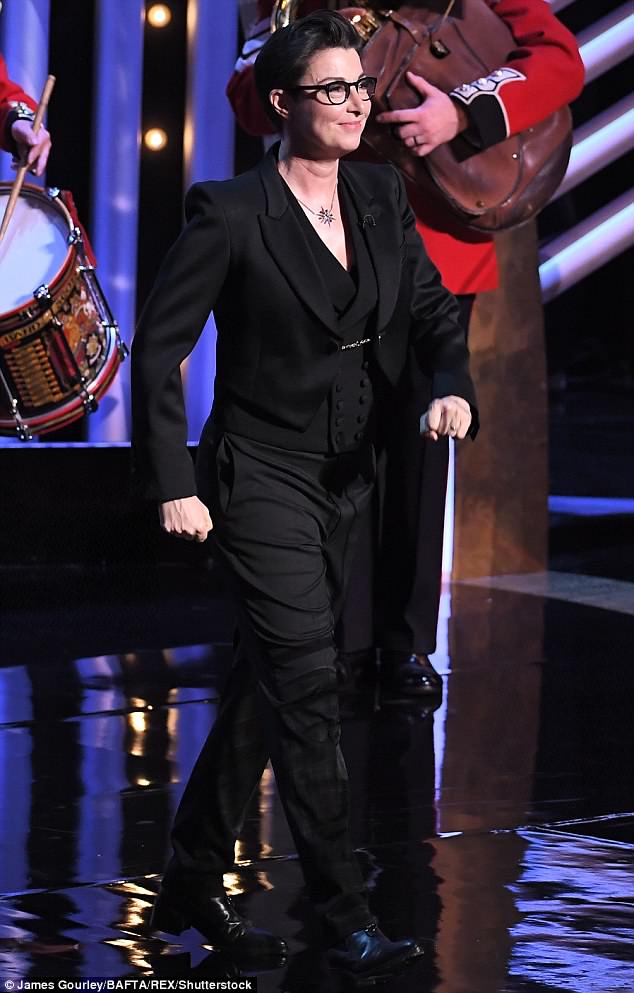 Cheeky: Addressing her entrance beside Scots Guards, she began: ‘Typical of course, 10 men blowing their own trumpets before a woman even so much as opens her mouth’

‘So let’s just say I’m going to be putting in half the effort. To be honest I haven’t even cleaned my teeth.’

Not stopping there, she interspersed jokes about the Harvey Weinstein scandal and even the Duchess of Cambridge with further comments about gender inequality.

She continued: ‘A woman may be hosting this evening but don’t worry, I’ve still got two big fellas up there to keep an eye on me. You know, just to make sure my driving is alright.’

The star even made a dig at fellow television presenter Piers Morgan, after clocking a grand organ onstage beside her. 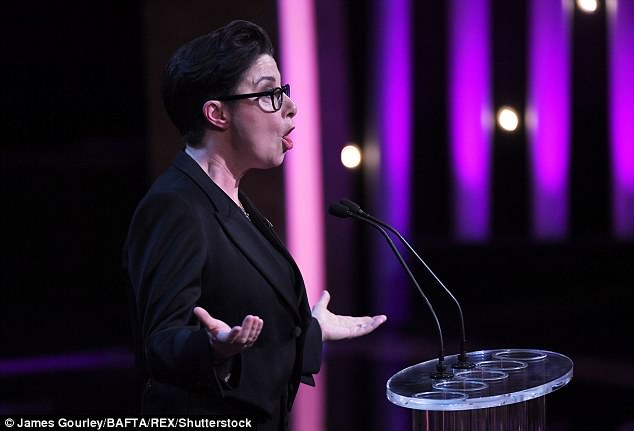 No stopping her: She interspersed jokes about Harvey Weinstein and even the Duchess of Cambridge with comments about gender inequality, and even made a dig at Piers Morgan

‘Turns out tonight I’m having to work alongside a massive organ, now I know how Susanna Reid feels on Good Morning Britain,’ she joked.

The Croydon born star ended her speech by assuring viewers the winners had been kept a secret until now, stating: ‘Facebook knows obviously, but apart from that we are all in the dark.’

While the monologue was met with laughter from the live audience, it did not go down as well with viewers – who immediately took to Twitter to brand her both unfunny and sexist.

One disgruntled fan kicked things off by writing: ‘Sue Perkins looks/sounds like she’s really enjoying herself. Shame the same can’t be said for the audience and viewers. #SelfIndulgent’

Not impressed: While the monologue was met with laughter from the live audience, it did not go down as well with viewers – who immediately took to Twitter to brand her unfunny

While others agreed: ‘Oh good, Sue Perkins TRYING to be funny and once again, failing’, ‘Wow… Sue Perkins’ jokes are really falling flat…’ and ‘I didn’t think Sue Perkins could ever get less funny than she normally is, but fair play to her for pulling it off tonight.’

Further viewers expressed their annoyance at her ‘anti-male’ jokes, and claimed there would be huge uproar if a man said the same about a woman onstage.

One wrote: ‘Why is Sue Perkins allowed to make jokes about men’s anatomy/physical appearance? Imagine it was the other way around,’ while another added: ‘Here we go… Sue Perkins with her usual sexist jokes.’

Others were quick to agree, chiming in: ‘Seriously @BBC how are you allowing @sueperkins to be so anti male … people would be up in arms if this was a man making these comment’

Outraged: Further viewers expressed their annoyance at her ‘anti-male’ jokes, and claimed there would be huge uproar if a man said the same about a woman onstage 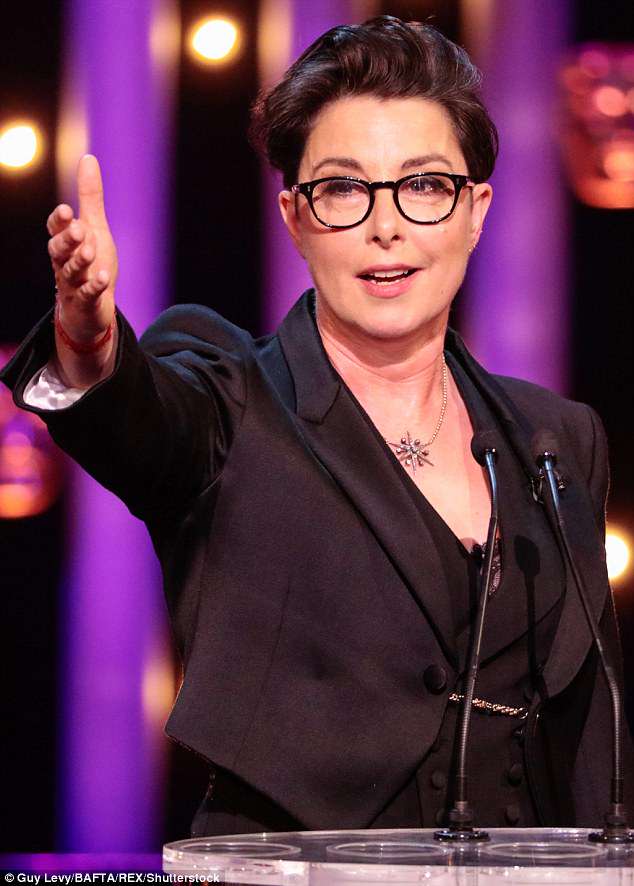 Second time lucky: Sue, who is best known for hosting the BBC’s version of The Great British Bake Off, hosted the awards ceremony for the first time in 2017

Against the grain: However, her performance was met with high praise from a handful of other viewers, who praised her ‘savage’ jokes, and took her speech in good humour

And: ‘But WHY is Sue Perkins allowed to make such sexualised comments towards other women and do things that if a man was to do/say…he’d be classed as being sexist,arrogant and a pig. It works both ways doesn’t it?…

A further fan even called for the BBC to penalise her for her attitude, writing: ‘I’m a bloke like half of this nation just sat at home minding my own business when Sue Perkins turns up on my telly making probably the most snide, horrible, sexist comments i’ve ever heard on TV constantly. If this isn’t punished then it’s a joke.’

However, her performance was met with high praise from a handful of other viewers, who praised her ‘savage’ jokes, and took her speech in good humour.

One said: ‘Sue Perkins is pulling no punches tonight I love her’, while others added: ‘I really really love Sue Perkins,’ ‘@sueperkins Bloody Bafta fabulous’ and ‘Sue Perkins is likeable. Think she’s doing a good job.’

Would I Lie To You?

The End of the F***ing World

No More Boys and Girls: Can Our Kids Go Gender Free?

The Secret Life of the Zoo

Murdered for Being Different – WINNER

Blitz: The Bombs that Changed Britain

Doctor Who (The Thirteenth Doctor Revealed)

Game Of Thrones (Viserion is Killed by the Night King)

FEMALE PERFORMANCE IN A COMEDY PROGRAMME

Daisy May Cooper – This Country – WINNER

MALE PERFORMANCE IN A COMEDY PROGRAMME

Asim Chaudry – People Just Do Nothing

Rob Brydon – The Trip to Spain

The Battle for Mosul (Sky News)

Eating With My Ex

Chris Packham: Asperger’s and Me

One Deadly Weekend in America

Anupam Kher – The Boy with the Topknot