ITV tried its best with a celeb-fest, but BBC wins the Battle Royal, writes JACI STEPHEN

Who could have predicted an Episcopalian bishop and a ‘fire and love’ address that might have been delivered by a closet pyromaniac at a firemen’s Christmas party? ‘A forceful and uplifting message,’ said the BBC’s Huw Edwards. That was one way of putting it.

Thank goodness for The Most Reverend Michael Curry, who is a real symbol that the Royal Family has moved on – something also reflected in a definite revision of broadcasting style from the past.

True, it was not a State ceremony, but a change in the air was very apparent. The BBC was ensconced in a makeshift studio outside Windsor Castle, where the always brilliant Kirsty Young looked elegant in an off-the-shoulder number (and not a Dimbleby in sight – hooray!). 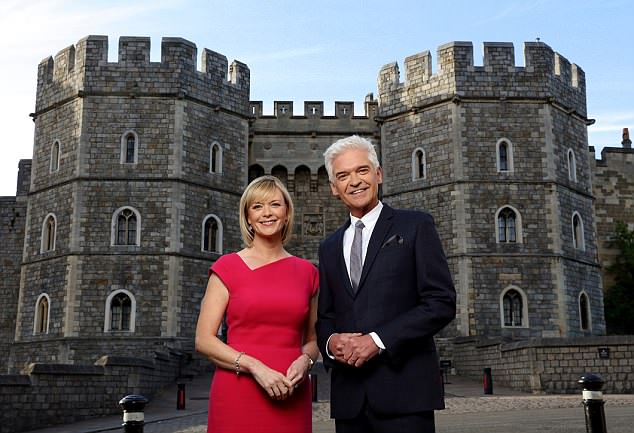 ITV had shelled out on a more lavish, purpose-built affair, from which Phillip Schofield’s relaxed style was straight out of This Morning. Sky broadcast in UHD (ultra-high definition), a first for any royal event. The BBC waived the licence fee for a day for communities wanting to watch the wedding at parties and special events.

Everything went according to plan – much to the palpable disappointment of Huw, especially when the bridesmaids and page boys behaved themselves throughout.

At least he was a welcome contrast to his colleague Alex Jones, out among the masses, being very loud, talking about Prosecco. Amal Clooney, she said, looked ‘hot to trot’. Not in those heels she didn’t. The rivalry between the main stations is always apparent: the BBC opting for a seriousness, lightened by sophisticated wit, ITV trying (but failing) to stop dribbling every time a celebrity came into view, and Sky somewhere in between.

Yesterday, the competitive instincts were out in full force: Kay Burley bizarrely yelling ‘Congratulations’ as the Royal couple passed; ITV’s Julie Etchingham insisting she had ‘definitely got a wave’. It was the BBC that got it right, with a broad variety of guests who talked about fashion, the cultural impact of the marriage, and also the work of Princess Diana. Schofield, meanwhile, told us ‘It’s not just about celebrities today’ but had to stop in his tracks when Oprah Winfrey arrived ‘looking great in a Philip Treacy hat’. The presenters tried to insist it was, above all else, ‘a family occasion’ – before an extended shot of Princess Anne looking about as happy as a horse in an abattoir.

Sky News could not match the celeb-fest and it felt as if the channel was very much in third place when it came to guests, both inside and outside the chapel.

Mingling among the flag-waving children, an excitable Kay Burley asked for a lick of a girl’s ice cream. She refused, but Kay licked it anyway. That kid’s going to be in therapy a long time.

It was a great day for love. For fire. And the Episcopal Church.

More than two billion people around the world tuned in to watch Prince Harry marry Meghan Markle yesterday – making it the fourth most viewed Royal wedding ever.

In the UK, about 21 million saw the ceremony, while an estimated 20 million people watched it in the United States – despite it being early morning there.

Many Britons celebrated in the most traditional way – not with a glass of champagne but by making themselves a nice cup of tea.

As many as 500,000 kettles were boiled immediately after the ceremony.

But although the sun shone for the happy couple yesterday, it seemed the weather was not hot enough to break Royal records.

Temperatures were just shy of 70F. For the 1981 wedding of Prince Charles and Princess Diana, the mercury hit just under 76F – the hottest Royal Wedding on record.