Billie Eilish is showing fans how the future Grammy winner looked as a precious toddler in an amazing IG throwback photo to celebrate turning 19.

Billie Eilish may sing about “My Future” in her July 2020 single, but she’s looking back at the past as she turns 19-years-old. The singer took to her Instagram account on Dec. 18 to celebrate her birthday with an adorable throwback photo of her as a toddler. The future superstar had the same expressive big blue eyes that she has today. But unlike her black and neon green hair that she has rocked for the past year, Billie had sweet strawberry blonde wisps sticking out from under a cute pink sun hat.

It looked like toddler Billie had just finished eating some chocolate…or possibly playing with dirt…as dark smudges could be seen around her lips, lowers cheeks and chin against her fair skin. She was wearing a cute printed long sleeve children’s shirt with little colorful squares featuring everything from baseballs to open books to polka dotted animals. 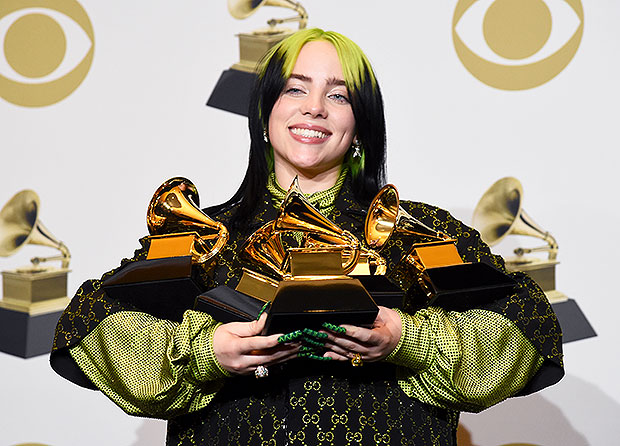 Billie simply captioned the photo “19” in honor of her new age, as she came into the world as Billie Eilish Pirate Baird O’Connell on Dec. 18, 2001. The singer was born in Los Angeles and raised in the Highland Park area of the city. She still lived at home under her parents Maggie and Patrick‘s roof when she wrote her Grammy winning 2019 debut album When We All Fall Asleep, Where Do We Go?, which she penned along with her older brother Finneas O’Connell, 23.

Writer/producer/singer Finneas shared his own tribute to his sister, posting a more recent video of her at the piano appearing to be playing around with a new composition. “Happy 19th birthday Billie! It is the privilege of my life getting to be your brother and making music with you is my greatest joy. I have been so lucky in unlucky times,” he wrote in the caption. Billie commented “I love you!” to her number one fan and collaborator.

The little girl seen in Billie’s throwback photo would grow up to achieve such greatness before even spending two decades on Earth. In Feb. 2020, Billie swept the Grammys, winning Best New Artist, Best Song and Record for “Bad Guy,” and Best Album for When We All Fall Asleep, Where Do We Go?, which also took Best Pop Vocal Album honors. That was a pretty hefty achievement for someone who less than two months prior to the ceremony was just 17-years-old. In 2021 she’s up for more Grammy awards, receiving nominations for Best Song, Best Record and Best Pop Vocal performance for her song “everything i wanted.”