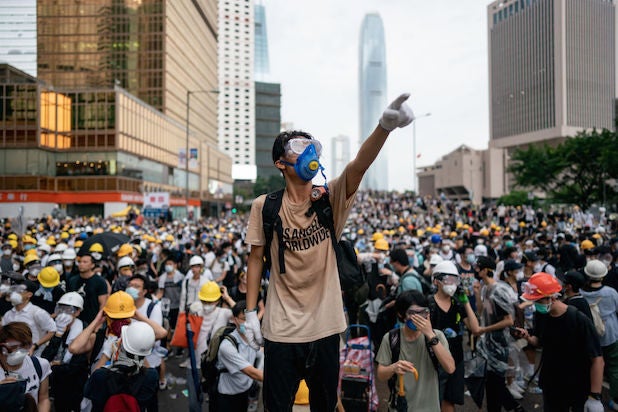 Gaming giant Blizzard Entertainment has placed a one-year ban on “Heartstone” player Ng “Blitzchung” Wai Chung for yelling “Liberate Hong Kong! Revolution of our times!” during a post-match interview on Sunday. The Hong Kong native was wearing a mask and goggles, the trademark look of Hong Kong pro-democracy protestors, during his interview.

Blizzard Entertainment, a subsidiary of Santa Monica-based Activision Blizzard, banned him from all “Heartstone” tournaments for the next year for his comments. The company pointed to a rule barring players from making comments that “brings you into public disrepute, offends a portion or group of the public, or otherwise damages Blizzard image.” The company is also declining to pay Ng the $10,000 he’d already won for participating in a recent high-level tournament, according to Bloomberg.

A clip of his interview with esports site Inven Global can be seen here:

Blizzard did not immediately respond to TheWrap’s request for comment.

“While we stand by one’s right to express individual thoughts and opinions, players and other participants that elect to participate in our esports competitions must abide by the official competition rules,” Blizzard told The Verge on Tuesday morning.

Blitzchung shared a statement with Inven Global before Blizzard issued its ban, saying he knew his comments could put him in danger, “but I think it’s my duty to say something about the issue.”

Heartstone, the game Blitzchung was playing, is an online card and strategy game where players build a deck of magical cards with various abilities and attributes and battle an opponent in 1-on-1 matches. The game is based on “World of Warcraft” and is one of the most popular games that’s streamed in the world.

Brian Welk contributed to this report.