Twenty years have passed since Will Smith played the incomparable Muhammad Ali in Michael Mann’s movie Ali. Now, in another stirring biopic, he plays a man no less driven in the quest for sporting greatness and no less successful in finding it.

Yet Richard Williams didn’t crave greatness for himself. He had a vision for his daughters Venus and Serena, which began to take shape even before they were born.

King Richard, which had a gala screening at the London Film Festival last night, tells the extraordinary tale of one man’s obsession, of how a pair of tennis superstars were forged in the crucible of their father’s white-hot ambition.

At the end of the film, with Venus (Saniyya Sidney) still only 14 but already flying towards the sporting stratosphere, a series of captions tell us what happened next to her and her younger sister Serena (Demi Singleton).

But then we already know that. The subsequent credits tell us something much more revealing, that the executive producers of this film were… Venus and Serena Williams. 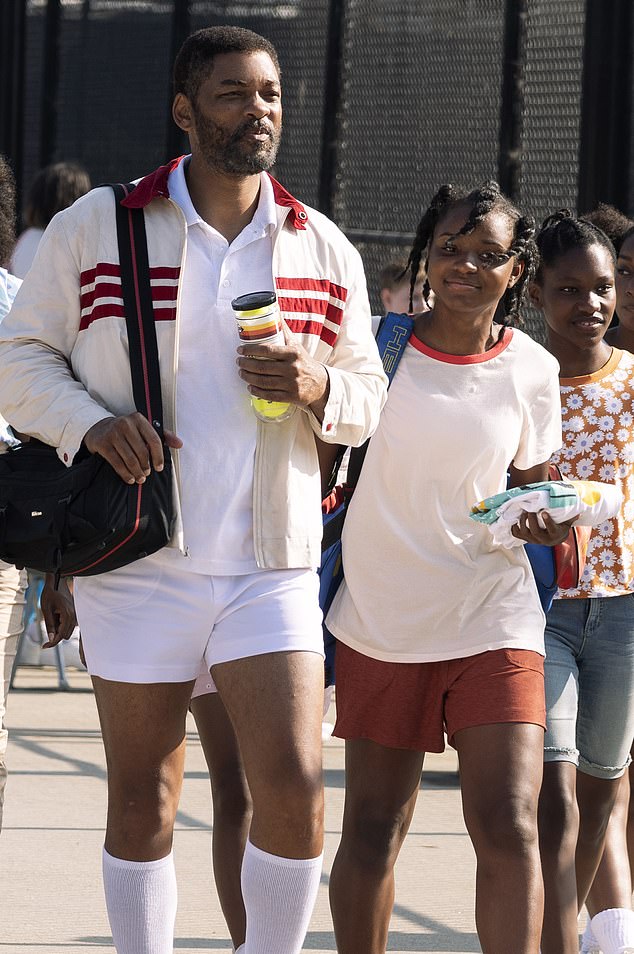 King Richard, which had a gala screening at the London Film Festival last night, tells the extraordinary tale of one man’s obsession, of how a pair of tennis superstars were forged in the crucible of their father’s white-hot ambition, writes Richard Viner

Their association explains why Richard is presented as a kind of superhero. Maddeningly stubborn, and flawed in other ways too, but a superhero nonetheless. The whiff of hagiography rises from this film like puffs of chalk from the Wimbledon baseline.

At well over two hours, it is also far too long; if only there were some sort of cinematic tie-break to stop films going on and on like this. Yet despite all those reservations, I enjoyed King Richard. For anyone who loves sport, it’s an irresistible story.

And Smith is terrific in the title role, nailing Richard’s speech pattern, as well as the slightly stooped and bandy-legged lope that has been a regular sight at tennis tournaments for the past 25 years.

At the start of the film, all he has is a precision-tooled plan and plenty of patter.

‘I’m in the champion-raisin’ business,’ he says, believing it with all his heart as he drives his prodigies in his battered VW van from their humble home in Compton, California – effectively a black ghetto – to the ramshackle public tennis courts. There, they have to brush away the dead leaves before they can play and suffer the unwanted attentions of some local hoodlums, who beat Richard up whenever he confronts them.

Although he has always coached the girls himself, the next phase of the plan is to find a professional to take over.

He has Venus and Serena brochures printed and eventually, through sheer doggedness, gets Pete Sampras’s coach involved. But the watershed moment is when Rick Macci (Jon Bernthal), the man who has steered Jennifer Capriati’s career, invites the whole Williams family to live at his plush academy in Florida.

Even then Richard never cedes control. He insists that his girls must get an education too, that scoring straight. As is part of the plan as much as winning in straight sets. Politeness and dignity matter as well. 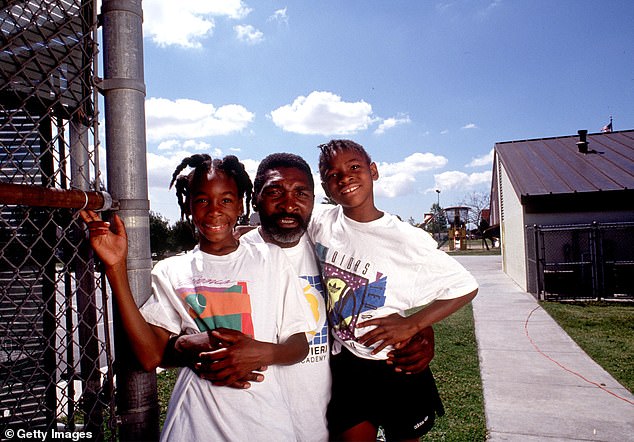 Richard  Williams with Venus and Serena in 1991. Their association explains why Richard is presented as a kind of superhero. Maddeningly stubborn, and flawed in other ways too, but a superhero nonetheless.

And to Macci’s disbelief, he won’t let his girls play junior tennis, the conventional gateway to turning pro. He is an absolute monarch, and an absolute one or two other things too, causing his wife Oracene (Aunjanue Ellis) finally to lose her temper.

It is only then we learn she has also played a formative role, correcting some of his missteps.

For the most part, the focus is on the older sister. Serena feels overlooked, but Richard assures her that while Venus will one day be the number one player in the world, she will become the greatest of all time.

This is powerful stuff and I confess that I wiped away a tear once or twice, but frustratingly, Reinaldo Marcus Green’s film doesn’t land nearly as many emotional aces as it should.

Most great sporting stories are about challenges overcome, especially in the case of the Williams sisters, principally because of their colour and background. But there is amazingly little racism or snobbery in King Richard, and that can’t be because it didn’t happen.

Instead, doubtless with the sisters’ support, Zach Baylin’s screenplay concentrates on the closeness and warmth of the extended Williams family (both parents had children by other partners), without ever really explaining why Richard chose Venus and Serena, or so it seems, as his only champion-raising projects.

Then again, maybe this film, and the way the story is told, was part of the masterplan, too.