Watching people play Snapchat’s new Snappable games is downright hilarious. If you’ve managed to catch a glimpse of someone mid-game, they were probably contorting their face in a not-so-graceful manner while holding their phone close to their head. It’s a wild sight to see, really. If these games haven’t shown up in your app already, you probably have some major FOMO — and you may also be wondering why you don’t have Snappable Snapchat games yet. Don’t worry, though, because I’m here to help.

The first reason why you may not have Snappable Snapchat games yet could be because your Snapchat app isn’t totally updated. Even if you think it’s already completely up-to-date, just take a second to double check. To do so, navigate to your smart phone’s settings, and update your Snapchat app. Then, open Snapchat and navigate to the Snappable games lenses. There’s a likely chance you’ll end up finding them there. Problem solved.

The other reason why you may not be able to see Snappable games could be because you aren’t looking in the right place. To do so, first navigate to Snapchat’s selfie cam. Then, tap the screen for Lenses, and you’ll find Snappables in Snapchat’s Lens Carousel to the left of the circular capture button (as opposed to the right side; that’s where World and face Lenses are located). You should find your Snappable games there, and all will be right in the world. Game on, friends. 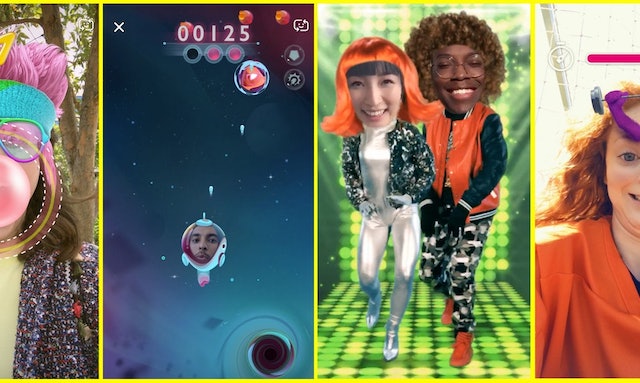 Snappable games give users the opportunity to choose from a variety of super addicting games — which filter in and out on a weekly basis — to avoid any boredom or repetition. Whether you’re required to lift a barbell with the power of your eyebrows, knock out some space invaders with some head movements, or blow kisses with some sheer lip power, they’re all unique and fun. Some games allow users to play individually and invite friends to challenge their high score, while others are multiplayer. I know for a fact that they’ll be my most-used procrastination tool for the foreseeable future. Being shy in public isn’t an option with these, so get your brows moving and your nose wiggling.

There’s clearly a lot going on in the world of Snapchat, because they also just released a new series of Snapchat Spectacles. These updated versions of the high-tech glasses are a little bit pricey, but they’re hella chic and totally worth it for any and all Snapchat addicts. The new Spectacles became available on the Spectacles website throughout the United States and Canada on April 26, and they’ll only cost you $150. Each pair comes with a charging case and a cable for the glasses, and users can choose from three different colors including onyx, ruby, and sapphire. They’re also super customizable, as two different lens shades are available for each color. You can basically get them however you want them. They’re sleek AF, and — most importantly — they’re water resistant. Say hello to my next summer splurge, because I’m about to be the world’s first Snapchatting mermaid.

Even so, Snapchat’s Snappable games are the best, so make sure you have them after updating your app. (Also, make sure you’re you’re looking in the right spot for them.) Once you start playing, I won’t show you any mercy. I take these games quite seriously. And if you’re planning on Snapchatting this summer, I highly suggest the new Snapchat Spectacles. The new ones are super cute, and you can customize them however you want to. I do wish that Snappable games were on the new Spectacles, though, because that would take them to the next level.