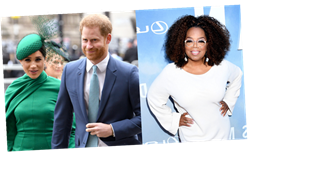 Stars are expressing their support for Meghan Markle amid her tell-all interview with Oprah Winfrey. Meghan and her husband, Prince Harry, opened up about their departure from the royal family and much more on Oprah With Meghan and Harry: A CBS Primetime Special on Sunday.

When Oprah asked Meghan if she was concerned about how the royal family would react to their interview, the duchess replied, “I don’t know how they could expect that after all of this time, we would still just be silent if there is an active role that the Firm is playing in perpetuating falsehoods about us. And if that comes with risk of losing things, I mean, there’s a lot that’s been lost already.”

And that’s not all she said. Meghan and Harry also opened up about the behind-the-scenes drama of their royal exit, questions regarding their son’s skin color, the sex of their forthcoming second child, and where their relationships stand now that they’ve left royal life behind.

After the bombshell interview, celebs and comedians and many others felt compelled to speak up in support of the couple or poke fun at the monarchy.

Royalty is not a shield from the devastation and despair of racism. #MeghanMarkle

DO THE CROWN NOW AND MEGHAN GETS TO PLAY MEGHAN.

I guess there’s no way to know if Meghan Markle is telling the truth about the Royal Family being a stressful nightmare.

Now to Google “whatever happened to Princess Di”

If Oprah ever interviewed me, I too would dime out my whole family.

Harry: The family suggested that "[Meghan] carry on acting" because there wasn't enough money to pay for her.

WHUT? The Queen literally has a gold-plated piano. pic.twitter.com/9gduslOoGA

Of every shocking element of the way Harry and Meghan and Archie were treated by "the firm," the idea that they would be stripped of security at a time when they were under siege with racist death threats is simply monstrous.

The fact that his brother allowed the “firm” to take away his ONLY brother’s security (a fucking prince) is crazy to me.

I wouldn’t expect his father to do anything. But his brother…damn.

"I don't know how they could expect that, after all of this time, we would still just be silent if there is an active role that 'The Firm' is playing in perpetuating falsehoods about us." – Princess Meghan 👏🏾👏🏾🗣
(“The Firm" is a common nickname for the royal family)

30 years since Princess Diana spoke of her mental harm & the lack of support from the Firm, and #MeghanMarkle says her need for help with her mental health were brushed away as “it wouldn’t look good”
Some learn nothing from history#OprahMeghanHarrypic.twitter.com/ofjhbacUke

Meghan had already received support from stars like Gabrielle Union, Janina Gavankar and Jameela Jamil, who defended her on Thursday against allegations of bullying.

Last week,The Times published an article which claims that the Duchess of Sussex bullied her royal aides and made them cry. A spokesperson for Meghan and Harry denied the allegations in a statement to ET, calling the allegation a “calculated smear campaign based on misleading and harmful misinformation.”

Sources informed the publication that a bullying complaint was filed against Meghan by a royal staffer in 2018. The complaint allegedly claimed she “drove two personal assistants out of the household and was undermining the confidence of a third staff member.” Following the allegations, Buckingham Palace announced it would be launching an internal investigation.