Tully is the film for which, as you may have read, the willowy Charlize Theron piled on three stone.

Apparently, she routinely set her alarm so she could trough macaroni cheese at 2am, which seems a bit extreme, and reminded me of Laurence Olivier’s famous quip when he heard that Dustin Hoffman had been depriving himself of sleep in preparation for a scene in the 1976 film Marathon Man: ‘My dear boy, why don’t you try acting?’

When I saw Tully, however, my scepticism vanished as quickly as the cream puffs in her fridge. It’s true that even a somewhat flabby Charlize Theron is still what most sentient beings would call beautiful, and that Hollywood on the one hand, and the real world on the other, have two quite different notions of what constitutes seriously out of shape.

But if her weight gain helped her to produce this wonderfully engaging performance, at the heart of Jason Reitman’s funny, well-observed, sharply-scripted and thought-provoking film, then more power to her. She is clearly made of stern stuff. Two-thirds stern stuff, anyway, and a third macaroni cheese.

She plays Marlo, who at the beginning of the film is heavily pregnant with her third child. The pregnancy wasn’t planned and the prospect of another child fills her with dread, not least because her son Jonah (splendidly played by Asher Miles Fallica) suffers from what most of us would identify — even though, mysteriously, nobody in the movie does — as a form of autism.

For Jonah’s teachers, he’s an ‘out-of-the-box kid’. For doctors, he’s simply ‘atypical’. For Marlo, he’s much-loved and very precious, and also a nightmare, prone to sudden tantrums when his young life loses its sense of order.

Jonah’s older sister, eight-year-old Sarah (Lia Frankland), is a calmer presence, but even so, how will Marlo cope when she has the baby?

Her mordant sense of humour — ‘such a blessing’, she says of the impending birth, meaning it not one iota — probably won’t be enough.

Nor will the support of her husband Drew (Ron Livingston), a decent fellow unhelpfully addicted to video games. Marlo needs back-up and her wealthy brother, concerned and condescending in just about equal measure (and with a hilariously spoilt wife), offers to provide it.

Formidable foursome with a sting in their tale 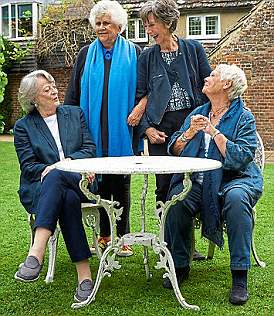 There is nothing very original about this documentary, which will find its way to our TV screens following a short cinema run, but what a pleasure it is, listening to Dames Judi Dench, Maggie Smith and Eileen Atkins, all aged 83, and Joan Plowright, five years their senior, swapping theatrical reminiscences.

Director Roger Michell doesn’t have much to do except sit back and listen — although that doesn’t stop him getting the salty edge of Dame Judi’s tongue.

But it’s always with a twinkle, and, as we’ve seen in dozens of chat shows, infectious, watery-eyed mirth bubbles up in her at the drop of a funny anecdote.

Mind you, she doesn’t suffer condescension very gladly. Last year, a paramedic, aged ‘about 17’, treating her after she was ‘stung on the bum by a hornet’, said to her: ‘What’s our name?’ And then: ‘Have we got a carer?’

She’d just done eight weeks in A Winter’s Tale and it’s hard to think of anyone of her generation less in need of a carer.

The rapport between this formidable quartet is palpable, and they all contribute some delightful stories.

And when we’re not laughing with them, it’s quite fun to chuckle affectionately at them. ‘You have to move with the times,’ says Dame Maggie, sounding like Queen Victoria’s slightly posher aunt. A treat.

He says he’ll pay for Marlo to have a night nurse, to take some of the strain when the baby arrives.

A choppily edited montage sums up how onerous the strain is. We see Marlo gloomily breast-feeding, expressing milk, changing nappies, punctuated by an occasional fleeting kiss on the top of her head when Drew leaves for work or arrives home.

Mercifully, I wasn’t watching with my wife, who might have been entitled to give me a dig in the ribs, remembering the arrival of our third child 19 years ago. I prefer to recall that I applied my shoulder fully to the wheel, but that’s what this film does to parents; it makes you think back, smiling in recognition one minute and wincing the next.

Anyway, just as Marlo seems about to cave in, with the added blow that Jonah’s school can no longer accommodate him, along comes the ‘night nurse’, Tully (Mackenzie Davis), a sunny, svelte 26-year-old with a disconcerting habit of wearing crop-tops and a precociously reassuring manner.

Cinematic nannies generally fall into two camps: they either tend towards Mary Poppins and Mrs Doubtfire, or towards Rebecca De Mornay’s Peyton Flanders in The Hand That Rocks The Cradle (1992). Tully seems so much the former, appearing almost too good to be true, that it’s easy to believe she might end up being the latter.

But indubitably she brings happiness and purpose back into Marlo’s careworn life, even into her sagging sex life.

Of course, all is not exactly as it seems. It rarely is in the movies. But this is still in many ways an everyday, universal tale of motherhood, from which Reitman has ingeniously crafted a compelling film.

The writer is Diablo Cody, who teamed up with Reitman 11 years ago to make the excellent Juno. That too was about an unwanted pregnancy, but from the perspective of a 16-year-old free spirit, not a middle-aged mum. Significantly, Cody was childless when she wrote Juno and she’s now a mother of two. It shows.

I Feel Pretty is another film about a woman’s self-esteem, but just as there’s more to Tully than meets the eye, with I Feel Pretty there’s less.

Amy Schumer plays Renee, who feels overweight and unattractive until she falls off an exercise bike, bangs her head, and comes round convinced that she’s gorgeous. Before the personality change she stays in the shadows; after it, she bursts out of them, and bags her dream job as a receptionist at the glossy cosmetics company she worked for as a lowly data processor.

Soon, squeaky-voiced company CEO Avery LeClaire (Michelle Williams, having a high-pitched ball) realises that Renee has keener ideas about the marketing of a new line of make-up, targeted at ordinary women, than any highly-paid executive.

The storyline might remind you of the 1988 film Big, and I Feel Pretty acknowledges the debt. It is while watching Big that Renee feels inspired to pray for a miracle. 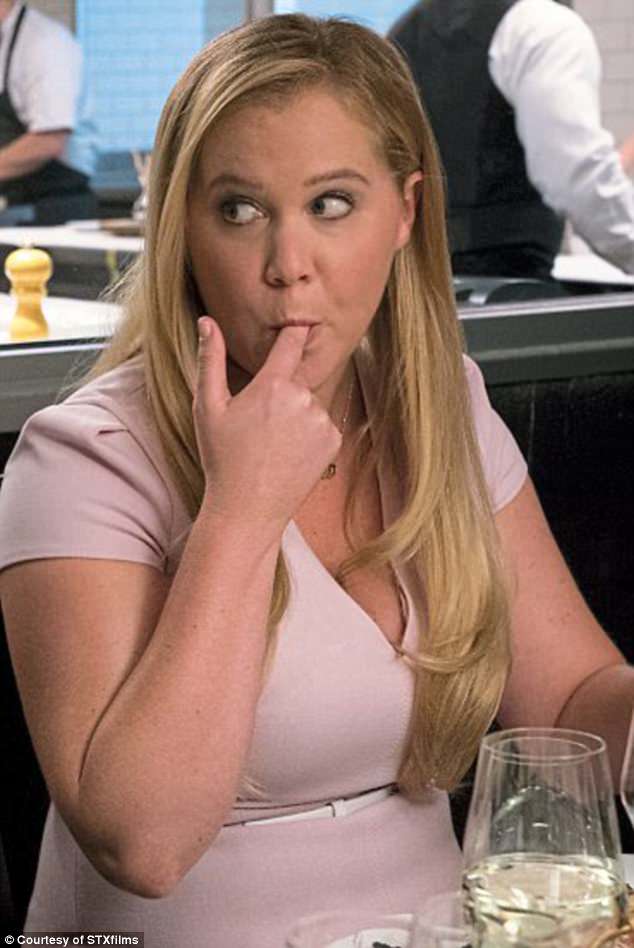 Amy Schumer plays Renee, who feels overweight and unattractive until she falls off an exercise bike, bangs her head, and comes round convinced that she’s gorgeous

After that miracle strikes, the film follows a predictable and derivative course, as Renee first lands then loses a nice boyfriend (Rory Scovel), ultimately learning lots of profound lessons about beauty being only skin deep.

Of course, Schumer is a fine comic actress and does her considerable best with patchy material. There are other pleasures too, with roles for supermodels past and present, Lauren Hutton and Naomi Campbell.

But I Feel Pretty, a debut feature for writer-directors Abby Kohn and Marc Silverstein, never quite becomes the joyous, feelgood comedy-with-a-message it sets out to be. It could have done, dare I say, with a makeover.

The unlikely runaways who just might steal your heart

British writer-director Andrew Haigh makes films about intense relationships. You could say that about many film-makers, but with him it’s especially so.

His acclaimed 2011 picture Weekend was about two gay men getting to know each other over the course of 48 hours, while 2015’s engrossing 45 Years was a forensic study of a long marriage, for which Charlotte Rampling received a deserved Best Actress nomination in the Academy Awards.

In Lean On Pete, he focuses on an American teenager called Charley (Charlie Plummer), whose mother has long since abandoned him. Charley’s key relationships are first of all with his feckless father (Travis Fimmel), then with Del, a dissolute racehorse trainer played (one is tempted to add ‘obviously’) by Steve Buscemi, who takes Charley under his decidedly tattered wing. 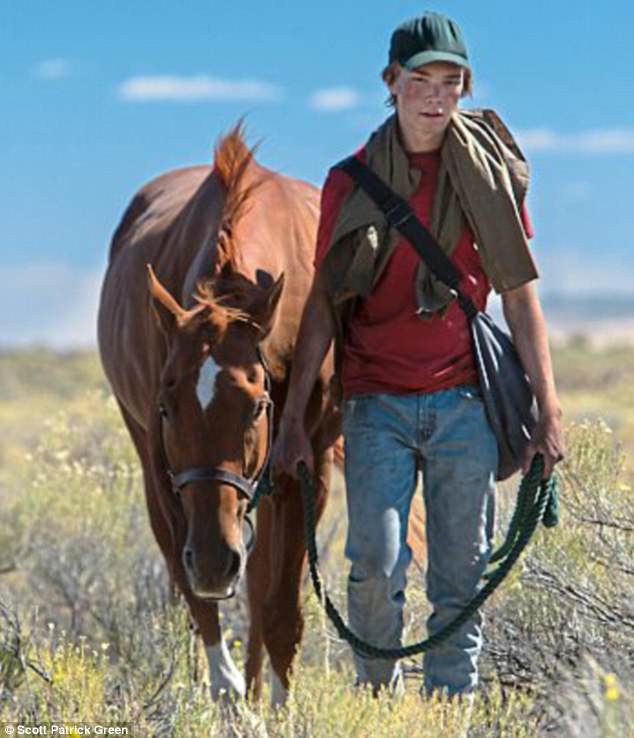 Lean On Petefocuses on an American teenager called Charley (Charlie Plummer), whose mother has long since abandoned him.

But eventually Charley sees there’s no future for him with Del, and his kindly but world-weary stable jockey (Chloe Sevigny).

The only reliable creature in his universe is the titular Lean On Pete, a horse destined for a Mexican dogfood factory until Charley absconds with him, and the unlikely pair take off on an epic road trip in the hope of finding one of the boy’s long-lost relatives.

The film reminded me a little in places of Ken Loach’s Kes, and also, in its visual hymn to the wide-open spaces of the United States, of Andrea Arnold’s American Honey.

Perhaps most of all, though, it evokes those Sunday afternoon Disney films about a gutsy teenager and his four- legged companion, crossing the prairies.

Or would, if poor Charley didn’t fall headlong into quite so many horrible misadventures, of the kind those wholesome Disney TV movies never touched.

It’s not a flawless film. Charley’s bad luck begins to seem preposterous, and there’s no real explanation of why this kid, after such a miserable start in life, has ended up so polite, so likeable, and on the whole, so virtuous.

But then that’s why we engage with him, and yearn for his fortunes to turn. It’s a tremendously watchable performance from Plummer, and a film well worth seeing.