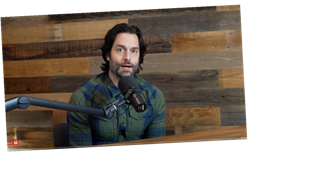 Chris D’Elia is opening up about his sexual misconduct allegations. The 40-year-old comedian posted a YouTube video on Friday, claiming that all his relationships “have been consensual and legal.”

“I know it looks bad,” he said, explaining how he further wanted to set the record straight at the time of the allegations, but was taking time to be with his family. Multiple women made allegations of sexual misconduct and grooming against D’Elia in June. He denied the allegations.

“What I have come to understand is, this was always about sex to me…Sex, it controlled my life,” he stated. “It was the focus. It was my focus all the time. And I had a problem, and I do have a problem…I need to do work on that.”

He went on to explain how early in his stand-up comedy career he felt “lucky” to not “need to work as hard” to have sex after he gained notoriety. He claimed he would get “at least 50 messages after a show each city a night. And I would reply to all of them.”

“I thought in my mind that being straight-up with these women was the right thing to do. I’d say ‘Hey, come to my hotel room and let’s have sex. Let’s make out. Let’s do this, let’s do that.’ And that was what I thought was right,” he said. “I realized through all of this that doing that is treating sex like it’s casual and being flippant with people.”

The former You actor then shared that he would think about sex all the time, “It became a lifestyle that I didn’t know how to stop.” He also admitted that he’s cheated on his past girlfriends and even his current fiancée.

“And this is my dream girl. This is the girl I want to be with for the rest of my life, and even that wouldn’t stop what I was doing,” he said, before saying once again apologizing and that he is now “doing the work” to be better.

D’Elia’s video comes eight months after he was first accused of sexual misconduct and grooming by multiple women, some of whom claim they were underage at the time. The actor denied any illegal or nonconsensual activity in a statement to ET at the time, but apologized for getting “caught up in my lifestyle.”

“I know I have said and done things that might have offended people during my career, but I have never knowingly pursued any underage women at any point,” he said in his statement. “All of my relationships have been both legal and consensual and I have never met or exchanged any inappropriate photos with the people who have tweeted about me.”

“That being said, I really am truly sorry. I was a dumb guy who ABSOLUTELY let myself get caught up in my lifestyle,” he added. “That’s MY fault. I own it. I’ve been reflecting on this for some time now and I promise I will continue to do better.”

Following the allegations, he was replaced in the zombie movie Army of the Dead. Netflix also scrapped plans for a prank show starring D’Elia and Bryan Callen.