Chrissy Teigen got mom-shamed this week after posting an adorable video of her 3-year-old daughter at the dentist’s office.

In the clip, Luna intently cleans the teeth of a stuffed animal. “So proud of my toons at her first dentist appointment!” Teigen wrote in the caption.

But some commenters tried to brush away the positive vibe.

“What age do they start over there? My daughter started seeing a dentist at a [year] old,” one wrote. Another told Teigen that she should have taken Luna as soon as she got her teeth: “Can’t believe that’s her first appointment.”

“Luna definitely should have seen a dentist multiple times by now as kids should go twice a year!” another of Teigen’s ever-present critics contributed.

Teigen was likely in France at the time for the Cannes Lions advertising event, but one could imagine her eyes rolling from there.

“Was waiting for this,” replied the model and “Lip Sync Battle” host, who is used to being publicly shamed for her parenting choices. “U guys never fail me.”

Some debate ensued over the right time to take a child to the dentist.

USA Today joined in as well, writing: “FWIW, Chrissy, the American Academy of Pediatric Dentistry says: ‘In order to prevent dental problems, your child should see a pediatric dentist when the first tooth appears, or no later than his/her first birthday.’ Sorry.”

But that organization offered nothing but support for Teigen on her Instagram page: “This is so great to see! Did you know that only 62% of children see a dentist from age 2-4? You’re helping this number grow! Did you also know that the majority of our pediatric dentist members are FEMALE! How cool, right?” 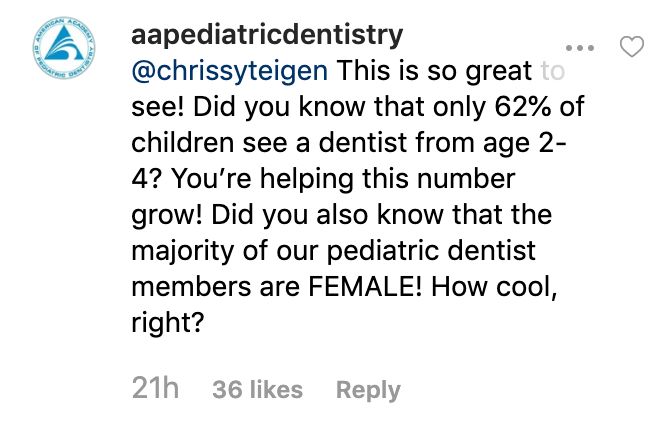