The presenter, 39,  donned an elegant black blazer, blouse and matching trousers, paired with stiletto heels for the memorial at St Luke’s and Christ Church in London’s Chelsea.

Her brunette tresses were worn sleek and straight and she sported a light dusting of make-up as she followed behind her 39-year-old former footballer husband of two years. 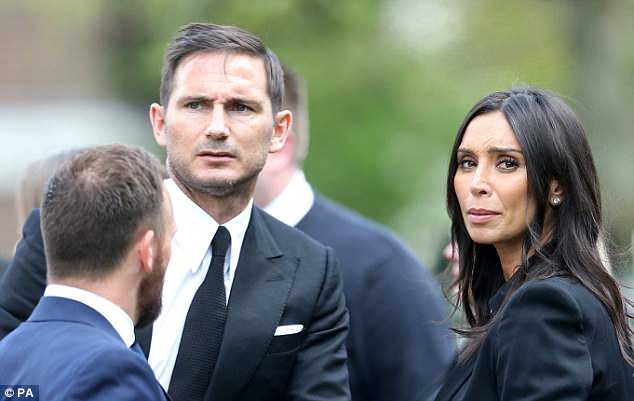 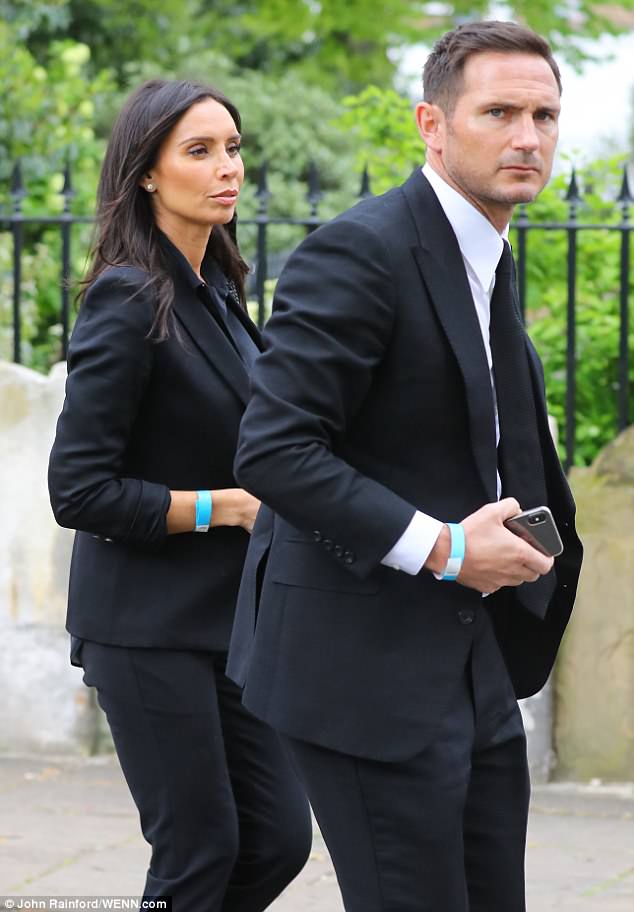 Chic: The presenter, 39, donned an elegant black blazer, blouse and matching trousers, paired with stiletto heels for the memorial at St Luke’s and Christ Church in London’s Chelsea

Frank donned a simple black suit, fitted white shirt and black tie for the funeral with the couple of eight eight years looking deep in thought as they walked into the church.

England manager Gareth Southgate joined the likes of John Terry and his wife Toni, , Les Ferdinand and Dennis Wise for the memorial. 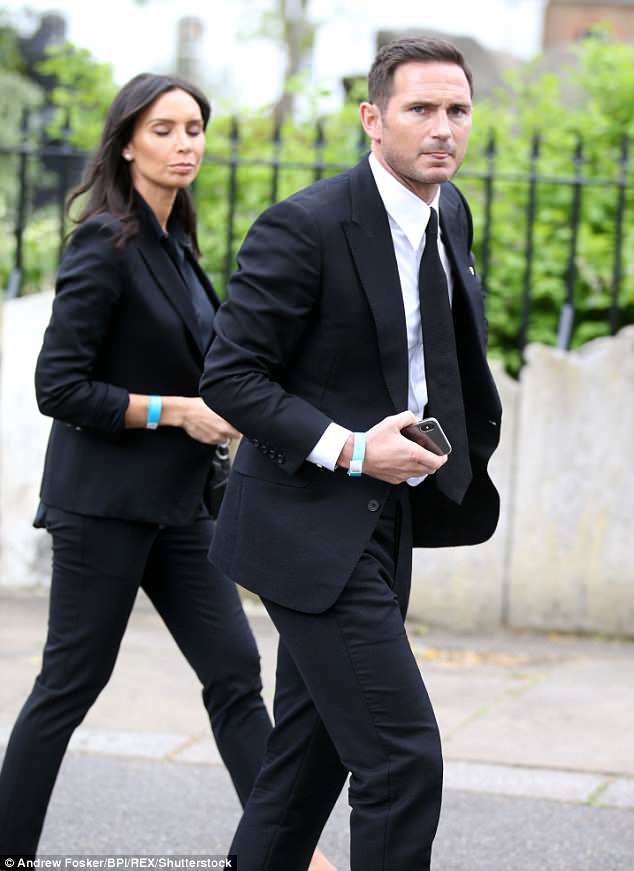 Together: Her brunette tresses were worn sleek and straight and she sported a light dusting of make-up as she followed behind her 39-year-old husband of two years 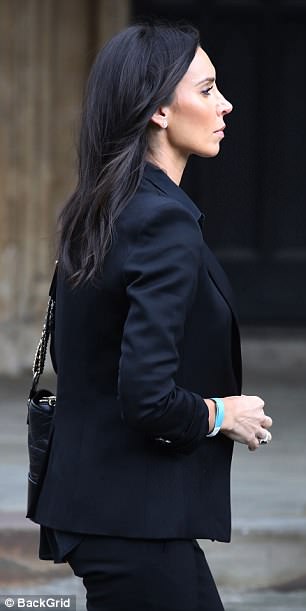 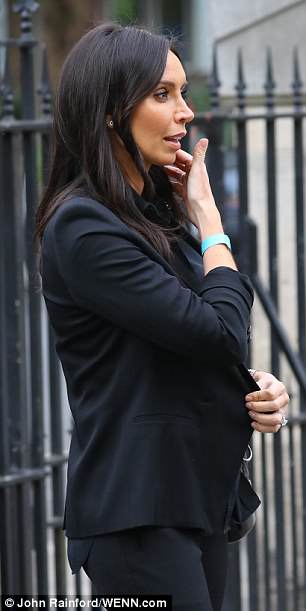 Thoughtful: Christine looked deep in thought as she attended the memorial service in Chelsea 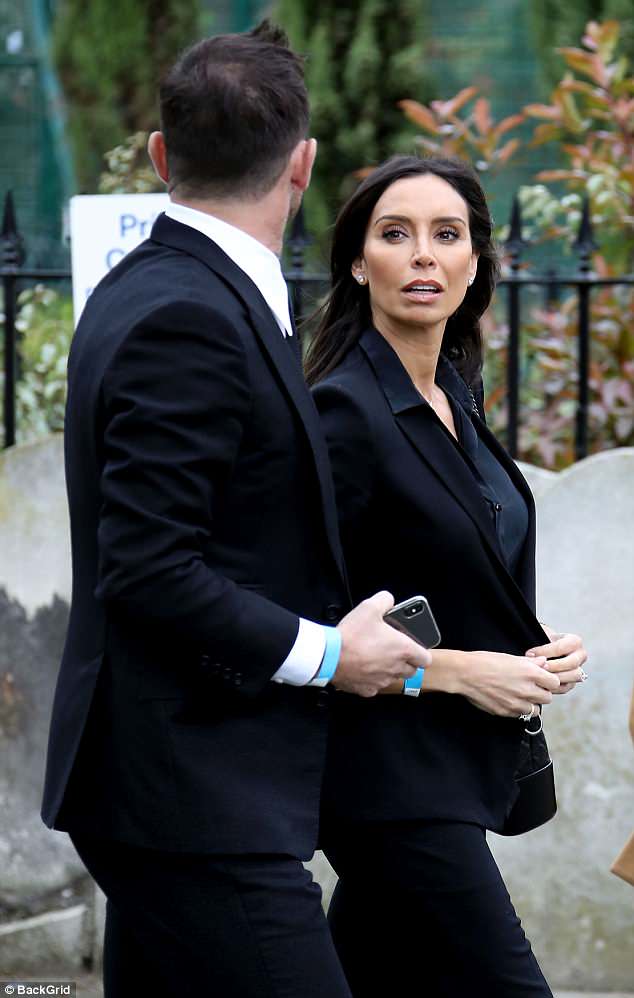 Chat; The brunette spoke to husband Frank as the pair made their way inside

Wilkins, who died at St George’s Hospital in Tooting, South London, on April 4, won 84 caps for the national side and continued working as a pundit for talkSPORT and Sky Sports before being taken ill a week before his death.

Wilkins – known in the game by his childhood nickname ‘Butch’ – played for 11 clubs and was on the coaching staff of several more. The former captain of Chelsea was described as an ‘absolute gentlemen’ and a ‘fierce winner’ 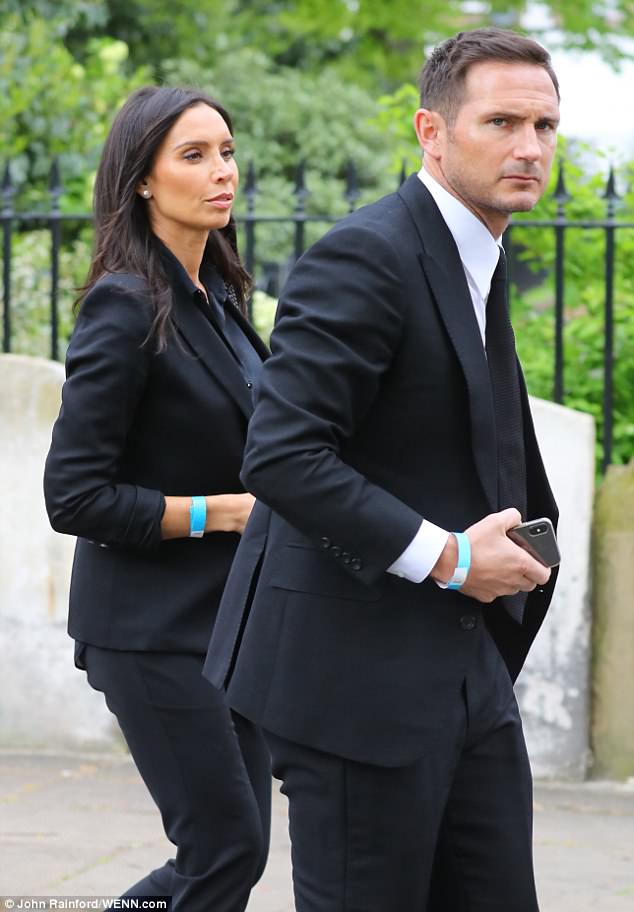 Close: The pair looked sombre as they walked into the church ahead of the service 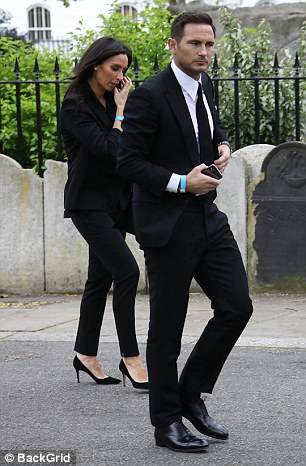 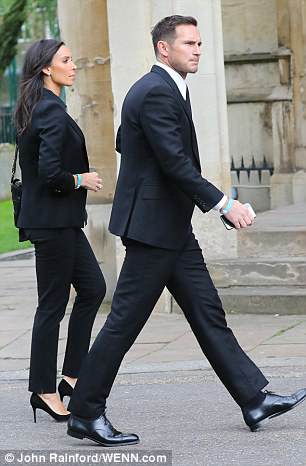 In sync; The couple looked focused as they headed inside the church 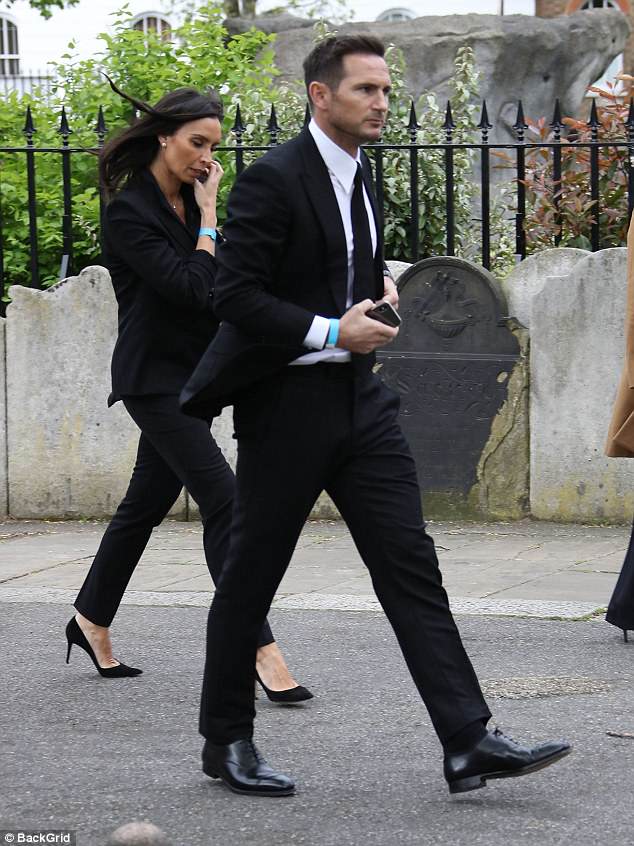 Dapper: Frank donned a simple black suit with matching tie for the service

Wilkins, who leaves behind his wife Jackie and children Jade and Ross, became the fourth player sent off while playing for England when he was dismissed in the 1986 World Cup finals in Mexico in a game against Morocco.

As reported by Mail Online, Wilkins was living apart from his wife of nearly 40 years at the time of his death but was believed to be close to patching things up before his tragic passing.

According to the Mirror he was given a secret family funeral near his £1.2million home in Cobham, Surrey, attended by his spouse and children. 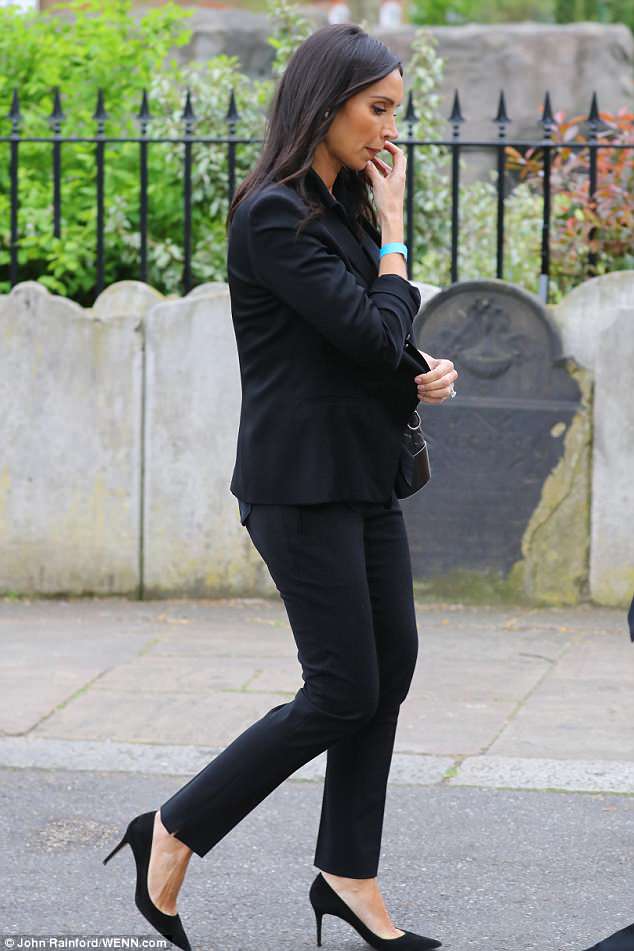 Elegant: Christine looked down as she walked along in London 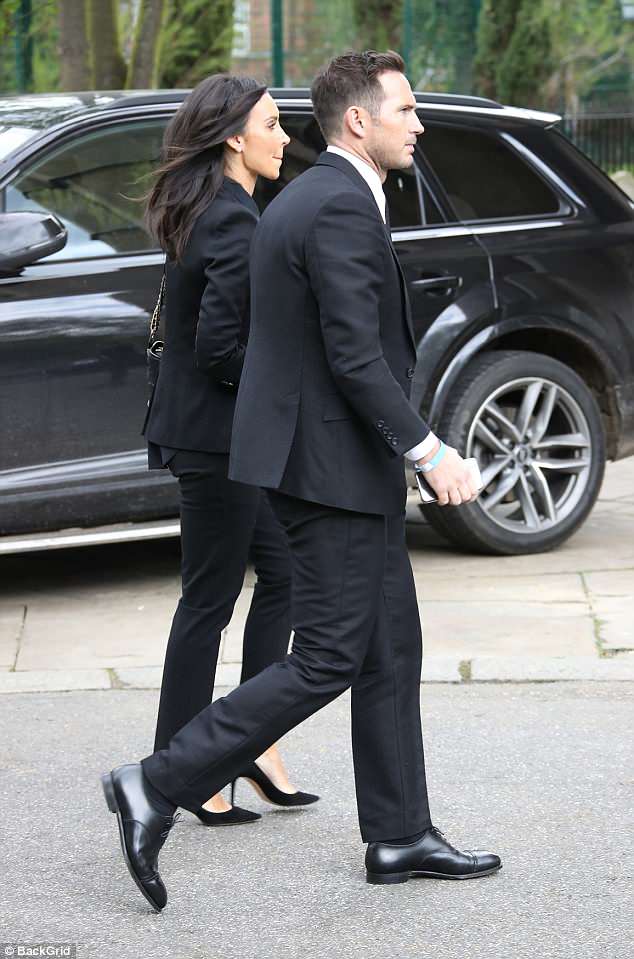 Support; The couple  were showing their support for the late football legend 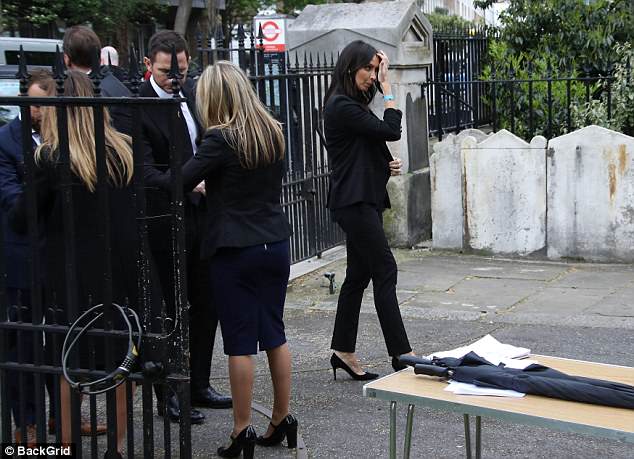 Focus; Christine and Frank made their way inside the church with fellow guests

During his career as a player, Wilkins won the FA Cup with Manchester United in 1983, scoring a memorable goal in the first tie against Brighton at Wembley, which ended 2-2. He also won the Scottish title with Rangers in 1989.

Following his death, his family said in a statement: ‘It is with great sadness we announce that Raymond Colin Wilkins (has) passed away. We would like to thank St George’s staff for the amazing work they have done to care for our beloved Ray.

‘We would also like to say thank you for the many goodwill messages we have received from Ray’s friends, colleagues and members of the public. Ray leaves behind his loving wife Jackie, daughter Jade, son Ross, and his beautiful grandchildren Oliver, Frankie, Ava, Freddie, Jake and Archie.’ 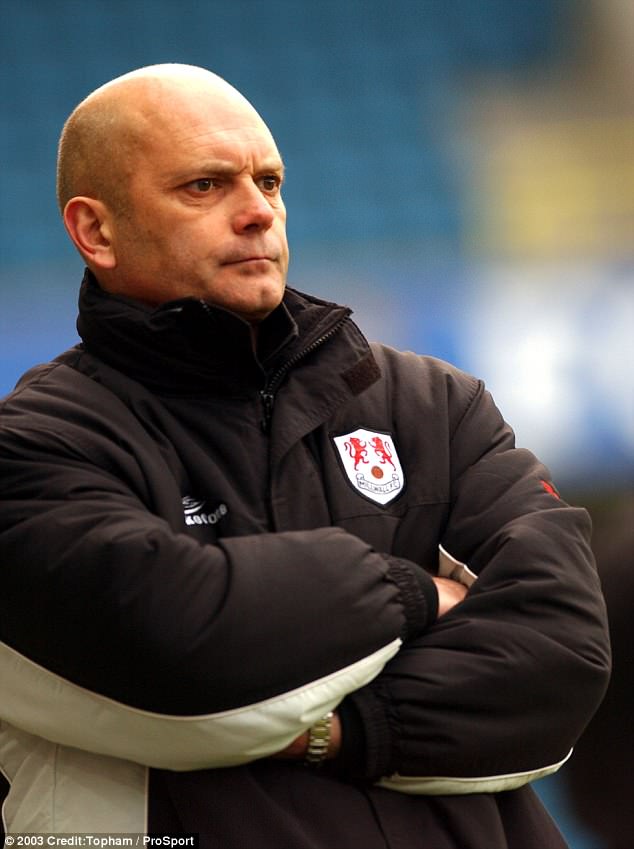