Christopher Plummer tributes are shared by Knives Out co-stars

Dame Julie Andrews has led tributes to her The Sound Of Music co-star Christopher Plummer, who has died aged 91.

The actor died at home on Friday in Connecticut, in the US, according to his manager.

Dame Julie, 85 – who starred opposite Plummer in the 1965 hit – labelled him a ‘consummate actor’ and a ‘cherished friend’. 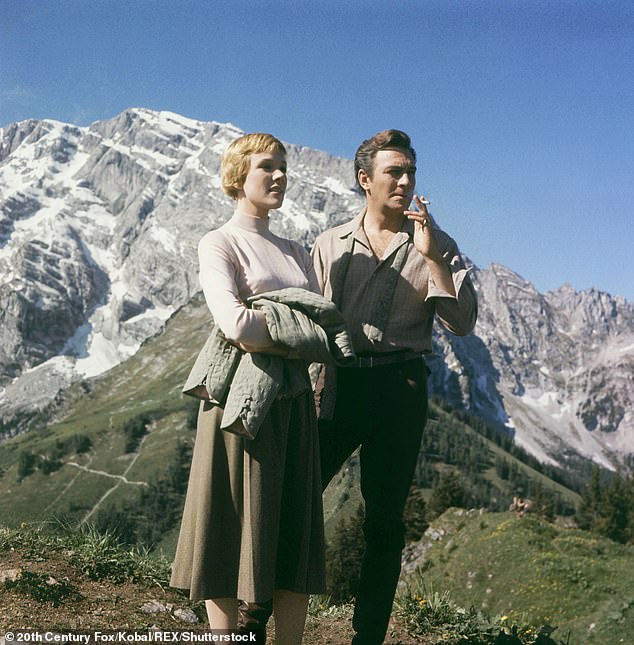 Her friend: Dame Julie Andrews has led tributes to her The Sound Of Music co-star Christopher Plummer, who has died aged 91. The actor died at home on Friday in Connecticut, in the US, according to his manager. Dame Julie, 85 – who starred opposite Plummer in the 1965 hit, labelled him a ‘consummate actor’ and a ‘cherished friend’ 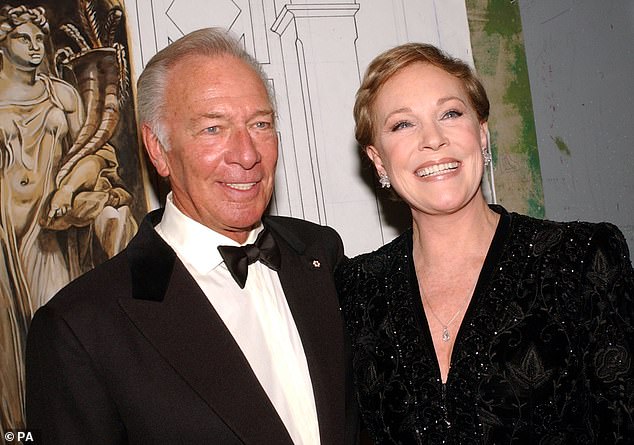 In a statement to the PA news agency, she added: ‘I treasure the memories of our work together and all the humour and fun we shared through the years. My heart and condolences go out to his lovely wife Elaine and his daughter Amanda.’

Plummer, a patrician Canadian has died at 91, it was shared on Friday.

His Knives Out co-star Chris Evans was one of the first to express his condolences.

He said, ‘One of my favorite memories from Knives Out was playing piano together in the Thrombey house between set ups. He was a lovely man and a legendary talent.’ 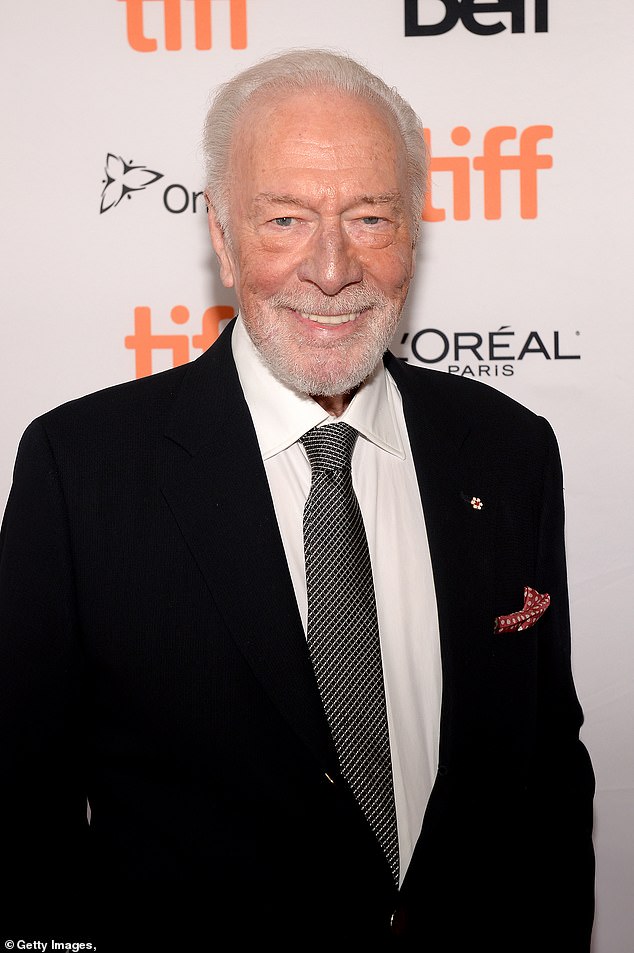 Sad loss: Plummer, a patrician Canadian has died at 91, his manager said on Friday; seen in 2019 at the Knives Out premiere in Toronto

‘My heart is broken, my dear Chris. I feel your loss deep inside. How lucky was I having you next to me in what’s been one the best experiences of my career.

‘Thank you always for your laughter, your warmth, your talent, your stories about Marilyn, the vitamins when I got sick, your patience, your partnership and your company. I will always think of you with love and admiration. Rest In Peace.’

Ridley Scott and his wife Giannina told The Hollywood Reporter, ‘What a guy. What a talent. What a life. And I was fortunate enough to work with him less than 2 years ago and had a wonderful experience. My heartfelt condolences go to Elaine He will be really missed.’ 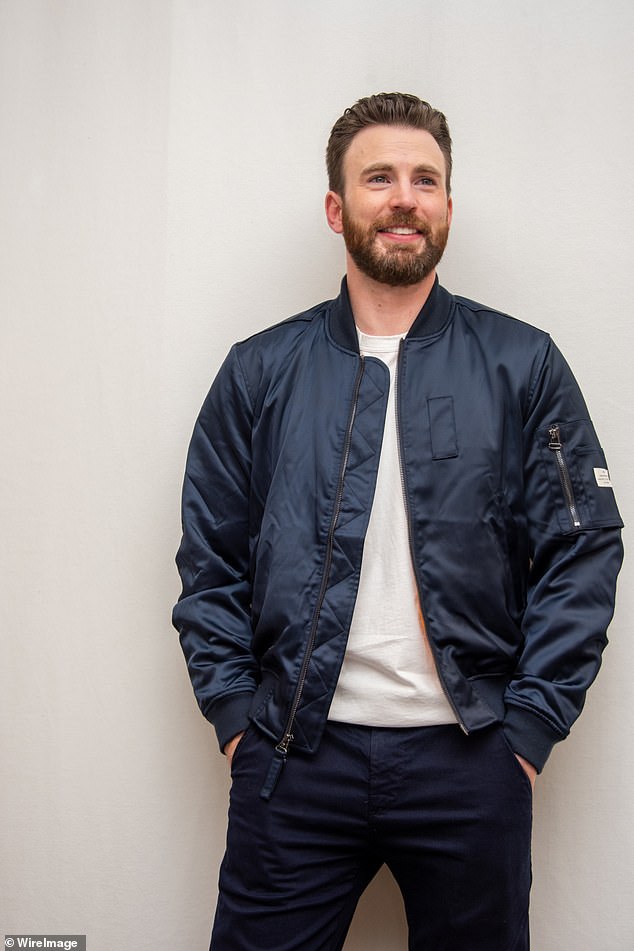 His friend: His Knives Out co-star Chris Evans was one of the first to express his condolences as he said, ‘One of my favorite memories from Knives Out was playing piano together in the Thrombey house between set ups. He was a lovely man and a legendary talent.’ Seen in 2019 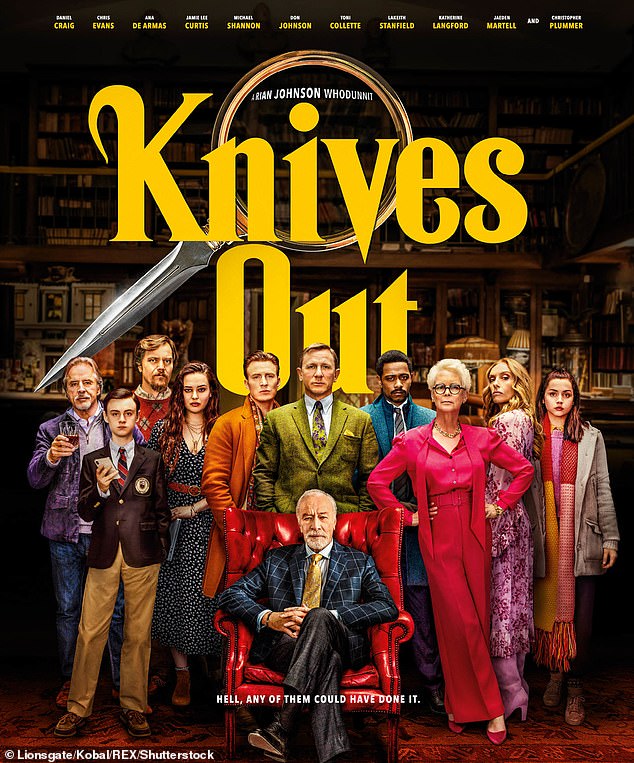 An all star cast: Chris and Ana were in KnIves Out with Plummer as well as Don Johnson and Jamie Lee Curtis

Dan Rather said, ‘Blossom of snow, may you bloom and grow, bloom and grow forever.’ RIP Christopher Plummer. You lit up screen and stage over a lifetime of art. My thoughts are with your family and friends.’

‘As with his work in the Last full Measure , His devotion to the work , with compassion, and discipline , lifted the spirit of others. Love you Chris . John Savage.’

Star Trek vet George Taki shared, ‘The Sound of Music is a sad one today as Christopher Plummer has left us today. He was giant of stage and screen, winner of an Academy Award for ‘Beginners.’ He died at age 91 with his wife of 53 years, Elaine Taylor, by his side. Rest in eternal music, Captain Von Trapp.’

Hawaii Five-O star Daniel Dae Kim wrote on Twitter, ‘We watched the #SoundOfMusic so much when I was a boy that he and the Von Trapps felt like family. Rest In Peace, legend.’

Anne Hathaway shared a long and loving note: ‘You were so kind to me when we worked on Nicolas Nickelby. I was 19, you were you; I was shaking in my Victorian boots, you were calm, steady, generous, and so, so funny.

‘It felt so special when it was you who handed my my Oscar a decade later. I was still the one shaking in my shoes; somehow you were still keeping me steady just with your formidable, warm, loving presence.

‘In between you played Lear–my heart still pounds thinking of all the poetry you captured–and you conjured the performance of a lifetime in Beginners. Before all that, you were already a legend so many times over. I hope you felt all the love you created.

‘Rest In Peace, Christopher Plummer. I love the way you lived, and the art you gave–both have inspired me to no end. I’m so happy to have gotten to spend time with you, and am so grateful for the memories.’

Joseph Gordon-Levitt said, ‘Christopher Plummer… one of the greats. <3.’ Rosanna Arquette said ‘love to Amanda,’ who was his daughter. 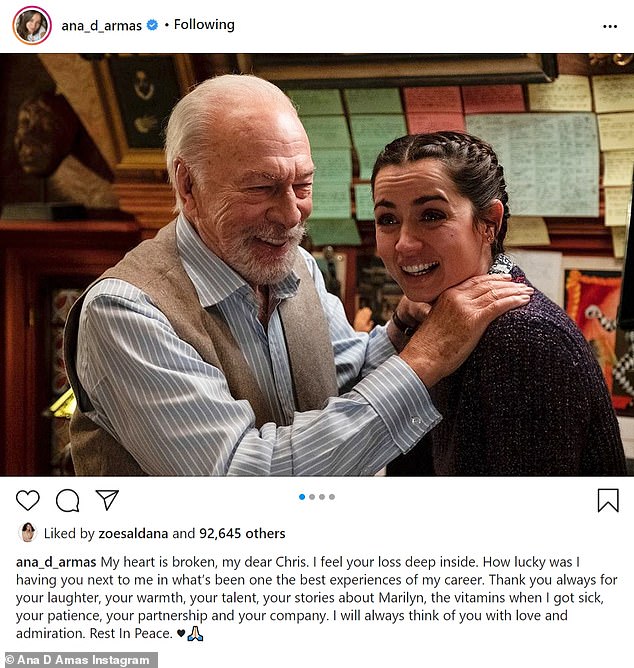 A sad loss: Another Knives Out co-star, actress Ana de Armas, also shared a note. ‘My heart is broken, my dear Chris. I feel your loss deep inside. How lucky was I having you next to me in what’s been one the best experiences of my career’ 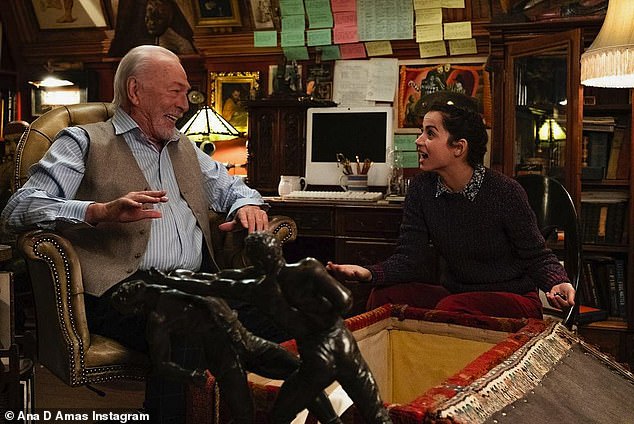 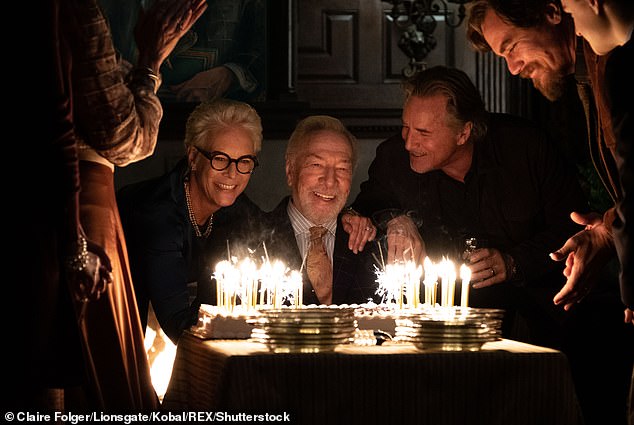 Curtis as Linda Drysdale, Plummer as Harlan Thrombey, Johnson as Richard Drysdale and Michael Shannon as Walt Thrombey Knives Out

The Sound of Music account tweeted: ‘We’re saddened to hear of Christopher Plummer’s passing. His legacy as our Captain will live on in THE SOUND OF MUSIC forever. Our thoughts are with his loved ones during this time.’

And The Academy added: ‘Christopher Plummer beguiled audiences across generations in memorable roles from Captain von Trapp in The Sound of Music to Harlan Thrombey in Knives Out. He worked steadily for 60+ years, winning a Best Supporting Actor Oscar in 2012 for ‘Beginners.’ He will be missed.’

Also among those paying tribute to the All The Money in the World star were British TV presenter Piers Morgan, and music producer Finneas O’Connell.

‘Chris was an extraordinary man who deeply loved and respected his profession with great old fashion manners, self deprecating humor and the music of words,’ wrote Lou Pitt, Plummer’s manager of 46 years, in a statement. 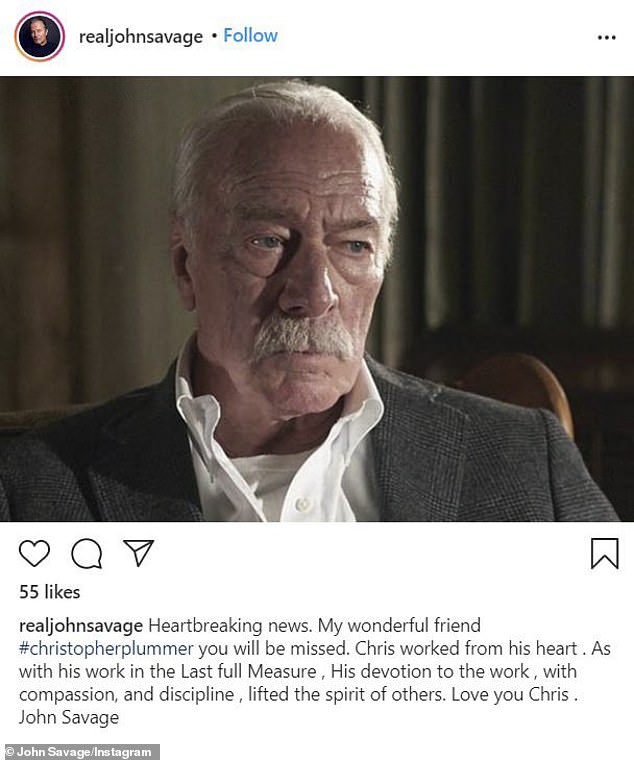 His co-star: Deer Hunter actor John Savage said, ‘Heartbreaking news. My wonderful friend #christopherplummer you will be missed. Chris worked from his heart. ‘As with his work in the Last full Measure , His devotion to the work , with compassion, and discipline , lifted the spirit of others. Love you Chris . John Savage’ 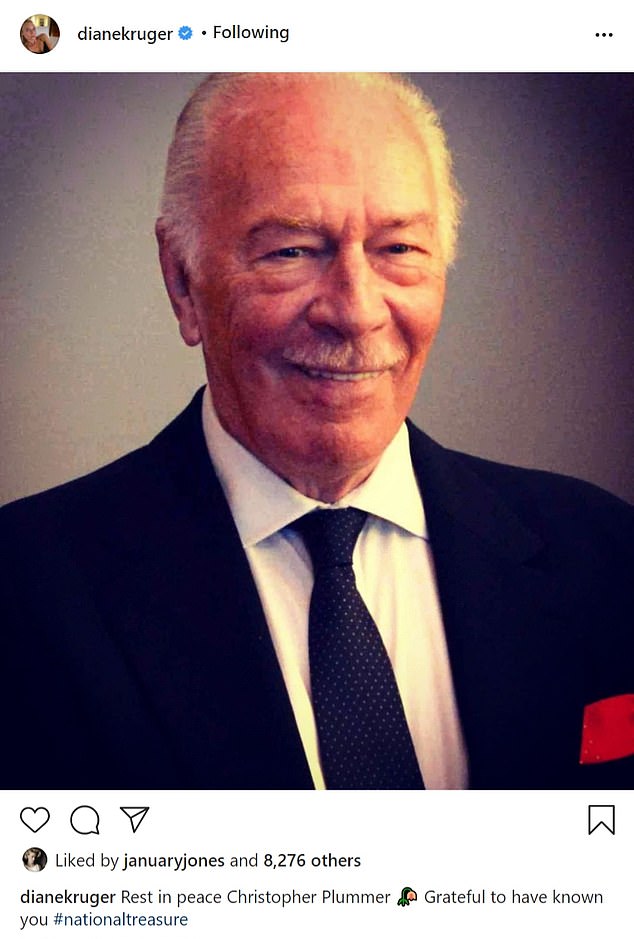 From the heart: Diane Kruger noted: ‘Rest in peace Christopher Plummer. Grateful to have known you #nationaltreasure’

‘He was a National Treasure who deeply relished his Canadian roots. Through his art and humanity, he touched all of our hearts and his legendary life will endure for all generations to come.’

The star passed away peacefully at his home in Connecticut with his wife Elaine Taylor at his side, Deadline Hollywood said.

Plummer, an accomplished Shakespearean actor honored for his varied stage, television and film work in a career that spanned more than six decades, was best known for his role in ‘The Sound Of Music,’ which at the time eclipsed ‘Gone With the Wind’ (1939) as the top-earning movie ever.

He flourished in a succession of meaty roles after age 70 – a time in life when most actors merely fade away. He claimed a long-awaited Academy Award at age 82 for his supporting performance in ‘Beginners’ as an elderly man who comes out of the closet as gay after his wife’s death. 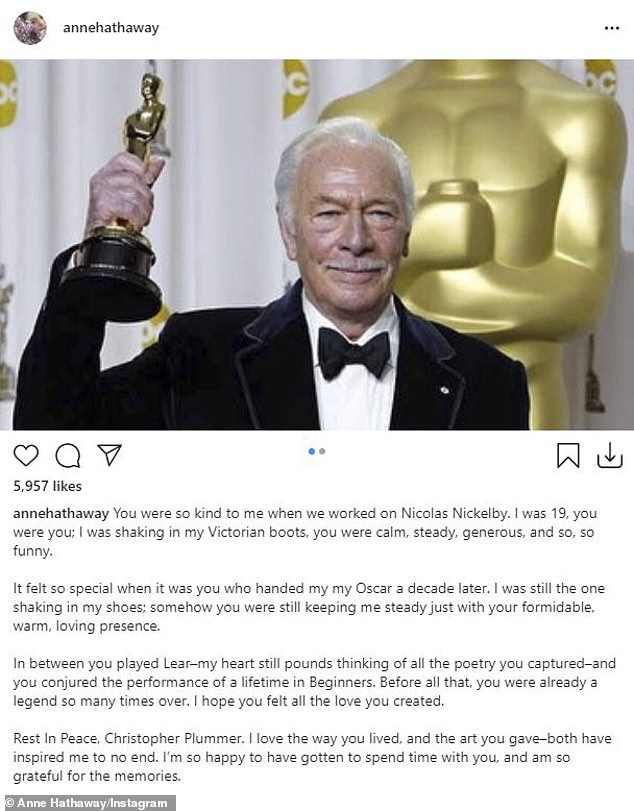 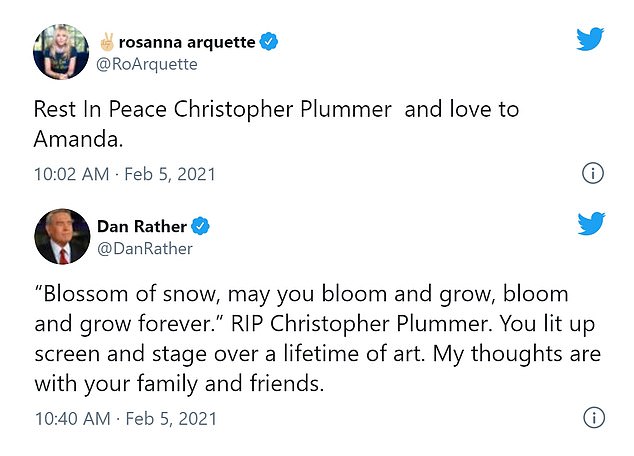 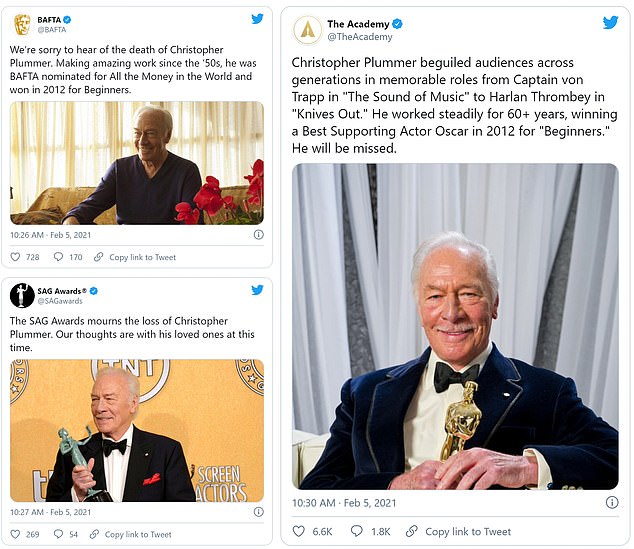 So much love shared: BAFTA, The Academy and the SAG Awards all shared statements 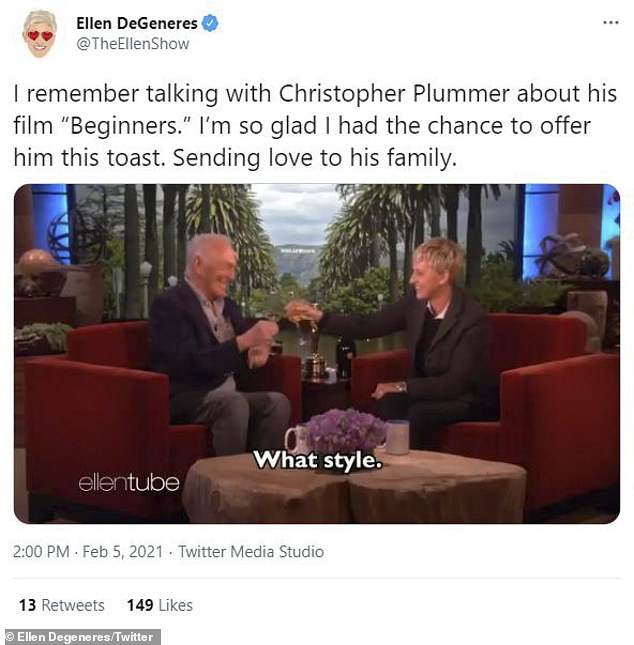 The artist became the oldest actor to win a competitive Academy Award – supplanting Jessica Tandy and George Burns, who both were 80 when they won theirs.

Plummer appeared in more than 100 films and also was nominated for an Oscar for his portrayal of Russian author Leo Tolstoy in 2009’s ‘The Last Station.’ He won two Tony Awards for his Broadway work, two Emmy Awards for TV work and performed for some of the world’s top theater companies.

But for many fans his career was defined by his performance as an stern widower in ‘The Sound Of Music’ – a role he called ‘a cardboard figure, humorless and one-dimensional.’ In his 2008 autobiography ‘In Spite Of Myself,’ Plummer refers to the movie with the mischievous acronym ‘S&M.’ 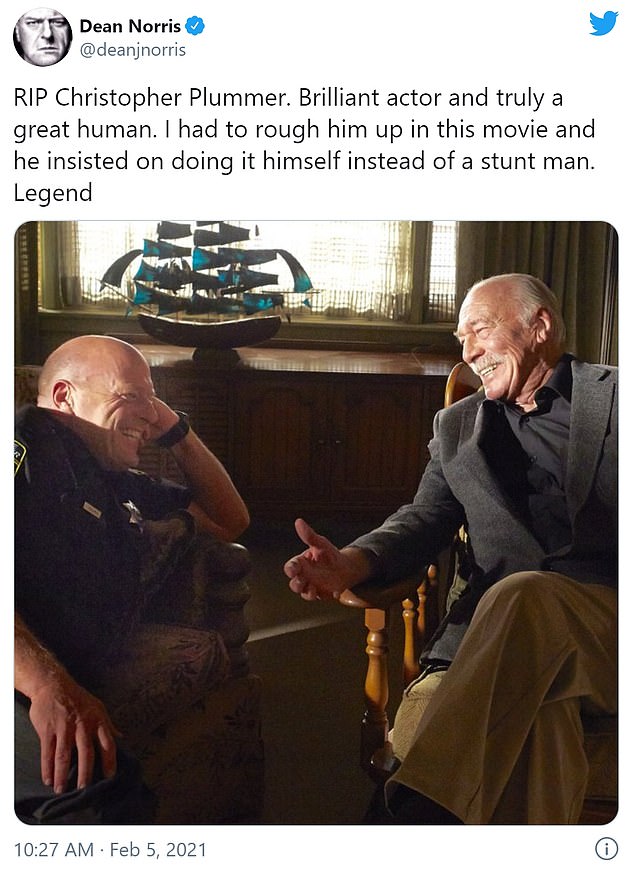 They got along well: Dean Norris said that Plummer was a ‘brilliant actor’ 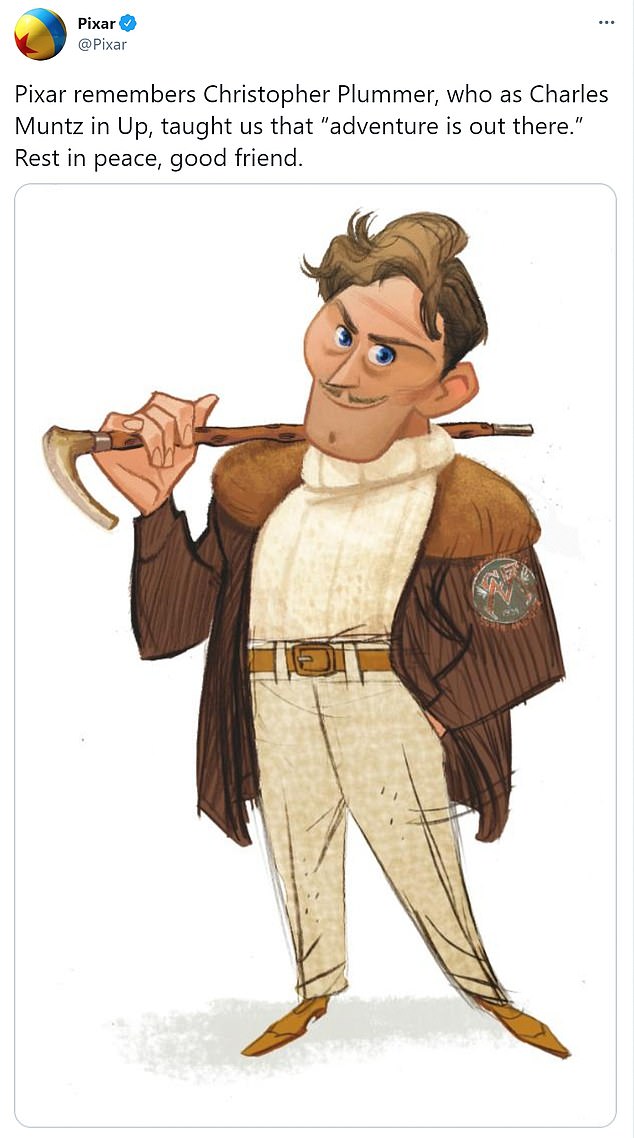 A fun share for fans: Pixar posted a cartoon image of the acting icon from Up

It took him four decades to change his view of the film and embrace it as a ‘terrific movie’ that made him proud.

Director Robert Wise’s wholesome, sentimental film follows the singing von Trapp family and their 1938 escape from the Nazis. Plummer’s character falls in love with Andrews, portraying a woman hired to care for his seven children. The movie won the Academy Award as best picture of 1965.

‘Originally I had accepted Robert Wise’s offer simply because I wanted to find out what it was like to be in a musical comedy,’ Plummer wrote in his book. ‘I had a secret plan to one day turn ‘Cyrano de Bergerac’ into a Broadway musical. ‘S&amp;M’ would therefore be a perfect workout in preparation for such an event.’

He said he had never sung before in my life – ‘not even in the shower’ – before taking a role that included crooning the song ‘Edelweiss.’ He blamed his own ‘vulgar streak’ for the desire to star in a big, splashy Hollywood extravaganza. 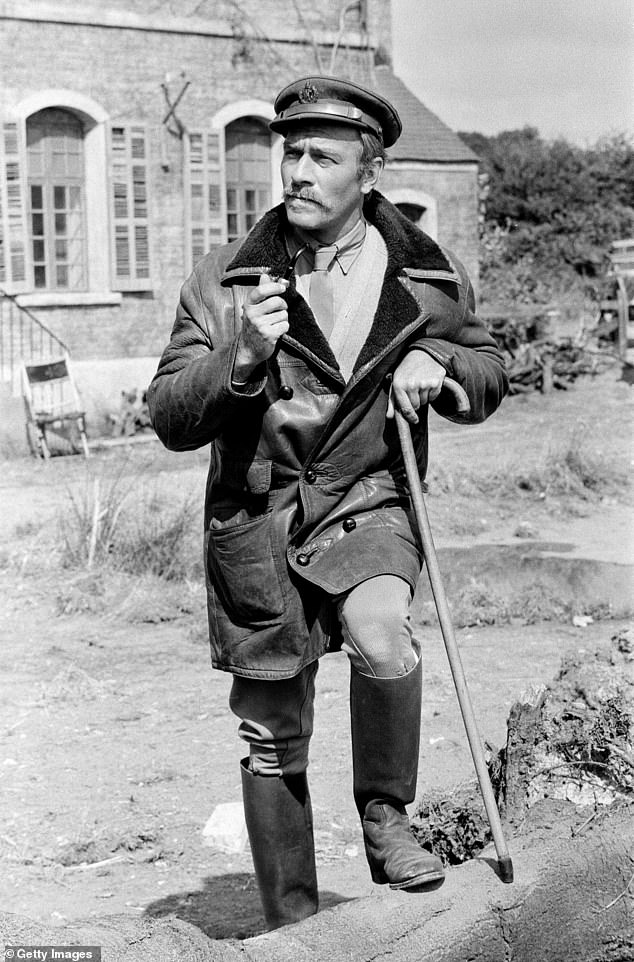 Bold: In the film Aces High, the story of the Royal Flying Corps, in 1975

‘And yes, all right, I’ll admit it, I was also a pampered, arrogant, young bastard, spoiled by too many great theater roles,’ he wrote. ‘Ludicrous though it may seem, I still harbored the old-fashioned stage actor’s snobbism toward moviemaking.’

That was followed by triumphs in director Ron Howard’s Academy Award best picture winner ‘A Beautiful Mind’ (2001), director Spike Lee’s ‘Inside Man’ (2006), ‘Up’ and ‘The Imaginarium of Doctor Parnassus’ (both 2009) and ‘Barrymore’ and ‘The Girl with the Dragon Tattoo’ (both 2011).

Plummer was born in Toronto on Dec. 13, 1929, into a privileged railroad family. He was the great-grandson of Sir John Abbott, the third prime minister of Canada. 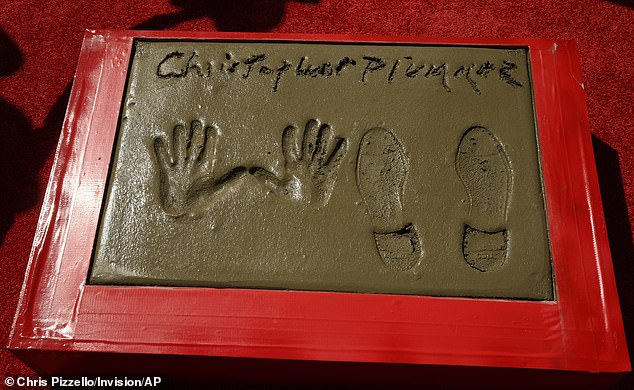 In cement: The hand and footprints of actor Plummer are seen following a ceremony for him outside the TCL Chinese Theatre IMAX in 2015

Christopher confessed to a boozy lifestyle with plenty of affairs through the 1960s. He said his third wife, British actress Elaine Taylor, forced him after their 1970 marriage to stop the carousing that consumed some of his peers and friends, such as Richard Burton and Peter O’Toole.

‘Yeah, I stopped,’ he told Britain’s Telegraph newspaper in 2010. ‘Square son of a bitch that I was, coward that I was! No, Elaine did say, ‘If you don’t quit this stupid over-drinking I’m outta here.’ And thank God. She did in a sense save my life.’

Plummer’s early films included 1965’s ‘Inside Daisy Clover’ with Natalie Wood and Robert Redford, released the same year as ‘The Sound Of Music,’ ‘The Fall of the Roman Empire’ (1964) with Sophia Loren and Alec Guinness, and ‘Triple Cross’ (1966).

Among his more colorful roles were as an eye-patch-wearing Klingon in ‘Star Trek VI: The Undiscovered Country’ (1991) and as an urbane jewel thief in ‘The Return of the Pink Panther’ (1975). He said he kicked himself for turning down the Gandalf role in the popular ‘The Lord of the Rings’ trilogy.

One of his last major roles was as another patriarch, in the dark-comedy ‘Knives Out’ in 2019.

His TV roles included the 1983 mini-series ‘The Thorn Birds.’

Plummer lived with Elaine in Connecticut. He was the father of Tony Award-winning actress Amanda Plummer.