Coleen Rooney was showing off her incredibly bronzed post-baby figure in a sexy peach camouflage bikini on Saturday, as she enjoyed a luxury boat ride with her brood in Barbados.

The mother-of-four was seen heading the luxury vessel in a pretty sundress before stripping off to reveal the stylish two-piece.

Coleen has been enjoying her fourth holiday of the year with her sons in the beautiful Barbados sunshine, while husband Wayne fulfils his football commitments in the States.

Jaw-dropping: Coleen Rooney was showing off her incredibly bronzed post-baby figure in a sexy peach camouflage bikini on Saturday, as she enjoyed a luxury boat ride with her brood in Barbados

Coleen had her bronzed physique on display in the stylish white dress with a blue printed trim, shielding her eyes with the oversized aviator sunglasses, before taking it off to unveil the bikini.

The stunning beauty pulled her brunette tresses into a classic braid while carrying all the essentials in a large white tote bag, but later kept it out of the way in a simple up-do.

As she and her sons boarded the boat Coleen made sure two-year-old Kit was happily perched on her lap.

Amazing: Coleen had her bronzed physique on display in a pretty white sundress before ditching it to reveal the peach two-piece underneath after arriving on the boat 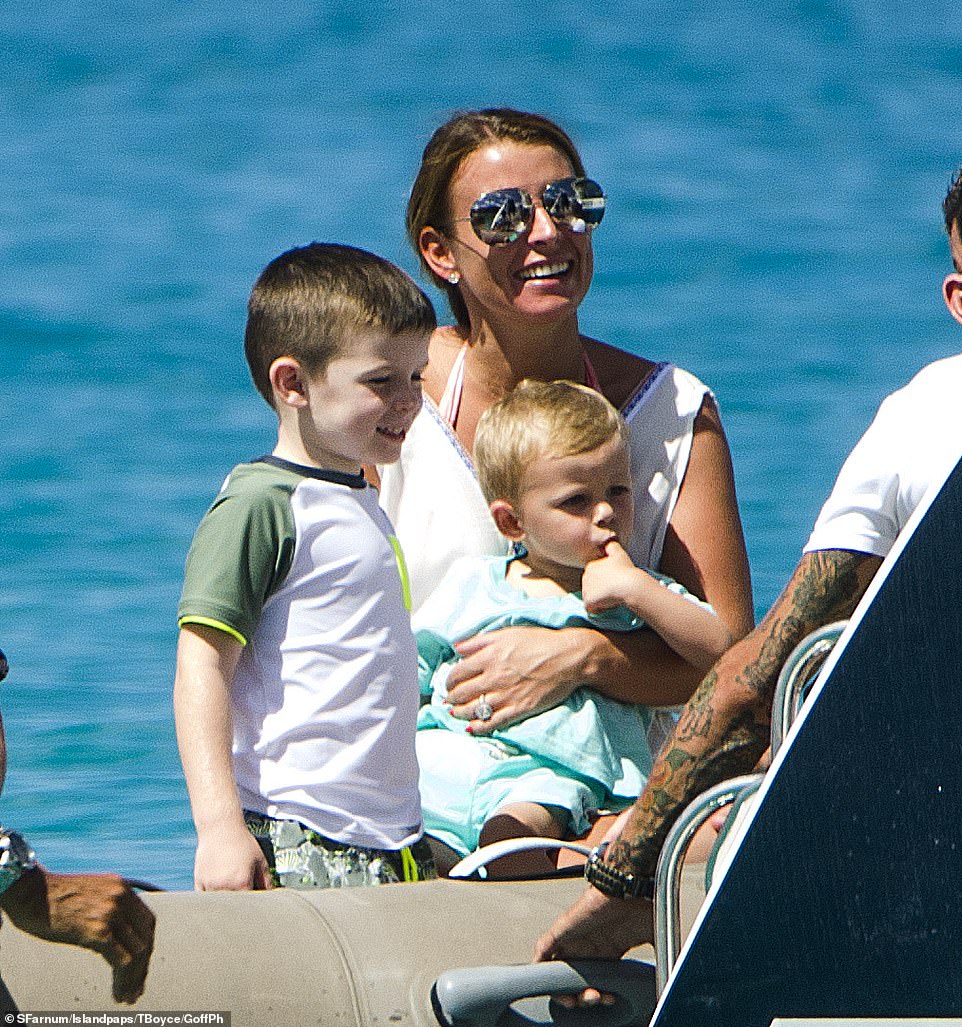 Loving it: She was perfectly dressed for the Barbados sunshine as the Rooneys headed to the stunning vessel on their sun-soaked getaway 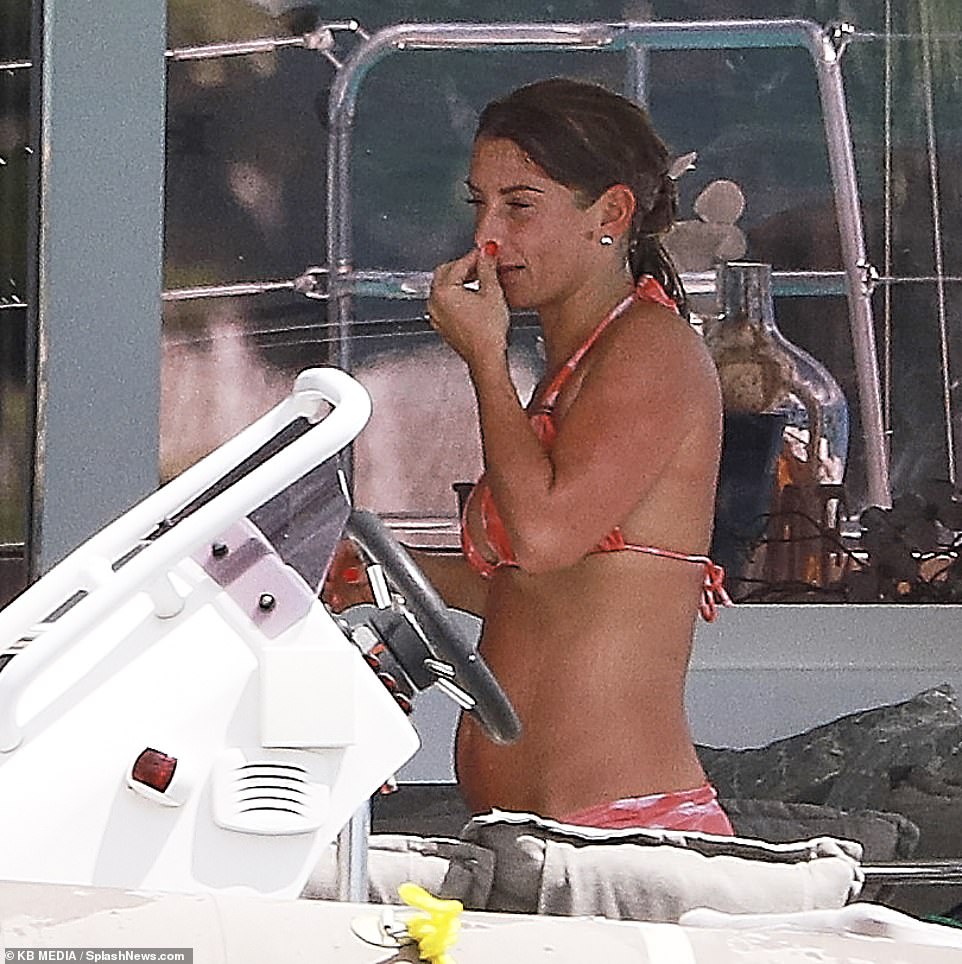 Relaxed: She had her brunette tresses pulled back into a simple updo, finishing off her summer ensemble with classic gem earrings 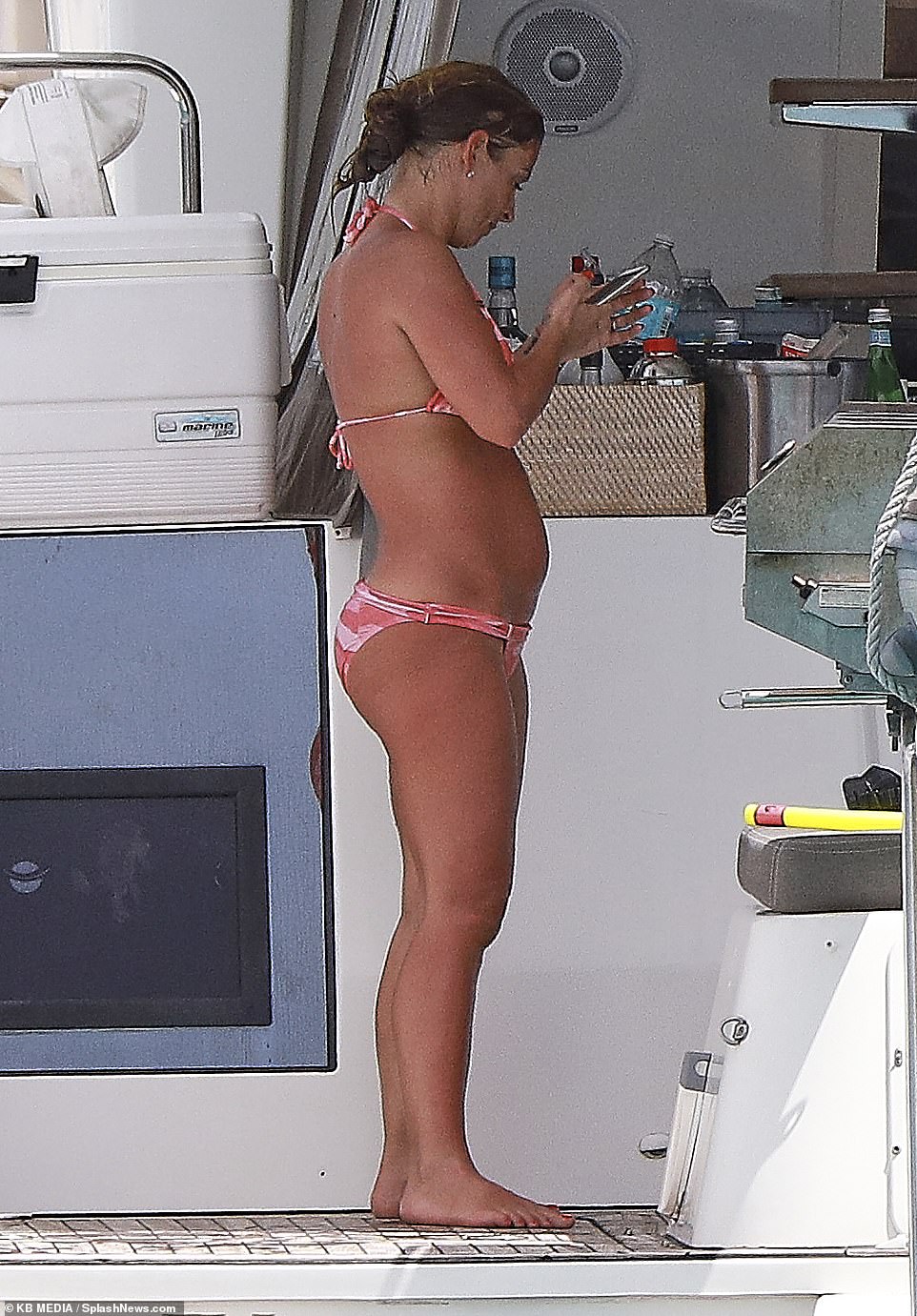 Proud: The family break comes as Coleen’s husband Wayne continues to fulfull his Stateside football commitments, as one of the star players for DC United 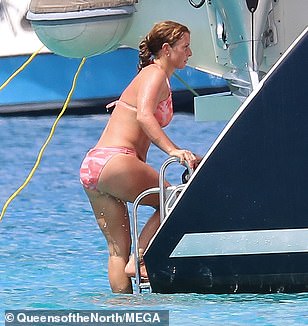 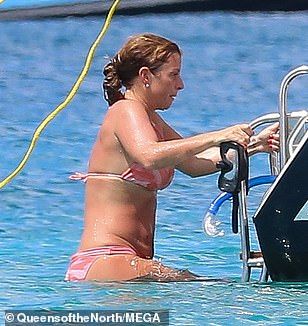 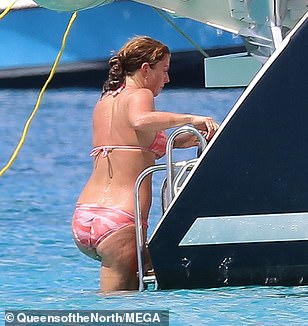 A bit chilly: After boarding the docked vessel, Coleen was seen plunging into the beautiful blue ocean as she took a cooling dip 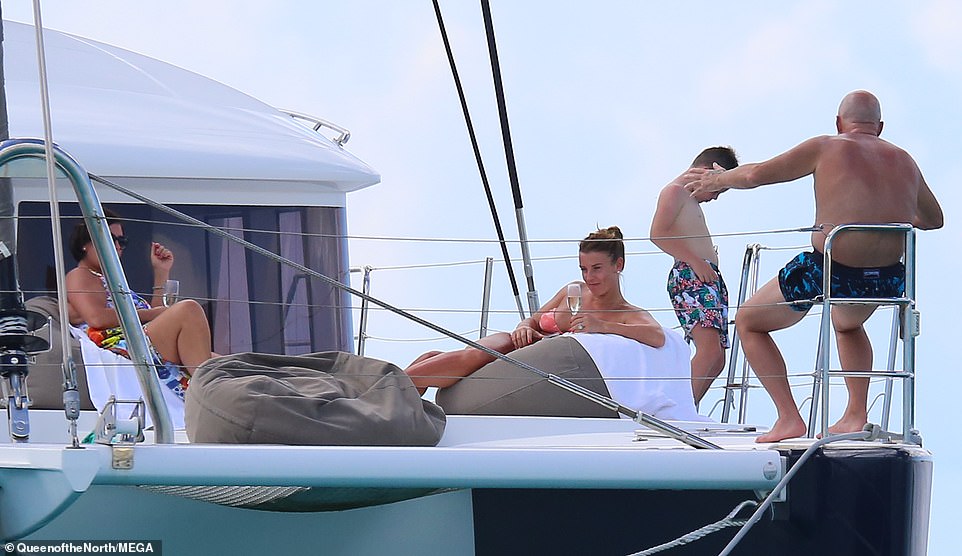 Lap of luxury: While her children messed about on the boat, Coleen took a breather to sip some champagne

Their trip to Barbados is Coleen’s fourth holiday this year. She enjoyed a break on the Caribbean island in May, before heading to Disneyland Paris in June and Portugal in July.

She took to Instagram with a sweet snap of the married couple to mark the occasion – just a couple of days after praising her beau and his team for their impressive performance on the pitch of late. 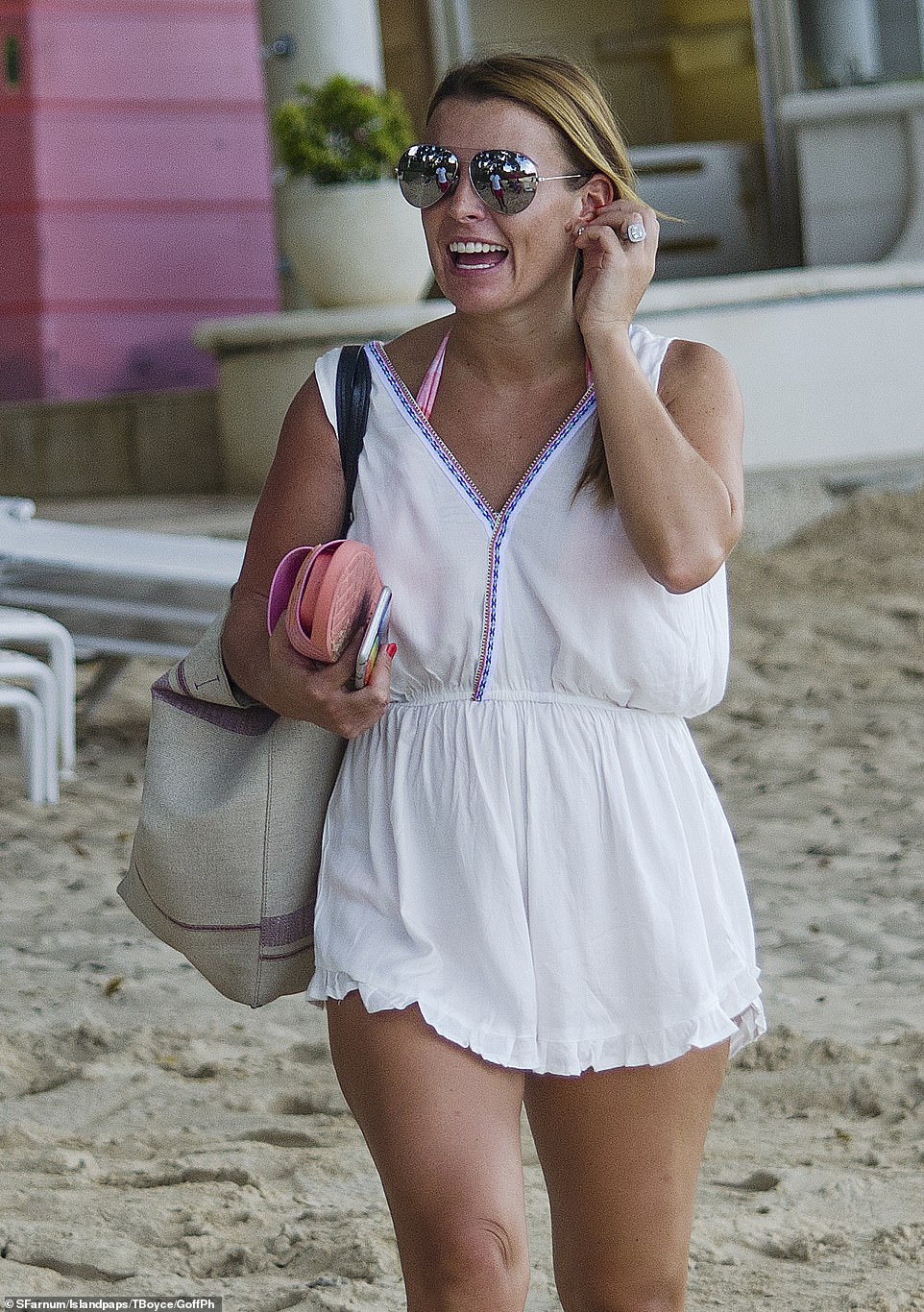 Beautiful: The mother-of-four has been showing off her incredible post-baby body on the break just eight months after welcoming son Cass 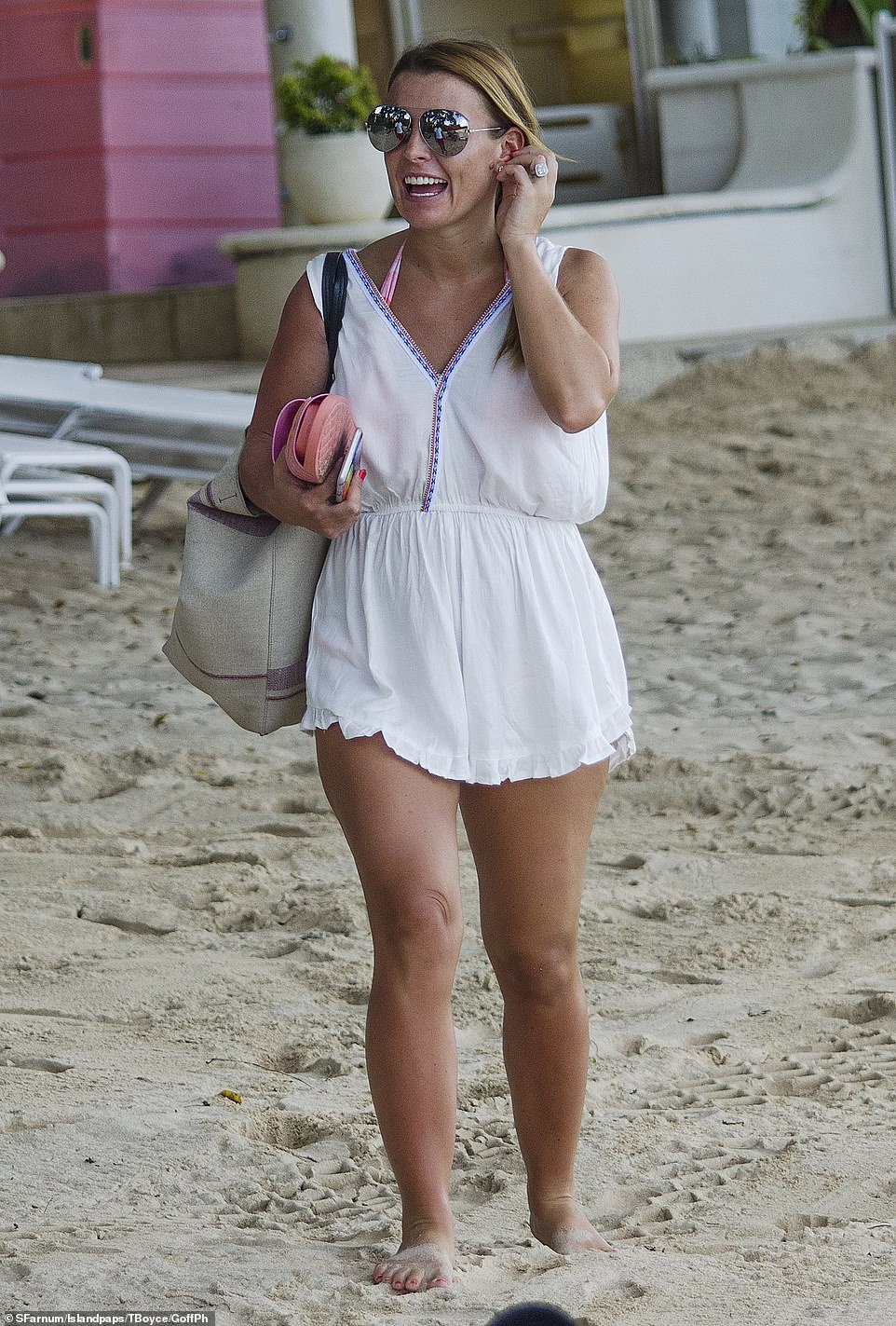 Amazing: Coleen pulled her brunette tresses into a simple side-braid to keep cool in the blazing hot weather, rocking a pretty white sundress as she headed to the boat earlier in the day 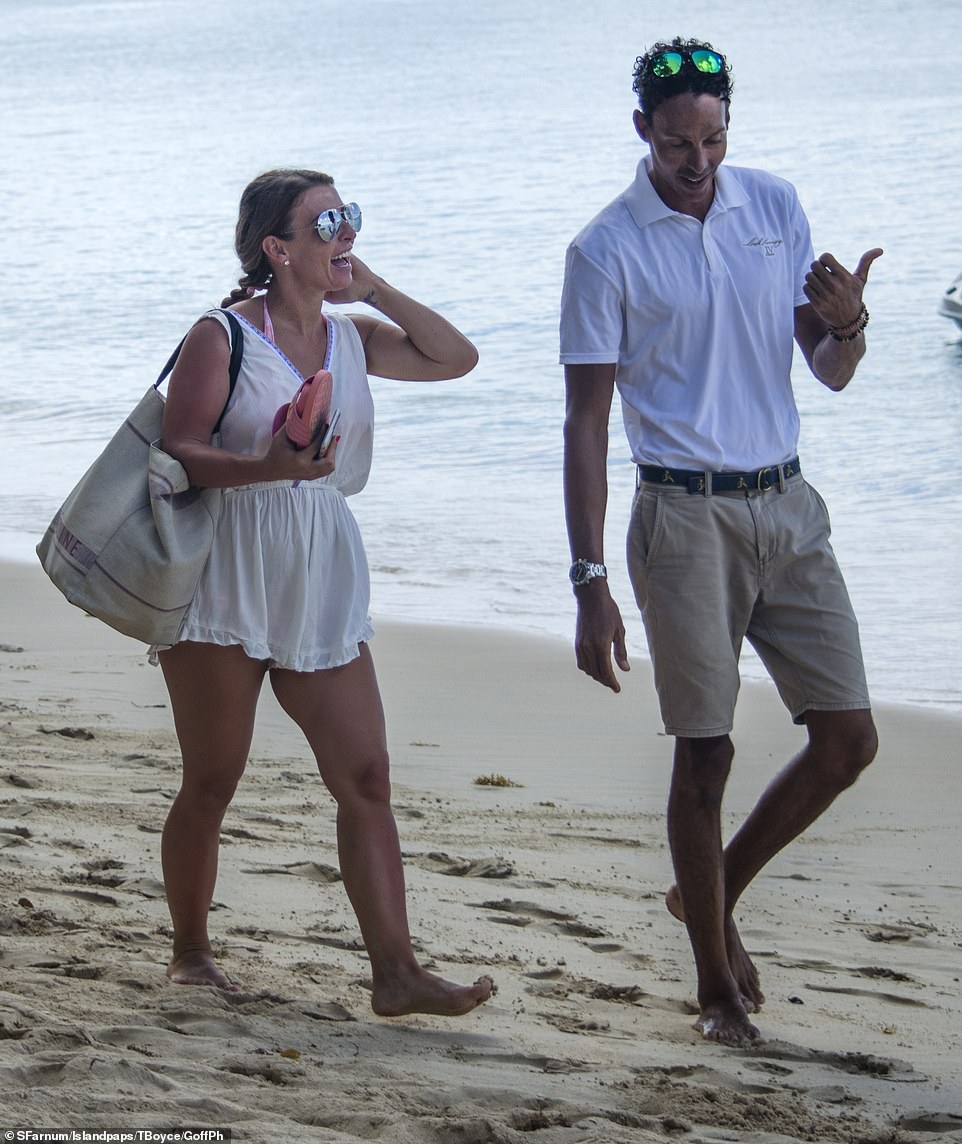 Jovial: Chatting to the boat’s owner Coleen seemed excited to be heading out to sea for the excursion 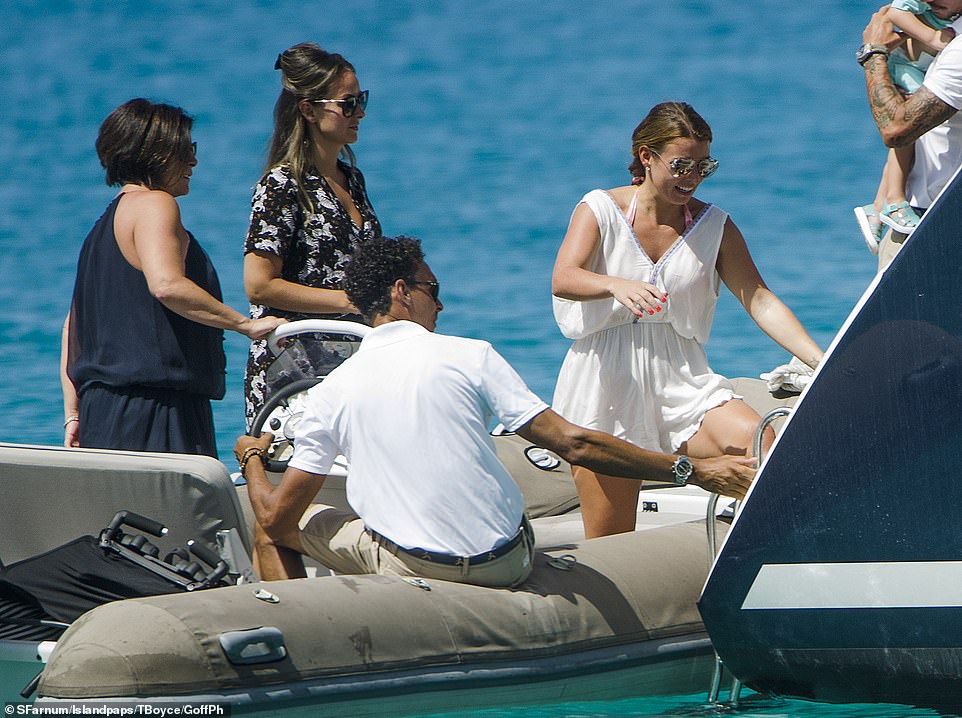 Time for a trip: The star was seen boarding a boat with her family for the excursion, looking amazing in the pretty white frock 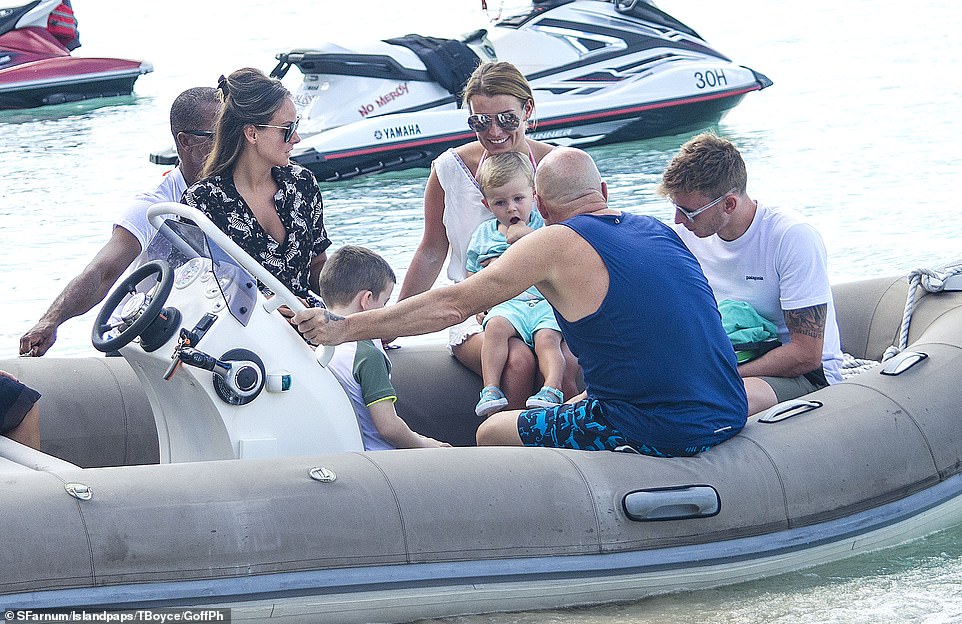 Best time: Their trip to Barbados is Coleen’s fourth holiday this year. She enjoyed a break on the Caribbean island in May, before heading to Disneyland Paris in June and Portugal in July 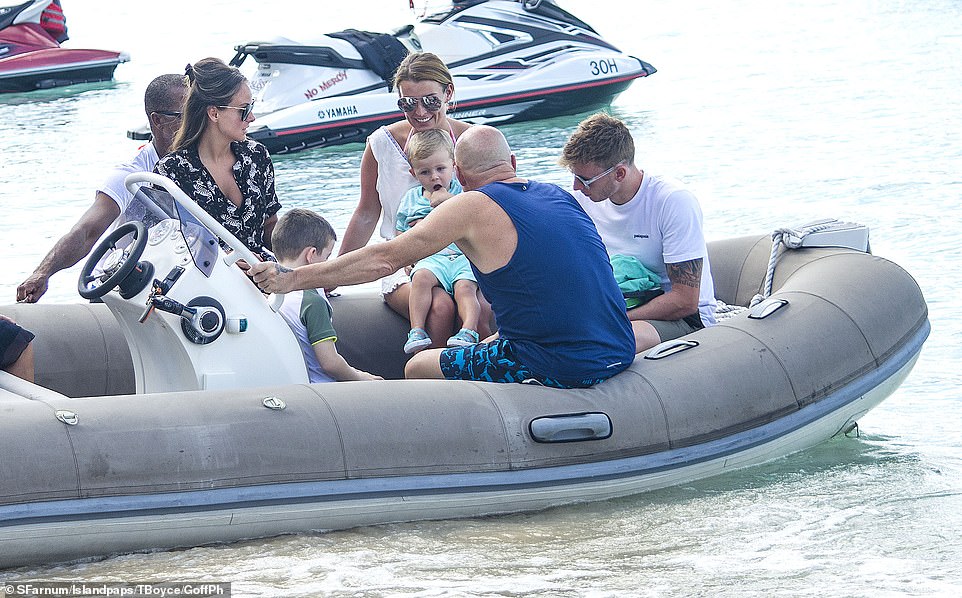 Safety first! Her two-year-old son Kit was happily perched on her lap for the day out, as the family enjoyed the stunning sunshine

Loving it: Coleen was seen boarding a boat with her family as they prepared for a trip around the picturesque island

Coleen simply penned alongside her post: ‘Happy Birthday @waynerooney,’ adding a love heart emoji and another blowing a kiss.

The sweet upload comes after she praised Wayne and his teammates for reaching the playoffs. She shared an adorable photo of the couple’s two sons Klay and Kit decked out in the D.C. United kit, watching on from the stands.

The mother-of-four wrote: ‘Well done Daddy!! Bottom of the table when @waynerooney arrived and now @dcunited have made the playoffs. Great team effort!’ 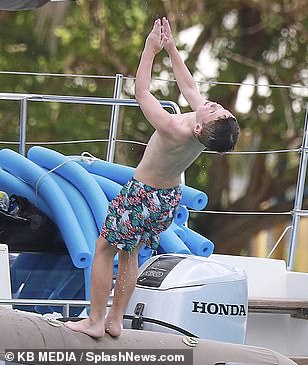 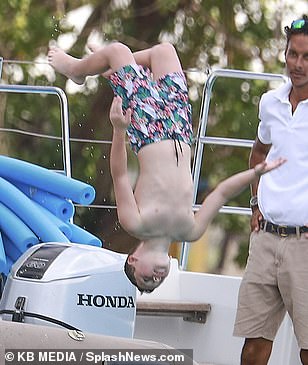 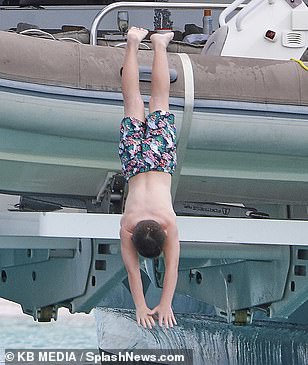 Geronimo! Sporting printed shorts Kai took an extremely bold leap into the water from the edge of the small boat that took them to the waiting yacht 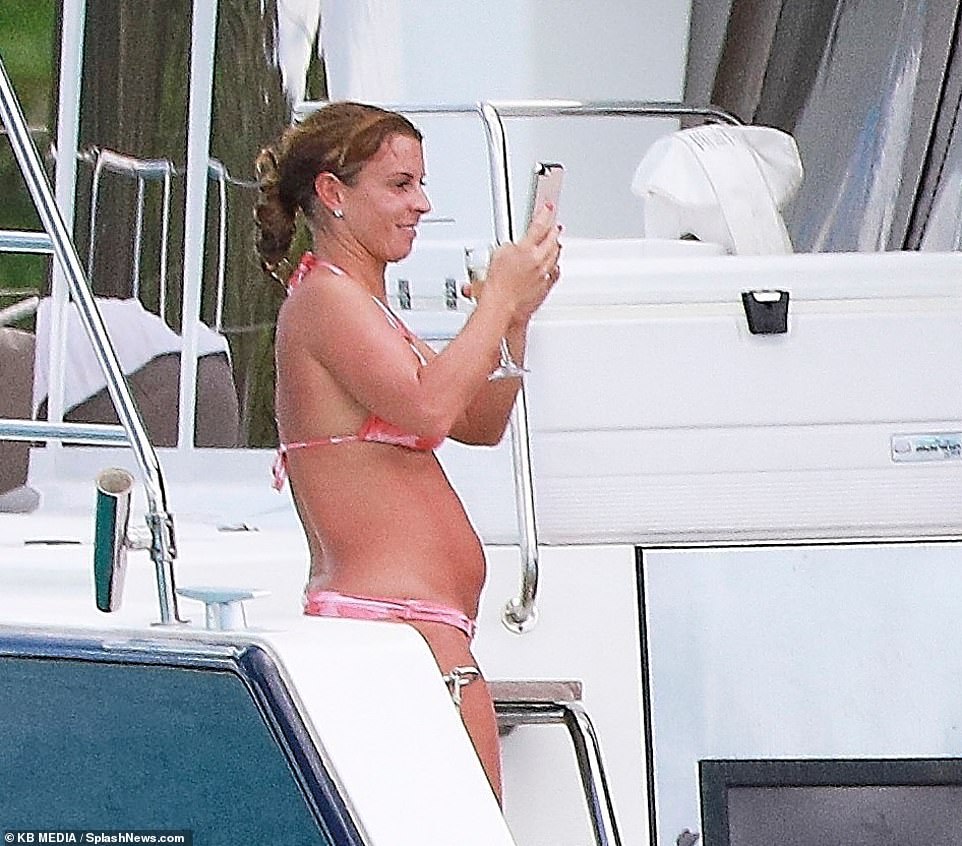 Smile! Ever the proud mum Coleen was seen grabbing some snaps of her family jumping into the water 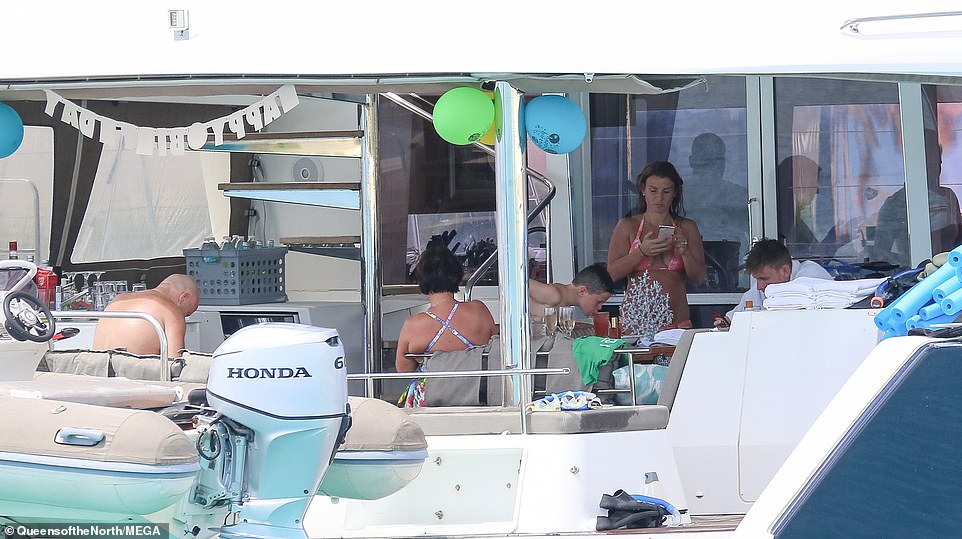 Celebration: The birthday banners indicate that perhaps the boat trip was an early treat for Kai, just under a week before his ninth birthday 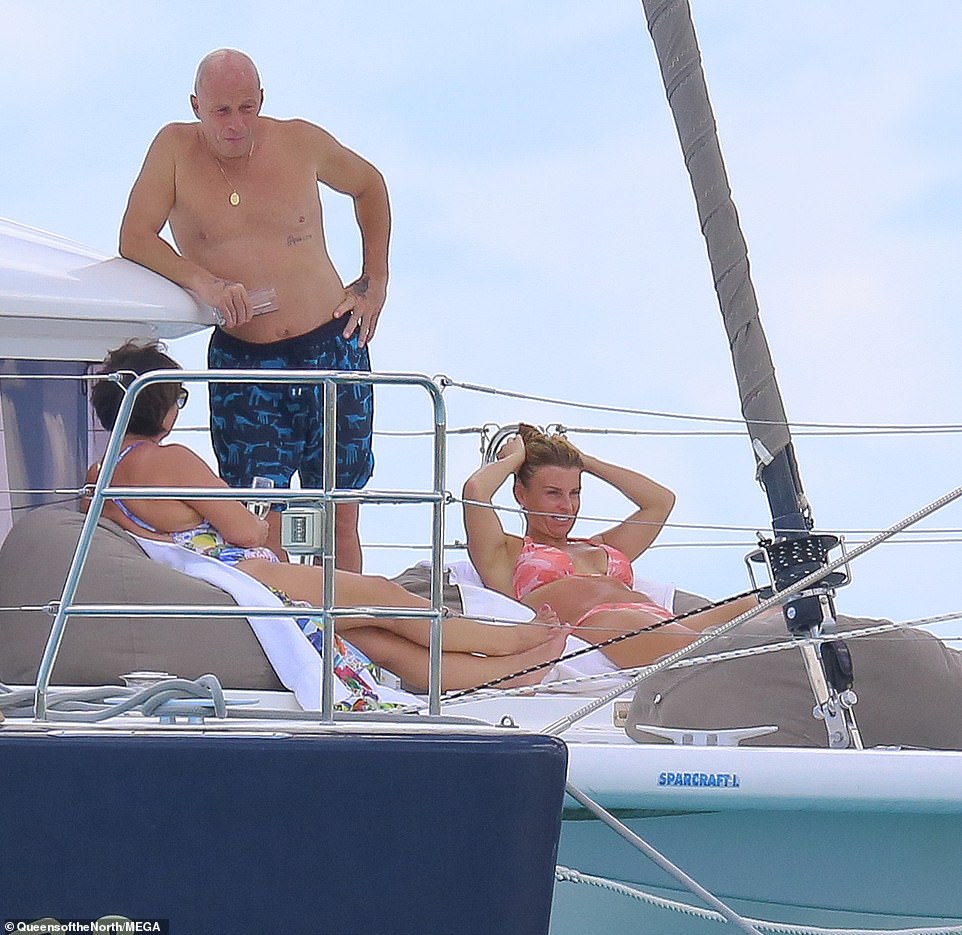 Low-key: The star seemed to be enjoying the break on the boat with her family

Coleen confirmed her family’s move Stateside in July and fans have since seen the Rooney clan touch down across the pond and settle into their new home.

Proud mum Coleen revealed her sons – Kai, eight, Klay and Kit – have started school overseas and she shared a sweet family selfie from inside their new pad.

Wayne and Coleen are seen cuddled up to their brood, with Coleen holding onto the couple’s youngest son Cass in her arms. She simply wrote ‘Everything’ alongside her photo. 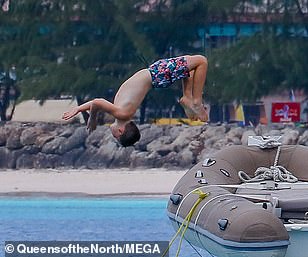 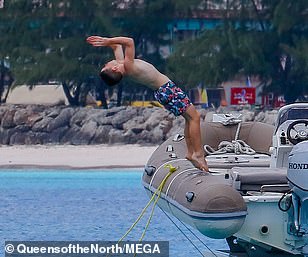 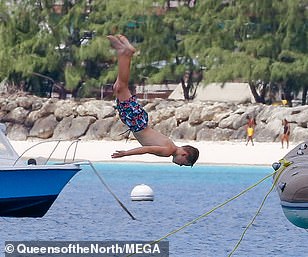 Daring: On the outing Coleen’s oldest son Kai was showing off his back flip skills as he plunged from the edge of the boat into the water 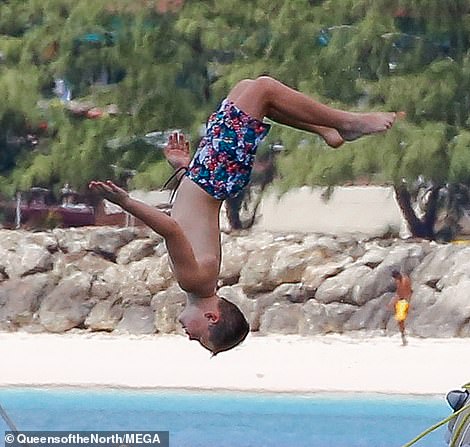 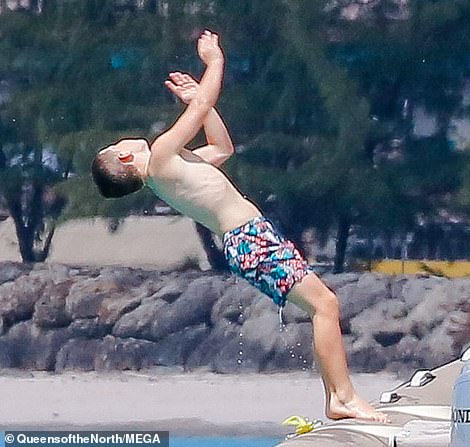 Jump it out: Kai hasn’t held back from showing off his back flip skills as he hurled into the water 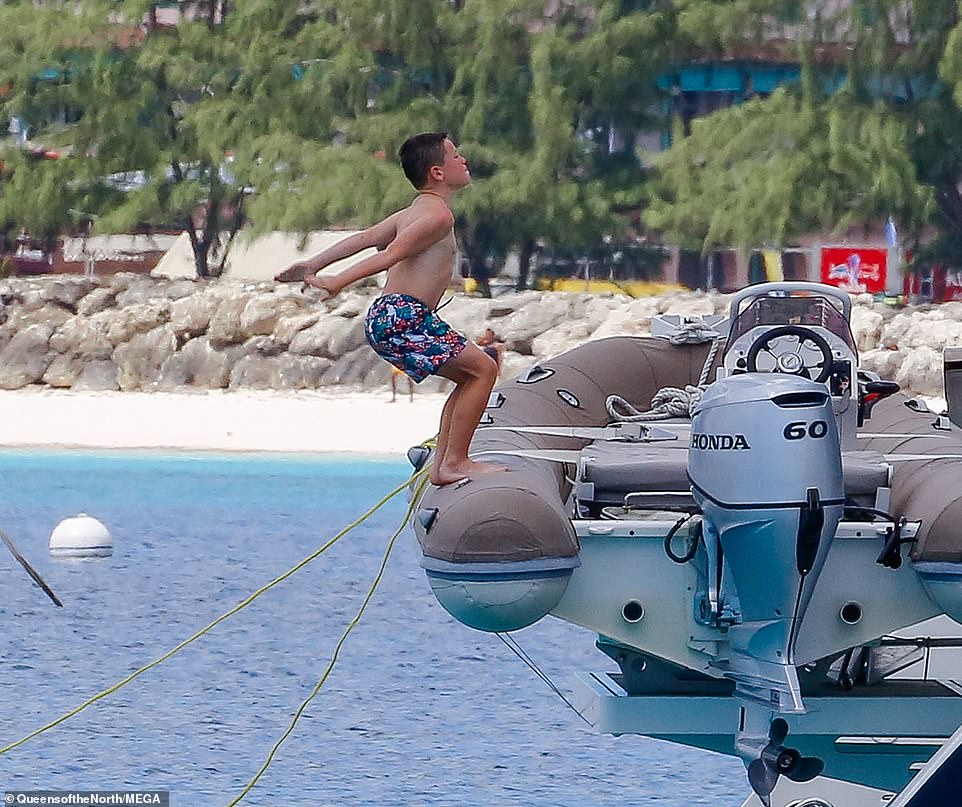 Jovial: Making some waves: Kai has been regularly seen supporting dad Wayne at his football matches, after the family moved Stateside due to his signing for DC United 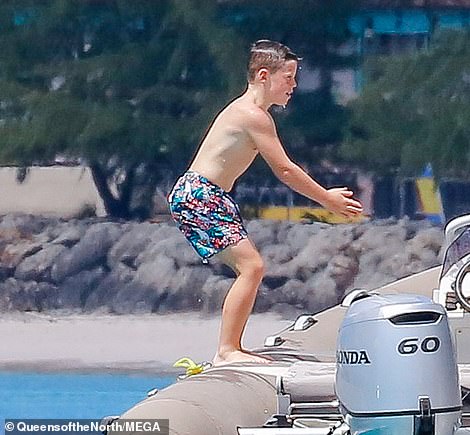 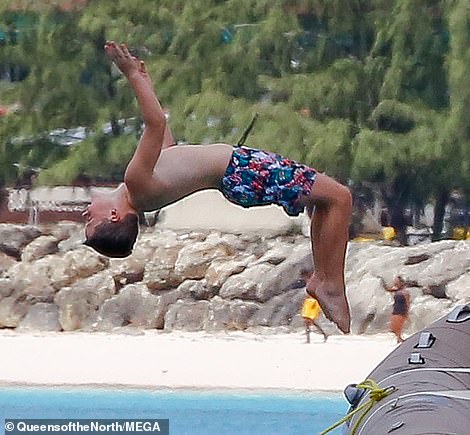 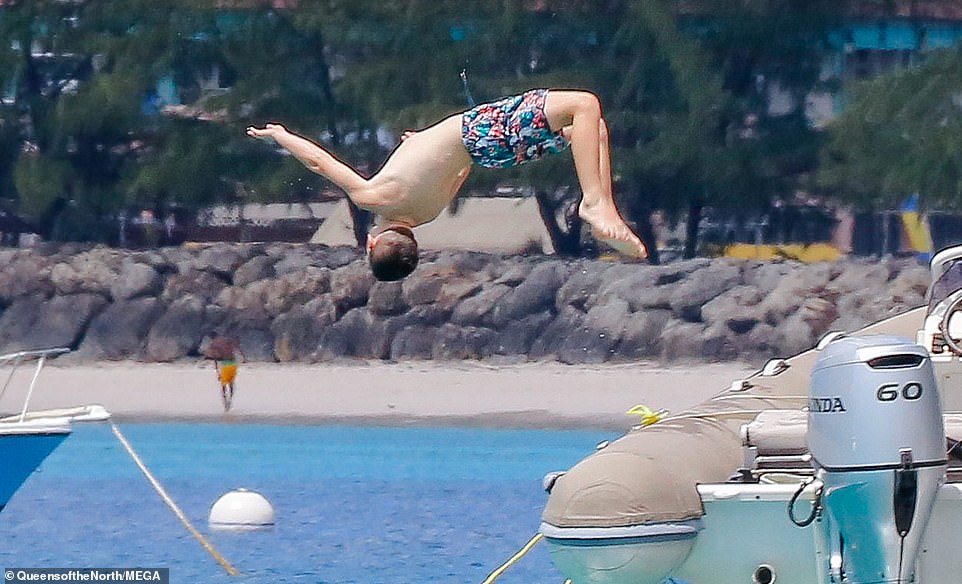 No fear: Kai sported multicoloured swimming shorts as he showed off him jumping skills