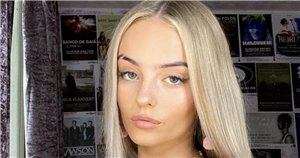 Millie Gibson has finally opened up on why she has a gap in her eyebrow after fans wondered if it was shaved off to suit the nature of her Coronation Street character Kelly Neelan.

The nearly-17 year old has been inundated with questions over the mark across her social media pages and has even had to clarify what it is in her Instagram bio, which reads: "actress, currently in @coronationstreet … and before you ask – it’s a scar".

Now, the star has revealed exactly what caused the scar to begin with in order to put the questions to rest once and for all.

"It is a scar! My dad gets annoyed with online comments like that!" she explained. "When I was two or three, I have pictures looking like a thug.

"I whacked my head off a corner on the bannister and my head just went massive. It never really healed, I kind of like it. It works with the character!" she told Metro.co.uk.

Millie said she gets a lot of fan messages due to her Corrie character Kelly's actions, especially since the murder of Seb Franklin.

She explained: "It’s been half and half. Some people struggle to separate fiction and reality but many have been so kind – I hate your guts but you’re a great actress. It was expected so it’s been all right.

"She is tricky to like anyway. Even Toyah is struggling to like her, you need good morals to stick with her. But as it pans out I hope people are more remorseful to her."

Despite the difficult nature of her character, Milli said she loves portraying her as she continued: "It’s so much more challenging in a good way to play a boisterous hard faced character.

"I am not as confident as Kelly – the way she speaks to people, it can be fun. She always gets in the wrong place at the wrong time."

Speaking on Kelly's future in the Cobbles, Millie went on to explain that she'll either "turn her life around" or be the "mouthy blonde" on the show.

The actress added: "Part of me loves her despite what she gets involved in but I do see her sticking around. I am so over the moon and grateful.

"I thought it was just a once in a blue moon experience but now I am part of this amazing family.

"She has all of these underlying layers which are just amazing to explore."