The 72-year-old actress told The Daily Star she doesn’t want to see her character on-screen as she feels there ‘isn’t much comedy’ in it, despite her vitriolic one-liners.

Maureen’s revelation came after fans praised her ‘hilarious’ Corrie debut as Tyrone Dobbs’ long-lost grandmother, with others comparing her to the acid-tongued soap legend Blanche Hunt. 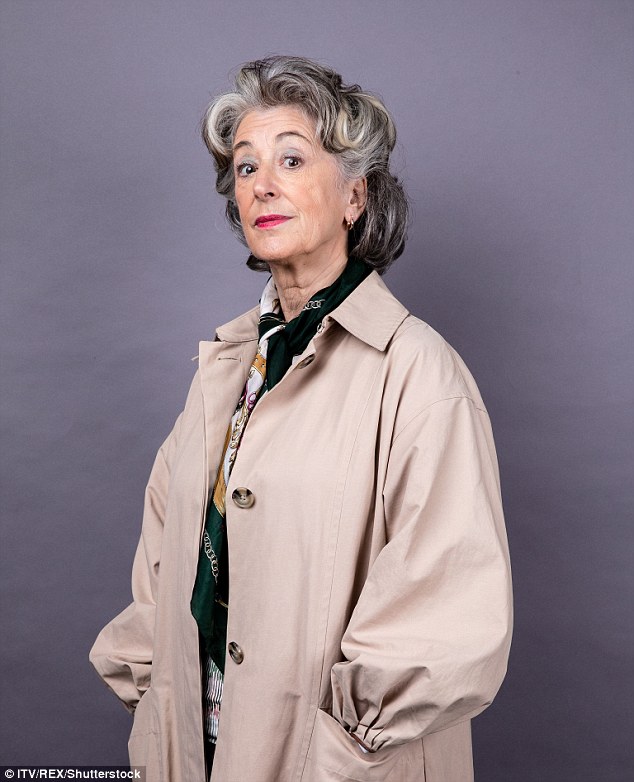 She said: ‘There isn’t much comedy in the actual storyline by the very nature of what it is.

‘But the lines are dry and in a way you have to put your own personality into it, and the writers start to respond to the way it is going so I can only wait and see.’

Maureen also explained that it took the spirit of her late husband Jack Rosenthal – who wrote 129 episodes of the soap in its early days before his 2004 death – to motivate her to take the role and move to Manchester for filming.

She added: ‘But the light over my late husband Jack’s picture sometimes comes on for no reason and whilst I was sitting there wondering what to do, of course on it came.’ Open: Speaking to the Daily Star Maureen admitted there ‘isn’t much comedy’ in Evelyn’s story lines, despite the light-hearted tone of her character 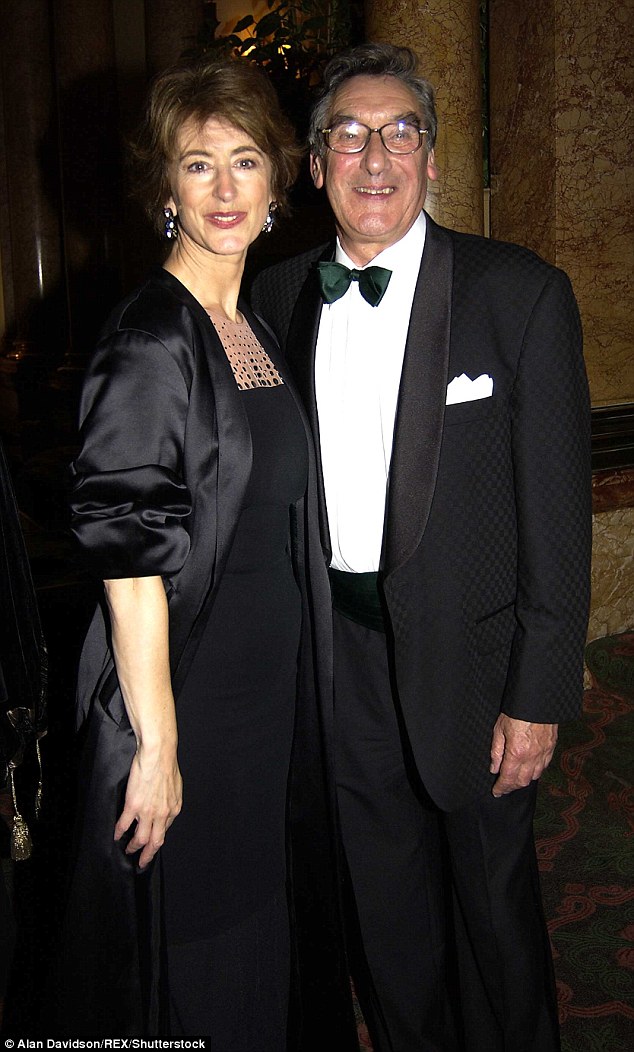 Honest: She went onto explain that the spirit of her late husband John Rosenthal – who passed away in 2004 – motivated her to take the role and move to Manchester for filming

Fans got to see Maureen’s Coronation Street debut on Wednesday night as battleaxe Evelyn, who is visited by Tyrone and his partner Fiz who believe her to be his long-lost grandmother.

Taking to Twitter in droves viewers praised her performance as a welcome comedy character, with others immediately comparing her to vitriolic Corrie legend Blanche.

Evelyn’s first scene saw her provide a less-than friendly greeting to Tyrone and his partner Fiz, denying she could be his grandmother while threatening the pair with a cricket bat.

Eventually Tyrone sees through her act and demands to know the truth about his mother, but this leads to no further truths about his parentage.

From her opening defamation of the pair for trying to rob her, to ushering them out of the door because she had ‘missed Countdown’, Evelyn’s put-downs went down a storm with viewers. 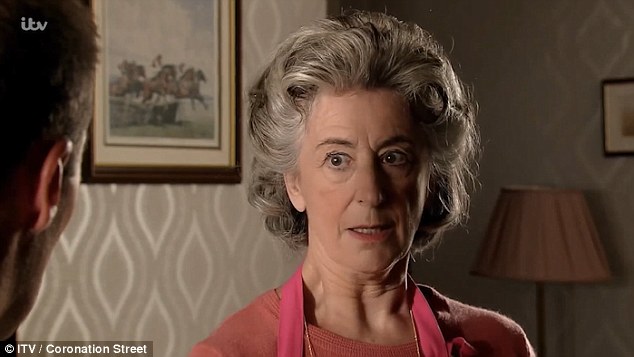 We love her! This came after fans praised Maureen Lipman’s ‘hilarious’ debut as Evelyn,  after she made her first appearance on Wednesday night 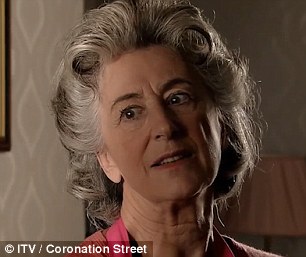 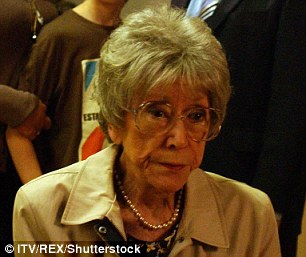 Familiar: Many added that her vitriolic nature reminds them of the acid-tongued Corrie legend Blanche Hunt, who starred on the soap until actress Maggie Jones’ death in 2009 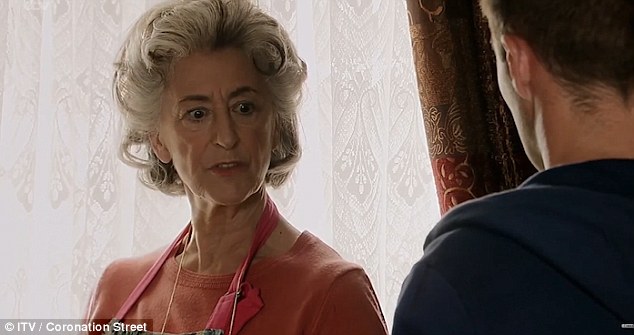 Brutal: Evelyn makes her arrival as Tyrone’s long-lost grandmother, with her immediately denouncing the claims that they are related

Posting their praise on Twitter, many fans were admitted she had reminded them of the former Corrie star Blanche, who was killed off following actress Maggie Jones’ death in 2009.

One tweeted: ‘We needed a newer Blanche and Evelyn could very well fit that bill with her vitriol.’

Another added: ‘OMG Corrie again and Tyrone may [have] just met his grandman. She gonna end up being like a blanche can see that happening.’

A third gushed: ‘On the positive side, Maureen Lipman is rather good as Evelyn/Blanche 2.0’ 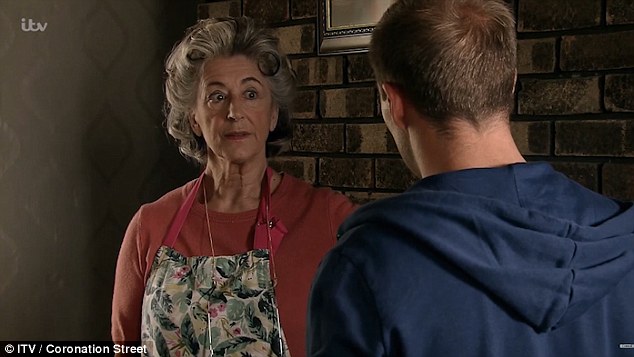 Funny: From her opening defamation of Tyrone for trying to rob her, to sending them packing because she had ‘missed Countdown’, Evelyn’s put-downs went down a storm with viewers 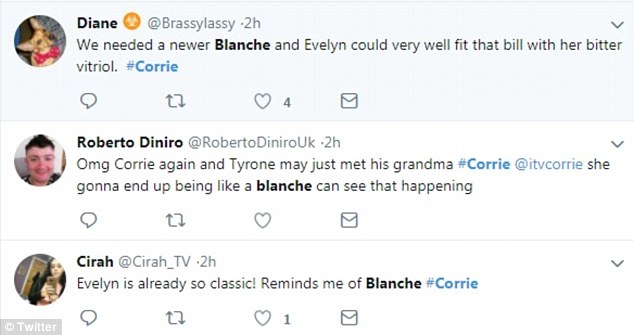 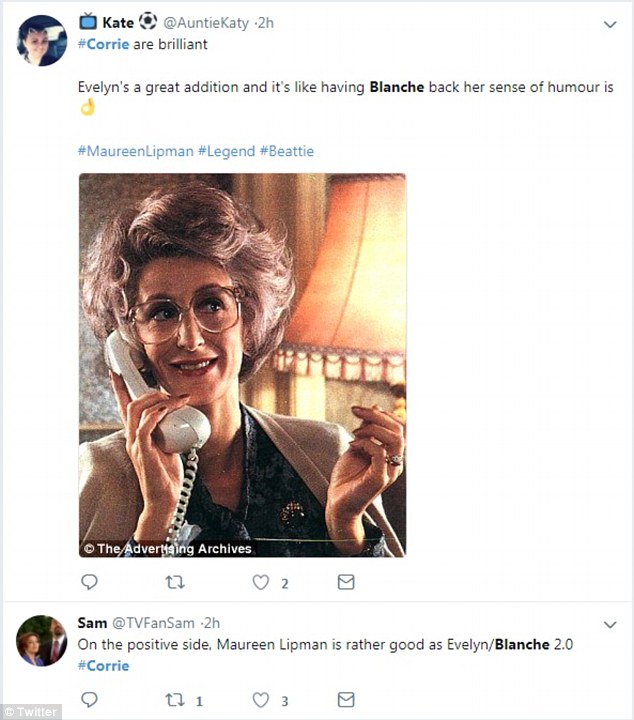 Delighted: Fans rushed to praise Maureen’s performance, with welcoming her character as it reminded them of the late Blanche 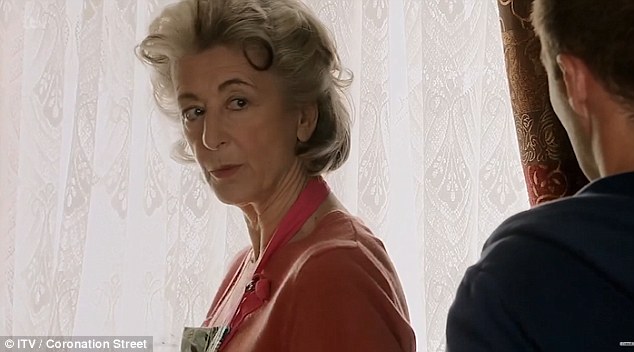 What’s next? Maureen’s character was teased earlier this summer by Corrie bosses, as they hinted she is to bode a nightmare for Street residents

Many other viewers were alos reminded of the famous grandmother Beattie that Maureen played in a series of 1980s adverts for BT (advertised as British Telecom at the time).

The ad were well-known for Beattie’s praising of her grandson’s poor exam results, calling him a scientist because ‘you got an ology!’

Some even noticed a cheeky reference to Maureen’s character in the show, when she complained that she couldn’t stay in touch with her daughter, as ‘the Post Office cut off our phone because of an unpaid bill.’

One joked: ‘Bloody hell Maureen Lipman has actually turned into #Beattie in her old age.’

Another quoted from the ads: ‘Beattie is alive and well…”so you got an ology?’ 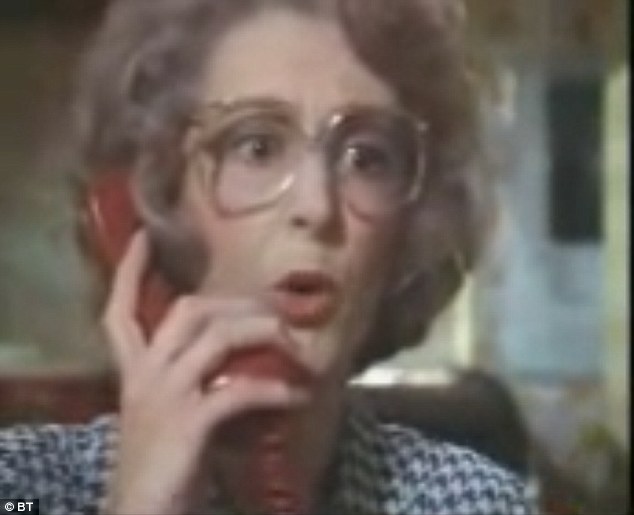 Look who it is! Others also joked that her character threw back to a series of BT adverts Maureen starred in during the 80s, as Beattie who praised her grandson for having an ‘ology’ 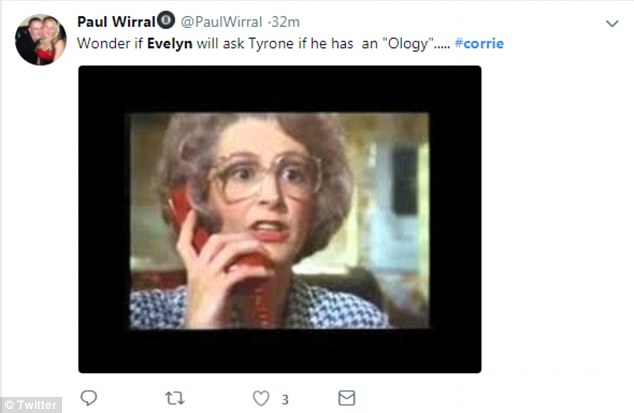 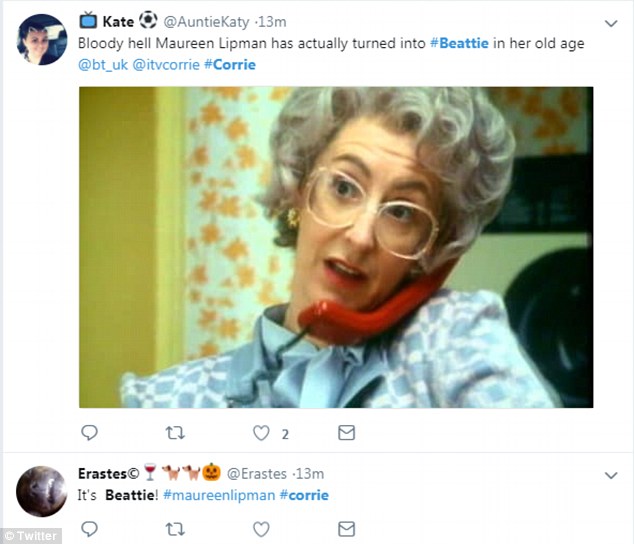 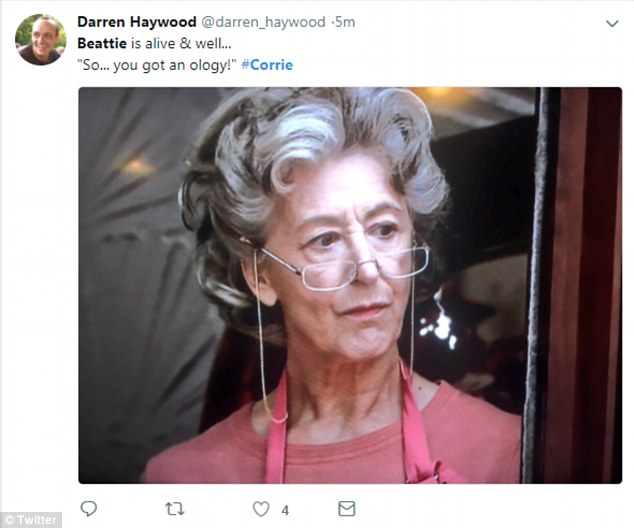 Jokers! Several fans noticed Evelyn had a cheeky reminder of her old advert character, as she complained about her ‘telephone being cut off’

In the coming days despite trying to sever any further relations with Tyrone, Evelyn will move into his house with Fiz and their two children after being threatened with an eviction, and is set to cause havoc for residents of the Street.

Far from an innocent old lady, Evelyn will attempt to rip off Dev in his corner shop, and will annoy Rovers punters after losing a pub quiz by shouting out the wrong answer.

Fans will have to wait and see whether Tyrone will succeed in finding out the truth about his mother, and whether Evelyn will grow to enjoy her time on the Street.

Coronation Street continues on Friday 14th September at 7:30pm and 8:30pm on ITV. 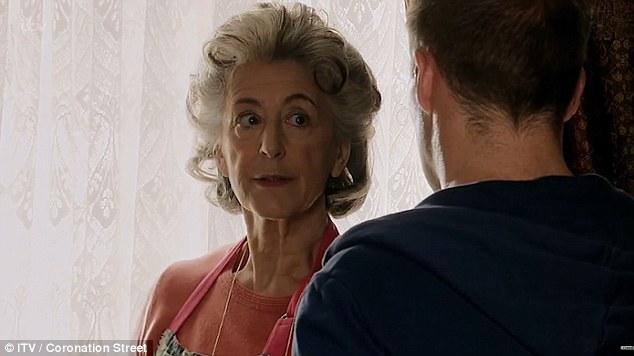 Next? Coronation Street continues on Friday 14th September at 7:30pm and 8:30pm on ITV