Dame Barbara Windsor got a standing ovation from theatre-goers after she sneaked into the Royal Box at the Theatre Royal on Drury Lane on a rare night out.

Barbara, who was diagnosed with Alzheimer’s disease four years ago, joined her husband Scott Mitchell and ex co-star Adam Woodyatt to watch Bonnie Langford in 42nd Street this week.

Scott got emotional when he revealed he captured a glimpse of the ‘old’ Barbara during their ‘wonderful’ night at the theatre. 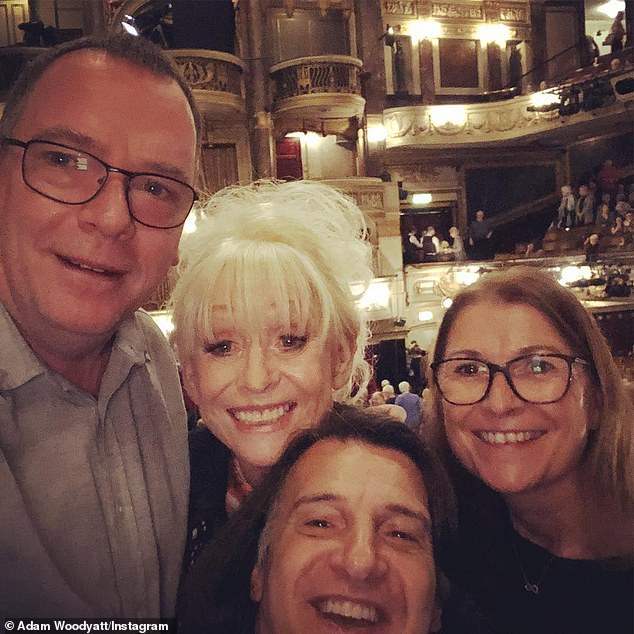 The EastEnders star’s husband also shared his wife was so overjoyed by watching the West End show that she tap danced on the way home.

Scott told The Mirror: ‘It gives her such pleasure chatting to everyone and seeing them all and she never expects that reaction.

‘Then she did an impromptu dance routine on the stage after the show. It’s like two different people once she enters a theatre. The old Babs emerges for a while. It’s wonderful to see those moments.

‘During the interval we sneaked her into Royal Box and the response from the auditorium was so moving. After the show she was even tap dancing. A day I will remember.’ 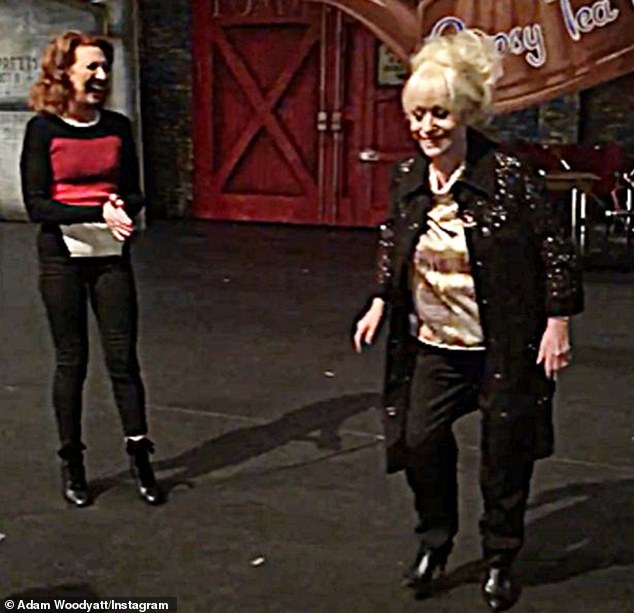 So happy! The EastEnders star’s husband also shared his wife was so overjoyed by watching the West End show that she tap danced on the way home 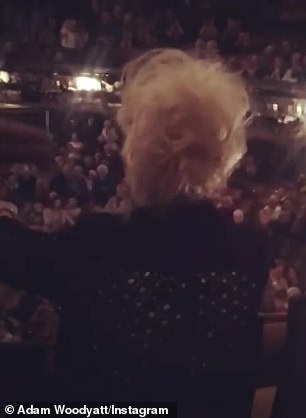 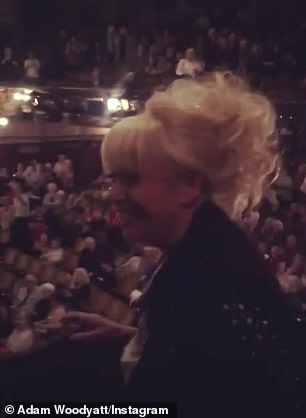 What a treat: Barbara, who was diagnosed with Alzheimer’s disease, joined her husband Scott Mitchell and ex co-star Adam Woodyatt to watch Bonnie Langford in 42nd Street 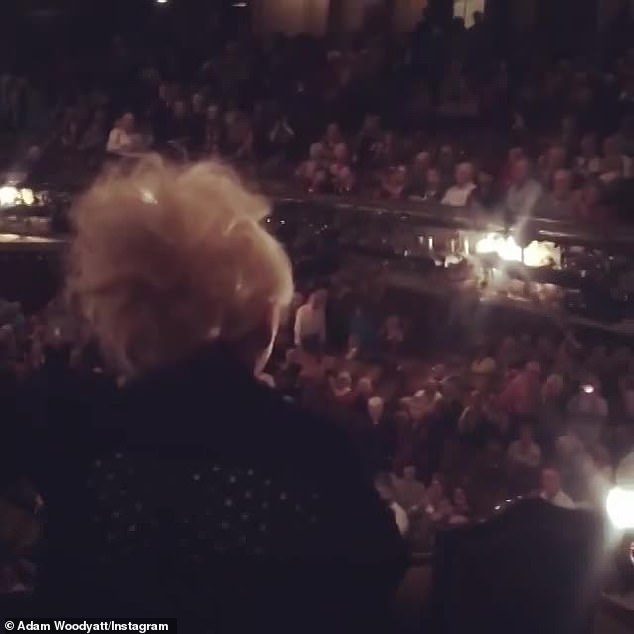 Emotional: Scott got emotional when he revealed he captured a glimpse of the ‘old’ Barbara during their ‘wonderful’ night at the theatre

EastEnders actor Adam, who plays Ian Beale in EastEnders, also brought his wife Bev along for the night at the theatre.

In the past, Scott has often discussed Barbara’s incurable Alzheimer’s disease and the devastating consequences of it.

He gave an emotional update on the Carry On legend’s condition on Loose Women as he stressed he has no regrets about going public with her condition as ‘it couldn’t be hidden anymore’.

Talking about the day the star got her diagnosis, the devoted husband said: ‘It wasn’t for maybe 18 months, two years, her neurologist did the final test and called us in. From that day life changed.’ 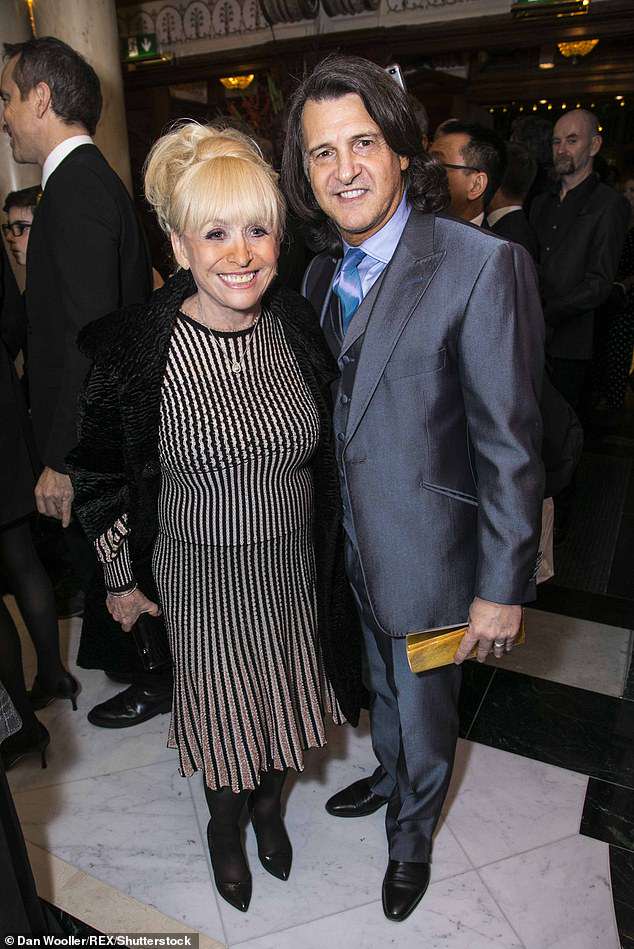 No regrets: Dame Barbara’s husband has said he doesn’t regret going public with his wife’s Alzheimer’s diagnosis as ‘it couldn’t be hidden anymore’ (pictured together in 2017)

He added: ‘We were sitting down and Dr Kennedy said, “Look I’m really sorry but it is Alzheimer’s that you’ve got”. She looked at me and said, “I’m so sorry”.’

Scott finally went public with Dame Barbara’s illness on social media in May, and insists placing it in the public forum was the right thing to do.

Speaking to the panel, he said: ‘It’s only been a positive experience since [sharing the diagnosis].

‘For me, it was four years that we kept this quiet. The relief when I finally did do the interview with Jane [Moore] was just incredible.’ 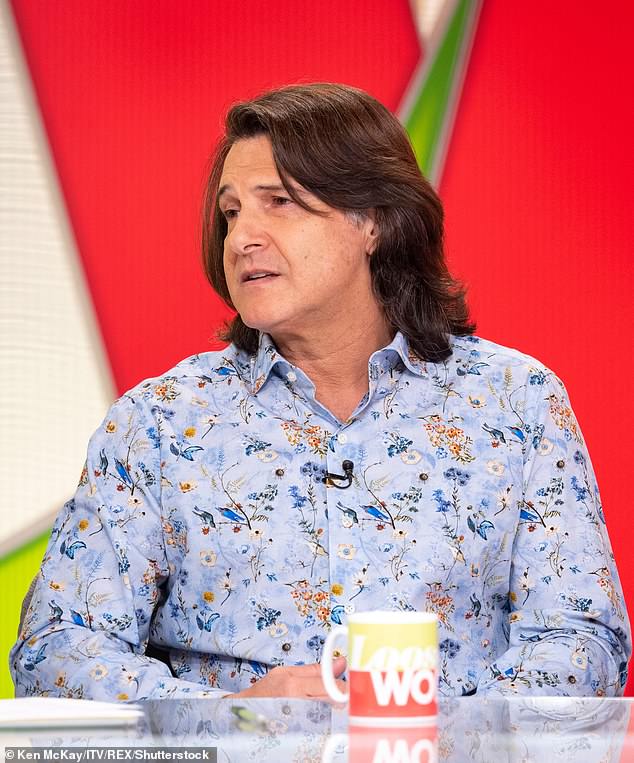 On the show: The former ‘EastEnders’ star’s spouse Scott Mitchell gave an emotional update on his wife’s condition when appearing on Loose Women on Monday 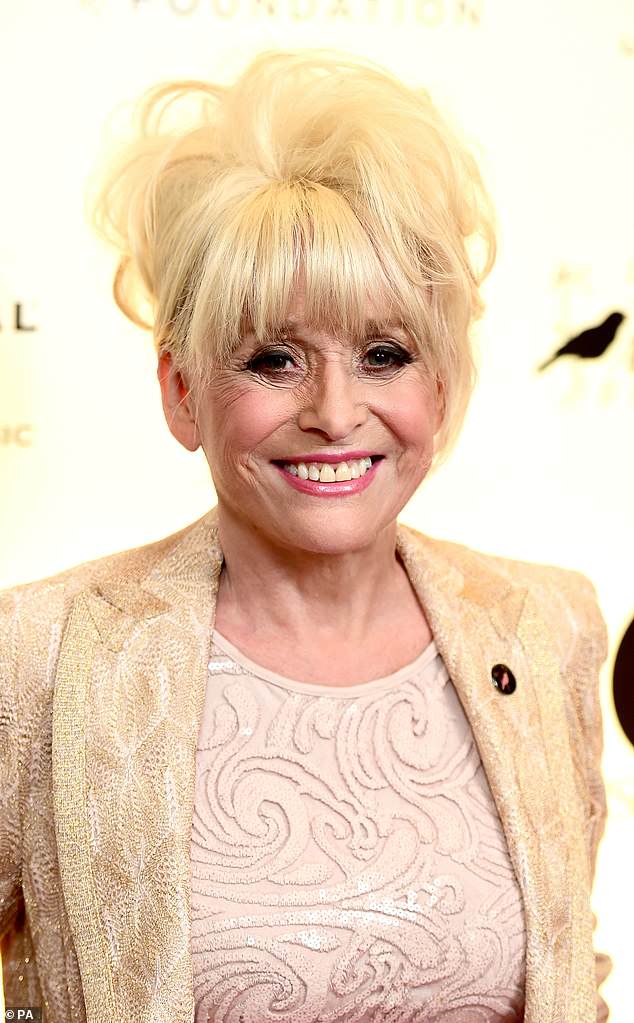 The diagnosis: ‘We were sitting down and Dr Kennedy said, “Look I’m really sorry but it is Alzheimer’s that you’ve got”. She looked at me and said, “I’m so sorry”.’

Scott said he didn’t want his wife to ‘come across as if she was being kind of silly or people looking at her thinking, “That’s a very strange thing to say”, if she failed to recognise old friends.

He added: ‘I noticed as it progressed it was getting more difficult, let’s say if we were in the taxi she’d ask the taxi driver most likely eight times where he lived. Every now and again you’d see someone look up in the mirror. It couldn’t be hidden anymore.’

The devoted husband told viewers that his wife had grown increasingly forgetful and had ‘lost her sparkle’ once leaving EastEnders in 2010 and so asked her to seek medical advice.

Yet ‘deep down’ he had no idea that she would receive the devastating diagnosis. 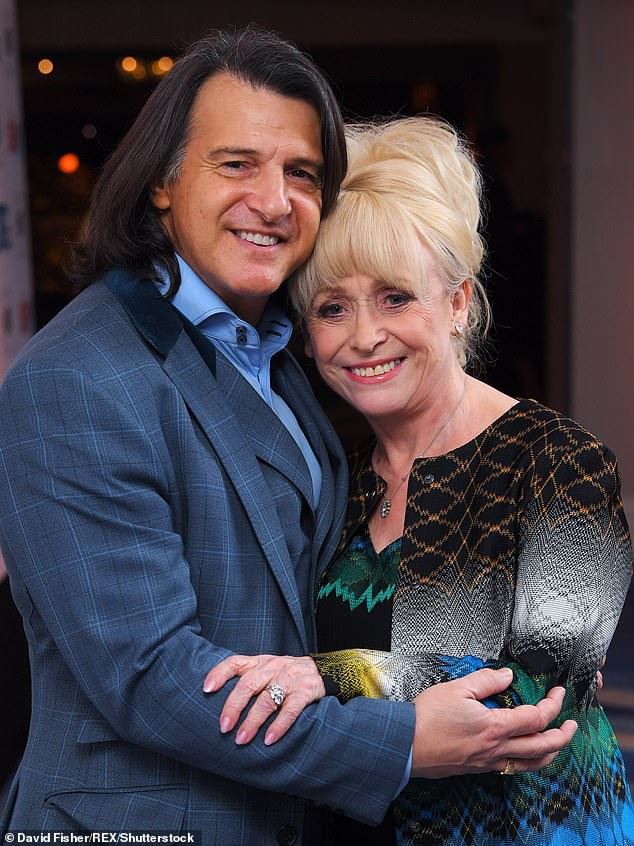 Personality: The devoted husband told viewers that his wife had grown increasingly forgetful and had ‘lost her sparkle’ once leaving EastEnders in 2010

Dame Barbara made an appearance on camera for the first time – as Scott says that ‘there is still so much of her there’ despite her illness.

In a poignant appearance, the former Carry On and EastEnders star was filmed in her home – while Scott said she still had her ‘humour, wit and care’.

During the video, Dame Barbara calls on people to run next year’s London Marathon in aid of a campaign to raise funds and change attitudes towards the condition.

Wearing a blue Dementia Revolution T-shirt and her blonde hair up in a bun, she says: ‘I’m asking you to make a stand against dementia.’

She says taking part will ‘support ground-breaking research to find a cure for a condition that affects so many people, like me. With your help we can and will end dementia with research’. 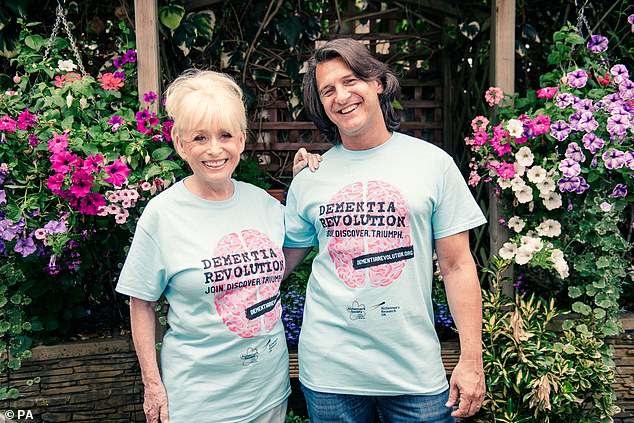 Together: The former Carry On star appeared calling for people to take a stand against dementia alongside her husband, Scott (pictured)

Scott announced that he will run the 2019 Virgin Money London Marathon for his wife and the millions of people around the world who suffer from dementia.

‘The last few years have been really hard for both Barbara and me as we got used to the profound effect dementia has had on our lives,’ he said.

‘I have seen many changes in Barbara since her diagnosis and at times its effects can be stronger than others.

‘We kept her diagnosis quiet for so long and we were really nervous about going public with the news – but when we did, there was such an incredible reaction of love and support.

‘Sometimes Barbara still thinks no one knows about her condition and makes a big thing of keeping it a secret when we see people we know or meet people.’

He said he had ‘many conversations’ with the star in recent months to explain that it was no longer under wraps.

‘Despite all the changes in Barbara, there is still so much of her there.

‘Her humour, wit and care for others for example. It is her humour I love the most,’ he said.

Scott said of the marathon: ‘I don’t know how fast I will run it, but for me it is more about completing the marathon, no matter what the time, to show my support for Barbara and all the other people living with dementia.’

Scott revealed earlier this year that his wife, who appeared in nine Carry On films in the 60s and 70s, had been diagnosed with Alzheimer’s disease in 2014.

He urged anyone who has got a place in the marathon ballot ‘and still isn’t sure who to run for’ to ‘join the Dementia Revolution team with me to show all our loved ones with dementia, like Barbara, that they are not alone’.

The Dementia Revolution is a campaign by the Alzheimer’s Society and Alzheimer’s Research UK to change attitudes to dementia and ‘raise millions of pounds for the most ambitious dementia research initiative the UK has ever seen’.

Alzheimer’s Society chief Jeremy Hughes said: ‘There are currently no effective treatments to slow, prevent or cure dementia, but scientists are working tirelessly to beat it. By joining the Dementia Revolution, we can and will end dementia with research.’

Alzheimer’s Research UK boss Hilary Evans said: ‘We’re urgently calling on people who have secured a place in the 2019 Virgin Money London Marathon to stand with us, join the Dementia Revolution and help change the lives of people with dementia.’ 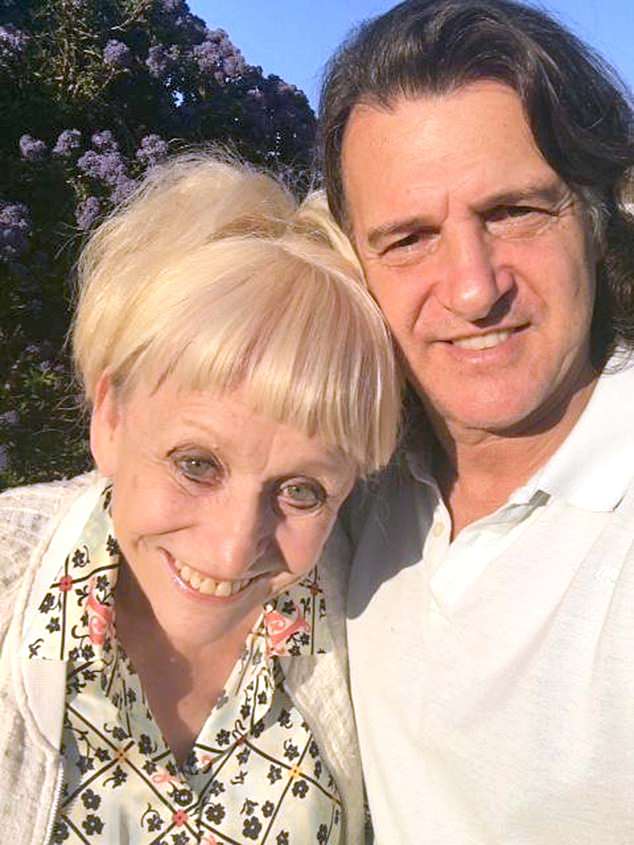