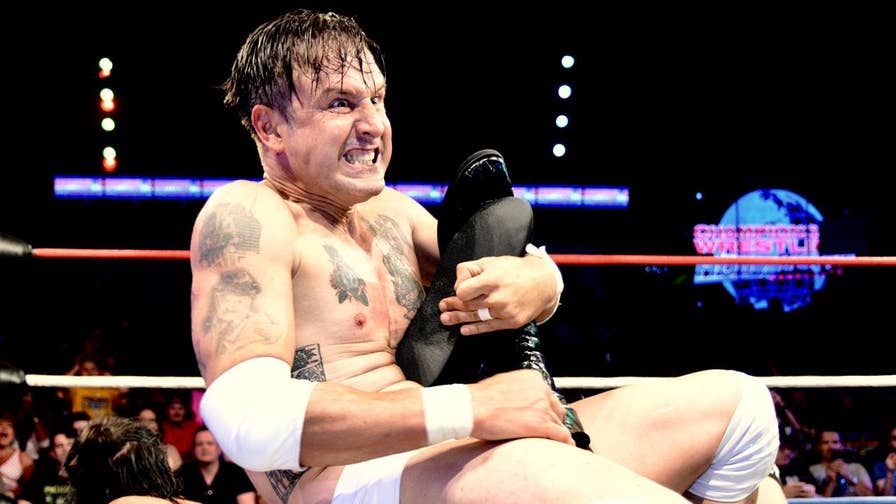 Actor David Arquette opens up about his transition from acting in hit movies like 'Scream' and 'Ready to Rumble' to wrestling champion.

After being a fan of wrestling for many years and even winning a heavyweight championship years ago, “Scream” actor David Arquette is returning to the ring to show the world that he’s still got what it takes.

The star sat down with Fox News to discuss his 2018 comeback as well as what he thinks of those who call the sport fake.

FOX NEWS: It’s been 18 years since “Ready to Rumble,” how did you get involved in that movie?

DAVID ARQUETTE: I don’t know exactly how I got involved in “Ready to Rumble.” It was just a script that came by, I’d been becoming off “Scream” so, when you have a hit movie it’s easy to sort of pick and choose. I was already a wrestling fan, so just the idea of working with Sting and Goldberg and Diamond Dallas Page (DDP) was amazing, and I just love the story and I love the director, Brian Robbins, he’s an amazing director and Scott Caan, Oliver Platt where involved. So, it was a great cast, great script, great director — easy decision. And I got to tour around, fly in a plane with Hulk Hogan and hear a bunch of stories and have a few drinks with Ric Flair, which was amazing. But I never thought anything else would come of it. I mean, to me, it’s really been an honor to be a part of wrestling, and I’m now making my return to wrestling as sort of a way of coming full circle.

FOX NEWS: Take us back when you won the WCW Heavyweight Championship and what was everyone’s thoughts backstage about it?

ARQUETTE: Yeah, there was a lot of heat backstage. A lot of people were upset, and understandably so. I mean, they’ve dedicated their lives to it, they’ve been training as wrestlers and touring and driving in cars for countless hours and, you know, a lot of them are also generationally involved with it. A lot of pride and heritage that goes with it, so I understand them being upset, you know. A lot of people didn’t know so, it was a big surprise to them too.

David Arquette in the WWE ring.

When they first approached me about becoming the champion I was like, ‘Are you guys sure this is a good idea?’ But, on the other side, it was also kind of a dream come true. I think almost every fan, when you’re in the audience, was like, “Oh, that would be amazing to be up there, to be a part of it and be a champion.”

I recently had an interview with Vince Russo and he explained to me why he decided to do that, and part of it was because I was a fan, because I was going around with Jeff Jarrett’s guitar and having everyone sign it and totally into it and he said that would be really interesting to have a fan win. There’s never really been a fan champion. I mean, now there has, there’s a little kid that won at WrestleMania, which I got compared to a lot. I am literally the low bar for all things wrestling, so that’s kind of the reason I’m coming back too, to sort of, you know, show them that… I never had an opportunity to train before, and I’ve been training every day.

ARQUETTE: When I first won the title, there was no Internet really. No Twitter craziness, so it just increasingly got more venomous, and when they changed the IHOP to IHOB, Bubba Dudley wrote: "That’s the worst idea since making David Arquette the champion.” So, it’s just like a way of shutting everyone up. It’s been great to get in shape and learn the moves and learn some chain wrestling and top of the rope stuff. I grew up loving it, I grew up going to house shows and seeing Andre the Giant and Hulk Hogan and just being amazed by the whole production. There’s a real performance element to it and I don’t think it gets the credit it deserves. Wrestling has always been sort of the red headed step child …. sorry to all the redheads out there, but they sort of got the short end of the stick in the entertainment world.

Although The Rock has sort of come out and shown some of the value in it, I still think there’s so much more. That’s sort of just the ignorance of Hollywood, which I also want to sort of help to try to shine a light on. The other thing is putting over wrestlers that are in the independent circuit and are coming up. Like RJ City, I’m teaming up with them now and just getting them some publicity and, you know, have people be aware of them.

FOX NEWS: What advice would you give to anyone who is being bullied on social media, like you have been?

ARQUETTE: One thing about being bullied online is you can’t take it personally. A lot of the people are dealing with their own issues, they have to lash out online so you really have to have a thick skin as an actor, as a wrestler and just as a person — a kid going to school even. So, my best advice is just not to take it personally and believe in yourself, just keep going and doing what you do, you know, there’s a lot of stuff going on about dreams and making your dreams come true. There’s a lot of people out there that don’t want my dreams to come true, but I don’t stop them, I’m still doing it and I’m still trying to prove them wrong. I literally feel like I’m Rocky, I mean like I’m in the gym sweating like crazy going to the gym every day for hours, you know, getting it so I don’t get winded so easily and putting on muscle losing a bunch of weight so it’s all about training, it’s all about determination, it’s all about, you know, believing in yourself.

FOX NEWS: You never took money for wrestling, is that correct? You even donated money?

ARQUETTE: I did it anonymously, but it got out I think because DDP was like, “Back off, this guy is a good guy, he donated the money to charities or wrestlers going through some hard times.” So yeah, that’s been part of it. I’ve never taken money for wrestling. I’m doing it out of the love of it and I’m in a fortunate enough position that I don’t need that for my career. It’s more of something to prove, and if I can help some people along the way, that’s what I’ve been doing.

FOX NEWS: What do you have to say to the people who always trash professional wrestling as “fake”?

ARQUETTE: “Wrestling’s not fake!” was a big line from “Ready to Rumble,” so I sort of incorporated it into my thing. Because one of the things that makes me maddest about people typically who aren’t wrestling fans, they’re like, “oh it’s fake” and it’s not fake. Three broken ribs will teach you that, but it’s also a ton of the hard work and incredibly skilled art form. I mean, people don’t refer to this as an art form, but it absolutely is. I’ve been acting for 29 years, and there are things within wrestling that I’m learning daily as far as a performer and an entertainer, but also athletically. It’s the one thing that does combined athletics and entertainment. So, there’s a lot to learn, and it’s not fake at all, I mean these guys dedicate their lives to it. They dedicate so much time and you have to spend a ton of time away from your family, and a lot of the time you’re working for either nothing or not a lot, so it takes a lot of heart and it takes a lot of dedication, it takes a lot of training, it takes a lot of commitment. So, when people say it’s fake, it really upsets me. And, you know, if it’s predetermined and choreographed in any way, it’s like predetermined or choreographed MMA. I had no idea like how hard-core the shots hit.

I took a knee in the face on my first match, broke three ribs on my preliminary match. So, yeah, it’s a real deal sport and it’s grueling, so anyone who thinks it’s fake, why don’t you get in that ring and check it out. I mean, I saw stars, I was saying to myself "don’t pass out, don’t pass out." It’s nuts man!

David Arquette battles an opponent in the ring.

FOX NEWS: Is there an end game for your wrestling career?

ARQUETTE: I think once you get the bug for wrestling, there’s an element to it that’s with you forever. That’s sort of why I am still here. Even though some people may not be happy about that. I love it. I’ll always be in the crowd, you know what I mean? I’ll always be watching matches, actually prefer watching matches because when you’re wrestling you have to stay behind the curtain or backstage and you can watch the monitor, but it’s not the same. There’s a whole psychology to it, and how you sort of keep the crowd a part of it and that’s been really interesting too, just working on stage and doing plays to sort of have a better understanding of what the audience is going through has been really helpful. Oh no, there’s no end game, I mean, you know, I love it. I’ve been loving it, so if anything I’ll just still be in the audience.

FOX NEWS: What current projects are you working on now?

ARQUETTE: I’m shooting a film right now called “Apalachin.” It’s based on a true story from 1957 about a New York State Police officer that figured out that there’s going to be a huge mob summit in Upstate New York and he alerted the FBI and busted 63 people/ They pretty much established that there are organized crime and it’s not just in Las Vegas, Chicago and  New York. It is throughout the country. So, it’s a pretty important time and a pretty important story. They enacted the Rico Laws after that and they really started cracking down on organized crime.

I also have a film called "Saving Flora" coming out, with Jenna Ortega, where I play her father and I run a circus. It’s a failing circus, and we have an elephant, but can’t use the elephant anymore because it’s sick and it’s too old. So we’re sort of like, we’re dying and we’re bleeding money and the circus is failing so I suggest taking the elephant out and putting it to sleep because it’s in pain and can’t live and it’s too expensive for us because we’re trying to drop it off at like a nature reserve. But, she ends up stealing the elephant and riding it across the country to this nature reserve, so it’s a really sweet story in the long run. Although I play a bit of a jerk, but that’s a fun movie.