Did Prince Harry And Meghan Markle Really Deny This Title For Archie?

Prince Harry and Meghan Markle’s son, Archie, was not given a royal title when he was born, which came as a surprise to many people around the globe. The Duke and Duchess of Sussex discussed this decision during their interview with Oprah Winfrey that aired back on March 7. “They didn’t want him to be a prince or a princess, which would be different from protocol. It was really hard….This went on for the last few months of our pregnancy where I’m going, ‘Hold on a second. How does that work? … If he’s not gonna be a prince, he needs to be safe,'” Meghan said, according to BBC News. Meghan went on to reveal that there were conversations about her unborn baby’s skin tone, and suggested that race may have played a factor in the palace’s decision not to give Archie a title.

A short time later, a palace source responded to the comments, telling Us Weekly, “the palace says it’s nothing to do with race. Under royal protocol established by King George V, only those in the direct line of succession to the throne get the titles [of] prince or princess.” As royal protocol would have it, Archie would be given the title of prince when his grandfather, Prince Charles becomes king. In June 2021, however, a new report from The Telegraph suggests that the palace did, in fact, offer Archie a title — but that Harry and Meghan rejected it. Read on for more.

It's still possible that Archie will become a prince 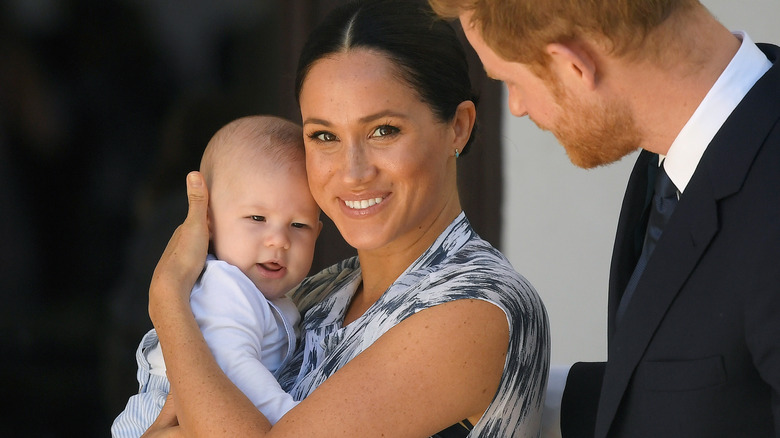 Prince Harry and Meghan Markle were reportedly given a choice of title for their son, Archie, but they rejected it outright. A source told The Telegraph that the newborn was to be given the title Earl of Dumbarton, but the Duke and Duchess of Sussex didn’t want to give their son a title with the word “dumb” in it. “They didn’t like the idea of Archie being called the Earl of Dumbarton because it began with the word ‘dumb’. They were worried about how that might look,” a source told the outlet. Another source added that “it wasn’t just Meghan who pointed out the potential pitfalls, it also bothered Harry.”

Meanwhile, a report from the Daily Mail claims that Prince Charles doesn’t want Archie to be given the title of prince — or any title really — because he’s trying to “slim down” the monarchy. “Charles has never made any secret of the fact that he wants a slimmed-down monarchy when he becomes king. He realizes that the public don’t want to pay for a huge monarchy,” a source told the outlet.

The royal family has not directly responded to any chatter surrounding Archie’s title — or lack thereof.