The star of Pocahontas getting drunk and arrested on charges of domestic violence? Believe it or not, this isn’t a decade-old story about Mel Gibson.

No, this is about an actress named Irene Bedard. Even if you’ve seen her pop in shows like Westworld, Longmire, or The Mist over the past few years you might not know the name, but you’d certainly know the voice. Irene breathed life into Disney‘s version of Pocahontas, becoming instantly iconic. She even reprised the role in 2018’s Ralph Breaks The Internet. She’s still getting plenty of acting work, too, as she’ll be soon be seen in the highly anticipated CBS All Access remake of Stephen King‘s The Stand.

But this week Irene’s name is in the news for a very different reason — after the 53-year-old was reportedly arrested twice in just four days!

The first arrest, per TMZ, came when police responded to a report of possible domestic violence at the actress’ ex-husband’s home in Beavercreek, Ohio.

According to her ex, she came over and barged in, yelling at their 17-year-old son and even kicking him when he tried to restrain her. Cops say they found her with a belt in her hand, responding to their presence by saying something like:

“Look, they sent the white man to come get me!”

(In case you hadn’t realized, Irene is in fact Native American, of both Inuit and Cree ancestry. Even by 1995 Disney had figured out to avoid problematic casting. Well, except for Mel Gibson, sure, but you have to remember he was America’s Oscar-winning boyfriend then!) 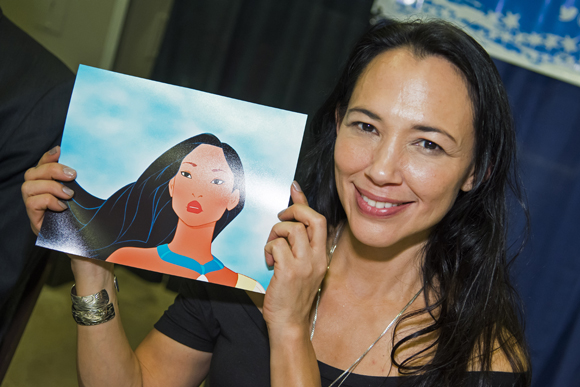 Police say Irene continued kicking and screaming as they dragged her to their squad car. Their report also mentioned she was three sheets to the wind; in addition to smelling of liquor she could barely stand up straight.

Alcohol seems to have been the driving factor here. TMZ‘s sources in the Beavercreek Police Department say Irene’s son did not want to press charges against his mother, hoping she would get help instead.

The BPD must have ignored that plea because they arrested her and brought her to the station, charging her with domestic violence, assault, and resisting arrest. This was Friday.

Irene got bailed out, which turned out to be unfortunate for her.

Just three days later, on Monday, the actress was arrested again when police were called to a disturbance at a hotel. Irene was accused of harassing the clerk at the front desk; the responding officer said he tried to talk her down, but she was too drunk. He says she charged him, and he had to cuff her — though he had a hard time doing so. In fact, it apparently took several officers to get her into the car this time.

The second arrest she was charged with disorderly conduct — and this time she was denied bail.