EDEN CONFIDENTIAL: Tale of Camilla's nephew is to be made into a film

EDEN CONFIDENTIAL: Amazing tale of the Duchess of Cornwall’s nephew – an autistic savant pianist nicknamed ‘the human iPod’ who can play music after hearing it once – is to be made into a film by creators of The King’s Speech

Their Oscar-winning film about George VI transformed perceptions of the Queen’s father, and now the team behind The King’s Speech are to tell the fascinating true story of another royal relation.

I can disclose that the Duchess of Cornwall’s former nephew, Derek Paravicini, is to be the subject of a major new movie.

Paravicini, 41 — who is the nephew of Camilla’s first husband, Andrew Parker Bowles, and the cousin of her two children — is an autistic savant nicknamed ‘the human iPod’ because of his remarkable ability to recall and play almost any piece of music, even if he’s heard it only once.

The film’s screenplay is being written by David Seidler, who won the Academy Award and a Bafta for Best Original Screenplay for The King’s Speech, which starred Colin Firth. 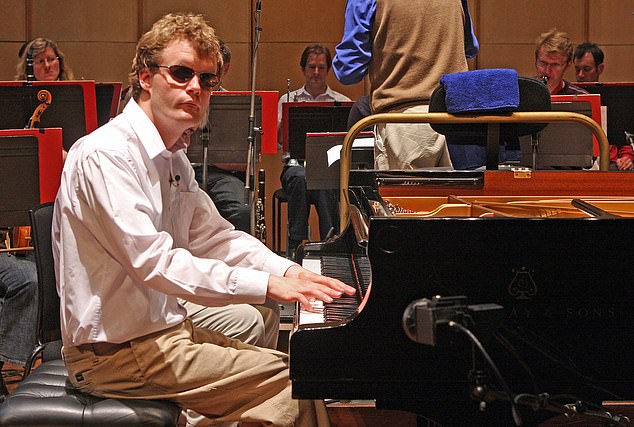 Derek Paravicini, 41 — who is the nephew of Camilla’s first husband, Andrew Parker Bowles, and the cousin of her two children — is an autistic savant nicknamed ‘the human iPod’ because of his remarkable ability to recall and play almost any piece of music, even if he’s heard it only once

‘It’s very exciting,’ Professor Adam Ockelford tells me. His book about Paravicini, In The Key Of A Genius, is being used by Seidler.

‘The screenplay is being written at the moment. Seidler is based in New York, so he’s been on Zoom calls with me and Derek. It will be based around Derek’s childhood years between the ages of five and ten, because these were key to his story.’

Born at 25 weeks, Paravicini began playing the piano at the age of two when his nanny gave him an old keyboard. When he was older, he was presented with a Barnardo’s Children’s Champion Award by Princess Diana.

Producers hope it will be a similarly inspiring story as A Beautiful Mind, the hit Hollywood film in which Russell Crowe played John Nash, the Nobel Prize-winning mathematician who suffered from paranoid schizophrenia. 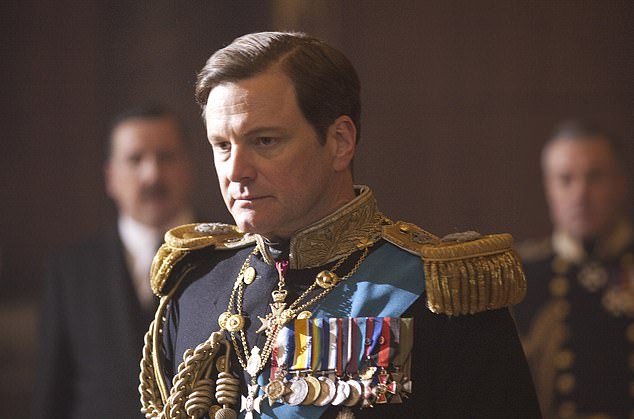 The film’s screenplay is being written by David Seidler, who won the Academy Award and a Bafta for Best Original Screenplay for The King’s Speech, which starred Colin Firth (pictured above)

Called the ‘Rouser Trouser’, the £550 black stretch leather garment features an invisible zip at the side ‘so you can slide in and out with ease’

The smart set’s talking about…

The Lucan name has been notorious since the 7th Earl went missing after the murder of his children’s nanny. But could it now become a byword for something rather more jolly?

For I hear the current Earl of Lucan’s wife has designed a pair of trousers that has left her society chums agog. Called the ‘Rouser Trouser’, the £550 black stretch leather garment features an invisible zip at the side ‘so you can slide in and out with ease’.

The Danish-born Countess tells me: ‘We love to have fun with all our garments. And we love a play on words — that British sense of humour. Essentially, it’s all about good vibrations.’

They are modelled here by Made In Chelsea star Olivia Bentley, while the 8th Earl, George, left, also stars in her Lucan Fashion campaign. ‘He pretends he doesn’t like modelling, but he’s a natural in front of the camera,’ adds the Countess, Anne-Sofie.

The couple have called their daughter Vaila, the name of one of the Shetland Isles.

A friend tells me: ‘The family are delighted.’ Petra’s father, Peter, was a confidant of Princess Diana — and when she married Lovat in 2016 Princess Beatrice was among the guests at their lavish wedding.

Prince Harry seems to have enjoyed his rock-star reception at a recent charity concert in LA.

I’m told he plans to use his growing status in Hollywood to throw a star-studded concert at next year’s Invictus Games. ‘A spectacular concert which will either close or open the Games is being discussed,’ a source tells me.

The Prince revealed this week that he regularly exchanged text messages with the Canterbury-born actor, explaining: ‘We sort of keep in contact because of the paparazzi.’ 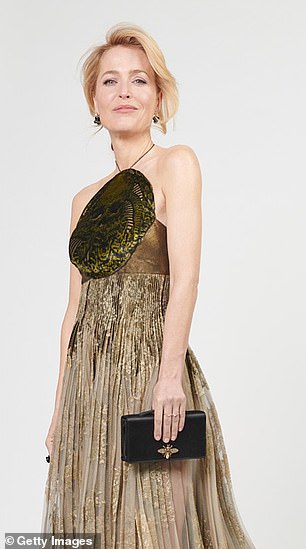 The actress, who plays Margaret Thatcher in the hit Netflix drama, has confirmed that she and Morgan, bottom, have split up

Gillian Anderson has kept shtum about the status of her relationship with The Crown creator Peter Morgan since it was rumoured she’d taken him back after his month-long romance with TV producer Jemima Goldsmith last year.

The actress, who plays Margaret Thatcher in the hit Netflix drama, has confirmed that she and Morgan, bottom, have split up. They had been a couple for four years until shortly before his fling with the 47-year-old daughter of late billionaire Sir James Goldsmith.

Anderson made the rare comment about her love life in an interview with a magazine supplement on wristwatches, of all places.

Describing a timepiece of Morgan’s, she refers to him as ‘my boyfriend at the time’.

She muses: ‘That was the first time I realised what a watch can do for a man’s attractability. For a very long time I kept saying, “Nice watch”.’

Clearly, his time’s now up. 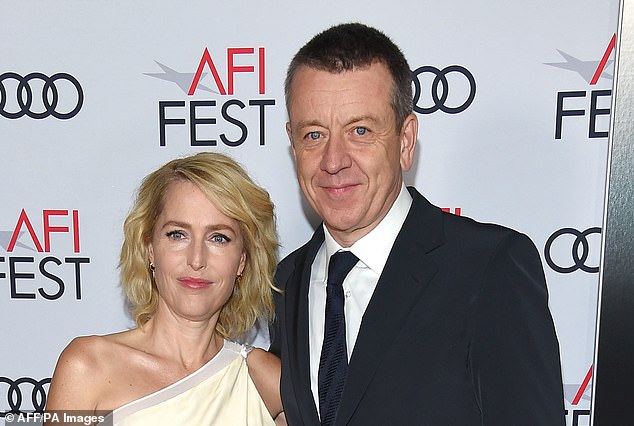 The pair, pictured together above in November 2019, had been a couple for four years until shortly before his fling with the 47-year-old daughter of late billionaire Sir James Goldsmith

Not another lame duck, pleads Anton

Strictly star Anton Du Beke refuses to give up on lifting the glitterball trophy, despite being usually lumbered with no-hopers as partners.

‘You look at a line-up of lady celebrities and you pretty much know who I’m going to get,’ laments the dancer, 54.

‘I mean, the 25-year-old lingerie model is probably not going to come my way. She’ll probably be swerving over to Giovanni [Pernice] or Aljaz [Skorjanec] or somebody like that.

Memorably caught in his grey underpants on a doorstep in the film Notting Hill, Rhys Ifans has now run into trouble with a wetsuit.

The actor squeezed into one for a spot of wild swimming but ‘couldn’t get out of it’.

He explains: ‘I was on my own in the house and it took me an hour and a half to get out of it. I was having panic attacks.

‘The thing was so tight around neck, it was like being born — the trauma.

‘I was red. I was trying to hook the back zip onto the door handle and in the end, I thought, “I’m going to have to drive to the local pub and ask for help.” It was literally like I’d been vacuum-packed.’

Amanda’s still a party rebel at 61 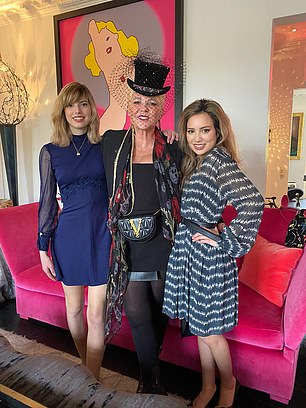 The former wife of sportswear tycoon Johan Eliasch threw a party on Thursday at her £8.3 million Chelsea house for 12 friends including pro-Brexit campaigning sisters, Beatrice and Alice Grant, pictured with Amanda

The former wife of sportswear tycoon Johan Eliasch threw a party on Thursday at her £8.3 million Chelsea house for 12 friends including pro-Brexit campaigning sisters, Beatrice and Alice Grant, pictured with Amanda.

To celebrate her 61st, unmasked guests drank champagne and feasted on chilli con carne and cake. ‘We’ve got to get back to normal,’ Amanda tells me.

‘We don’t need a nanny state to tell us to be careful. We can all operate using intelligence.’

The party ended at 9.30pm, she adds, so as not to upset her super-rich neighbours.

Invited to dinner with friends next week? You might take wine or a bunch of flowers, but Vogue’s queen bee, Dame Anna Wintour, can expect something altogether more chic.

Wintour has revealed that guests bring her a piece of vintage pottery. She’s potty about Clarice Cliff’s Art Deco china, which can sell for thousands of pounds.

‘I don’t think I’m the easiest person to buy gifts for, but my collection has been very much enhanced by the generosity of others,’ says Wintour, who now has an astonishing 1,293 items on display.

‘One day, it will be me and my daughter arguing about which Clarice Cliff plate to eat the cat food from.’

Prince Michael of Kent might be keen to do business with Russia, the country described as our ‘most acute threat’ to national security, but the Queen is taking steps to protect the palace.

The Royal Household is advertising for a key member of its cyber-security team. The advert on the royal website says the successful applicant for the job will have a ‘vital role in delivering our cyber security and resilience strategy’.

On an annual salary of up to £60,000, the cyber ‘guru’ will ‘monitor our network and systems, identify potential security threats and lead on response activities’.

The palace fights back!

Savile Row tailor Richard James, whose suits are worn by Prince William, David Beckham and George Clooney, should be preparing for a boom as workers plan a stylish return to the office, but the firm has been hit by disaster.

I hear that 60 per cent of its new shirt collection was stolen in transit from the Continent. Thieves are said to have stolen hundreds of shirts priced between £144 and £195, costing the company thousands of pounds.

A source tells me: ‘We’re in a race aginst time now to replace these shirts.’

The designer is due to celebrate 30 years in fashion next year.

Edgy artist Pauline Amos, who once asked fans to daub her naked body with paint, is luring gallery-goers back next week with an exhibition to celebrate the end of lockdown.

Called Art In The Age Of Now, the show of 40 artists’ work will be the last at Fulham Town Hall before the London venue is converted into a boutique hotel. ‘I’m very proud to be a part of this,’ says Amos, who’s married to former Army officer Tim Spicer. ‘You’ll get to see this incredible art, and you’ll also see this incredible building.

‘The collaborative part of it has been a saviour for some people, as they were sinking in isolation.’