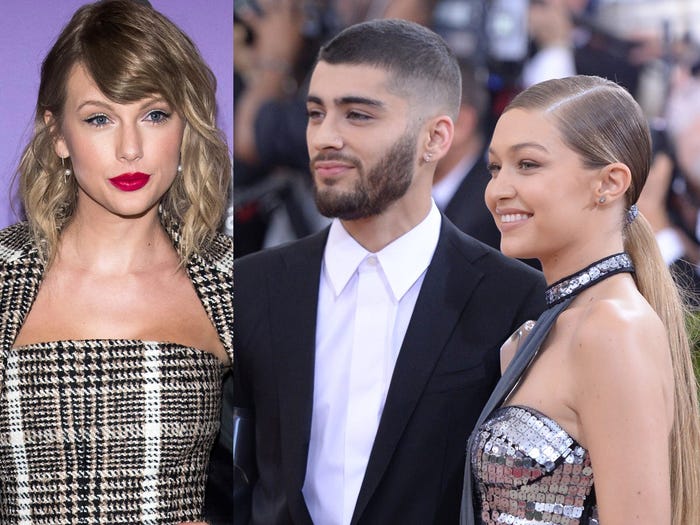 Taylor Swift's fans think that her new album, "Evermore," contains a reference to the name of Gigi Hadid and Zayn Malik's baby girl who was born in September.

On Friday, Swift dropped her ninth studio album, which she described as the "sister record" to her "Folklore" album that was released earlier in 2020. Like "Folklore," Swift's recent album was written and recorded during the coronavirus pandemic.

The new album is also filled with plenty of details, references, and Easter eggs — and fans are convinced that the eighth track, "Dorothea," is a nod to the still unknown name of Hadid and Malik's daughter.

People think it's a plausible theory since Swift previously revealed on "Folklore" that Blake Lively and Ryan Reynolds' third child is named Betty.

And if the couple didn't name their baby Dorothea, fans also think that perhaps the child is named Willow, Marjorie (the name of Swift's late grandmother), or Ivy — since those names are also incorporated in "Evermore."

They also believe that Dorothea is a strong contender based on an Instagram post shared by Hadid on November 30.

Hadid and Malik revealed the birth of their first child together in September by sharing black-and-white photos of the baby.

Since then, Hadid has posted several photos of her and her newborn. However, neither she nor Malik have told fans the name of their child. They've also chosen not to show their baby's face in photos.

Back in September, the model revealed that "auntie" Swift sent the newborn a pink, handmade blanket. Swift's gift came as no surprise to fans since she's known the couple for years, and has also sent baby gifts to other celebrity couples this year like Orlando Bloom and Katy Perry.

There's also a line in Swift's song "Invisible String" that alludes to the singer possibly sending Joe Jonas and Sophie Turner a baby gift this year: "Cold was the steel of my axe to grind / For the boys who broke my heart / Now I send their babies presents."

Malik previously collaborated with Swift for the song "I Don't Wanna Live Forever," which was released in 2017 as part of the soundtrack for the film "50 Shades Darker."

Meanwhile, Hadid reportedly met Swift in 2014 at a pre-Oscars bash with mutual friend Karlie Kloss. She became a close friend of Swift's and appeared in the singer's star-studded 2015 music video for "Bad Blood."

Most recently, Hadid marked Swift's 31st birthday by sharing a photo of them together and a video of them hugging.

"Happiest 31st year, my T! Wish we could be together to celebrate. Love u so much," she wrote.