“A large sum of money is coming to you,” the letter read, the words bolded alongside a headshot of an alluring woman with a subtle, knowing smile. “Please refer to the enclosed document for the latest directives to receive the check for $7,800!”

Another promised $31,790.99, bestowed unto the reader by Belisama the Very Brilliant, who “attracted” the sum of cash. The letter’s writer and his fellow Druids conferred and decided to “scatter” this opportune bounty across the reader’s “path” for a mere fee of $45 ($50 if paying by money order).

A third offered the opportunity to obtain an “Invaluable Ruby” once owned by the Maharaja de Jaipur. The Maharaja gave the precious gem to “John,” who has selected you, reader, with your “pressing need for money and a blatant lack of luck,” as the new owner. Just follow the enclosed instructions and the stone, valued at $12,000, will be yours. 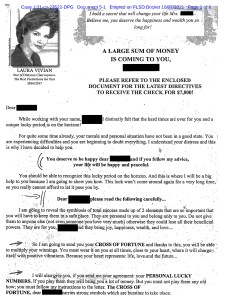 The letters were sent by three French residents running an international psychic mail fraud scheme in which tens of thousands of people were duped into forking over millions of dollars with the expectation that they would receive good fortune and various riches in return. The scheme was stymied by the U.S. District Court for the Southern District of Florida, which permanently barred the three fraudsters and the two companies they worked with from participating in mass mailing campaigns.

The Justice Department announced the injunction on Friday. “The Civil Division’s Consumer Protection Branch will continue to investigate and bring cases to stop mass mailing fraud when it arises,” said Acting Assistant Attorney General Brian M. Boynton for the Justice Department’s Civil Division. “Individuals who perpetrate fraud schemes like those at issue here must be held accountable.”

The complaint alleges that Robert Lhez, Mireille Dayer, and Julie Poulleau sent hundreds of thousands of mailers across the United States. The letters would purport to be from individuals with psychic powers. The alluring woman with the subtle, knowing smile, for instance, was Laura Vivian, the “Star of Distance Clairvoyance.” To burnish Vivian’s bonafides for those who might have been skeptical, the fraudsters noted that she offered the “Best Predictions of the Year” for 2016 and 2017.

Vivian promised a $7,800 check if the recipient replied with urgency, with time sensitivity being a hallmark of the solicitations, as is the sense that the reader has been cosmically selected to receive the good fortune being offered. Those who paid the $45 requested did not receive a check, of course, but when the letter promised a valuable talisman, like the ruby, the faux-psychics were kind enough to at least send out “cheap trinkets purchased in bulk.”

Led by Lhez, according to the DOJ, the fraudsters had been operating since as early as 2012. The scheme was carried out with the help of two companies, Arcana Center and Partners VAD, which are co-defendants in the injunction. The United States Postal Inspection Service had been onto the trio for years before the injunction was handed down, withholding mail and seizing funds from Arcana Center that were deemed to be the result of the scam. “Thursday’s defendants have been known to Postal Inspectors for years, constantly changing their fraudulent schemes in the attempt to stay one step ahead of the law,” said Inspector in Charge Eric Shen of the U.S. Postal Inspection Service’s Criminal Investigations Group.

If you’re wondering who these tens of thousands of people who fell victim to what seems like an obvious scam were, they were primarily the elderly. Seniors are ripe targets for scam artists, with millions of up-there-in-age Americans falling victim to some type of confidence scheme every year, according to the FBI.

“Beyond financial losses, predatory fraud schemes like this one lead to immense emotional suffering for victims,” said Acting U.S. Attorney Juan Antonio Gonzalez for the Southern District of Florida. “We urge the public to question promotions that seem too good to be true and immediately report suspected fraud to law enforcement.”