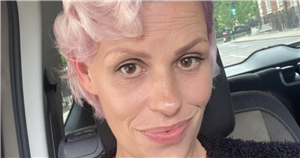 Fifi Geldof is the image of her late mother Paula Yates in her new Instagram photo.

The 38 year old took to Instagram to share a rare selfie with her 23,000 fans, sporting a head of pink hair.

The star penned: "Mink pink and 40s pin up curls!" before thanking those behind her look.

Fifi looked beautiful with her head of pink hair in a short curly style, and she partnered the look with soft, dewy makeup and a red polka dot dress.

Fifi looks just like her late mum in the snap, who tragically died of a drug overdose in 2000, aged 41.

The star is the eldest daughter of Bob Geldof and Paula and she normally sports brunette hair, but she's switched it up for playful pink.

Fifi married sand sculptor Andrew Robertson in Kent in 2016, at the same church where her mother and sister Peaches are buried.

She wore a traditional lace veil and a gorgeous dress, and looked every inch the blushing bride.

Her groom, Andrew Robertson, held her hand as they walked down the aisle, leaving Fifi to flash her purple manicure.

Keeping with the theme, guests threw white and purple confetti petals over the couple after their ceremony.

Andrew wore a black suit with a white shirt, and and coordinated with his bride with a purple tie.

Fifi and Andrew also banned phones and cameras from the event, in order to keep the occasion private.

Guests were photographed handing their phones and cameras in to security before entering the church, who kept them safe during the ceremony.

Thomas, then 23, was left a single father after Peaches died aged 25, at their home in Kent.

Astala, then 11 months remained in the house for eight hours after his mother's death.

On discovering her body, Thomas recalled how his first thoughts were of their children and that he was not surprised of her death.

"When I found her, I was not surprised. I thought to myself at the moment, 'Yes of course – you had to do that.' What I can remember, it must have been an hour after I've found it, that it's time for the kids' lunch," he said to German newspaper Bild.

The musician continued: "They needed their lunch. So I took the children's chairs to the table, took the yoghurts out of the fridge, the bananas. After that we drove here, escorted by the police.

"The routine I had to keep up with the children helped me a lot. They have lived longer than they knew their mother. They were just one and two years. Now they are four and five."