The younger sister of the late track star was hit by a truck while walking near the Elizabeth Lyle Robbie soccer stadium in Falcon Heights, Minnesota, to see her boyfriend coaching a match.

AceShowbiz -Abigail “Abby” Anderson has passed away. The sister of the late professional runner Gabriele Grunewald was killed after being struck by a suspected drunk truck driver. She was 29 years old.

The younger sister of the late track star was hit by the vehicle while walking near the Elizabeth Lyle Robbie soccer stadium in Falcon Heights, Minnesota, on Saturday evening, August 14, around 7 P.M., according to the Ramsey County Sheriff’s Office. After the tragic accident, she was transported to Regions Hospital, where she later died from her injuries.

According to the sheriff’s office, Abigail was walking near the stadium when a truck hit a parked car, which in turn struck her. The driver of the truck then tried to flee the scene, making a U-turn and running over her a second time.

The truck driver has not been identified by authorities at this time. However, officials stated that the driver has been taken into custody and underwent a blood test due to suspicion of DUI.

Abigail’s father, Kim Anderson, told the Star Tribune on Monday, August 16 that his daughter was going to the soccer field to see her boyfriend coaching a match. He also claimed that the family has only been told little about the crash other than “it’s a criminal investigation at this point [involving] inattentive driving” by a woman behind the wheel. “We’re just driving around trying to get our heads around it,” he added.

“She had a superfun personality, upbeat, a great sense of humor and a unique laugh that we all love,” Kim continued, remembering his daughter. “She gave it her all.”

Mourning over Abby’s death was Kara Goucher, the Duluth distance running standout and Olympian. On Monday, August 16, the athlete took to her Twitter account to share a tribute to the 29-year-old runner. She wrote, “I am heartbroken. Sending so much love to the Grunewald family. And from someone who lost her father to a drunk driver 39 years ago, I am filled with so much anger that this is still happening. Inexcusable.” 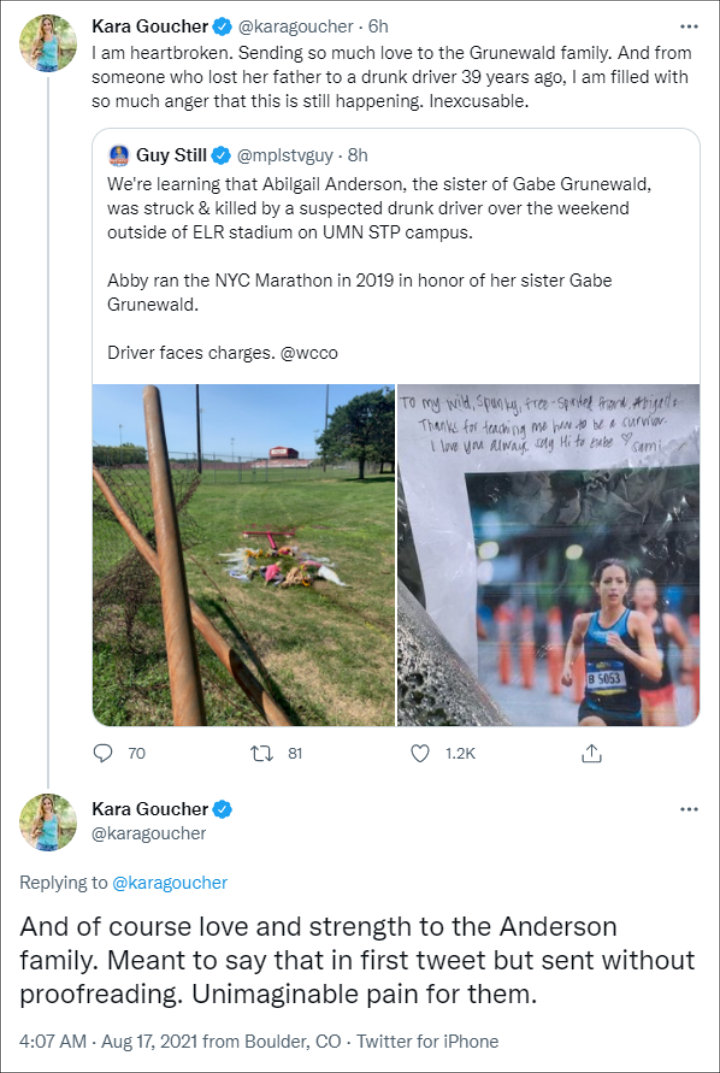 “And of course love and strength to the Anderson family,” Kara continued in a separate tweet. “Meant to say that in first tweet but sent without proofreading. Unimaginable pain for them.”

The University of Minnesota Athletics also paid tribute to Abigail via Twitter. Alongside a photo of the former Gopher, a statement read, “Our hearts are broken as Gopher alumna Abby Anderson tragically passed away over the weekend. Our thoughts are with the Anderson family and all of Abby’s loved ones.” 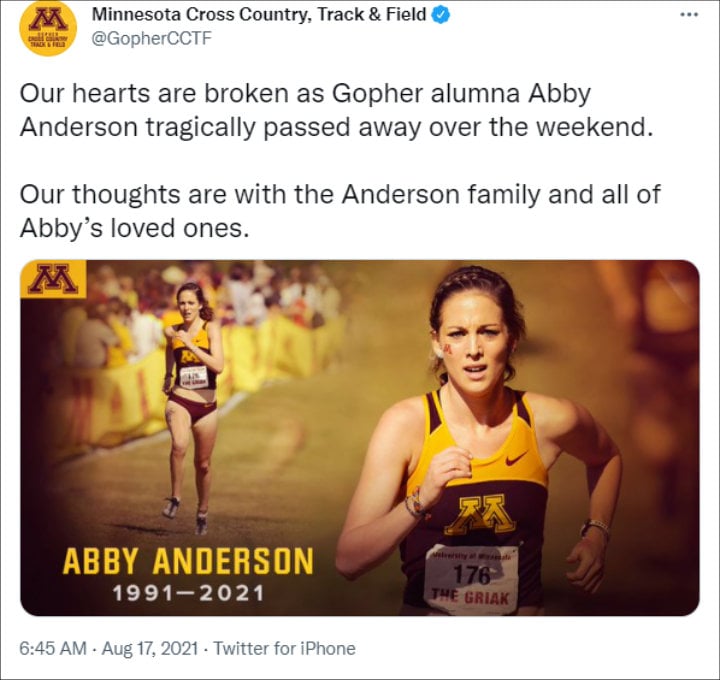 The University of Minnesota Athletic mourned over Abigail’s passing.

Along with her parents, Abigail is survived by her twin brother Benjamin and two older brothers, Zachary and Caleb. The funeral arrangements in Perham are still being organized.