Gemma Atkinson, 34, told her one million Instagram followers she has had a few health problems along her pregnancy journey.

The former Strictly Come Dancing star uploaded a picture of a baby meme with the words “Are you serious?” to divulge all on her health.

Gemma revealed she has so far had four kidney infections, having been diagnosed with the illness again this morning.

She began her lengthy update: “Today’s post is the glamorous subject of Kidney infections! Yes, I’m going there. I’ve had 3 so far during pregnancy and this morning I was diagnosed with my 4th.” 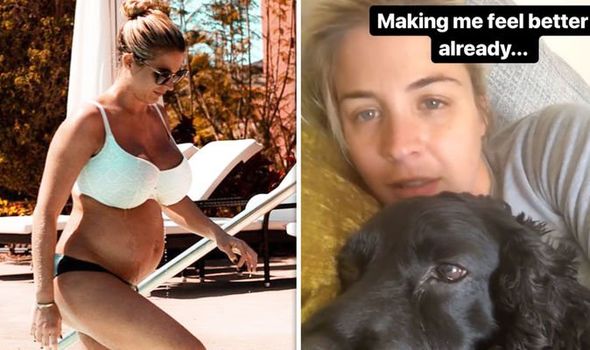 “The first two I knew nothing about, the third one floored me and I actually ended up in A&E with it back in early April.

“Apparently some woman are just prone to them (I’m clearly not a doctor but I was told it’s because our uterus is so close to the bladder.”

She went on: “It apparently sits directly on top of it and the increased weight can block the drainage of urine causing an infection) The joys!”

Gemma revealed she was enjoying some time with her boyfriend Gorka Marquez at the cinema earlier this week, when she began to suffer the symptoms of a kidney infection.

“During mine & Gorks cinema trip I started with back ache but Avengers was a long ass movie so I thought maybe that’s why,” she said.

“In fact I pretty much looked like the exorcist At first I felt a tad embarrassed going to the Docs with just ‘back ache and sickness’ but thank God I did.”

Gemma continued: “I recognised my symptoms from last time, caught it quickly and its currently being treated.”

The star encouraged others who are pregnant to seek professional help when they don’t feel right.

“There’s lots of changes happening in our bodies when pregnant and it’s always better to have a check up, for peace of mind if nothing else,” she said.

The fitness star added: “The NHS have been wonderful in looking after me but in the nicest way possible I don’t want to see any of them again until I’m due to deliver.”