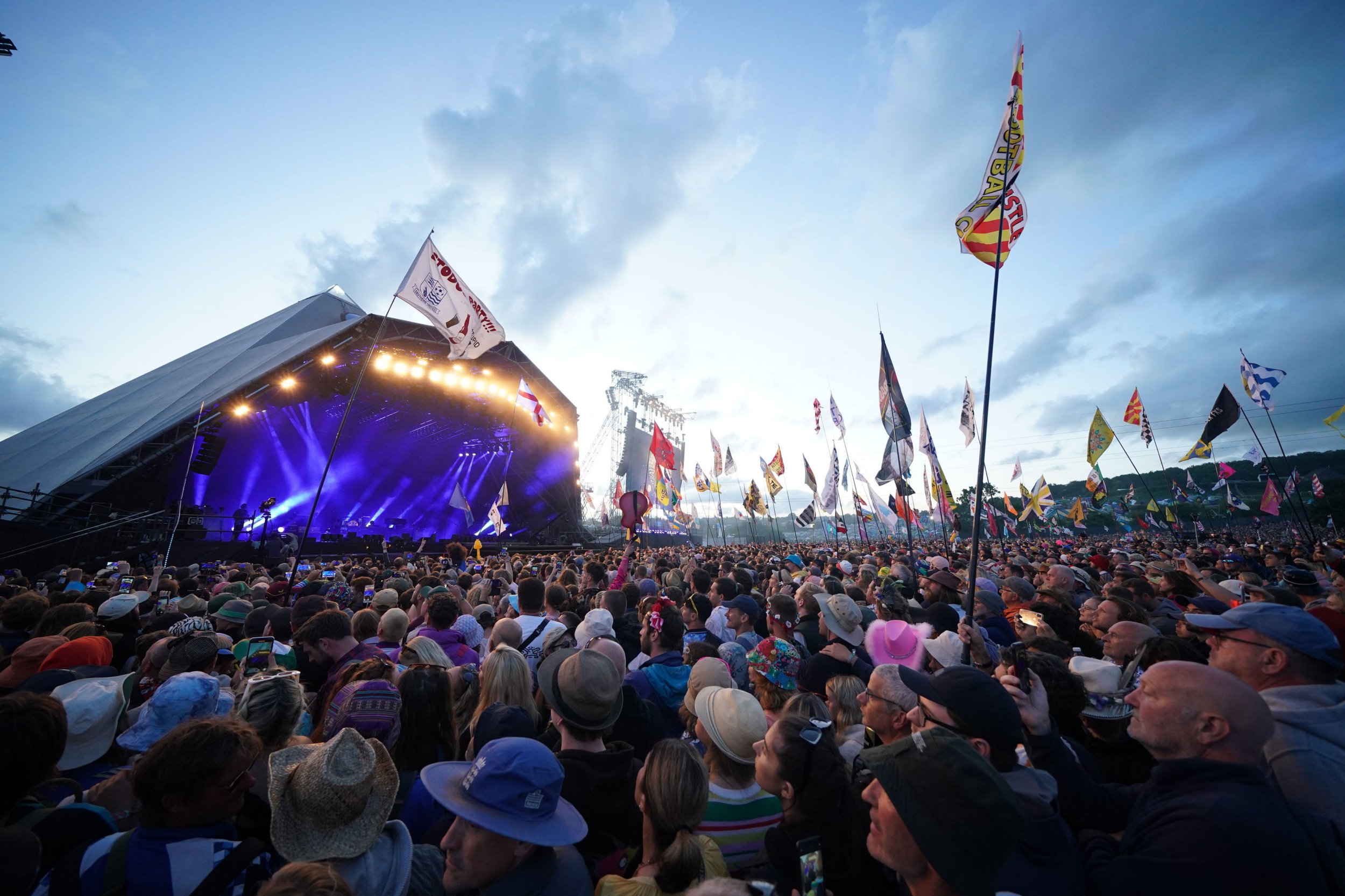 To further rub in the fomo for anyone who wasn’t able to get to Glastonbury this year, event boss Emily Eavis has declared it ‘the best one yet’.

Last night saw Kendrick Lamar close out the festival, which counted Billie Eilish and Sir Paul McCartney as fellow Pyramid Stage headliners, meaning another year of the massive Glastonbury was done and dusted.

Satisfied, weary, most definitely smelly fans were seen packing up their tents bright and early this morning and carting their gear out of Worthy Farm, with the clean-up job now well underway on the Pilton site.

And addressing the weekend that was, which saw people start to flood through the gates on Wednesday, Emily, who is the co-organiser of the star-studded event alongside her father Michael, shared a selection of pictures on her Instagram account from Sunday night.

She wrote: ‘Sunday rounding off an incredible weekend… thank you to everyone who came here and made it so special.

‘It surely was the best one yet!

‘A remarkable feat by all artists and crew, thank you to everybody who played a part and everyone who came and created such an amazing atmosphere of joy and love. Safe travels home. See you next year!’

Her message came as the clean-up operation on the site began, in an effort to return it from a pop-up city of 200,000 people to a Somerset dairy farm.

Beginning in the early hours of Monday morning, volunteers were shifting rubbish strewn across the 800-acre site as revellers began to make their way home following the headline performances, and other sets from the likes of Megan The Stallion, Olivia Rodrigo, The Libertines and Crowded House.

The clean-up crew tackled overflowing waste bins with big items such as camping chairs, blow-up mattresses, slippers, flip-flops and shopping bags needing to be disposed of, while they were also left picking up thousands of discarded items including paper cups and food containers after people descended on the area for the festival.

Volunteer Sean Kelly, 32, told the PA news agency: ‘I’ve been litter picking every day for hours. In the whole recycling team there are 2,500 of us and I’ve done it 10 years on the trot.

‘As a rule, everything is pretty much done early this year. There’s been a huge reduction in gas canisters this year, but there’s been a lot of vape bars and they are the only things you can’t recycle.

‘Most things get recycled here.’

Campers packed up their belongings and left the Somerset site early to brave traffic queues to get home as the rain descended following a festival that had defied ominous forecasts of thunderstorms and a yellow weather warning from the Met Office.

The music gods were quite literally shining down, we have to say!

Highlights from the festival’s special 50th year include history-making headline sets from Sir Paul and Billie as well as Kenrick’s dramatic demonstration for female rights which saw the singer chant ‘Godspeed for women’s rights’ before dramatically exiting the Pyramid Stage.

The Pulitzer Prize-winning rapper, 35, ensured his debut at the festival would be memorable, with his performance reaching a theatrical peak at the end as the lights came up during his rendition of new song Saviour, to reveal fake blood pouring down his face from a crown of thorns.

Earlier on Sunday, Diana Ross reeled off hit after hit when she took to the stage for her Glastonbury debut in the Sunday teatime legends slot.

The soul singer treated the crowd to a selection of classics including I’m Coming Out, Baby Love, You Can’t Hurry Love, Stop! In The Name Of Love and at the conclusion of Chain Reaction pink confetti was launched from the stage.

Another standout moment was Sir Paul’s Saturday headline show where he wowed the crowds with a show-stopping setlist which included surprise guest appearances from Bruce Springsteen and Foo Fighters frontman Dave Grohl.

As he took to the Pyramid Stage, the former Beatle became the festival’s oldest solo headliner, a week after he celebrated his 80th birthday.

During his more-than-two-hour set, he played a range of classic songs including Hey Jude, Blackbird, Live And Let Die, Ob-La-Di, Ob‐La‐Da and Get Back.

As part of Sir Paul’s encore, through special technology which could isolate John Lennon’s vocals from old recordings, he was able to duet The Beatles’ track I’ve Got A Feeling alongside his former bandmate.

The festival featured countless other memorable moments including Greta Thunberg delivering a passionate speech from the Pyramid Stage calling on society to take on its ‘historic responsibility to set things right’ with the global climate crisis.

It also hosted an array of Ukrainian representatives, with the country’s president Volodymyr Zelensky giving a poignant address via a video message ahead of the Libertines’ set, while Kalush Orchestra played their first UK performance since they triumphed at Eurovision 2022.

While heading to the festival, many artists and festival-goers had to battle travel chaos as major rail strikes took place during the event and many flights were delayed or cancelled.

However, these issues did not dampen spirits and nor could the infamous Glastonbury showers as the weather remained relatively dry compared with previous years.

Musician Gaz Coombes, lead vocalist of Supergrass who performed on the Other Stage on Friday, tweeted: ‘Had an amazing time playing #Glastonbury on Friday eve with SG. That place really is like no other. I mean where else would we get Billie Eilish watching from the side of stage singing along to our tunes!? 💕 Saw so much incredible music too. One to remember! #StrangeOnes.’

The Foals’ Yannis Philippakis also expressed his delight at having performed at Glastonbury, tweeting: ‘We’ve been lucky enough to have had many life-affirming transcendent moments in this band & Friday’s headline set on the Other Stage was up there with the best of them. @glastonbury you healing beast we needed you. What magic to be part of that…foals forever. Life is yours.’