Golden Globe Awards 2023: Ana de Armas sizzles in an eye-popping outfit as she is nominated for her portrayal of Marilyn Monroe in Blonde

Ana de Armas made a splash at the 80th annual Golden Globe Awards held at the Beverly Hilton Hotel in Beverly Hills on Tuesday.

The 34-year-old Cuban-born actress made the most of her red carpet moment in her eye-popping outfit, just days after opening up about being in pain for filming fight scenes with Keanu Reeves in the John Wick spin-off Ballerina.

The beauty, who used to date Ben Affleck, has been nominated for a Golden Globe Award in the category Best Actress, Motion Picture Drama for playing sex symbol Marilyn Monroe in the controversial film Blonde. 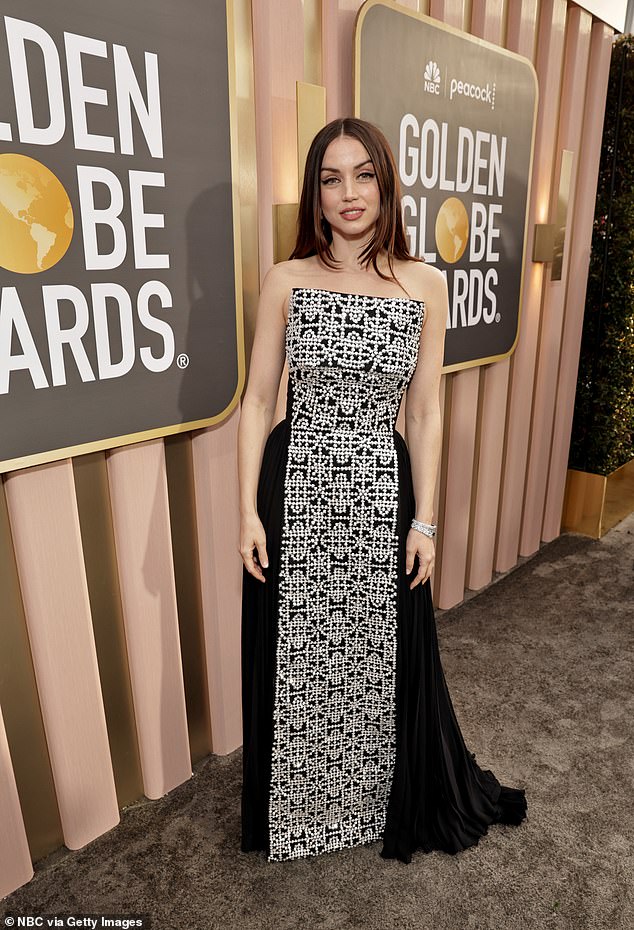 The 34-year-old Cuban beauty stepped out in a strapless diamond-encrusted black dress that fell to the carpet.

Her auburn locks fell just below her shoulders. while accessorizing with a diamond-encrusted bracelet.

She earned her second Golden Globe nomination for her portrayal of Marilyn Monroe in Blonde, going up against Cate Blanchett (Tar), Olivia Coleman (Empire of Light), Viola Davis (The Woman King) and Michelle Williams (The Fabelmans) in the Best Actress – Motion Picture Drama category, 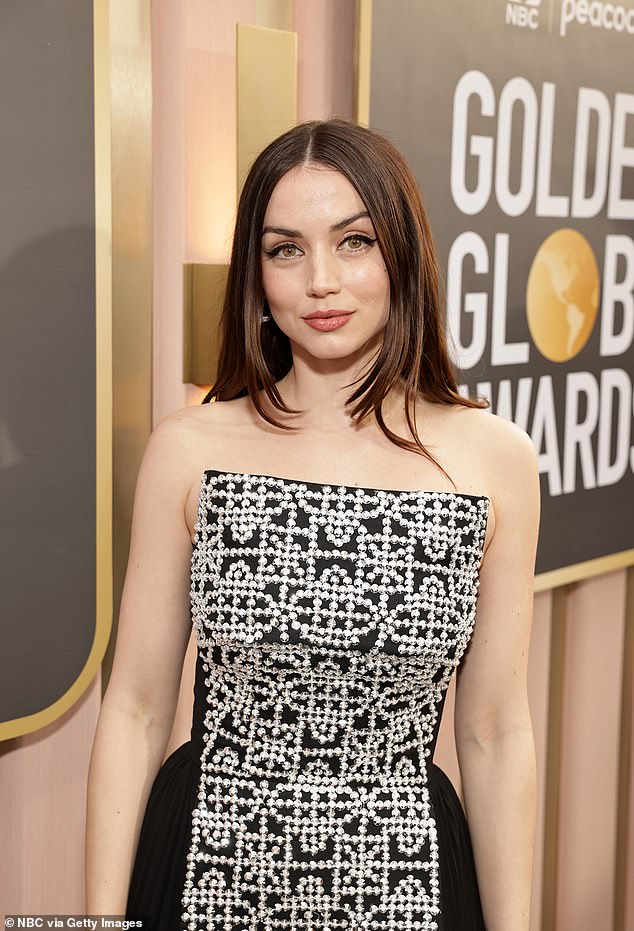 Last week Ana said she was able to painstakingly re-create Monroe’s scenes for Blonde as the acting icon’s films were being played on set at the same time as her shots.

The actress revealed the secret to getting her performance as Marilyn as accurate as possible on The Tonight Show Starring Jimmy Fallon a week ago when she was asked if she have to do every take ‘a thousand times.’

She said about 55-year-old director Andrew Dominik’s process: ‘A lot of times, yeah. 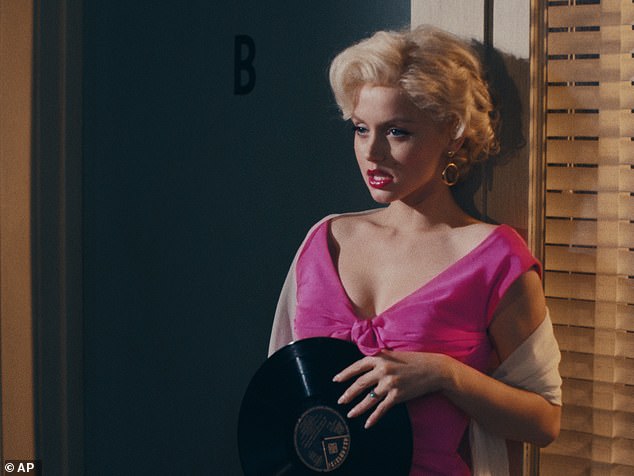 Re-create: Last week Ana said she was able to painstakingly re-create Monroe’s scenes for Blonde as the acting icon’s films were being played on set at the same time as her shots

‘Andrew is an incredible filmmaker and also very detailed and precise and it was really important for him and me and every department to really nail these re-creations.

‘And, so we had two monitors. Our movie and then Marilyn’s movie and they were playing both at the same time.

‘There was a moment where my hairstylist kept coming back and forth to me and the monitor to fix my hair and she was, poor thing, doing so many trips that I just go with her to the monitors. 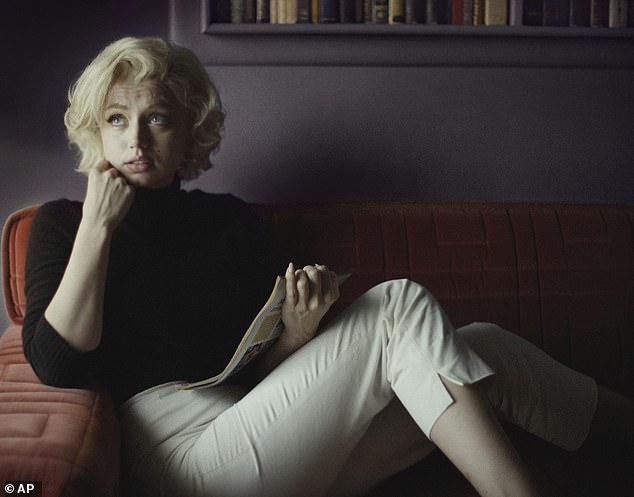 Her work: Ana has been nominated for a Golden Globe Award in the category Best Actress, Motion Picture Drama for her role as Marilyn Monroe in Blonde

‘And I realized that she is looking at Marilyn trying to fix my hair… she wasn’t looking at me.

‘So, yeah, it is a testament to, you know the incredible work that the art department and hair and makeup and wardrobe did.’

Ana also said she stunned the cast and crew of Blonde, which graphically recounted the brutal aspects of Marilyn’s life, by screaming on the set of her upcoming John Wick spin-off Ballerina when she was told she had been nominated for a Golden Globe Best Performance by an Actress in a Motion Picture – Drama award for her part in Blonde, released on Netflix in September. 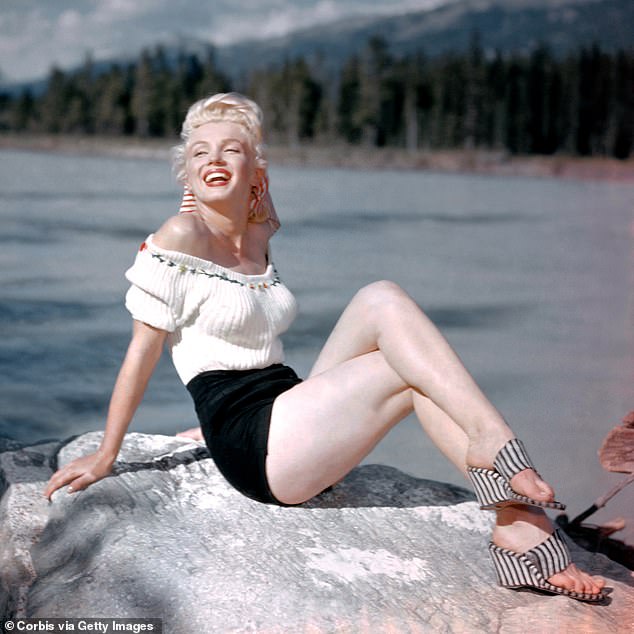 The real deal: Monroe seen on the set of the 1954 movie River Of No Return, directed by Otto Preminger; she died in 1962

She added: ‘So I’m on set and they were just like in between takes they’re changing lenses or something and my assistant comes with a phone, like, very straight faced and just gives me something to read and it was this text chain.

‘And I start reading, and then I realized what I’m reading, and I scream, but of course it was a stunt scene, so everyone got very worried thinking that something was happening.

2023 GOLDEN GLOBES NOMINATIONS: THE CROWN, THE WHITE LOTUS AND BANSHEES OF INISHERIN LEAD

Avatar: The Way of Water

The Banshees of Inisherin

Everything Everywhere All At Once

Glass Onion: A Knives Out Mystery

Michell Yeoh – Everything Everywhere All At Once

Colin Farrell: The Banshees of Inisherin

Brendan Gleeson – The Banshees of Inisherin

Barry Keoghan – The Banshees of Inisherin

Ke Huy Quan – Everything Everywhere All At Once

Kerry Condon: The Banshees of Inisherin

Jamie Lee Curtis: Everything Everywhere All At Once

Daniel Scheinert, Daniel Kwan – Everything Everywhere All at Once

Martin McDonagh – The Banshees of Inisherin

Daniel Scheinert, Daniel Kwan – Everything Everywhere All at Once

Martin McDonagh – The Banshees of Inisherin

Marcel the Shell with Shoes On

Puss in Boots: The Last Wish

All Quiet on the Western Front (Germany)

Carter Burwell – The Banshees of Inisherin

Where the Crawdads Sing – Carolina

House of the Dragon

Only Murders in the Building

Andrew Garfield – Under the Banner of Heaven

Emma D’Arcy – House of the Dragon

Selena Gomez – Only Murders in the Building

Steve Martin – Only Murders in the Building

Martin Short – Only Murders in the Building

Claire Danes – Fleishman Is in Trouble

Daisy Edgar-Jones – Under the Banner of Heaven