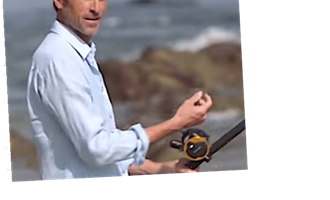 Patrick Dempsey returrned to Grey’s Anatomy for the third time this season on Thursday night.

But he did so under rather dour circumstances.

The latest installment of this ABC drama brought Dempsey back as Derek while the doctors of Grey Sloan Memorial mourned the loss of Andrew DeLuca, who died on last week’s episode.

With Bailey’s seeking answers… and Levi Schmitt recording a video tribute to his late friend… Meredith remained sedated and on a ventilator.

She also ended up on the beach once more, dreaming about her dead husband and having an in-depth conversation with him — about her kids..

“You looked just like Ellis just now, the way you’re looking at your feet, so serious, and she gives that worrying little brow,” Derek told Meredith, brringing up their youngest child, daughter Ellis, who was born after Derek’s passed away.

“This is torture,” Meredith responded, to which Derek said: “It’s a torture of your own devising — you’re always good at that.”

“You never got to meet Ellis. We didn’t even know, I wish you got to know her,” Meredith later told her soulmate.

“She looks just like you,” Derek said of his daughter.

“Hates pink and purple, loves brown and green and gets enraged at the thought of anybody wanting to cut down a tree.”

Sounds like someone has been paying close attention while looking down from above, huh?

Back at the hospital, Webber ultimately realized that everyone there did all they could to save DeLuca.

Bailey, for her part, decided to take some time off from work, asking Richard to step into her place.

At the idyllic beach, meanwhile…

Meredith urged her vision of Derek to come “closer” as Derek went on discussing their children … perhaps foreshadowing that Meredith would be reunited with them in the near future.

“You remember when you were trying to teach Zola how to ride a bike?” Derek asked.

“Well, I was trying not to laugh,” Meredith said, prompting Derek to confusingly repy: “So am I.”

“I can’t do it for you,” he continued. “It’s your beach. Zola is amazing, isn’t she? She’s just so brilliant. She writes me letters in her journal — did you know that?”

From there, as Dr. Hayes looked after Meredith at the hospital, her dream sequence started to merge with reality for the first time.

Hayes begged Meredith to “fight” as he talked about how her kids video chatted her while she has been sedated — and Derek, still on the beach, advised Meredith to “hear him out.”

“I watched my kids lose their mom, you don’t want that for your kids, Grey,” Hayes responded. “There are people getting better here — you could be one of those people.”

Hayes kept trying to motivate Meredith, but we’re guessing it was Derek’s final words that will force her to wake up.