It might have been her second marriage, but it was her first real wedding.

So Gwyneth Paltrow, 46, went all out with a fairytale ceremony as she married her second husband Brad Falcuk, 47.

The actress shared on Goop the first photo of her nuptials, which took place at their home in The Hamptons on September 29.

Showing Gwyneth in her beautiful backless cap-sleeved lace Valentino couture dress with a fitted bodice, the picture was of the newlyweds, as they were showered in confetti after the ceremony.

DailyMailTV was the first to report that Gwyneth wore Valentino for her big day. 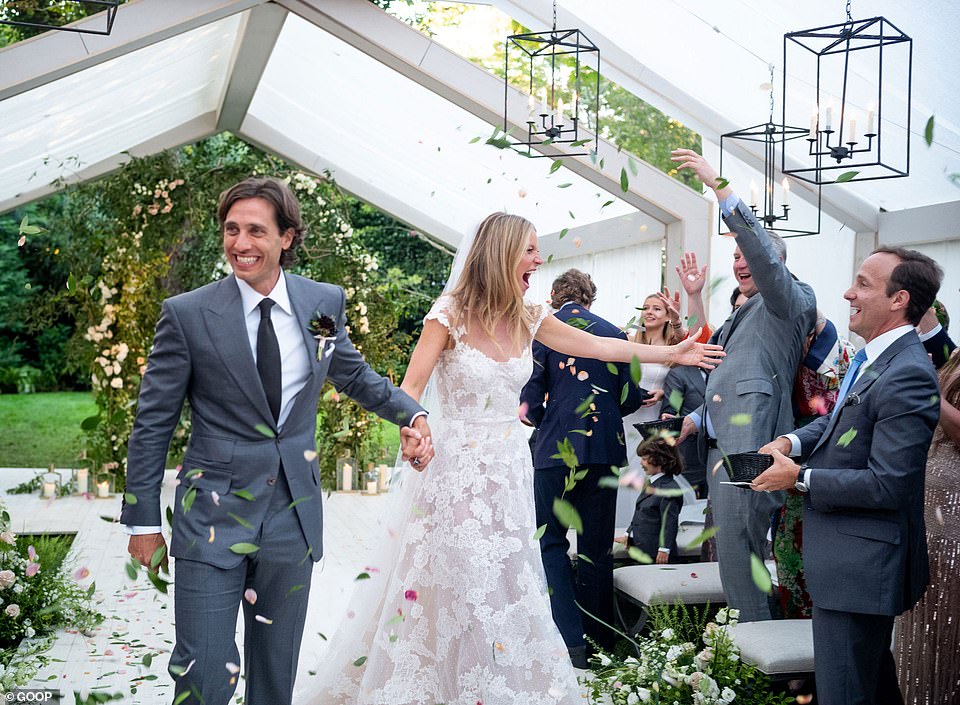 Look glowing like Gwyneth in a wedding dress by Valentino 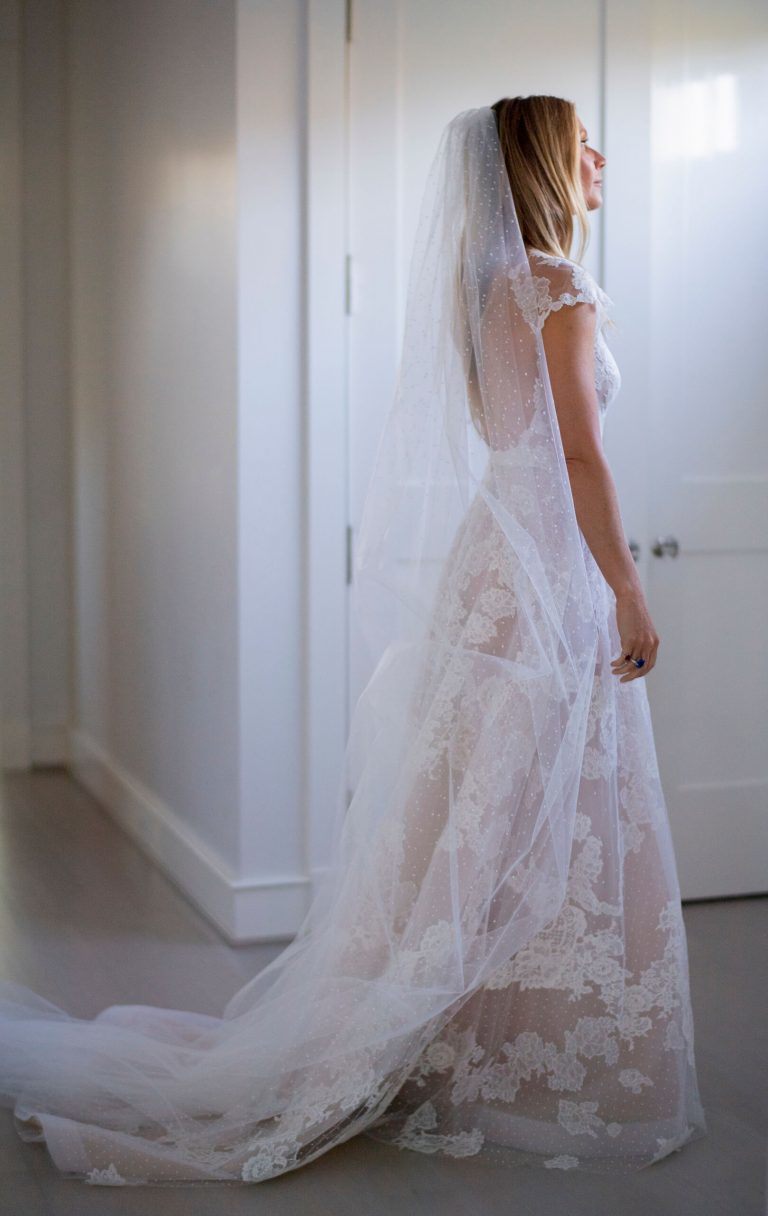 Shop the ready-to-wear line at NET-A-PORTER

Pass the tissues… We've got a serious case of wedding fever.

We're still not over Harry and Meghan's ceremony, then of course it was Princess Eugenie's turn last month. And now we're finally getting a glimpse of the day that Gwyneth Paltrow and Brad Falchuk tied the knot!

The blushing bride looked absolutely beautiful in a dress that was made just for her by Pierpaolo Piccioli, Creative Director at Valentino. We're swooning over the pretty lace fabric, as well as the romantic cap sleeves, sweetheart neckline, and open back. When styled by Elizabeth Saltzman with loosely waved hair and a veil, the new Mrs. Falchuk looked flawless.

So with this lace creation mind, if you're a bride-to-be on the hunt for the perfect dress, start your search with the four options in our edit below. BHLDN and Fame & Partners do the best bridal gowns on the high street, or these Jenny Yoo and Rachel Zoe stunning lace dresses could sub in as a wedding dress in an instant.

A dotted cathedral length veil cascaded down Gwyneth’s back, while her blonde hair was worn in soft beachy waves.

Sharing the image to Instagram, Gwyneth wrote: ‘Took me a minute to get it together, but at long last, for those who have requested, a little look inside the best day of our lives.’

Sharing a further 46 pictures of her big day to her lifestyle magazineGoop, Gwyneth talked fans through her nuptials, which took place in front of just 70 carefully chosen guests. 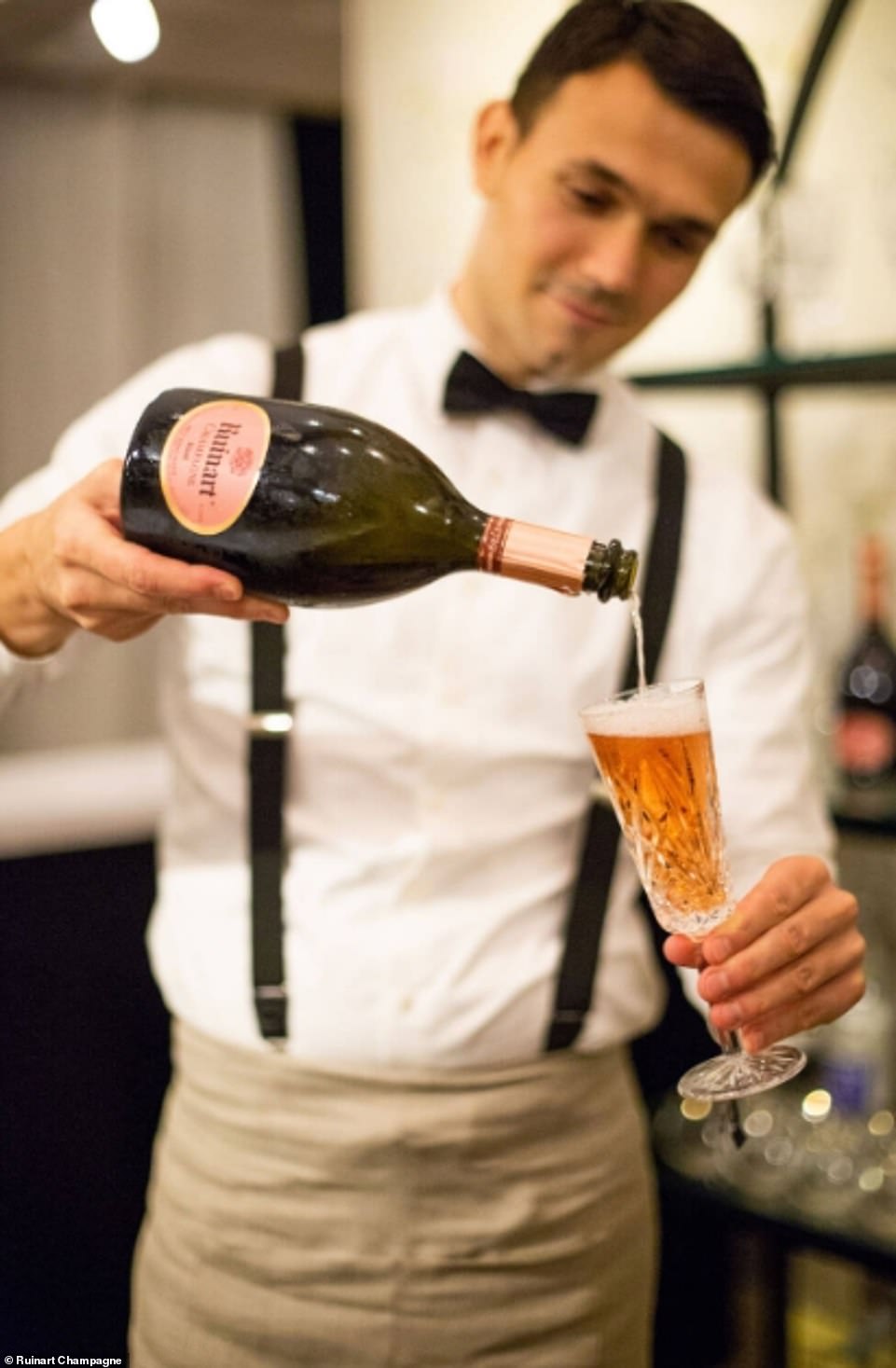 Cheers to the Falchuks! The guests toasted the couple with glasses of Ruinart rose champagne in vintage cut crystal; servers were decked out in Fog Linen

The party started the night before with a rehearsal dinner, held alfresco on wooden tables, set family style, under a canopy of bistro lights.

For the main event, guests started the day catching up by the pool, while makeup artist Gucci Westman and hairstylist Orlando Pita helped Gwyneth get ready. 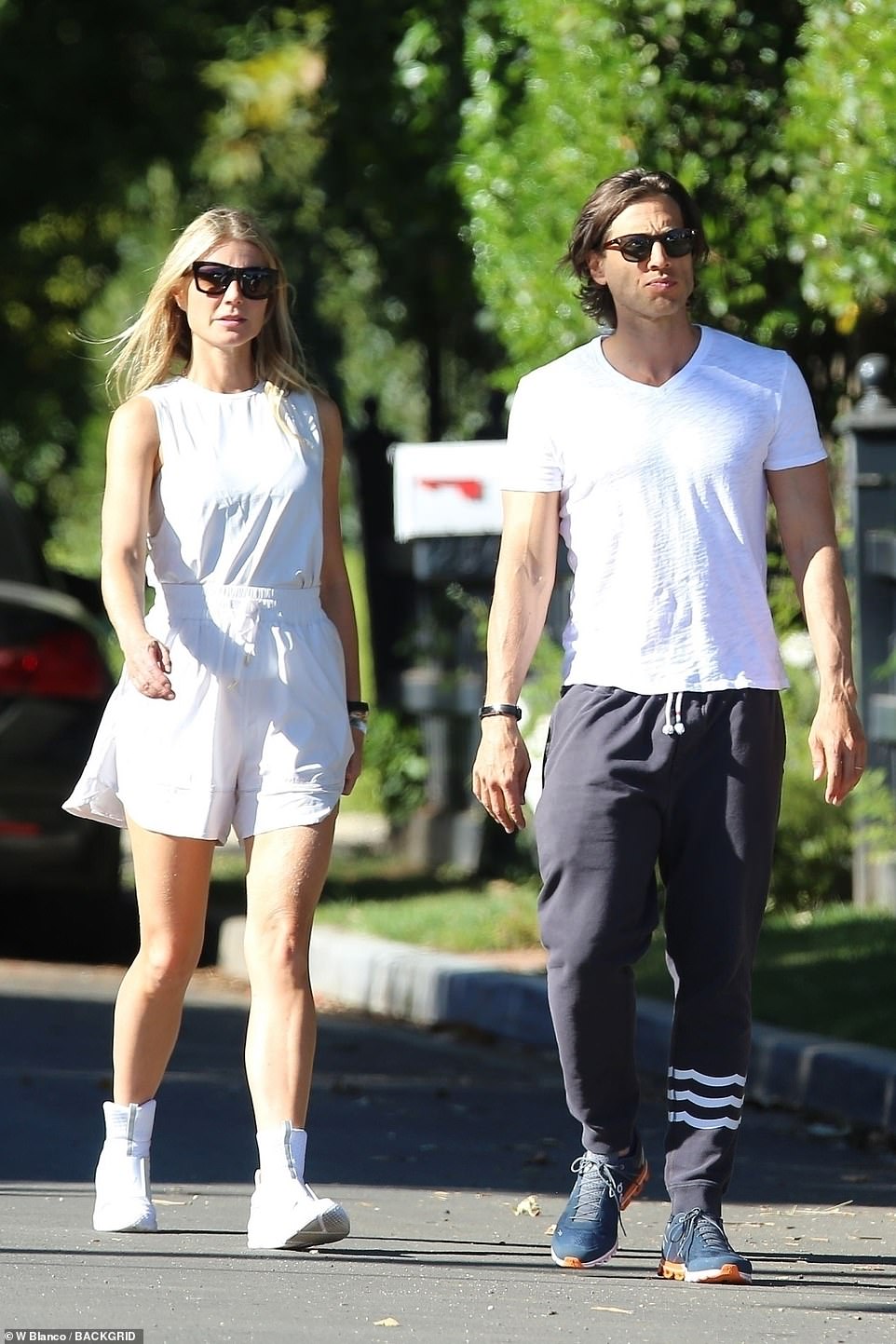 The happy couple: Gwyneth, 46, and Brad, 47, are seen the day after their wedding in The Hamptons 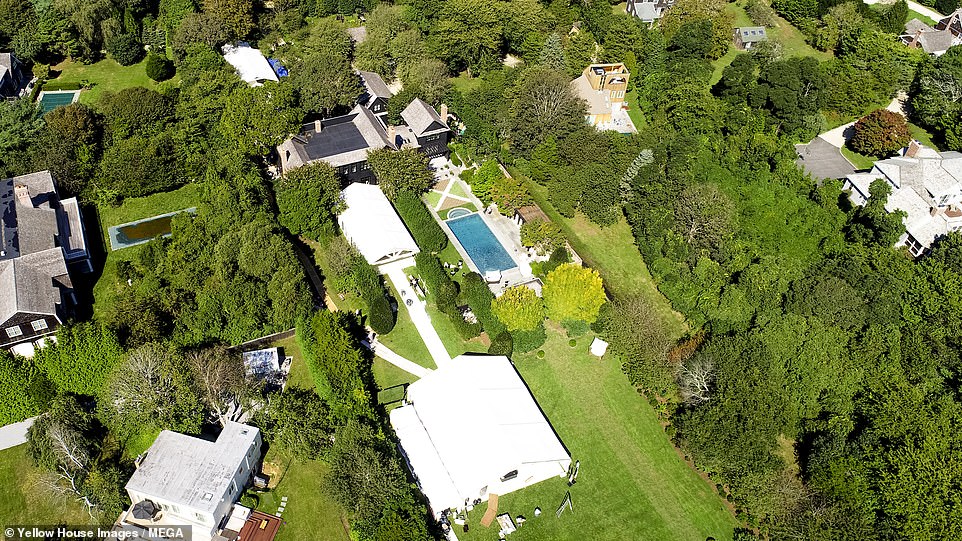 Perfect wedding spot: The Falcuks, as they refer to themselves, wed at their home in Amagansett, in The Hamptons, New York

After the ceremony, the bride and groom were showered in a confetti of leaves and flowers, by their delighted guests.

They then indulged in dirty martinis, before sitting down to a meal by chef Mario Carbone under open canopies.

The guests dined on Dungeness crab and avocado, followed by scampi, then a main course of prime rib or honey mustard duckling with fall vegetables. They finished the meal with a choice of either carrot cake (Gwyneth’s choice) or chocolate and vanilla cake (Brad’s preference).

The small guest list was compiled of school friends of both the bride and groom, a select few celebrity chums and family, including Gwyneth’s actress mother Blythe Danner, and the couple’s four children. 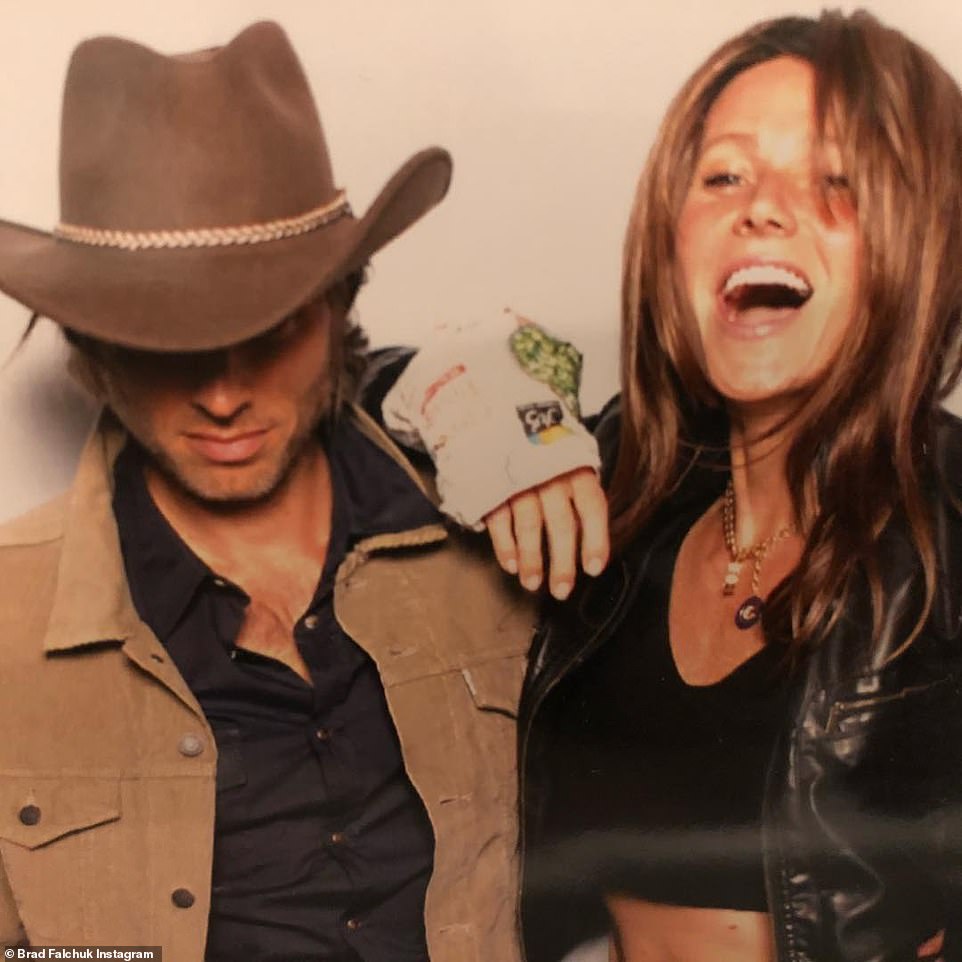 Enjoying married life: The two are seen on Halloween, after a month of marriage, dressed as Bradley Cooper and Lady Gaga’s characters Jackson Maine and Ally in A Star Is Born

After dinner Gwyneth changed into a short flirty white jumpsuit by Stella McCartney, also the choice of royal bride Meghan Markle for her reception gown. They then ended the night with a disco, dancing to ’80s party jams.

The Oscar-winning actress and the Assassination Of Gianni Versace producer have been together for four years but were engaged for one year before they wed.

Gwyneth was previously married for ten years to Coldplay rocker Chris Martin, with whom she co-parents her two children.

The marriage is also a second one for Brad, who was previously wed to television producer Suzanne Bukinik Falchuk, the mother of his two children. 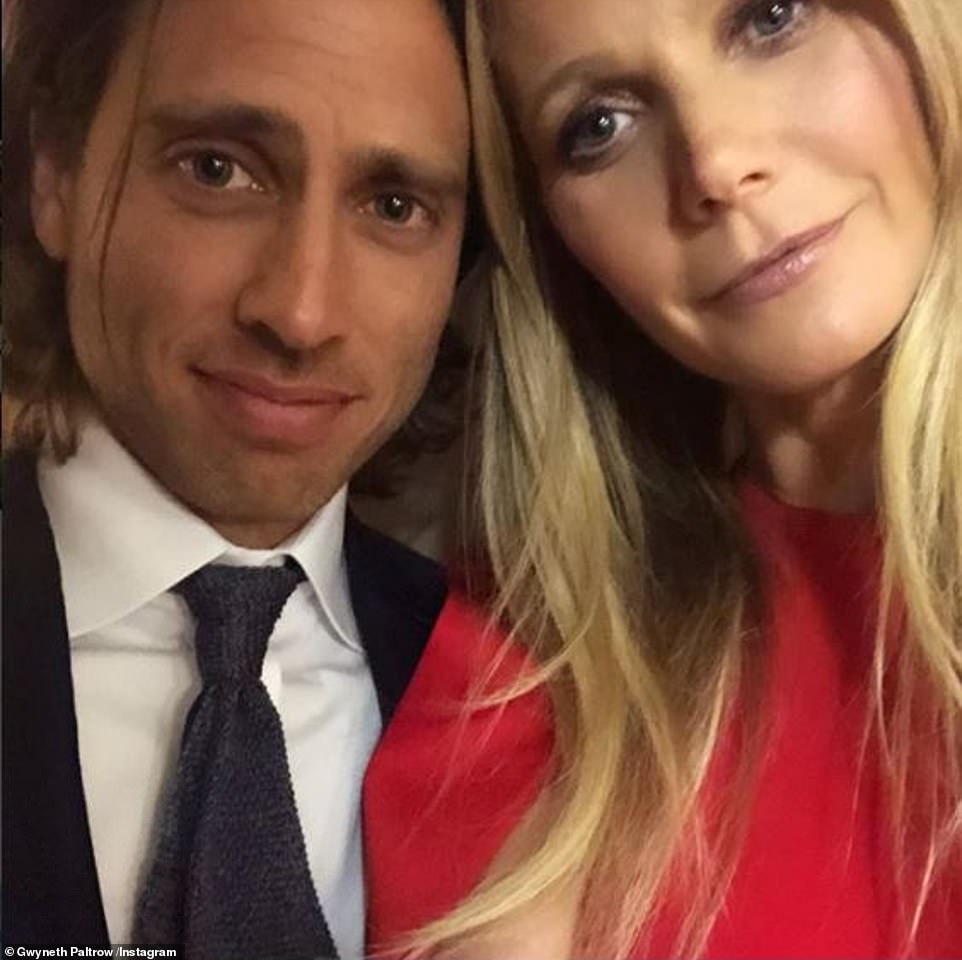 Married: The Oscar-winning actress, 46, and the Assassination Of Gianni Versace producer, 47, have been together for four years but were engaged for one year before they wed; they are seen on Valentine’s Day