Is it a honeymoon or just a holiday? Hailey Baldwin flashes her HUGE diamond ring as she snuggles up to Justin Bieber on London Eye amid wedding rumours… before singer busks outside Buckingham Palace

So it’s no wonder they were the names on everyone’s lips when the couple enjoyed their honeymoon — or a holiday — in London amid claims they have tied the knot.

The Sorry hitmaker wrapped his arms securely around the waist of his sweetheart and nuzzled her neck as they queued for the London Eye on Tuesday before the singer went onto busk outside of Buckingham Palace. 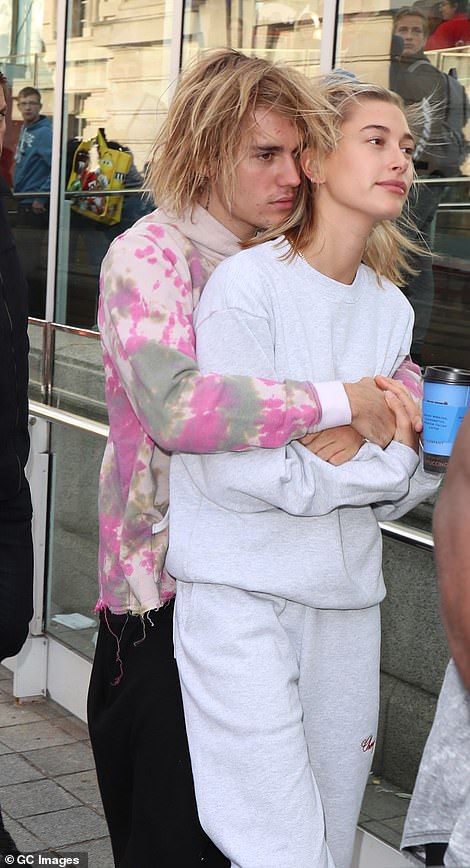 Is it a honeymoon or just a holiday? Hailey Baldwin flashed her HUGE diamond ring as she snuggled up to Justin Bieber on London Eye on Tuesday

Justin, who has a estimated net worth of $265 million, put on a royally good performance as he strummed on his guitar when he perched on the edge of the water feature outside the Monarch’s home.

Purpose, the name of his fourth album, was inscribed on the musical instrument as well as his initials JB and symbols of a diamond, a cross, a star and a jester.

The diamond could signify Justin’s choice to propose to his girlfriend earlier this year in July, just a month after the couple had rekindled the flames of their romance in June.

Very outspoken about his spiritual side and love of church, it is no surprise that Justin also had a striped cross emblazoned across his guitar. 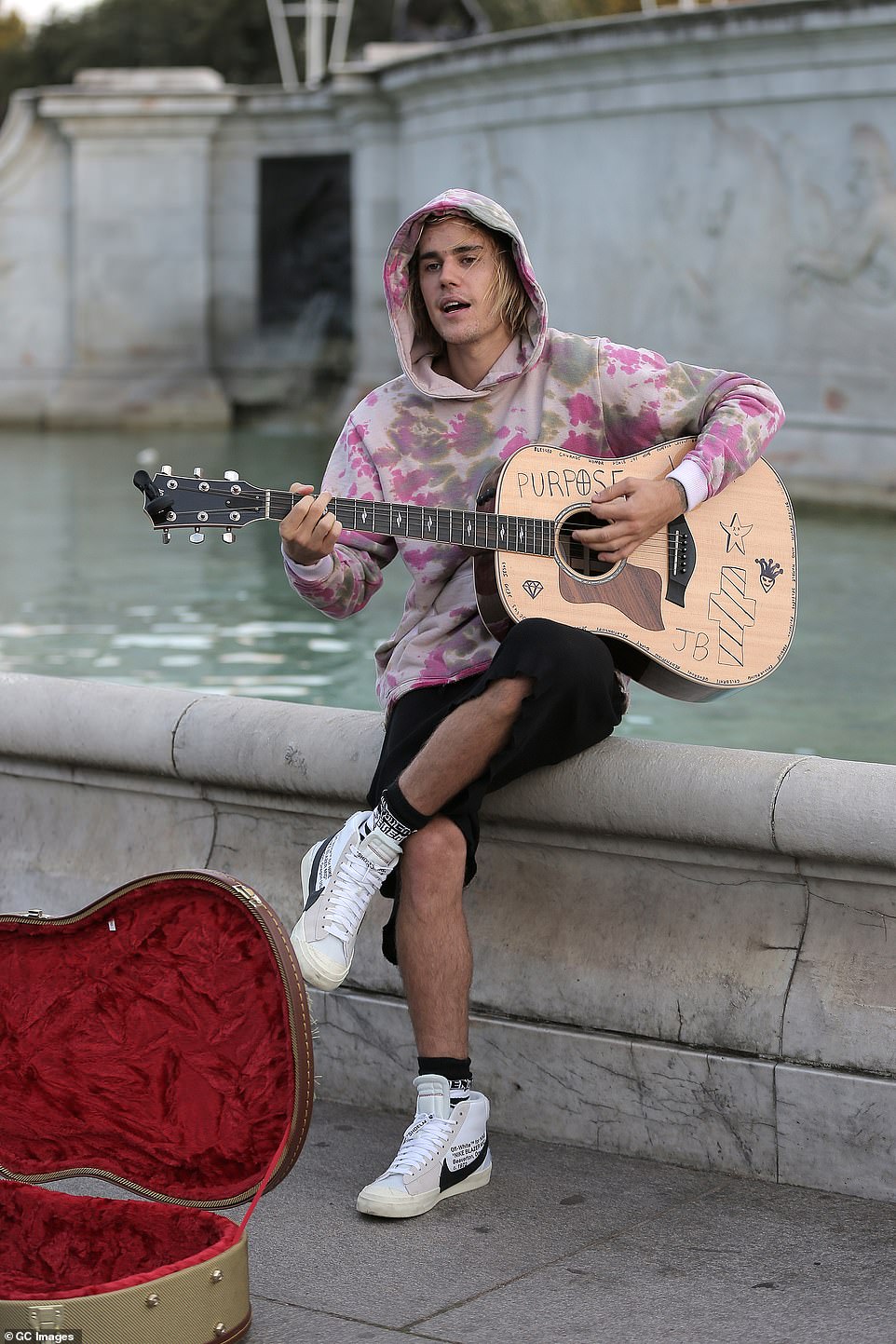 Incredible: Justin, who has a estimated net worth of $265 million, put on a royally good performance as he strummed on his guitar when he perched on the edge of the water feature outside the Monarch’s home 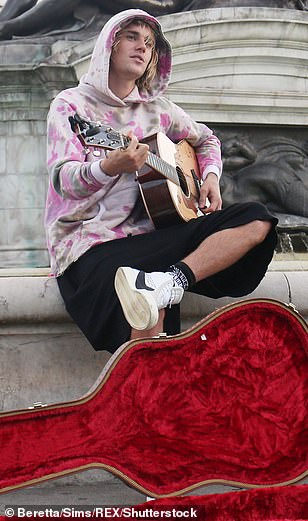 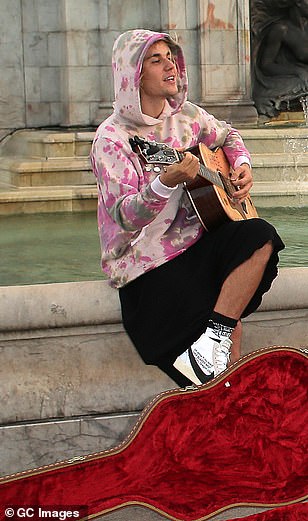 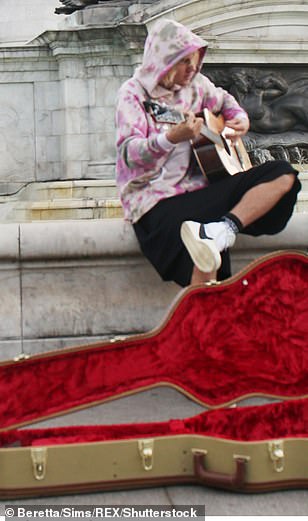 Significance: Purpose, the name of his fourth album, was inscribed on the musical instrument as well as his initials and symbols of a diamond, a cross, a star and a jester 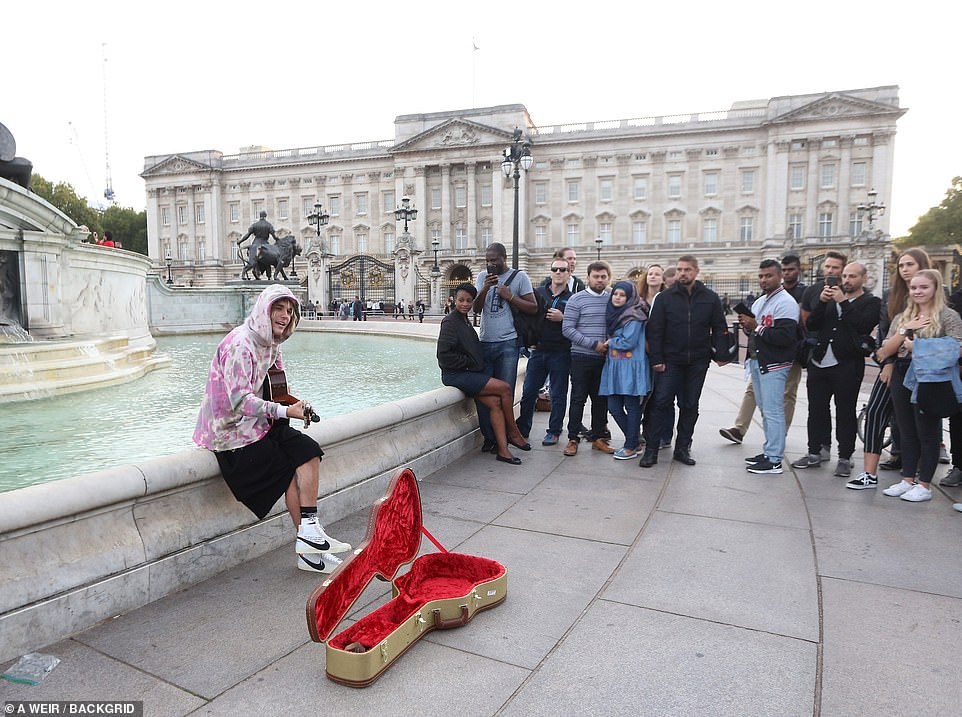 Wow: Londoners flocked to the water feature where Justin was playing to listen to the singing superstar put on an emotional performance outside of the Monarch’s home

Hailey stood out from the bustling crowd of native Londoners as her oval ring on her wedding finger glittered in the light, fueling rumours she had married Justin.

Clad in grey sweatpants and a loose-fitted jumper, a besotted Hailey gave her beloved adoring glances as they walked together.

Intense passion consumed the showbiz couple as they shared a heated kiss while they waited for their turn on the tourist attraction, not worried about prying eyes. 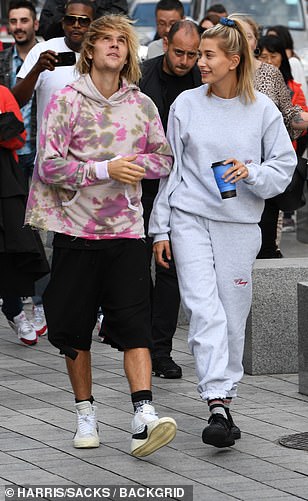 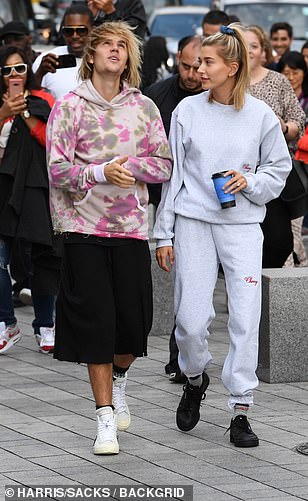 Must be love: Clad in grey sweatpants and a loose-fitted jumper, a besotted Hailey gave her beloved adoring glances as they walked together 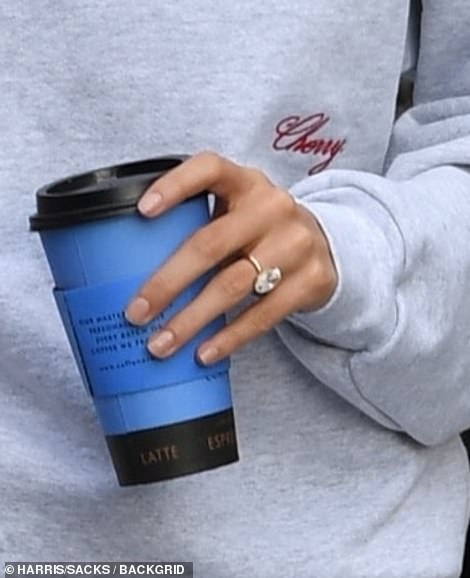 Some-ring to show off! Hailey stood out from the bustling crowd of native Londoners as her oval ring on her wedding finger glittered in the light, fueling rumours she had married Justin

Seemingly unfazed by onlookers, the smitten showbiz pair packed on the PDA behind the glass partition.

Over the past few days, there have been reports — and subsequent denials — over whether or not she tied the knot with her beau Justin last week.

And while Hailey has yet to confirm whether the reports are true, the 21-year-old model shared with Glamour magazine how their romance has left her with love ‘pouring out of her soul’.

Speaking to the publication during the current London Fashion Week, the blonde beauty said of her radiant appearance: ‘I go home, and my Mom says, “You are just so peaceful, I don’t think I have ever seen you this peaceful.”‘

Explaining her demeanour to interviewer Josh Newis-Smith, she exclaimed: ‘It’s from the inside out — I am in love! That’s what happens. It’s pouring out of my soul — life is awesome!

‘I should just bottle it. Like sprinkle it like a fairy – I wish I had dust — The Hailey Dust! It would be a highlighter product, let’s be honest.’

Packing on the PDA: Intense passion consumed the showbiz couple as they shared a heated kiss while they waited for their turn on the tourist attraction, not worried about prying eyes 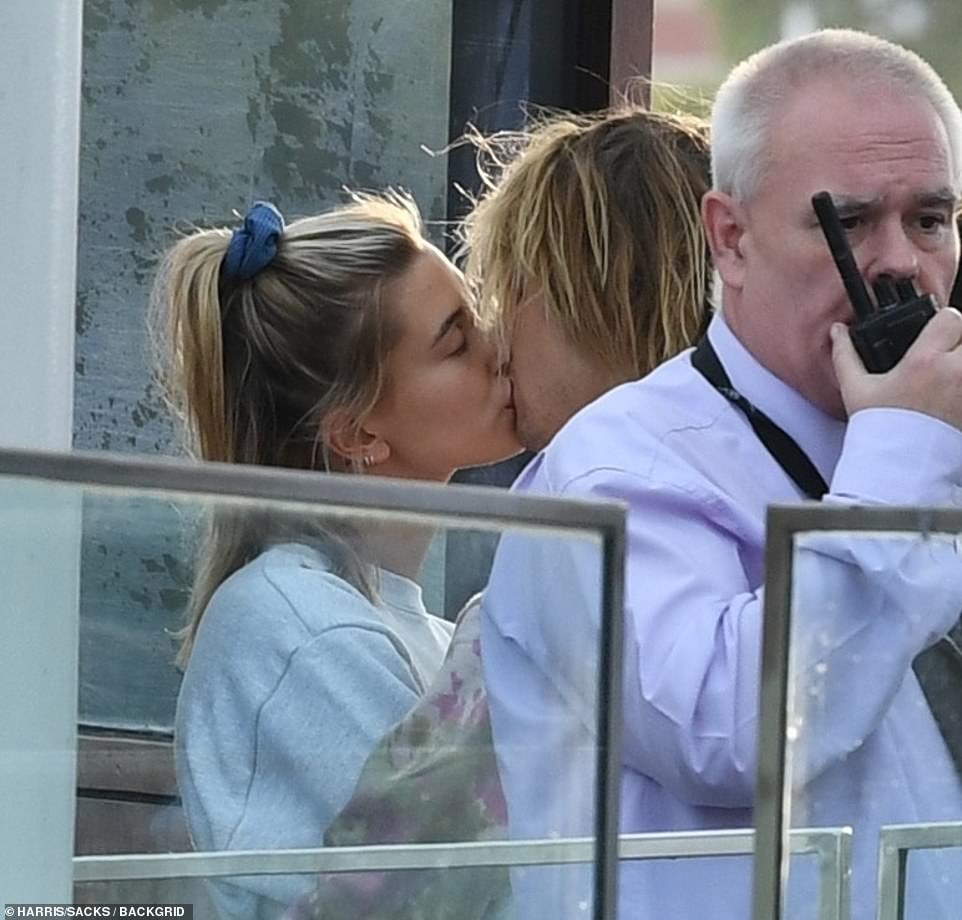 Can’t get enough: The pair shared a heartfelt moment together as if they were the only two people in the world, without the prying eyes of London surrounding them

The 60-year-old screen star, speaking with Access during entrances at the 70th Primetime Emmy Awards, said that the model and singer have exchanged vows.

‘They just went off and got married and I don’t know what the deal is,’ Alec said about three days after Hailey, 21, and Justin, 24, were spotted at the Marriage Bureau at a courthouse in New York City last Thursday.

But the next day sources told TMZ that it’s not true and the couple have yet to officially marry, though they have obtained a marriage license.

Alec made the comment at the awards ceremony after Hailey took to Instagram on Friday to deny she and Justin had married.

The model wrote: ‘I understand where the speculation is coming from, but I’m not married yet!’ 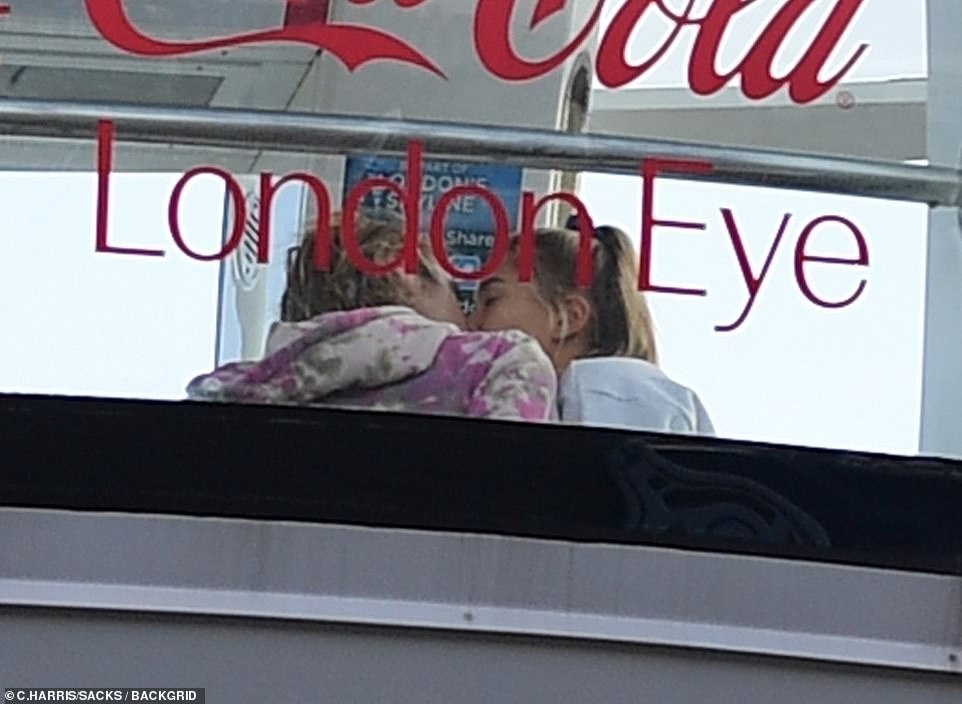 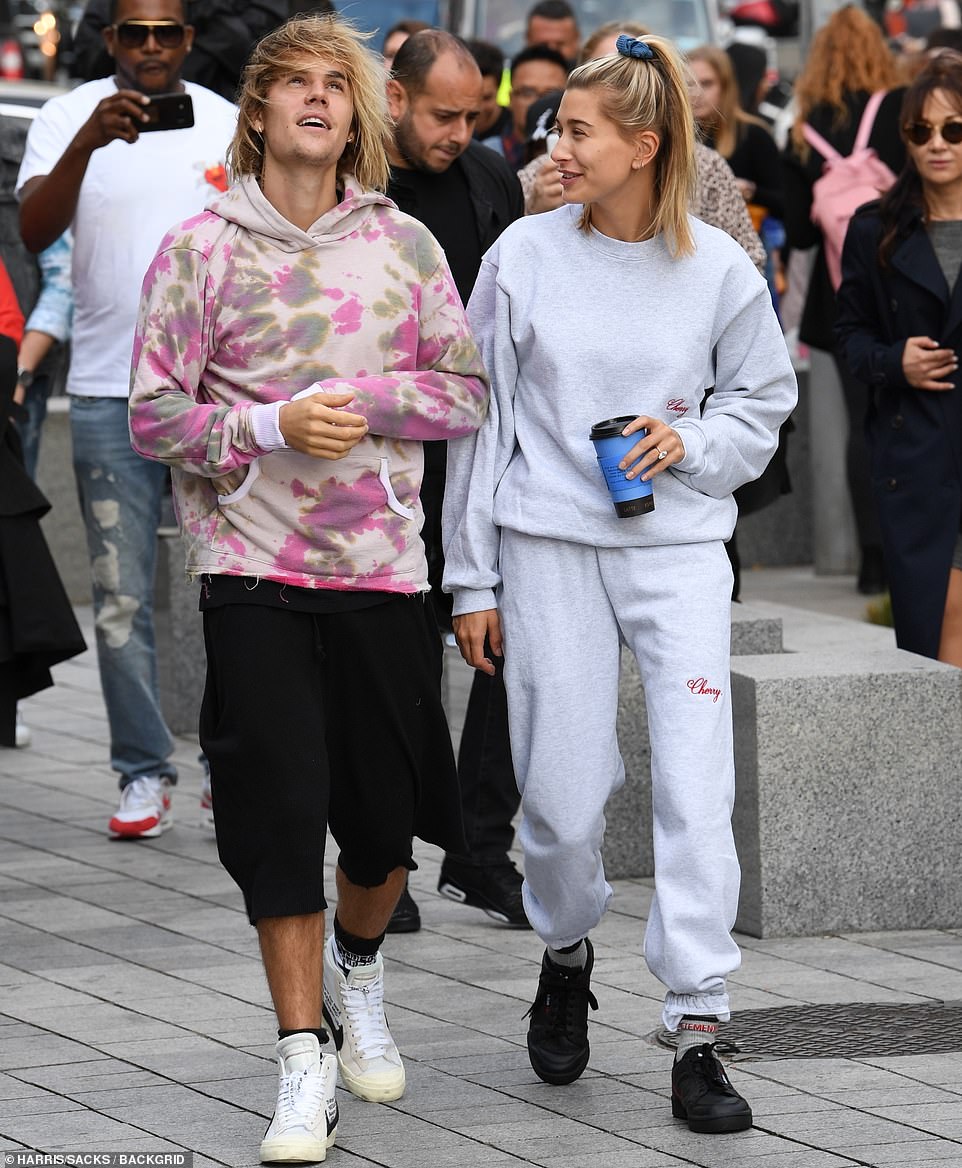 An insider told People last week of Hailey and Justin’s marriage: ‘They went ahead and did it without listening to anyone,’ noting that future festivities are planned to celebrate the union.

‘They’re going to have a big blowout, in front of God and everyone they love.’

It is now rumoured that the couple, who started dating in June, will have a big ceremony in Canada next week. 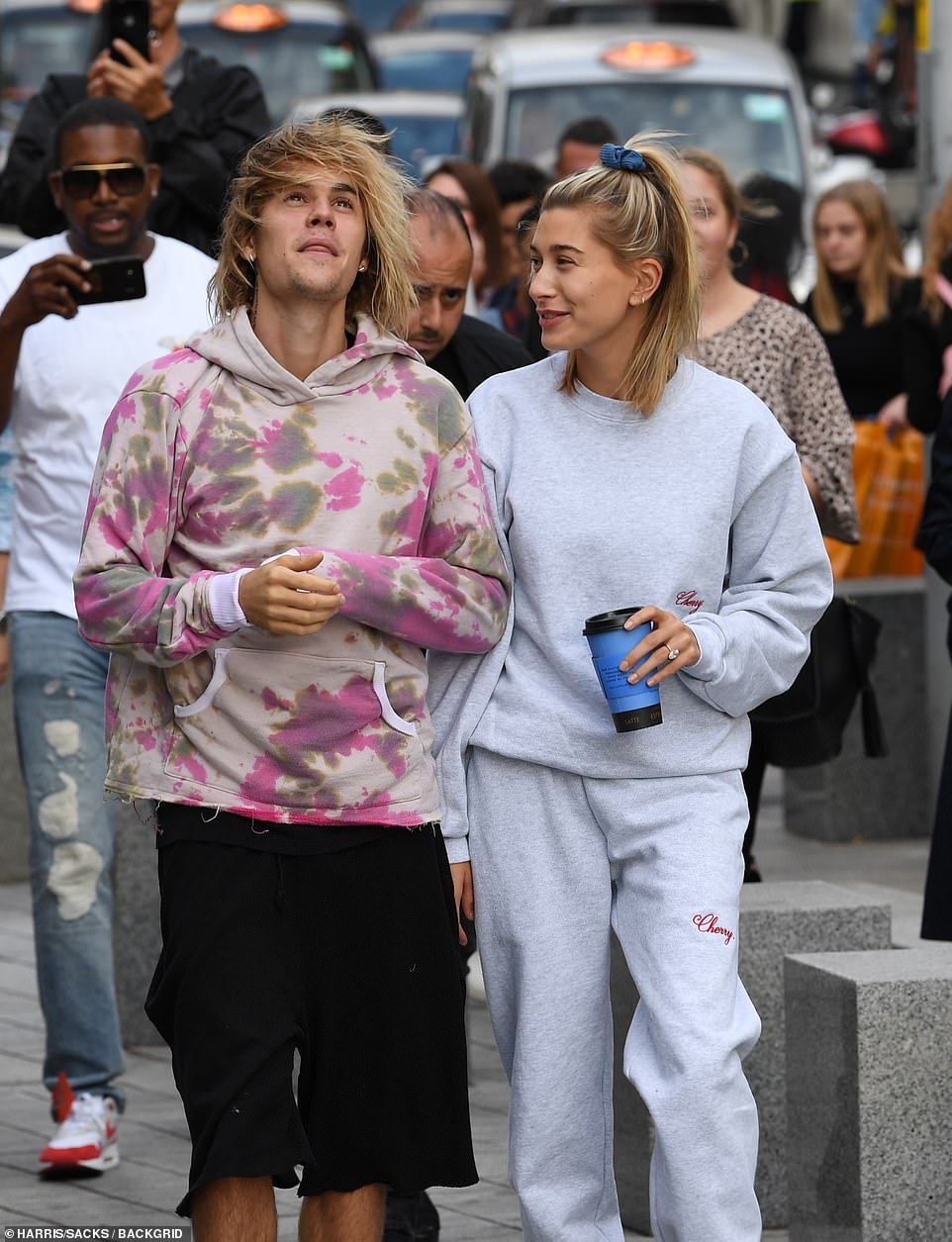 Despite Hailey’s denial that they are already wed, People claims via sources connected to the couple, that it’s simply the case that the Tommy Hilfiger model doesn’t consider herself officially married yet.

A source said Hailey ‘feels a civil ceremony and their ‘real’ wedding are two separate things.’

TMZ claims they will throw their wedding bash at the $5m mansion in Ontario, Canada he purchased this summer. It has four-bedrooms featuring a private equestrian facility with stables and a 5/8 mile race track. 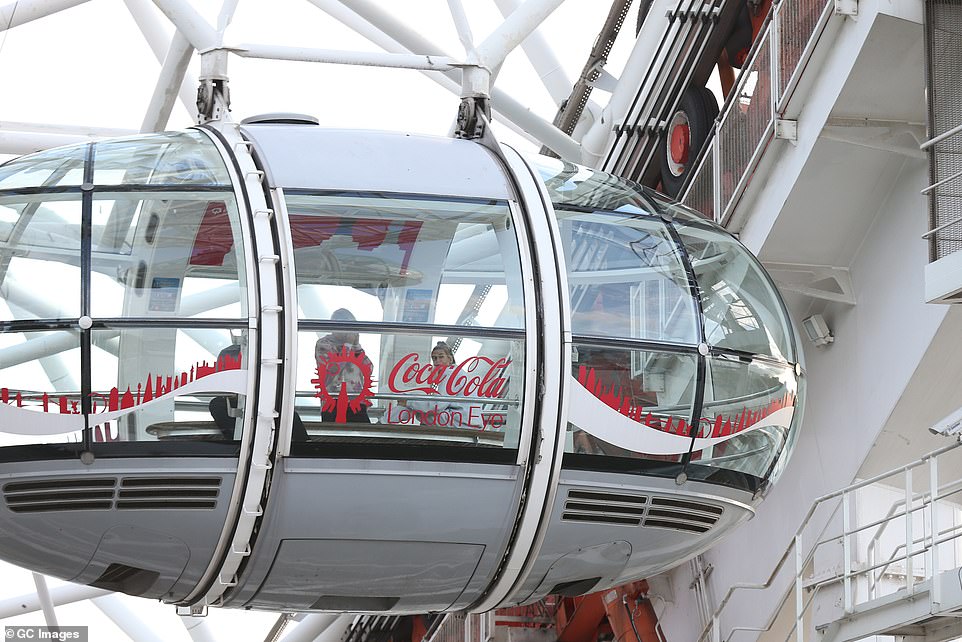 A source added to the site that last month they had pushed their wedding to 2019 but they later had a ‘change of heart’ and want to marry in mid September.

TMZ also said Justin was ’emotional’ when he got his marriage license.

The Sorry singer was overheard saying in the court house through tears, ‘I can’t wait to marry you, baby.’ 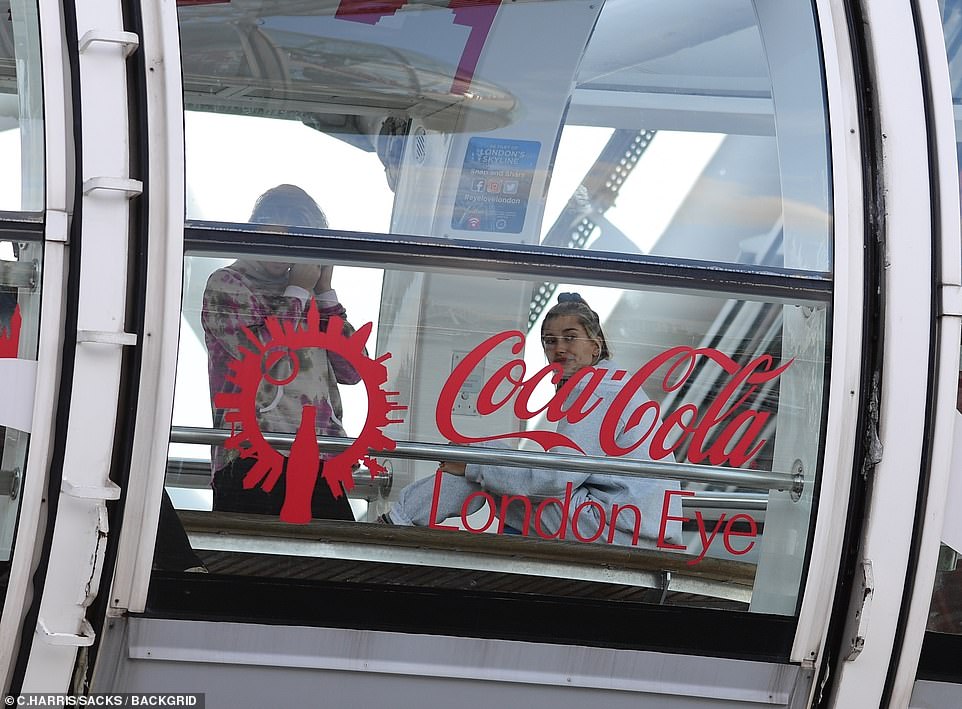 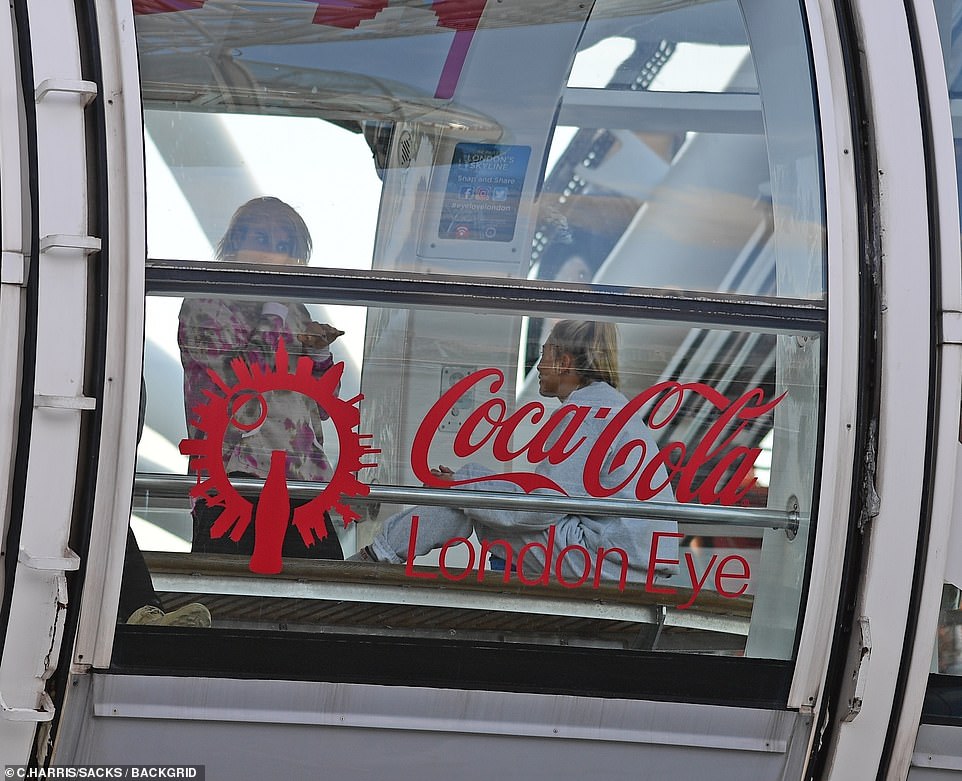 It was added by a source: ‘Justin said to a court official, “Thanks for keeping it on the DL.”‘

According to New York State requirements a marriage license ‘is valid for 60 calendar days, beginning the day after it is issued.’

Meanwhile, the What Do You Mean artist has reportedly applied for dual citizenship in the U.S and Canada ahead of his wedding. Academy Award nominee Alec, who was flanked by his stunning wife Hilaria at the award show, said that they ‘text Hailey every now and then,’ and ‘met [Bieber] one time.’

Baldwin, who appeared onstage at the show during a Betty White tribute, had words of relationship advice for Bieber in his purported new marriage with Hailey.

‘Keep working … don’t stop working,’ he said. ‘But when you get married, you know I mean I think it works best if you can really be together.’ 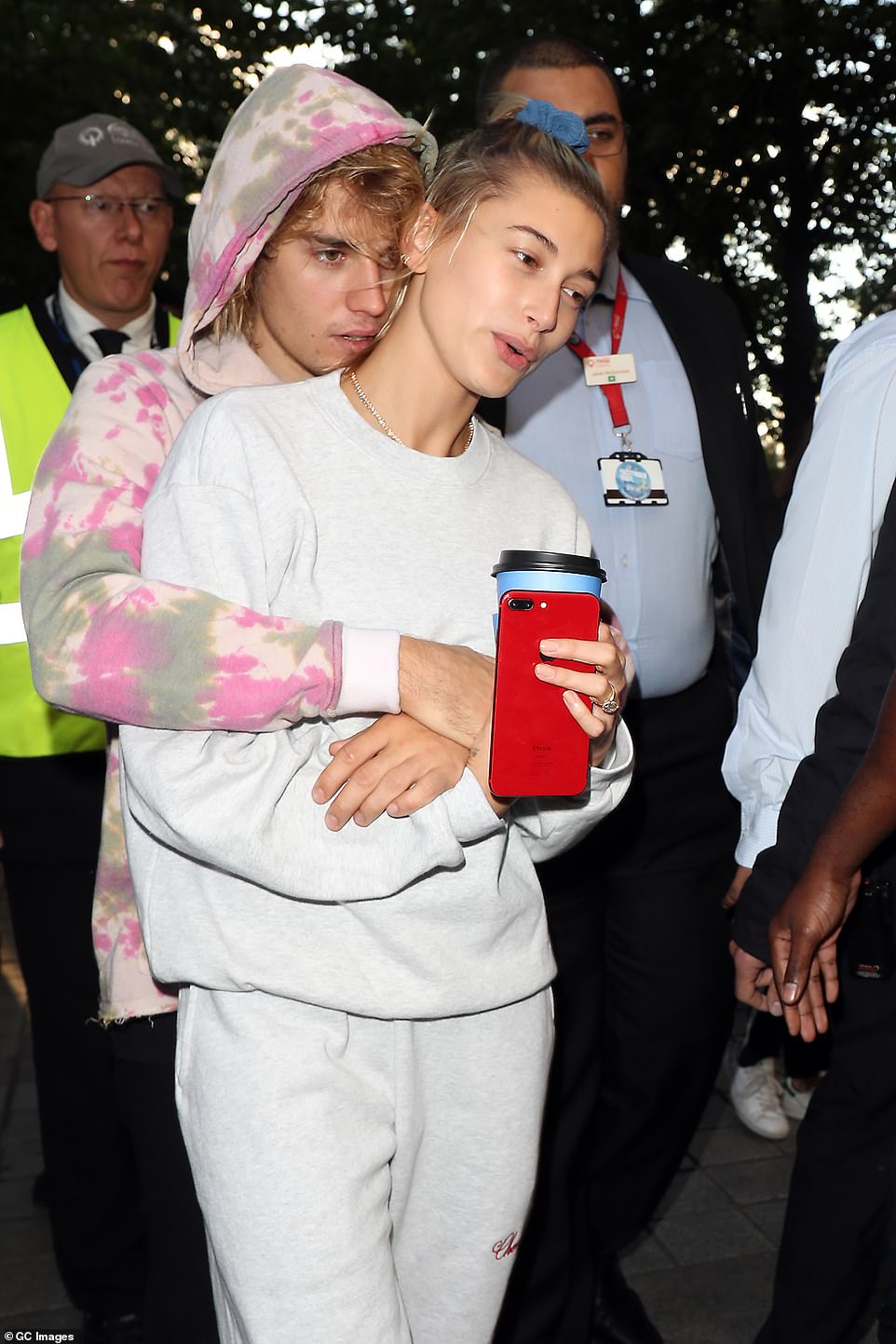 He explained how he and wife work to make sure they’re spending plenty of time with one another.

‘You hook your schedules up where you can really be with each other cause we make all of our decisions around staying home,’ he said.

‘There’s jobs that I could do, and there’s things that she could do, that we don’t do because it means going away for five weeks. We don’t do that.’ 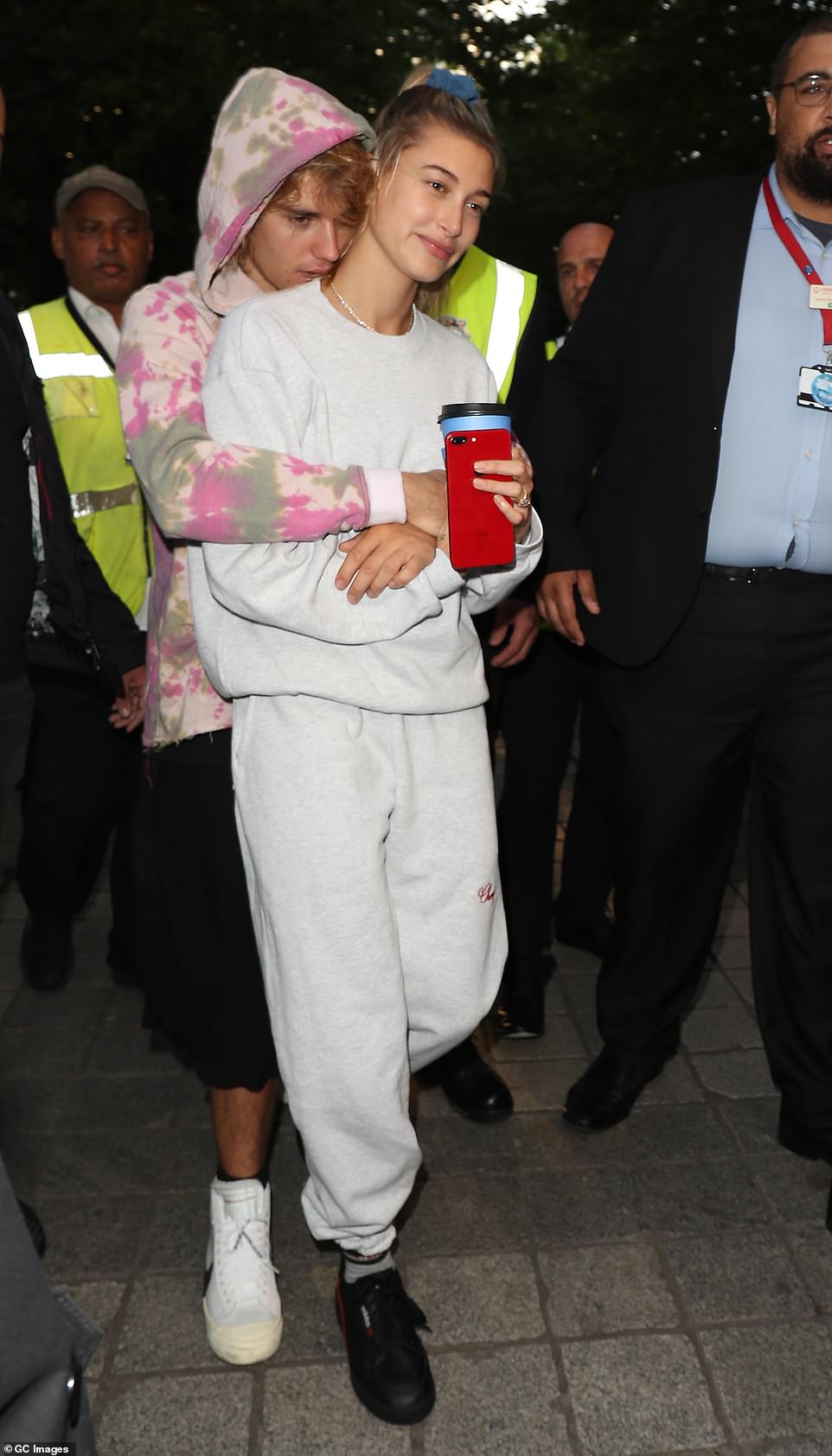 Alec, who won an Emmy last fall for his Saturday Night Live impression of President Donald Trump, said he wasn’t going to assume a protective role over Hailey toward Bieber, in their new nuptials.

‘That’s not my job: She has a dad and I’m sure he has a few paragraphs about that himself, so I’m not worried,’ he said.

Justin and Hailey – who got engaged on July 7 – previously dated off/on in 2015 and 2016, but they’ve been inseparable ever since June. 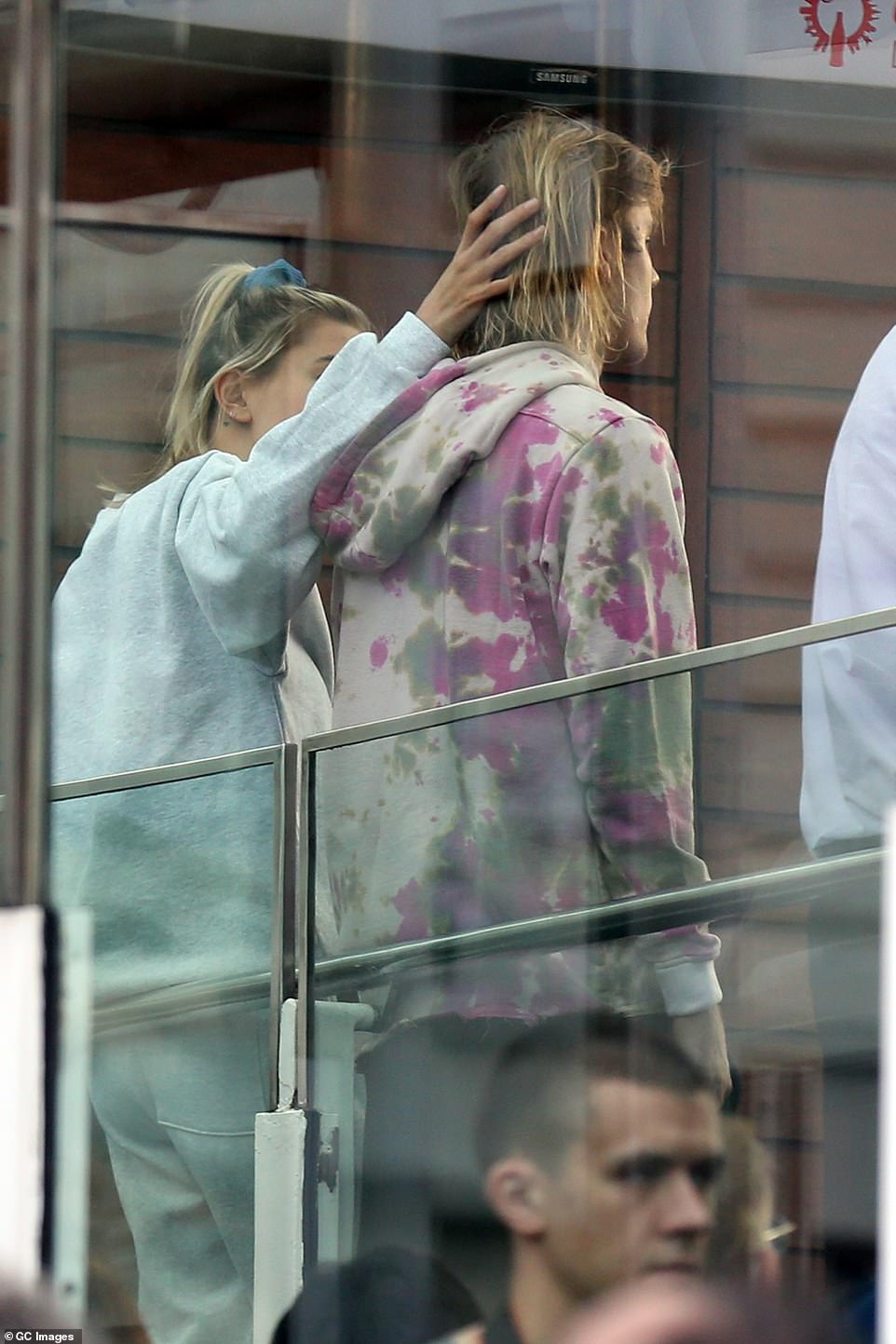 Eyebrows raised at the Hillsong Church duo (who first met in 2009) considering Justin only split from his on/off girlfriend since 2010, pop diva Selena Gomez, six months ago.

Now that the two are reportedly married, they will likely settle down.

‘Justin wants to make his full-time home in Canada,’ a source told Us Weekly on Wednesday.

‘He needs to get out of the L.A., NYC scene. He’s trying to climatize what a normal life should look like. He feels most at peace at home.’ 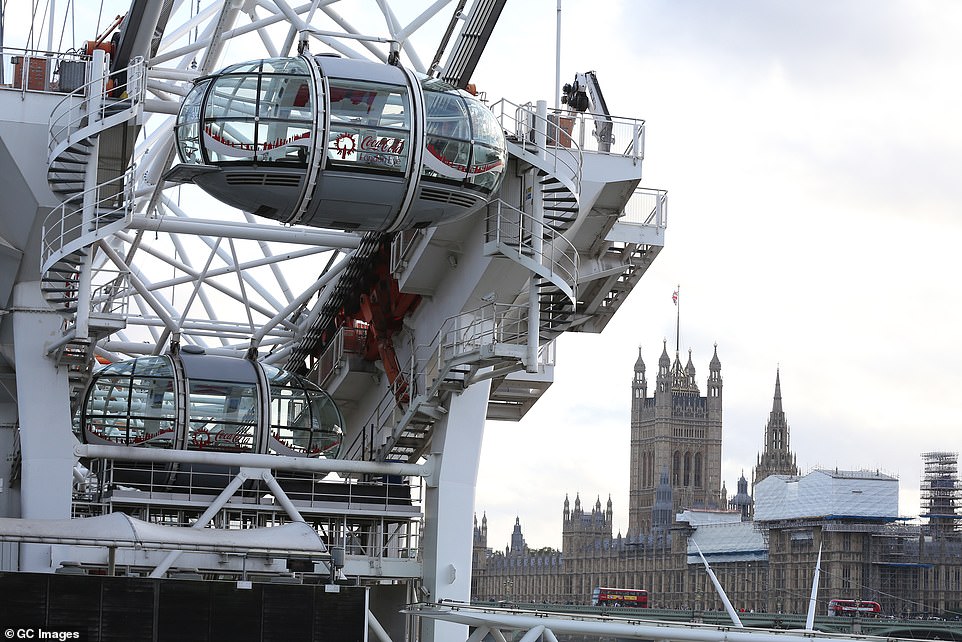