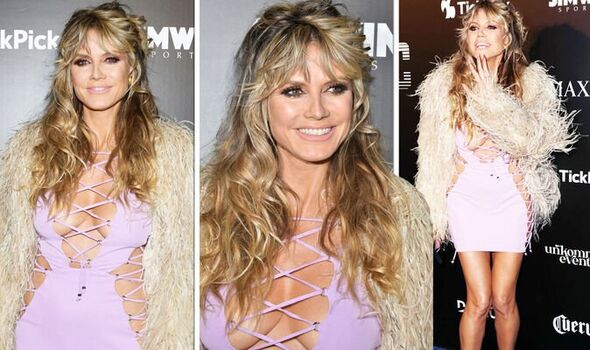 Heidi Klum put on a jaw-dropping display at an event in Los Angeles.

Heidi Klum left little to the imagination as the beauty flashed her cleavage in a daring lilac mini dress. The model made a bold statement as she was accompanied by her husband Tom Kaulitz, 32, at DIRECTV Presents Maxim Electric Nights at City Market in Los Angeles, on Saturday.

Heidi ensured that all eyes were on her as the blonde beauty hit the red carpet in a risqué outfit.

The mum-of-four posed confidently in her skin-baring purple mini dress, which boasted a plunging neckline and cut-out sides.

The Victoria Secret’s model put on an eye-popping as she gave a glimpse of her assets in the candid pictures.

Heidi flashed her legs which she teamed with a pair of clear heels that featured a pink hue.

Keeping warm, she layered up with a shaggy beige hip-length jacket and carried her essentials in a shiny burgundy clutch.

The age-defying beauty rocked heavy make-up with deep eye shadow, pink blush to accentuate her cheekbones and a matching lip.

Posing for pictures alongside her husband, Heidi was all smiles at the star-studded event.

Heidi Klum was all smiles as she posed for pictures

Heidi Klum left very little to the imagination as she posed for pictures.

Heidi Klum gave a glimpse of assets as her cleavage almost spilled out the cut-out dress.

Heidi Klum made a bold statement in a daring dress

Heidi Klum elongated her long legs with a pair of towering stilettos.