On Thursday, Sept. 19, Apple released its iOS 13 update. With this huge update came the ability to customize your own Memoji Stickers to use directly in your iMessage app. Since then, users who don’t have iOS 13 or use an iPhone at all wondered if they can use the cute Memojis with other applications. Thankfully, the answer is yes. Wanna send Snaps with the cute little guys? Here’s how to use Memoji Stickers on Snapchat for both iOS and Android devices.

Basically, it’s going to be easier to use Memoji stickers if you’ve got iOS 13 on your iPhone. But, that doesn’t mean that it’s impossible for others to find a way to use these adorable personalized stickers in their social media platforms, too. It just means it’s a little more work.

If you do have the iOS 13 update and want to use your Memoji stickers on Instagram, that works the same way as sending a Memoji in your iMessage. You access it by clicking on the text field, then selecting the emoji sticker icon, and then scroll to select a Memoji. Unfortunately, non-iOS users are unable to use them in the same way on the ‘Gram.

What about users who are wondering how to use their Memoji stickers in Snapchat, though? Well, it’s not a difficult task, even if you have an Android.

Unfortunately, if you have an iPhone but don’t have iOS 13, you’re going to be out of luck for using Memoji stickers in Snapchat. But if you do have the iOS 13 upgrade on your iPhone, here’s how to do it.

What about using Memoji stickers in Snapchat Story? Well, the only way to do that with iOS 13 is to use the Memoji as an image. In other words, you can’t take a photo and then place a Memoji sticker over the top of it like you can do in your Instagram Stories. But, you can post a saved Memoji screenshot in your Snapchat Story as a photo and put text with it to describe a real #mood. Of course, Snapchat already has Bitmoji, which functions in a similar way, so that’s likely why you can’t add in Memoji as easily as you can in Instagram Stories.

So, although Android systems don’t operate on Apple phones, you can technically use Memoji stickers. The caveat here is having a friend with an iPhone either send you some Animojis and Memojis to use, or you can borrow a friend’s iPhone to create your own, and then send your Memoji to your Android phone in a message or WhatsApp. You can go the route of using WhatsApp to get it to your Snapchat if you want, but TBH that’s not necessary unless you want to save them to your WhatsApp stickers as well.

Make sure you have created your Memoji using a friend’s or family member’s iPhone.

Send the Memoji to your Android phone via text message or WhatsApp. 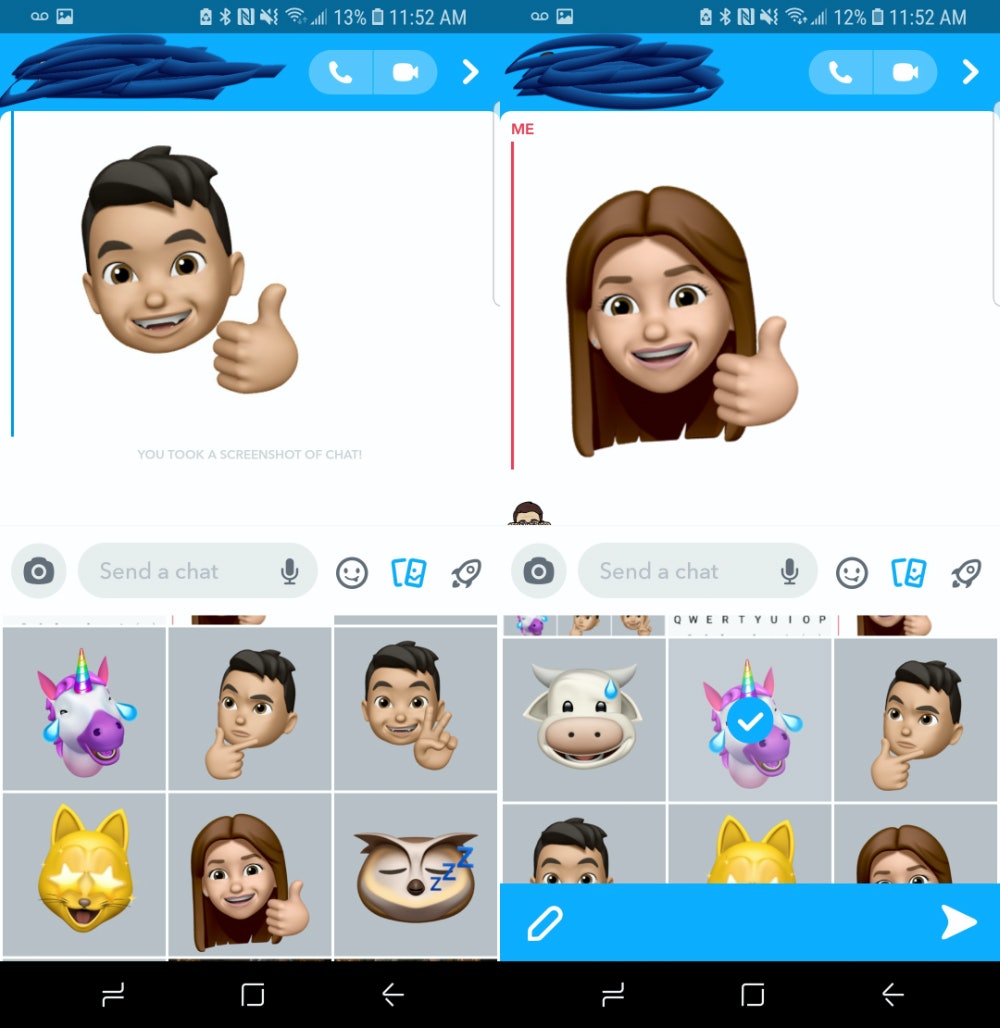 While it is a tiny bit more work to use your Memoji stickers in Snapchat if you have an Android phone, it is possible.

Unfortunately, the social media game seems to be aimed at iPhone users more than Android users these days. It isn’t the case for everything, but it def seems to be a pattern right now. For instance, Snapchat’s new 3D Camera Mode is only available for iPhone X or newer, so older iPhone owners and Android users will have to wait until the Face ID tech becomes a typical phone feature across all mobiles.

TBH, all of this is enough to make me want to upgrade to a new iPhone 11, 11 Pro, or 11 Pro Max. But, just because you don’t have the latest in tech doesn’t mean you can’t find a way to have some similar fun.

So, Android users, don’t fret. You can use Memoji stickers in Snapchat, too. Get ready for all the cry-laughing and heart-eyes avatars you can handle.