Despite their split earlier in 2022, when it comes to special occasions, Hoda Kotb isn’t letting her relationship status with Joel Schiffman get in the way of honoring him.

MORE: Hoda Kotb called out by co-star over peculiar habit after on-air surprise

In light of Father’s Day, the star took to Instagram to share a sweet post dedicated to Joel, who she still shares daughters Hope Catherine and Haley Joy with.

The Today star and the financier dated for nearly a decade. She announced the split in late January with an emotional statement on 3rd Hour with Hoda and Jenna. They had been engaged since November 2019.

The adorable photo sees Joel posing alongside Hope and Haley, as the three of them smile ear to ear while doing some sort of arts and crafts activity.

The mom-of-two captioned the photo simply with “Happy Father’s Day,” but that didn’t stop fans from gushing over – and commending her – for the adorable post.

Fans inundated her comment section with compliments, writing: “Happy Father’s Day. Beautiful photo,” and: “Girl dads!” as well as: “Such a beautiful family!” 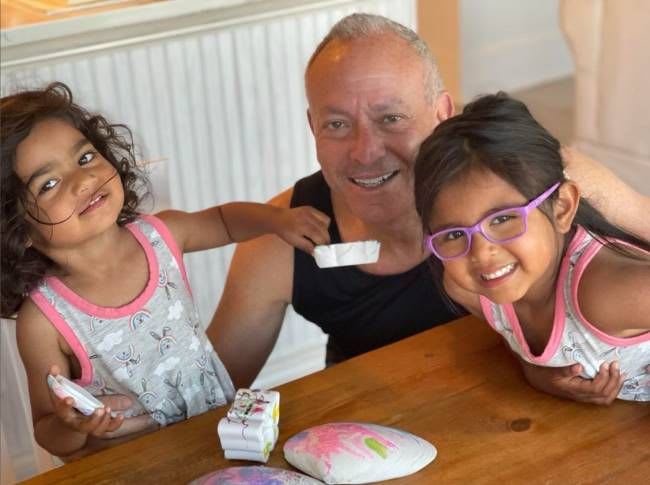 The adorable photo with Hope and Haley

Joel undoubtedly still holds a special place in Hoda’s heart, and the two are committed to co-parenting. She recently opened up to her co-star Jenna Bush Hager about the meaning behind her two girls’ names, how she chose them, and even revealed how the 64-year-old himself influenced the names.

MORE: Hoda Kotb returns to social media after absence – and her family photo is the sweetest

With Haley, she explained: “She seemed so one in a million,” which made her think of Halley’s Comet, one of the most iconic space phenomena in the world, which occurs once every 75 years. Her middle name was her sister’s suggestion, an idea that came easily to her when Hoda would tell her what a “joy” her new baby was.

A post shared by TODAY with Hoda & Jenna (@hodaandjenna)

Hoda explains the meaning behind her daughters’ names

For Hope, she admitted: “It was such a no-brainer, it was such an easy pick.”

Referencing being with Joel at the time, and their wish of having children, she explained: “That’s what we’d been doing, was hoping, and then she came. That was just simple.”