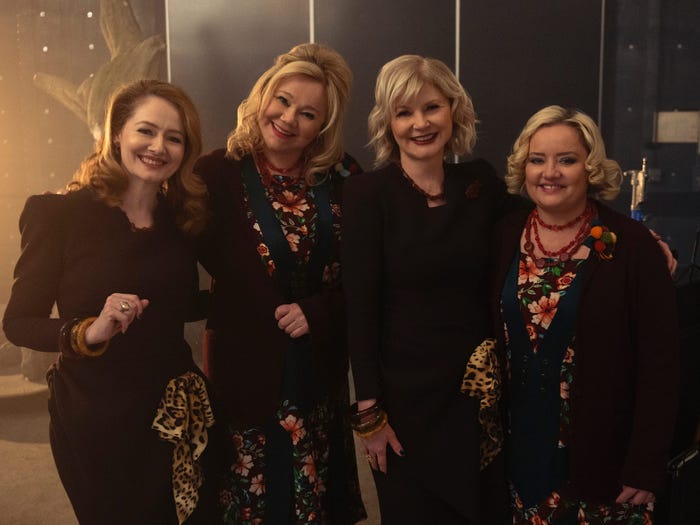 Netflix's "Chilling Adventures of Sabrina" concluded with appearances from two stars of the hit sitcom "Sabrina the Teenage Witch."

The fourth and final part of the series was released on the streaming service on Friday, directly following the events of the part three finale — in which Sabrina Spellman (Kiernan Shipka) created a time paradox and Faustus Blackwood (Richard Coyle) unleashed the Eldritch Terrors.

The show also brought back "Sabrina the Teenage Witch" stars Beth Broderick and Caroline Rhea (who portrayed Zelda and Hilda, respectively) for pivotal parts on the penultimate episode of part four. It was a surprise that was teased by Netflix earlier in December.

Here's how the original aunties from the hit sitcom returned and what happened.

Rather than merge into one Sabrina and preserve the timeline, the two witches decided to stay in separate realms. Spellman agreed to reside on Earth while Morningstar would rule as the Queen of Hell.

But just as Ambrose (Chance Perdomo) predicted, the two Sabrinas living simultaneously led to disastrous consequences that unfolded on part four, episode five, with the arrival of the fifth Eldritch Terror — the Cosmic.

The Sabrina anomaly resulted in the mortal realm, the infernal realm, and the celestial realm heading for a collision. To restore order and preserve the cosmos, two bleak options were presented: kill one of the Sabrinas or merge the two, so one entity remained.

Spellman and Morningstar didn't like either choice, but they agreed to merge.

Ambrose halted the process when three duplicate realms (infernal, mortal, and celestial) started traveling toward theirs. After learning that the probability of the merge being successful was 56%, he suggested that perhaps they could avoid a crash by sending one Sabrina from their Earth to the parallel Earth.

After Morningstar lost a game of rock, paper, scissors to Spellman, she entered a wormhole through a mirror so she could reach the other Earth and do damage control.

Morningstar encountered Broderick and Rhea when she entered the parallel Earth

Episode seven (titled "The Endless") centered on Morningstar's experience on the other Earth, as she desperately tried to put an end to the Cosmic, while also being trapped in a loop brought on by the sixth Eldritch Terror, the Endless.

On the parallel Earth, Morningstar learned that she had just joined the cast of a long-running scripted show. Except, it wasn't a random series — it was a sitcom version of "CAOS."

And on this Earth, the aunties from Spellman's world (played by Miranda Otto and Lucy Davis) were stand-ins for the Zelda and Hilda actors on the fake show.

Other familiar faces from the main Earth also appeared here, except they were cast or crew members on the fictional series.

There were several nods to 'Sabrina the Teenage Witch,' the real-life show that lasted for seven seasons between 1997 and 2003 starring Melissa Joan Hart as the titular character

There were meta jokes about Sabrina and Harvey Kinkle — aka Harbrina — being "canon." And Salem Saberhagen, the sassy talking cat from the "Sabrina the Teenage Witch," served as the head writer and star of the fictional "CAOS" show.

The addition of a talking Salem was a clever way of poking fun at the fact that the real "CAOS" series doesn't include that iconic element.

On "CAOS," Salem is a regular cat who meows and doesn't talk back.

This was done for a number of reasons. Showrunner Roberto-Aguirre Sacasa told IndieWire that he wanted to preserve his show's "horror tone," so a talking pet would interfere with that.

Plus, the show uses real animals to play Sabrina's familiar, and Shipka is allergic to cats.

Morningstar began panicking when she noticed that the Void — the eighth and final Eldritch Terror that would bring about the end of all things — was written into the script for the upcoming episode of the fictional "CAOS" sitcom.

So, she called an emergency meeting with the cast, informing them that the real Void was going to destroy everything on this Earth. But the aunties appeared suspicious during the meeting.

While filming the show the next day, Morningstar realized that they were servants of the Void, along with the other crew members.

As the Void began destroying the set of the show, the aunties in their true (and grotesque) forms chased Morningstar and killed the stand-ins for Zelda and Hilda.

Right before the servants of the Void caught up to Morningstar, she located her magic mirror and left them behind as she jumped through it to escape the parallel Earth and return home.