I’m A Celebrity: Viewers beg Nick Knowles ‘to STOP singing’ as they cringe at his gravelly vocals after his single’s chart success

He was utterly speechless on Tuesday after hearing his Adele cover topped the charts.

But many I’m A Celebrity viewers have regretted Nick’s music success, as he broke into a gravelly version of Make You Feel Me Love on Wednesday’s show.

The DIY SOS frontman left many fans pleading for him to stop singing, with Anne Hegerty later saying in the Bush Telegraph she ‘wasn’t crazy’ about the Adele track. 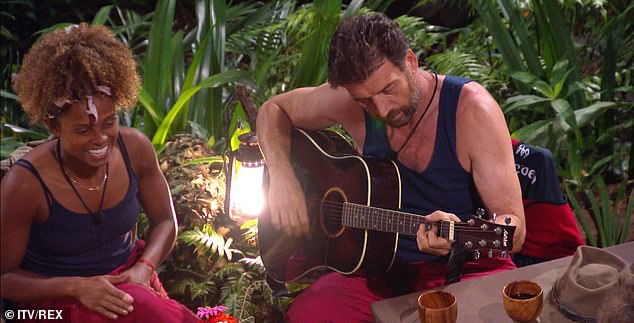 Awkward! I’m A Celebrity viewers may be regretting Nick’s music success, as he broke into a gravelly version of Make You Feel Me Love on Wednesday’s show

Following Rita Simons departure, it seemed Nick was still comprehending the fact that he had made it to Number One in iTunes music charts, thanks to a campaign by Radio X DJ Chris Moyles back in the UK.

But rather than candidly reflect in silence, the DIY SOS front-man instead broke into a gravelly rendition of Adele’s Make You Feel My Love.

Talking to James McVey he said: ‘I just felt it actually suited a deep voice and different from…’

‘Adele,’ James added while Nick continued to belt out the lyrics in camp. 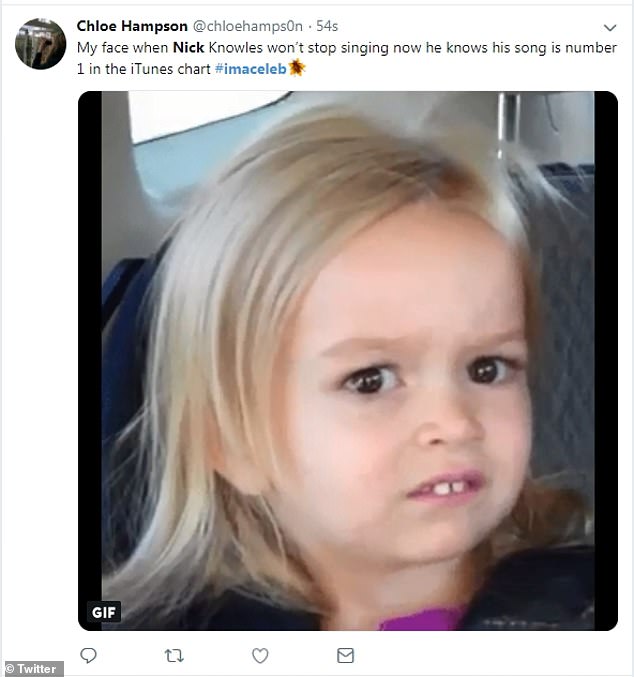 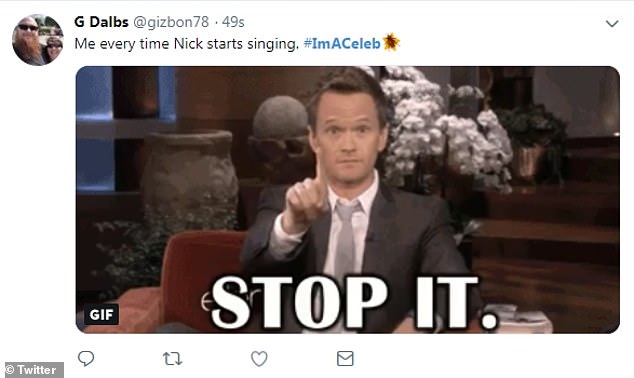 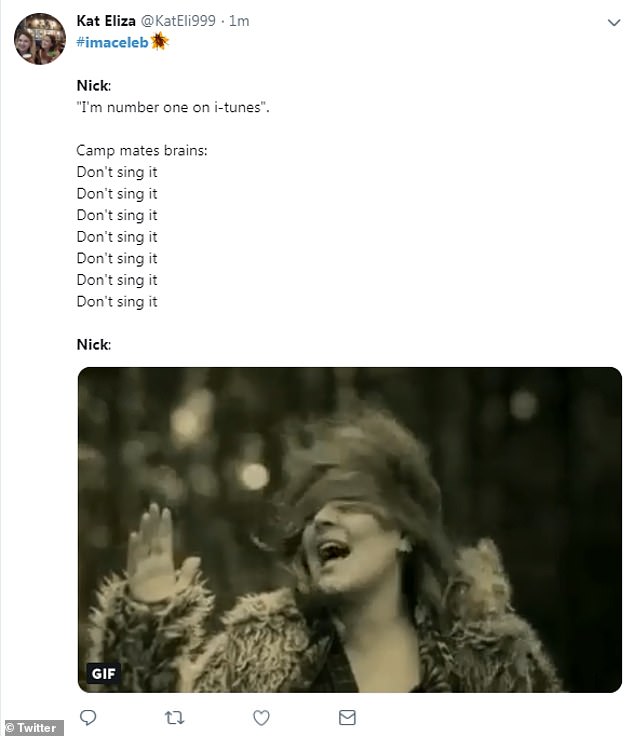 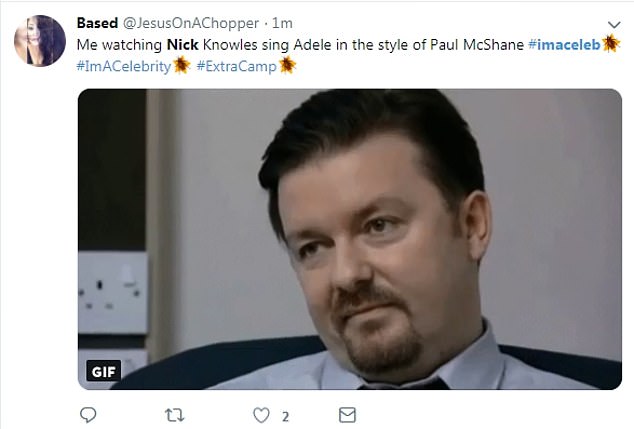 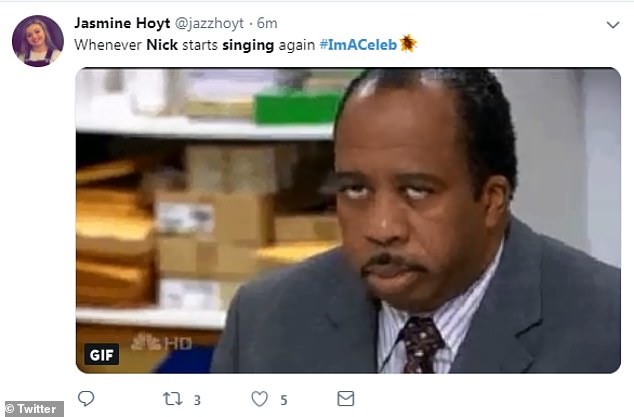 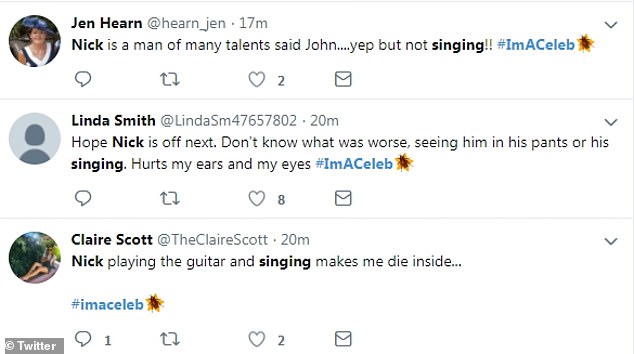 Red-faced: Many viewers took to Twitter to beg Nick to stop singing after he decided to showcase his vocal range throughout the show

Anne seemed particularly unimpressed by the song choice, saying later in the Bush Telegraph: ‘It’s not a song I’m particularly crazy about, the most recent thing I bought was Portugal the Man ‘Feel it Still’ which I thought was an excellent song.

‘If it’s made the UK charts then I’m sure I will hear it sometime because I do try and keep an ear to the charts, as a quizzer you kind of have to.’

And later in the show Nick got another chance to show off his singing skills, as he broke into the Adele hit while enjoying an evening in the jungle arms. 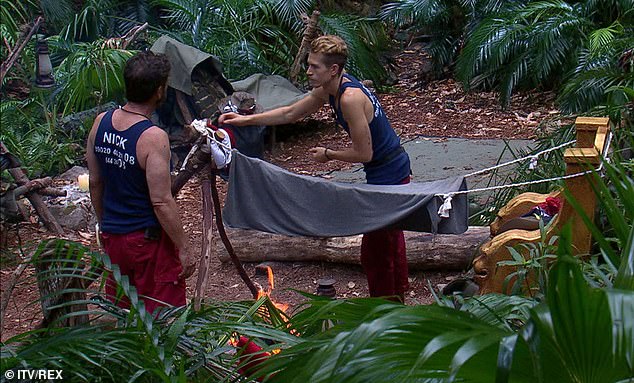 Deep: His gravelly choice for the song proved bewildering to some of the camp, with Anne saying in the Bush Telegraph it wasn’t a song she was ‘particularly crazy about’

After James McVey offered a sample of his vocals to an Oasis hit, Nick broke into song as well, and his constant singing throughout the show left many viewers covering their ears.

A third also tweeted: ‘Hope Nick is off next. Don’t know what was worse, seeing him in his pants or his singing. Hurts my ears and my eyes.’

It came in a show which saw Anne Hegerty bid a fond farewell to her campmates as she became the fifth celebrity to be voted off.

Speaking after she made her exit from camp for the final time, Anne told hosts Declan Donnelly and Holly Willoughby that she had originally quit the show mere hours after arriving in Snake Rock, but was convinced to stay by producers.

I’m A Celebrity Get Me Out Of Here continues on Thursday 6th December at 9pm on ITV. 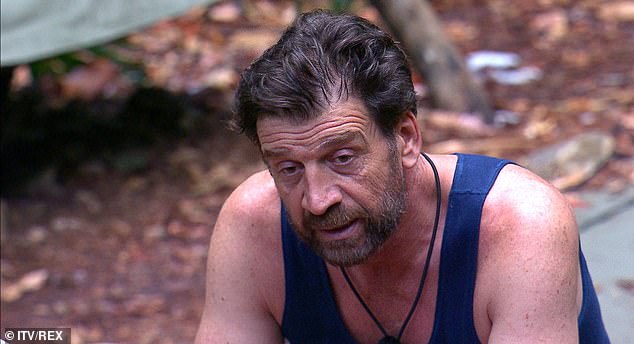 Even more? Later in the Jungle Arms Nick managed to show off even more of his singing, as he got a hold of the guitar