Is Prince Harry’s Relationship With Prince Charles Getting Better Amid Recent Events?

Prince Harry and his father, Prince Charles, haven’t exactly been on the best of terms since Harry decided to leave the UK in early 2020. Following his big move, Harry chose to share his experience living under the monarchy’s rule in a few very public forums. One being a sit-down interview with Oprah Winfrey that aired back in March. Another during an appearance on Dax Shepard’s Armchair Expert podcast, and a third by way of his very own docuseries about mental health that is available to stream on AppleTV+. The Duke of Sussex has spoken candidly about the royal family — and specifically about his father — in each of these various endeavors, and the media has reported that things between Harry and his family have been tense because of it.

In the months that followed, Harry traveled to the UK twice; once for Prince Philip’s funeral in April, and again for the Princess Diana statue unveiling, which took place at Kensington Palace on July 1. Royal watchers have been wondering if Harry spent any one-on-one time with his dad or with his older brother, Prince William, in an effort to mend the rifts that have grown over the past couple of years. Although Harry has not spoken out about the current status of these relationships, the Daily Mail has provided some insight into where Harry and Charles might stand today. Keep reading to find out more.

Did Prince Harry have dinner with Prince Charles while in London? 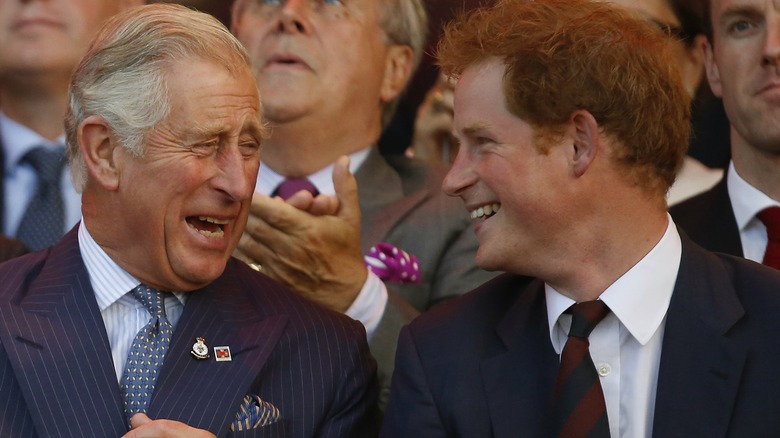 It seem that things between Prince Harry and Prince Charles may actually be in a better place than they’ve been over the past couple of years. According to the Daily Mail, Charles had planned a dinner in which he and Harry could sit down and talk privately. At the time of the statue unveiling, Charles was reportedly in Scotland. However, his supposed plan was to head back to London to share a meal with Harry before he went back to the United States. A source told the outlet that Charles was “nervous” and that he was “dreading” the meeting. However, it’s unclear if the dinner ever actually happened.

Regardless whether or not if Charles and Harry ended up getting to spend some time together, the Daily Mail points out that “the suggestion that the pair were willing to forge a plan to meet suggests at least a little thawing in relations between Harry and the rest of the [royal family].” And, if Harry and his father did not see each other during this trip, it sounds like they will be getting another opportunity to spend some time together in the fall. According to another report by the Daily Mail, Harry is expected to attend an event in honor of Princess Diana in September.