When breaking her silence by giving ‘raw facts’ about the incident in a social media post, the sister of Josh Duggar explains that it ‘happened so quickly’ and ‘was scary.’

AceShowbiz –Jana Duggar has broken her silence after she was charged with endangering the welfare of a minor. In a new social media post, the former “19 Kids and Counting” star admitted to feeling upset.

Taking to her Instagram Story on Tuesday, December 14, the sister of Josh Duggar wrote, “I’m only sharing this because the media has been having a field day with it all.” She added, “I prefer a more private life, but I know my last name means that everything we do is open to public criticism and interest, especially during this time.”

“It all happened so quickly and was scary. I am grateful for law enforcement and those who protect and serve our community,” Jana continued. In her statement, the 31-year-old stressed that she “was certainly never arrested like some may have implied.” She elaborated, “In the end I was just upset at myself that it had happened at all, but so thankful it all ended safely and that’s truly what mattered the most to me.”

Elsewhere in her social media post, Jana detailed “the raw facts” about the incident. “I was babysitting a few months ago when one of the children wandered outside alone. A passerby who saw the child called the police,” so she recalled.

“This resulted in a written citation, as well as a follow-up with child welfare who concluded that it was an accident and the child was unharmed,” Jana said. “They recognized that it was a case of a child slipping out of the house when you turn your back for a moment.” 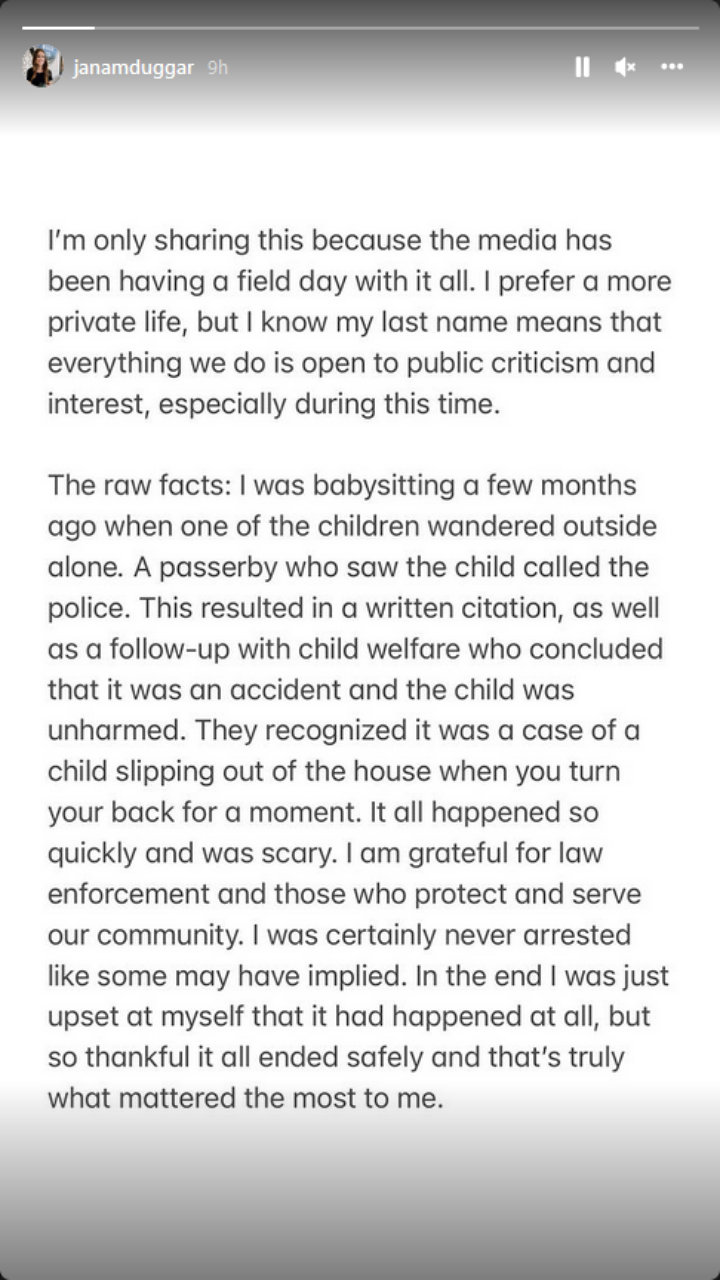 Jana Duggar broke her silence after being charged with endangering the welfare of a minor.

Prior to Jana’s statement, Jessa Duggar had spoken out about Jana’s child endangerment case. On Monday, December 13, the 29-year-old wrote in an Instagram Story about Jana’s situation. “Getting messages about headlines about Jana. Bottom line — it was an innocent mistake. She was babysitting and one of the kids slipped out the door unnoticed, but it ended safely. Could’ve happened to anyone,” she explained.

Jessa took a shot at the media as saying, “The media is sensationalizing this because of other current family circumstances, and it makes me so mad.” The “Counting On” alum continued, “She’s without question, one of the most amazing women I know, and I’d trust her with my kids any day of the week. Do me a favor — give the girl a break, and all you perfect humans go back to living your lives.”

“This couldn’t have been intentional. Thank God the child was OK and found!” Amy continued. She went on to add a supportive message to her cousin that read, “I bet you were exhausted, stressed and just emotionally worn out. Watching multiple kids is hard!”

Amy added, “Bc there’s so many of them and you only have two eyes!!” She then concluded her post, saying, “It’s a very sad situation going on and my heart goes out to @janamduggar love you.”