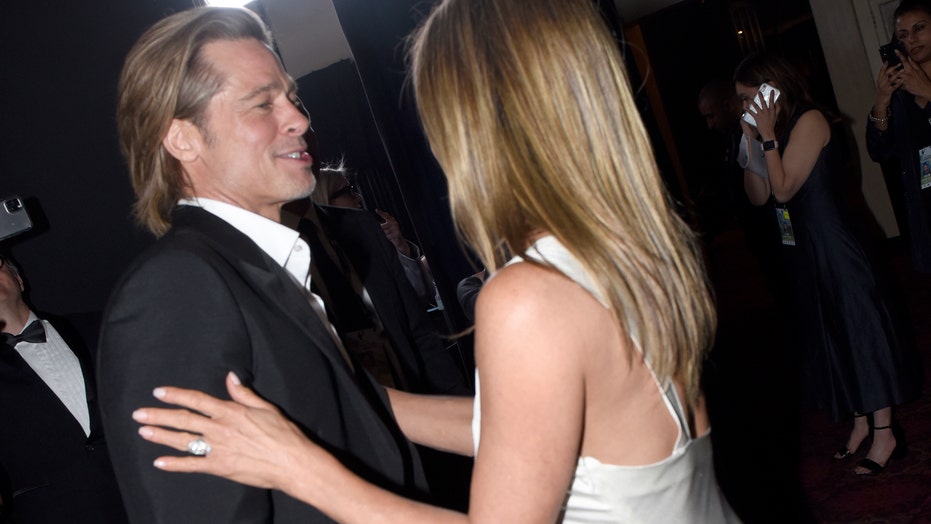 The formerly married couple further proved that there are no hard feelings between them when they both seemed genuinely elated to see the other take home a win. The responses, caught both onstage and offstage, came after the duo sparked reconciliation rumors earlier this year.

Pitt got the ball rolling when he accepted the award for outstanding performance by a male actor in a supporting role for his part as a slacker stuntman in “Once Upon a time… in Hollywood.”

“Let’s be honest, it was a difficult part,” Pitt, 56, said during his acceptance speech. “The guy who gets high, takes his shirt off and doesn’t get on with his wife. It’s a big stretch. Big.”

The camera then cut to Aniston in the crowd with a big smile on her face as she applauded him.

Soon after, she was awarded a SAG trophy of her own for outstanding performance by a female actor in a drama series for her part on “The Morning Show.” As she gave her heartfelt acceptance speech, Entertainment Tonight caught Pitt backstage dropping everything to watch his ex-wife speak via a monitor.

“Wow!” he exclaimed once he saw that she won.

The duo was then snapped backstage looking happy as ever as they reunited to talk about their respective SAG Award wins. In one photo of their backstage chat, both are smiling as Aniston speaks to her ex while touching his arms. Another photo shows him holding onto her wrist as she walks away with her hand on his chest. 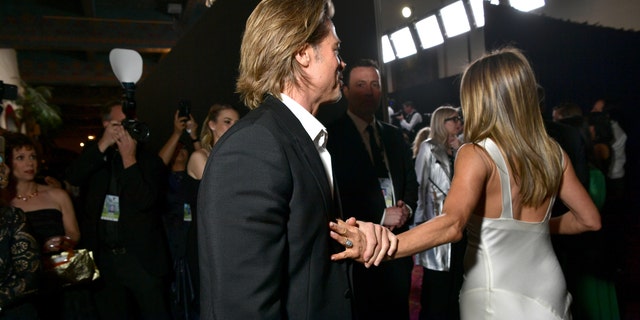 Pitt and Aniston have sparked reconciliation rumors after admitting that they’re still good friends and hang out sometimes. The 56-year-old actor even attended her 50th birthday celebration as well as her star-studded holiday party in 2019.

The somewhat flirty backstage moment did not go unnoticed by viewers, who immediately took to Twitter to share feelings of confusion, surprise and even outrage.

"This is one of the most ridiculous things to fan girl over, but I can’t help it. I need more," one user said of their backstage handhold.

"I never thought I’d root for Jennifer Aniston and Brad Pitt to get back together but…" another user joked.

"These are the pop culture moments we live and wait for! #BradPitt and #JenniferAniston supporting each other and sharing a moment at the #SAGAwards!" a third user mentioned.

"Y'all need to let this Brad pitt and Jennifer Aniston thing GO. She seems perfectly fine on her own and did we forget he CHEATED on her? Y'all have some issues," a less-enthused user noted.

"So I guess everyone is gonna act like Brad Pitt didn’t cheat on Jennifer Aniston. #SAGAwards Quote Tweet," another critical user wrote.