Joaquin Phoenix is a proud supporter of animal rights, and he’s been vegan since the late ’70s. The 2019/2020 award show season saw the actor pick up multiple awards for his role in Joker, and he used his acceptance speeches to spread awareness about racial inequality, the environment, and animal rights.

Phoenix also showed that he walks the walk too, and after picking up his SAG Award in January, he skipped the afterparties and instead headed to a pig slaughterhouse to comfort the animals there.

And while the actor wasn’t able to rescue any of the pigs at that slaughterhouse, Phoenix was recently able to save a cow and her calf from a different slaughterhouse in Los Angeles. As People reports, he then helped bring the animals to Farm Sanctuary, an American animal protection organization.

The incident took place just a day after the Oscars, and it was recorded by the sanctuary, who say the rescue wasn’t planned. Prior to the rescue, Phoenix met with Anthony Di Maria, the CEO and president of the slaughterhouse, and they had a bit of a disagreement about the slaughterhouse’s methods.

“I don’t really need any science to see with my own eyes and hear how an animal responds to pain,” Phoenix said.

“An animal will perish in less than 60 seconds—it has to. That is the most humane, human harvest process in the country,” Di Maria responded.

Phoenix then said that other slaughterhouses separate mothers from their calves, and while Di Maria reassured him that his slaughterhouse doesn’t do that, Phoenix responded by saying that all cows on the property will ultimately be “murdered.” 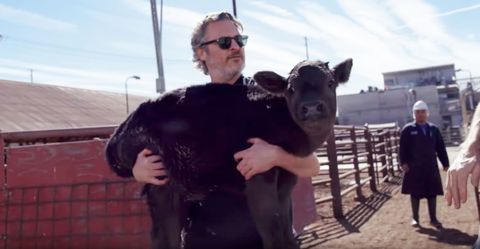 Di Maria instead referred to it as “harvesting,” and it seems like the two agreed to disagree before Di Maria took the actor on a tour of the property. Because Di Maria doesn’t believe in killing mothers and their babies, Phoenix was able to save the two animals from the slaughterhouse and take them to their new home at Farm Sanctuary.

In the video’s description box, Phoenix wrote a surprising message: “I never thought I’d find friendship in a slaughterhouse, but meeting Anthony [Di Maria] and opening my heart to his, I realize we might have more in common than we do differences. Without his act of kindness, Liberty and her baby calf, Indigo, would have met a terrible demise. Although we will continue to fight for the liberation of all animals who suffer in these oppressive systems, we must take pause to acknowledge and celebrate the victories, and the people who helped achieve them.

My hope is, as we watch baby Indigo grow up with her mom Liberty at Farm Sanctuary, that we’ll always remember that friendships can emerge in the most unexpected places; and no matter our differences, kindness and compassion should rule everything around us.”