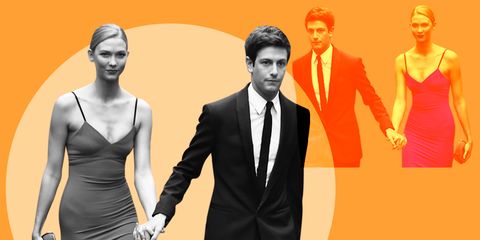 In July, Karlie Kloss announced her engagement with long-time love, Joshua Kushner. They had previously been dating for six years. While the two like to keep their relationship private—rarely every appearing together or packing on the PDA on Insta—Karlie revealed some details about her engagement, her beau, and the politics surrounding their relationship in a recent interview for Vogue‘s October issue.

And, specifically, she spoke on their political stance, given those White House in-laws: “Josh and I share a lot of the same liberal values that guide our lives and the things we stand for,” she said. They both attended the Women’s March in 2017. And while some reports claim that Josh was at the march merely “observing,” his spokesperson told Esquire that he “is a lifelong Democrat” who did not vote for Trump in November 2016.

Karlie also made it clear that she voted for Hillary during the 2016 Presidential race. She tweeted back in November 2016, “One of the greatest privileges we have as Americans is a voice. I’m proud to say I did my part, now it’s your turn. #ImWithHer“

One of the greatest privileges we have as Americans is a voice. I’m proud to say I did my part, now it’s your turn.  ? ??#ImWithHer pic.twitter.com/kJSNxLqy2u

“We’ve really grown together personally and professionally [over our relationship],” Karlie added in the interview. “Josh knows that I’m just a nerdy, curious human being. I think that’s why he loves me. We have each other’s back.”

PDA ❤️ Thank you @jr for this amazing pic.

“At the end of the day, I’ve had to make decisions based on my own moral compass—forget what the public says, forget social media,” she continued. “I’ve chosen to be with the man I love despite the complications.” Which is a very tactful way of putting it!

But that’s about all the bride-to-be was willing to reveal—when asked by Vogue, she neither confirmed nor deny rumors about her potential conversion to Orthodox Judaism (as Ivanka Trump did prior to marrying Jared). “It’s frustrating, to be honest, that the spotlight is always shifted away from my career toward my relationship,” she told Vogue.” I don’t think the same happens in conversations with men.”