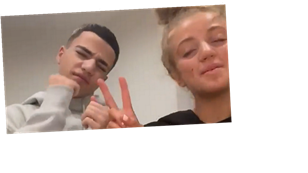 Fans of Katie Price have called her children Junior and Princess "mirror images" of herself and Peter Andre in a new video clip.

The mum-of-five, who 'had no idea £1.2m Surrey home was being sold', took to Instagram to share a TikTok clip of Junior, 15, and Princess, 13, dancing together.

In the video, the siblings are performing to Ray J's song One Wish, as Junior really gets into character by closing his eyes and waving his arms around.

Princess appeared to be embarrassed by her brother's dance moves and tried to keep her laughter in.

Proud mum Katie, 42, captioned it: "My absolute gorgeous children are so growing up @officialjunior_andre @officialprincess_andre."

The former glamour model's fans rushed to the comment section to point out how similar the pair look to their famous parents.

"Junior is his fathers son!" another expressed, while a fourth added: "Such a mix of you and Pete. Superstars in the making."

While, Katie is mum to Jett, seven, and Bunny, six, and is all loved-up with boyfriend Carl Woods.

The reality star, who has backed out of starring on Ex On The Beach, recently reminisced over her first meeting with beau Carl.

The couple decided to go back to the place where they first met, Sheesh restaurant in Chigwell, and took to Instagram to tell her followers.

Showing the outside of the restaurant, Katie gushed: "We were just saying, I remember when Carl walked up there for the first time when I was at the end table when we met."