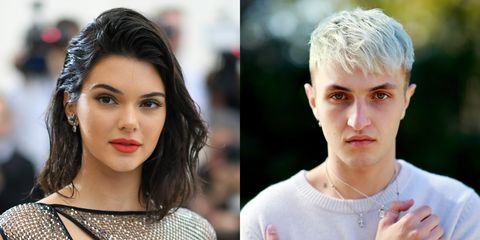 Kendall Jenner was reportedly spotted locking lips with Anwar Hadid—again. Sources told Page Six that the reality star and the younger brother of Gigi and Bella Hadid were caught kissing at a New York Fashion Week party at Cipriani in Soho on Wednesday.

“Kendall was sitting with Anwar all night and made out with him for quite some time,” an insider said. “They didn’t give a damn who saw them.” This also isn’t the first time Jenner and the youngest Hadid have been linked romantically.

Kendall and Anwar reportedly hung out last week at the Malibu Chili Cook-Off Fair with a group of friends. A source told People that Jenner “had a fun weekend” in the beach city.

“Kendall seems great,” the insider added to the site. “She’s spending time with Anwar. She obviously likes him, but both nights they were with a group of friends. She wasn’t affectionate with Anwar.”

we didn’t win anything ?

Back in June, viral photos showed Jenner and Hadid making out while out with friends after the CFDA Awards in New York.

TMZ sources said, “they were just having some fun while out with friends,” and that nothing “serious” was going on between them. The kiss went public around the time reports broke about Jenner dating NBA star Ben Simmons.

Jenner just ended things recently with Simmons after a summer-long fling. A few weeks ago, they even vacationed with Khloé Kardashian and Tristan Thompson in Mexico. At one point, it was even rumored that Jenner and Simmons were renting a house together in West Hollywood.