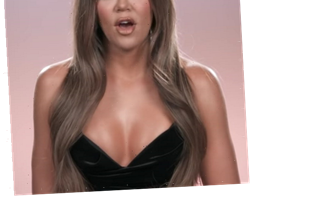 This week, Khloe Kardashian has been desperate to purge a photo of herself from the internet.

Reports have said that she did not handle the photo’s accidental posting well.

Now, Khloe has confirmed as much with a lengthy post.

Even as she acknowledges her body dysphoria, she is adamant that she has ever right to filter herself beyond recognition.

Khloe’s team has been sending copyright takedown notices left and right over a pic of her.

It was posted to Instagram … but by an assistant, and by accident.

The image was unedited, and while it showed Khloe’s incredible figure, it was too unedited and natural for her tastes.

The takedown demands have only drawn more, not less, attention to the image.

As such, Khloe took to Instagram to share looks at herself to “prove” that yes, her body really looks this good without editing.

She also posted a lengthy, heartfelt message that many fans read as a cry for help.

“Hey guys, this is me and my body unretouched and unfiltered,” Khloe began her lengthy message.

She correctly observed: “The photo that was posted this week is beautiful.”

If you sense a but coming on, you’re absolutely right.

“But as someone who has struggled with body image her whole life,” Khloe began to explain.

“When someone takes a photo of you that isn’t flattering in bad lighting or doesn’t capture your body the way it is,” she shared.

Khloe continued by noting that this is “after working so hard to get it to this point.”

“And then shares it to the world,” Khloe’s description went on.

“You should have every right to ask for it to not be shared,” she expressed.

Khloe added that this is true “regardless of who you are.”

“In truth, the pressure, constant ridicule, and judgment my entire life,” Khloe wrote.

She detailed that this was pressure “to be perfect and to meet other’s standards of how I should look.”

Khloe admitted that this “has been too much to bear.”

She continued: “‘Her dad must not be her real dad because she looks so different.'”

“‘The only way she could have lost that weight must have been from surgery,'” Khloe quoted. “Should I go on?”

“Oh but who cares how she feels because she grew up in a life of privilege,” Khloe mocked.

“She’s also on a reality show,” she went on, “so she signed up for all of this.”

Speaking as herself, Khloe emphasized: “I’m of course not asking for sympathy.”

“But I am asking to be acknowledged for being human,” Khloe stressed.

“I am not perfect,” she acknowledged.

“But,” Khloe wrote, “I promise you that I try [every day] to live my life as honestly as possible.”

“And,” Khloe continued, “with empathy and kindness”

“It doesn’t mean that I have not made mistakes,” she admitted.

“But I’m not going to lie,” Khloe continued.

Khloe confessed: “It’s almost unbearable trying to live up to the impossible standards that the public have all set for me.”

“For over a decade now in photos,” she lamented.

Khloe noted that “every single flaw and imperfection has been micro-analyzed and made fun of to the smallest detail.”

“And,” Khloe wrote of these alleged flaws, “I am reminded of them everyday by the world.”

“And when I take that criticism to use as motivation to get myself in the best shape of my life,” she noted.

“And to even help others with the same struggles,” the Revenge Body author complained.

“I am told I couldn’t have done it through hard work,” Khloe wrote grimly.

Next to genetics, wealth is the key to successful weight loss — but that doesn’t mean that it’s directly purchased from a surgeon.

“You never quite get used to being judged and pulled apart and told how unattractive one is,” Khloe wrote.

“But I will say if you hear anything enough then you will start to believe it,” she grimly noted.

“This is how I have been conditioned to feel,” Khloe explained.

Khloe detailed that she has been made to feel “that I am not beautiful enough just being me.”

“I love a good filter, good lighting, and an edit here and there,” she confessed.

Khloe claimed that it is “the same way I throw on some makeup, get my nails done, or wear a pair of heels.”

Khloe wrote that her goal is “to present myself to the world the way I want to be seen.”

“And it’s exactly what I will continue to do unapologetically,” she proclaimed.

“My body, my image,” Khloe emphasized.

“And how I choose to look and what I want to share is my choice,” Khloe insisted.

“It’s not for anyone to decide or judge what is acceptable anymore,” she noted.

Unless, of course, one of those laws requiring that filtered photos be acknowledged on social media gets passed.

“For those of you who feel the constant pressure of not ever feeling perfect enough,” Khloe addressed.

“I want you to know I see you,” she expressed.

“And,” she assured these fans and followers, “I understand.”

“[Every day] I am told by my family and friends who love me that I am beautiful,” Khloe noted.

“But I know that it needs to be believed from within,” she affirmed.

Khloe then acknowledged: “We are all unique and perfect in our own way.”

“Whichever way one chooses to be seen,” Khloe stressed.

“I have realized that we cannot continue to live life trying to fit into the perfect mold,” she wrote.

Khloe described that this is a mold “of what others have set for us.”

“Just do you and make sure your heart is happy,” Khloe advised.

That is not bad advice.

But the question is whether Khloe is doing that … or setting herself up for misery.

We cannot stress enough that, from what we’ve seen, the only person who didn’t like Khloe’s leaked photo was Khloe.

She is, we emphasize, absolutely right when it comes to her feelings on the photo.

Legally and morally, she can object to the world viewing a private, accidentally leaked photo of hers.

But that does not make this situation any less sad.

This grown woman, a successful businesswoman and a mother, compared digitally editing her face beyond recognition to makeup.

She rose to fame during a time when body-shaming was popular and even en vogue as a form of humor.

The world has thankfully moved on from that sick time, but it left its mark upon Khloe’s psyche.

No amount of digital editing can fix a wound to her heart.

But with therapy, she might one day see herself as the rest of us see her.

That said, right now, Khloe perceives any comment of her conspicuous edits as an “attack.”

Khloe, the world has changed. It’s not an attack. Your millions of fans are concerned.